In the 1980s, the average annual cost of natural disasters worldwide was $50 billion. In 2012, Superstorm Sandy met that mark in two days. As it tore through New York and New Jersey on its journey up the east coast, Sandy became the second-most expensive hurricane in American history, causing in a few hours what just a generation ago would have been a year’s worth of disaster damage.

Sandy’s huge price tag fit a trend: Natural disasters are costing more and more money. See the graph below, which shows the global tally of disaster expenses for the past 24 years. It’s courtesy of Munich Re, one of the world’s largest reinsurance companies, which maintains a widely used global loss data set. (All costs are adjusted for inflation.) 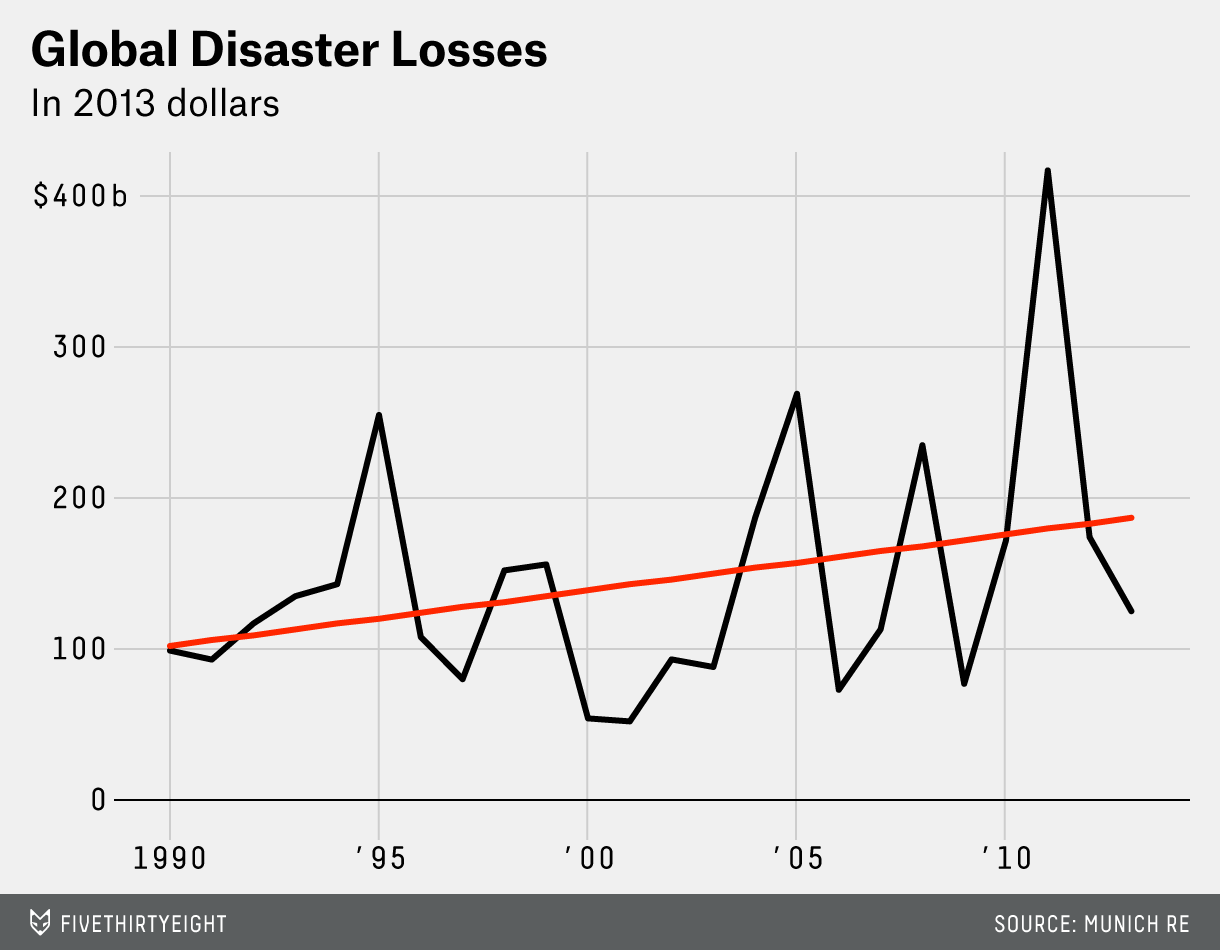 In the last two decades, natural disaster costs worldwide went from about $100 billion per year to almost twice that amount. That’s a huge problem, right? Indicative of more frequent disasters punishing communities worldwide? Perhaps the effects of climate change? Those are the questions that Congress, the World Bank and, of course, the media are asking. But all those questions have the same answer: no.

When you read that the cost of disasters is increasing, it’s tempting to think that it must be because more storms are happening. They’re not. All the apocalyptic “climate porn” in your Facebook feed is solely a function of perception. In reality, the numbers reflect more damage from catastrophes because the world is getting wealthier. We’re seeing ever-larger losses simply because we have more to lose — when an earthquake or flood occurs, more stuff gets damaged. And no matter what President Obama and British Prime Minister David Cameron say, recent costly disasters are not part of a trend driven by climate change. The data available so far strongly shows they’re just evidence of human vulnerability in the face of periodic extremes.

To identify changes in extreme weather, it’s best to look at the statistics of extreme weather. Fortunately, scientists have invested a lot of effort into looking at data on extreme weather events, and recently summarized their findings in a major United Nations climate report, the fifth in a series dating back to 1990. That report concluded that there’s little evidence of a spike in the frequency or intensity of floods, droughts, hurricanes and tornadoes. There have been more heat waves and intense precipitation, but these phenomena are not significant drivers of disaster costs. In fact, today’s climate models suggest that future changes in extremes that cause the most damage won’t be detectable in the statistics of weather (or damage) for many decades.

On Earth, extreme events don’t happen in a vacuum. Their costs are rising, sure, but so is overall wealth. When we take that graph above and measure disaster cost relative to global GDP, it changes quite a bit.1 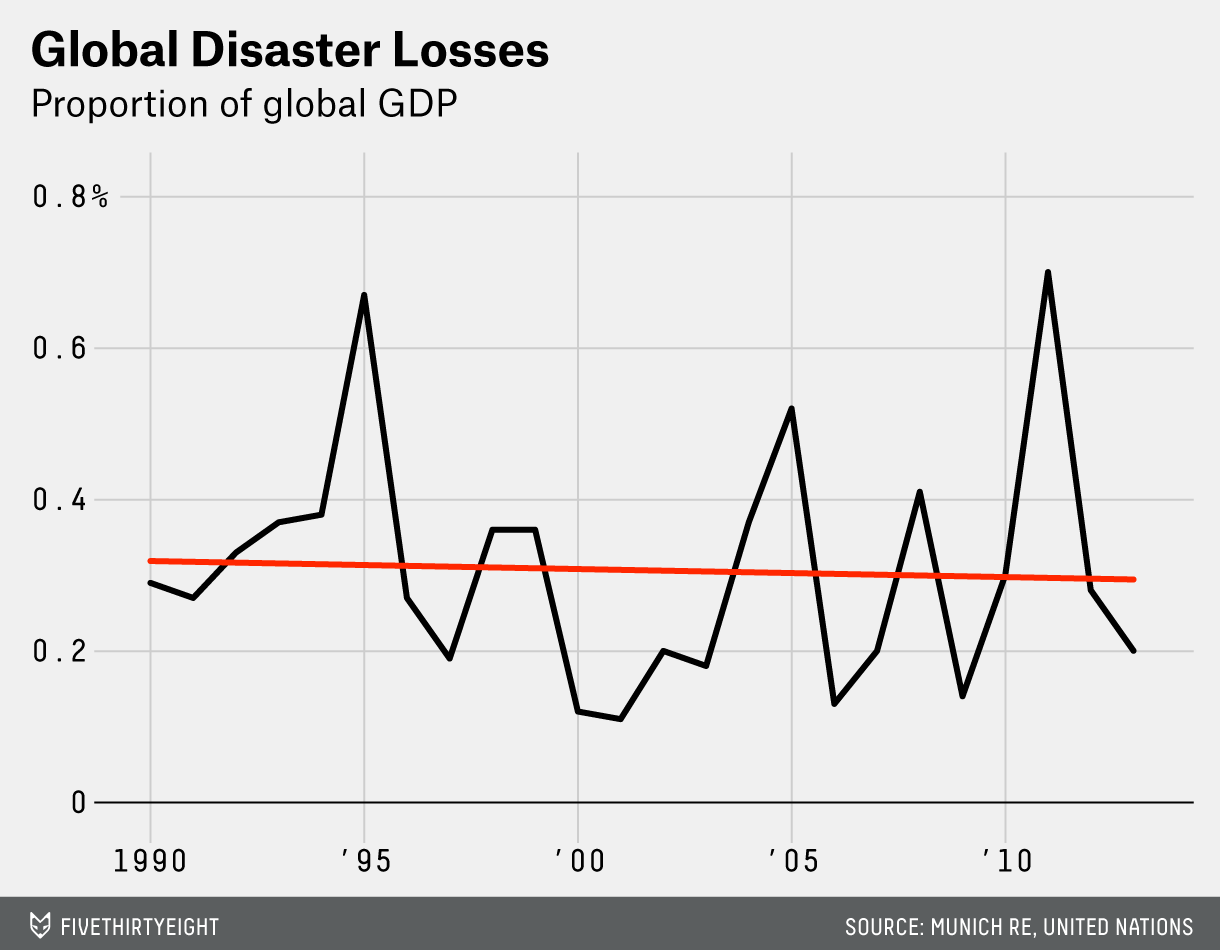 Occasionally, big disasters bring outsize costs — especially the Kobe earthquake in 1995, Hurricane Katrina in 2005 and the Honshu earthquake in 2011 — but the overall trend in disaster costs proportional to GDP since 1990 has stayed fairly level. Of course, wealthy countries hold all of the sway in worldwide cost estimates, which tips the scales when we’re looking for a “global” perspective on extreme events. U.S. hurricanes, for example, are responsible for 58 percent of the increase in the property losses in the Munich Re global dataset.

That’s just the property bill. There’s a human toll, too, and the data show an inverse relationship between lives lost and property damage: Modern disasters bring the greatest loss of life in places with the lowest property damage, and the most property damage where there’s the lowest loss of life. Consider that since 1940 in the United States 3,322 people have died in 118 hurricanes that made landfall. Last year in a poor region of the Philippines, a single storm, Typhoon Hayain, killed twice as many people.

We can start to estimate how countries may weather crises differently thanks to a 2005 analysis of historical data on global disasters. That study estimated that a nation with a $2,000 per capita average GDP — about that of Honduras — should expect more than five times the number of disaster deaths as a country like Russia, with a $14,000 per capita average GDP.2 (For comparison, the U.S. has a per capita GDP of about $52,000.)

In the 20th century, the human toll of disasters decreased dramatically, with a 92 percent reduction in deaths from the 1930s to the 2000s worldwide. Yet when the Boxing Day Tsunami struck Southeast Asia in 2004, more than 225,000 people died.

So the frequency of disasters still matters, and especially in countries that are ill-prepared for them. After 41 people died in two volcanic eruptions in Indonesia last month, a government official explained the high stakes: “We have 100 million people living in places that are prone to disasters, including volcanoes, earthquakes and floods. It’s a big challenge for the local and central governments.”

When you next hear someone tell you that worthy and useful efforts to mitigate climate change will lead to fewer natural disasters, remember these numbers and instead focus on what we can control. There is some good news to be found in the ever-mounting toll of disaster losses. As countries become richer, they are better able to deal with disasters — meaning more people are protected and fewer lose their lives. Increased property losses, it turns out, are a price worth paying.