College football teams are using tight ends more often, more prominently and in more ways, but few teams have ever had a tight end like Florida’s Kyle Pitts.

When SEC football returned on Sept. 26, Pitts dominated from the outset, catching eight passes for 170 yards and four touchdowns in the season opener. He scored eight touchdowns in his first five games before suffering a serious head injury against Georgia on Nov. 7, forcing him to miss two games. But he returned in top form Saturday with five catches for 99 yards and three touchdowns against Kentucky. His 11 touchdowns rank fourth among all receivers, and he’s rewriting the rules for college tight ends while piquing the interest of NFL teams as a prospect.

[How Do College Football Dynasties Fall?] 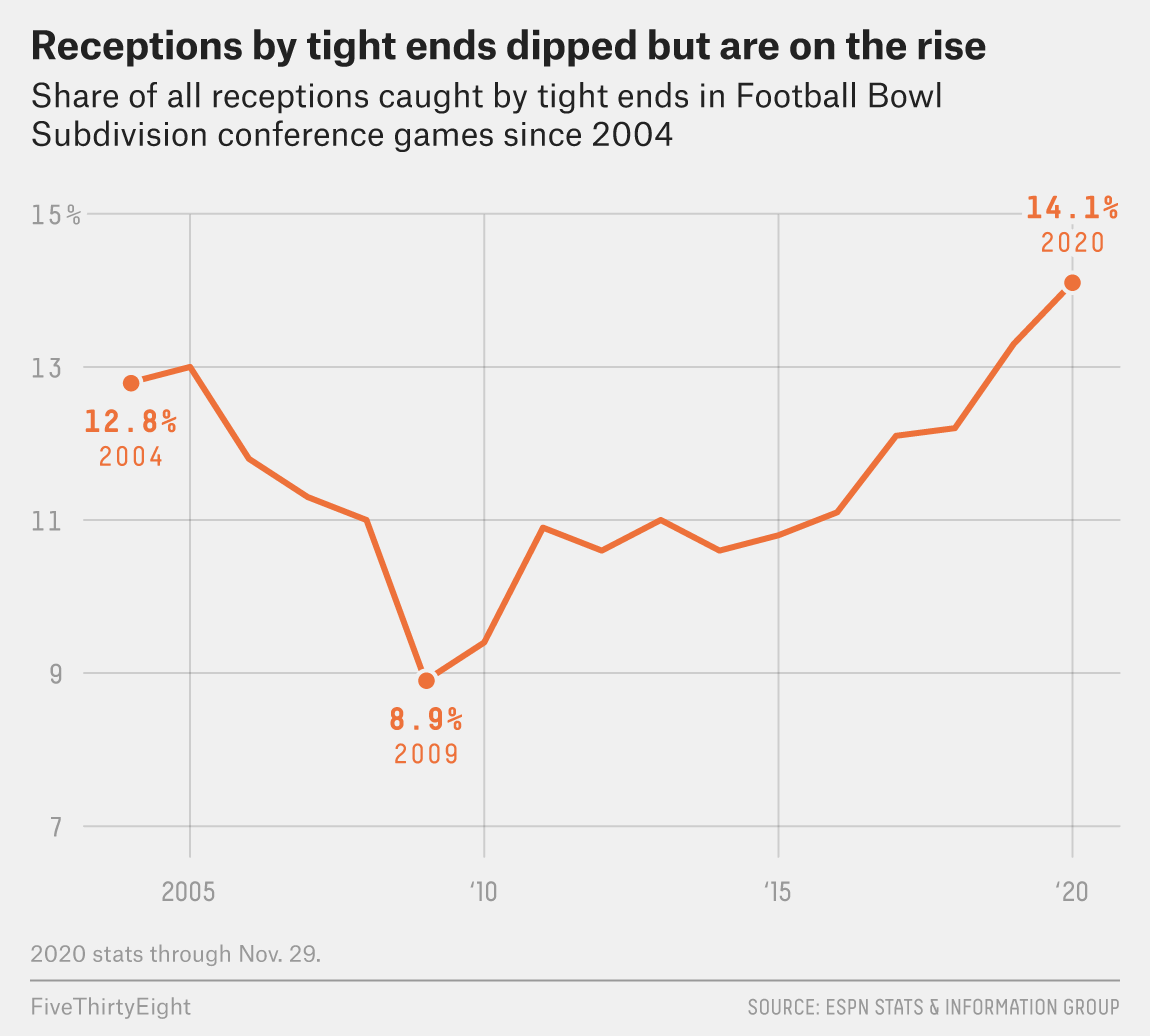 In the old-school, pro-style days of football offenses, tight ends were used as blocking machines in the I-formation, often accompanied by two pass-catching receivers, a fullback and a tailback. The usage rates indicate that the spread offenses of the late 2000s struggled to find a home for tight ends in their approaches. But tight ends have now found consistent roles as reliable pass-catchers, excelling in short-yardage situations and in scoring.2 And as tight ends have begun catching a greater share of the passes, they’ve even gotten a bit more explosive — this season, they’re averaging 11.8 yards per reception (up from 11.0 in 2011) and 8.11 air yards per target (up from 7.54 in 2011).

In six games, Pitts has smashed to pieces the old stereotype of a lumbering, blocking, red-zone target. He has 29 catches on 43 targets for 513 yards (17.7 yards per reception), and 15 of his catches have been explosive plays, or receptions gaining at least 16 yards. No tight end in at least the past 16 seasons has made such plays out of more than half of his catches in a single season.3 But Florida isn’t using Pitts as a typical tight end. He’s averaging 11.74 air yards per target, which is first among tight ends this season and the 13th-best mark in the past 10 seasons among all tight ends with at least three receptions per game and five games played.

The striking part about Pitts’s breakout opener was that he played more like a conventional tight end as recently as last season. As a sophomore, he caught 54 passes in 13 games for 649 yards and five touchdowns — the fourth-most receptions for a TE but tied for the seventh-most yards. He didn’t provide much of a deep threat, averaging an ordinary 9.35 air yards per target.

It was only this year, when his team unleashed his ability in the downfield passing game, that Florida’s offense reached its potential. The Gators rank eighth in the country in yards per play this season (among teams with more than two games in the books), improving from 16th last season, 27th in 2018 and 100th in 2017. Coach Dan Mullen has focused on utilizing athletes like Pitts more on offense. “We know he’s a mismatch out there on the field,” Mullen told reporters. “… That’s something we certainly spent a lot of time with in the offseason, that we have enough ways that he’s going to get the ball in his hands during the course of the game trying to create matchup problems for the defense.” With that high-flying offense in tow, Florida is 7-1 on the season and in the driver’s seat in the SEC East race.

[Alabama Is Winning With Its Offense, Thanks To Mac Jones]

The NFL remains bullish on tight ends, but when college football de-emphasized them, they started falling down draft boards. At least one tight end went in the first round of the first 11 drafts this century, but only two went in the first round over the next six drafts, from 2011 to 2016. But as NFL offenses become more diverse, they define themselves with “mismatches,” as Mullen described them. The top pro offenses, as in last year’s two Super Bowl contenders, have traditional wide receivers but also playmaking athletes like Tyreek Hill and Deebo Samuel. At 6-foot-6 and 246 pounds with the speed to finish a 71-yard touchdown catch, Pitts could be a versatile target at the next level, which is why ESPN’s Todd McShay ranks him 11th among 2021 draft prospects and Dane Brugler of The Athletic lists him 15th.

Until then, a record-breaking college season is still in Pitts’s sights, remarkable given that Florida is playing only 10 regular-season games and facing only SEC opponents, and that Pitts missed two games. The FBS record for touchdown catches by a tight end in a single season is 18, set by Utah’s Dennis Smith in 12 games in the 1989 season. Pitts caught 11 in his first six games, and he could go on to play nine, 10 or even 11. But even if he doesn’t set a new record, Pitts’s season puts him in rare company, and the advanced metrics show that he’s unlike any other tight end in college football. “He’s kind of a unicorn, right?” Mullen said. That may be — unless another college team comes along and decides to find itself another Kyle Pitts.