One of the most important matchups in Super Bowl LIV will be between Kansas City’s speedster wide receiver, Tyreek Hill, and San Francisco’s second-team All-Pro cornerback, Richard Sherman. How the Chiefs choose to attack Sherman, and how the Niners respond to that game plan, will be crucial early in Miami, and the effects from those decisions seem likely to be felt throughout the game.

Perhaps the most predictable part of the Hill-vs.-Sherman matchup is that Sherman will almost certainly line up on the right side of the field (from the perspective of the offense).1 During the regular season and so far in the postseason, Sherman has lined up out wide almost exclusively on the right. Sherman has lined up in the left slot four times but his flirtations with that half of the field have been dwarfed by the 840 snaps on the outside right. His presence has had a chilling effect on offenses. With Sherman on patrol, teams have tended to avoid the right side of the field. 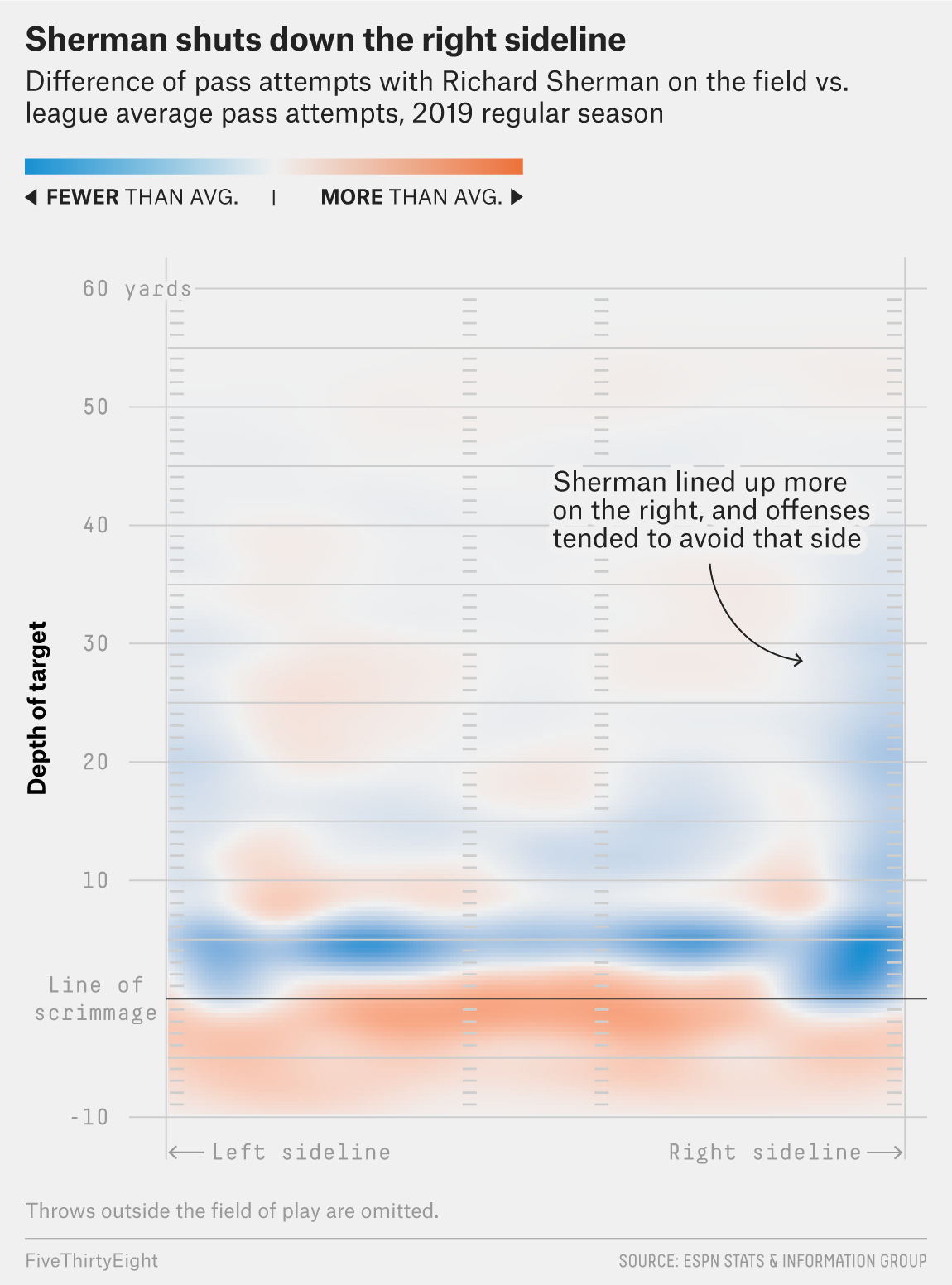 Opposing teams have targeted Sherman as the primary defender 56 times during the regular season and playoffs. His average depth of target at the time of a throw was 12.2 yards, slightly above the league average of 11.7 for defensive backs, indicating that when teams do pass against Sherman, it’s further downfield. In the regular season, he led the Niners with three interceptions and 11 pass break-ups, and he’s added to that in the playoffs with two more of each.

Meanwhile, Tyreek Hill was often targeted on the right side of the field, though he is a deep threat all over the field. Hill’s heatmap shows that he is targeted more than the league average at most horizontal areas of the field 20 yards or deeper, and he’s caught 3.6 receptions over expected on those deep balls, according to Next Gen Stats. His overall average depth of target leads the Chiefs at 12.9 yards. That number comes close to where other teams have been attacking Sherman. 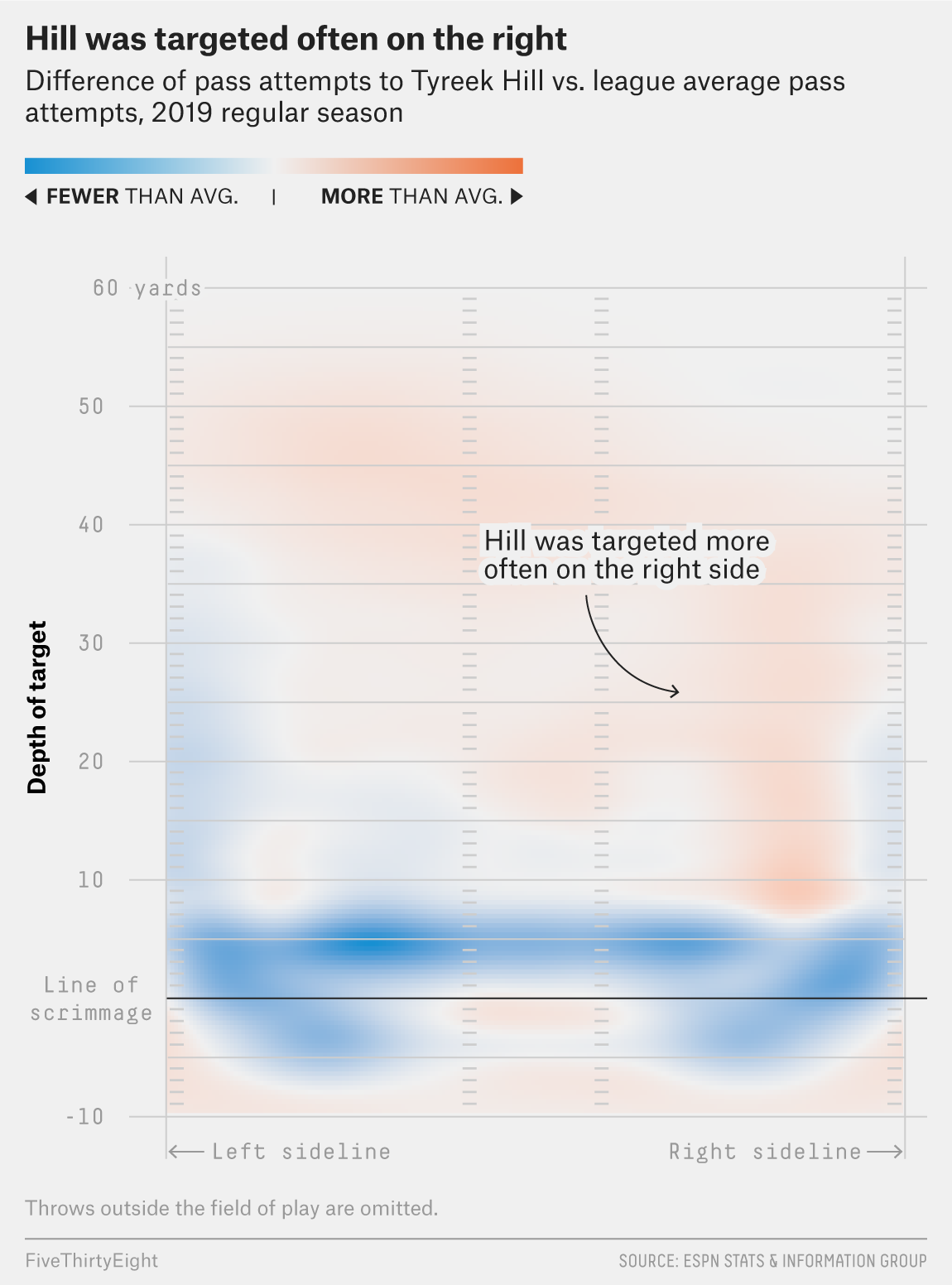 The 49ers may end up hurt by a lack of deception with their coverage scheme. The Chiefs know where Sherman will likely be, so if they want to avoid Sherman by sending Mecole Hardman or Sammy Watkins to Sherman’s side, they can confidently build that into their game plan. Likewise, if they decide to ask Hill to take on Sherman, there’s no mystery about which side of the field to find him.

It’s unlikely that Sherman can match Hill in a footrace, so Sherman will probably give him an ample cushion in their Cover 3 and Quarters schemes — one that Hill could exploit with comeback routes. Or Sherman’s respect for Hill’s speed could free up the seams underneath for tight end Travis Kelce.

Hill and Kelce are tied for second on Kansas City in terms of yards per route run at 2.38. Their numbers reflect an offense that can operate effectively through the air with either player. The deep threat of Hill should open up opportunities for Kelce, and those shorter, more efficient throws over the middle could also help mitigate San Francisco’s dangerous pass rush — which, led by rookie defensive end Nick Bosa, was fifth in sacks during the regular season.

The FiveThirtyEight projections think that Kansas City is a 3.5-point favorite and give the Chiefs a 63 percent chance of hoisting the Lombardi. If the Niners hope to win, they’ll need strong answers for the problems presented by Hill and the opportunities his presence affords his teammates.

How this Super Bowl compares to others in the past