The income of the median U.S. household was $51,900 in 2013, the Census Bureau reported Tuesday. That’s essentially unchanged from 2012, after adjusting for inflation, and is 8 percent lower than in 2007, before the recession began. Median income hasn’t shown a statistically significant increase since the recession ended in 2009. 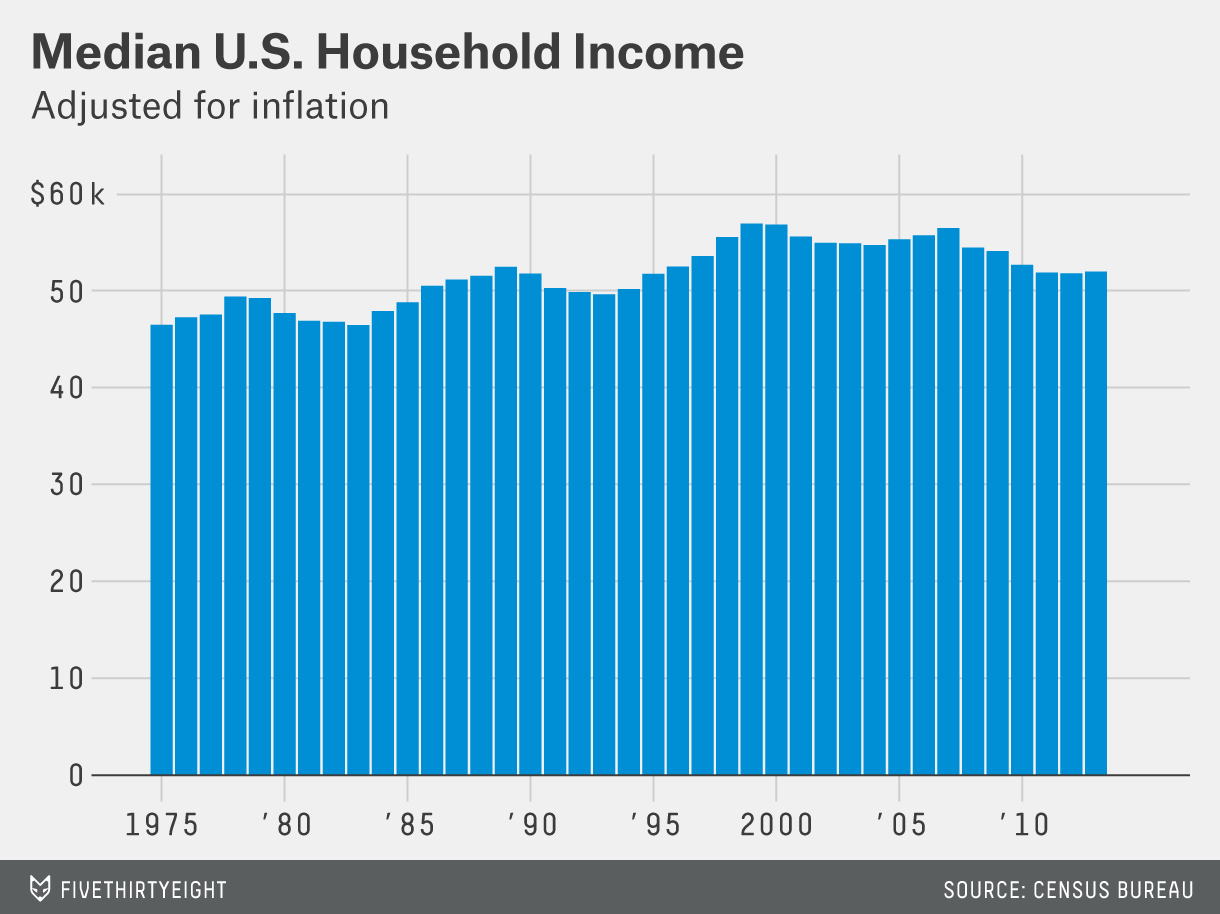 Median income is an imperfect measure of financial well-being. The government’s official measure ignores noncash benefits, such as food stamps, and after-tax benefits, such as the Earned Income Tax Credit. Moreover, it doesn’t account for demographic changes, such as the aging of the population and the shrinking of the typical household. Adjusting for those changes would probably show at least some improvement in income, especially over the longer term.

Still, Tuesday’s report makes clear how little progress the American middle class has made — not just over the past few years, but over recent decades. Median household income was lower in 2013 than in 1989 and is 8.7 percent below its 1999 peak.

The pain hasn’t been shared equally. The average income of the bottom fifth of earners has fallen 16 percent since 1999, compared to 2 percent for the richest fifth. The top 20 percent of earners accounted for 51 percent of all income in 2013, unchanged from 2012 and up slightly from 49.4 percent in 1999. The “gini index,” a measure of income inequality in which 0 represents perfect equality and 1 represents perfect inequality, was essentially unchanged in 2013 at 0.476. But it remains high by historical standards. 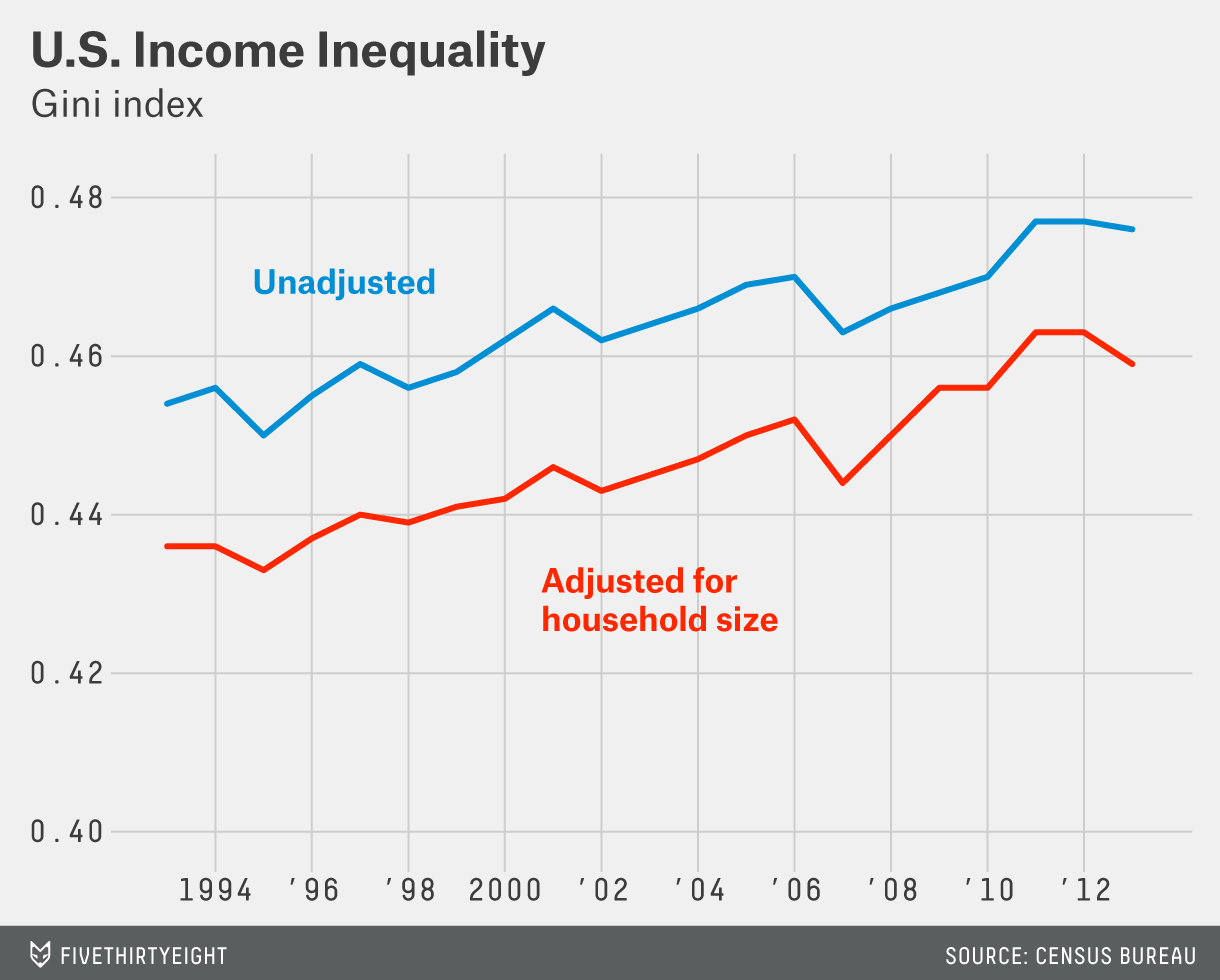 Tuesday’s report did have glimmers of progress. The official poverty rate fell to 14.5 percent from 15 percent, and the child poverty rate fell for the first time since 2000. More people, and especially more men, worked full time in 2013. And fewer people went without health insurance.

Here are a few other interesting data points from Tuesday’s report:

Young, old see gains: The weak recovery has hit young people especially hard; the unemployment rate for Americans younger than 25 is still 13 percent, more than double the 6.1 percent for the population as a whole. But the “lost generation” may at last be seeing some gains. Americans ages 15 to 24 saw their household income rise 10.5 percent in 2013, the biggest increase for any group, though they are still earning 4 percent less than before the recession. Those 65 and older, meanwhile, saw their incomes rise 3.7 percent. No other age group saw statistically significant income gains.

But young people’s gains come with an important caveat: Household income figures are based on the age of the “householder.” So-called boomerang children, 20-somethings living in their parents’ basements because they can’t find good jobs don’t count as their own households and thus are left out of those numbers. (Their income still counts, but it’s part of their parents’ household income.) Still, even looking at individual income, rather than household income, young people saw modest progress; their median individual income rose 2.7 percent, faster than any other age group.

Pay gap narrows: Women working full time, year-round earned 78 cents for every dollar men made in 2013. The Census Bureau’s measure of the gender pay gap is crude, ignoring differences in hours worked, education, industry and numerous other factors. (Even adjusting for those factors, however, the pay gap is larger than zero by almost every calculation.) Still, while the exact number may not be meaningful, the trend is significant. The pay gap, which had been stuck at 77 cents on the dollar for nearly a decade, narrowed by a penny in 2013, the first change since 2004. The shift was due to rising earnings for women, not falling earnings for men.

Big racial gaps remain: The median income of an African-American household was $34,600 in 2013, more than 40 percent less than the median non-Hispanic white household. The race gap has been little changed in recent years. It peaked at about 45 percent in the 1980s and narrowed to 35 percent in 2000, but has since lost much of that ground. More than a quarter of blacks live below the official poverty line, compared to 10 percent of whites.

Hispanics, however, saw modest income gains in 2013, though their $41,000 median household income is still about 39 percent less than whites’ and their poverty rate, at 23.5 percent, is far higher. Asians had the highest median income of any racial group, at $67,000.

An imperfect poverty measure: Tuesday’s report included data on Americans living beneath the official poverty line, which in 2013 was about $15,162 for a family of two. But economists widely regard the official poverty rate as misleading. It ignores benefits that keep millions of people out of poverty and fails to account for regional variations in the cost of living, among other significant weaknesses. An alternative measure, which is seen as more accurate, won’t be released until next month. Last year’s alternative measure showed overall poverty was higher than the official measure indicated, but lower among children.

Lots more data: The Census Bureau released far more data Tuesday than it included in its main report. Dozens of tables break down income by age, sex, education, marital status and other factors, and a separate widget allows users to create their own tables. And there’s more to come: On Thursday, the Census Bureau will release results from the 2013 American Community Survey, which will provide a detailed look at demographics and earnings by state and local area. We’ll have more for you as we dig through it all.