To the surprise of no one, the Federal Reserve announced Wednesday afternoon that it would continue to trim its monthly bond purchases by another $10 billion per month. But the real news is the release of its quarterly forecasts on economic growth, inflation and unemployment.

After an unexpectedly bad first quarter, the Fed thinks the economy has already started to rebound.

Mostly because of that bad first quarter, the Fed slashed this year’s growth forecast by seven-tenths of a percentage point from its previous projections in March, to just over 2 percent. Its forecast for inflation, which has ticked up in recent months, was nudged higher. And the expected unemployment rate this year was lowered a bit.

Chairwoman Janet Yellen’s post-report news conference was closely watched for signs that the Fed would move forward the date it will raise interest rates, which have been near zero for more than five years. Markets expect the first rate increase to come sometime in 2015, as do a majority of members of the Federal Open Market Committee (FOMC), the Fed’s main policy-setting body.

Incoming data will largely determine the Fed’s policy actions, so here is a rundown of the indicators to watch, along with the new Fed forecasts:

We’ve gotten some weak data for the first quarter over the past few weeks. The U.S. economy shrunk in the first three months of 2014 at a 1 percent annual rate, according to the most recent Bureau of Economic Analysis report on real gross domestic product growth. And economists expect that contraction to be revised even lower, perhaps to nearly -2 percent, according to Goldman Sachs.

But the bulk of the responsibility for this decline in growth was unusually harsh winter weather. Businesses also didn’t do much inventory restocking. Both those trends usually reverse themselves over time.

The Fed lowered the “central tendency” — a summary of the forecasts by individual FOMC members after trimming the outliers — for its growth projection by seven-tenths of a percentage point since its previous forecast in March: from a range of 2.8 to 3 percent to one of 2.1 to 2.3 percent. Real GDP growth in 2015 and 2016, however, remained unchanged — the Fed expects the economy to hum along once we’re out of 2014. 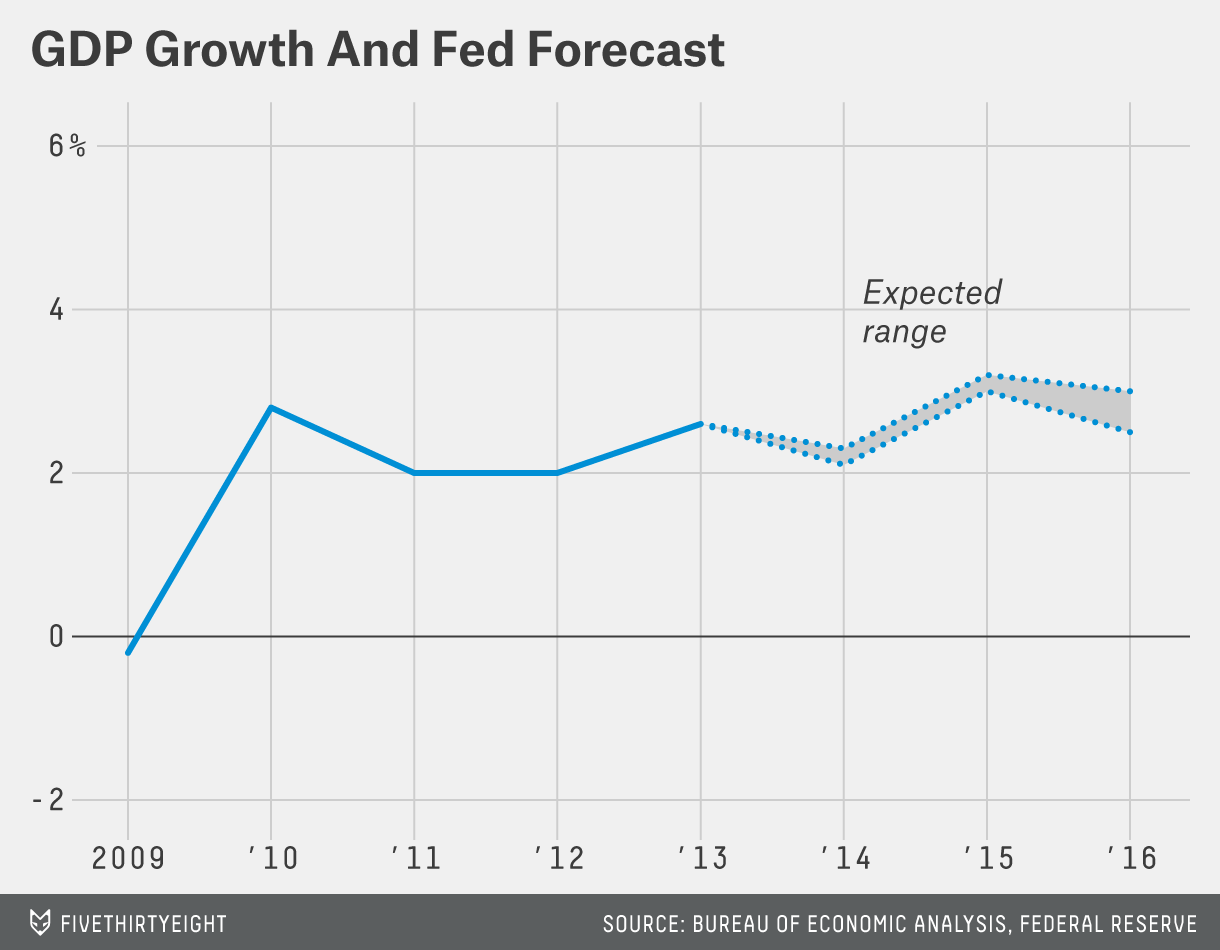 For the past several months, various measures of inflation have been coming in under the Fed’s 2 percent inflation target. But those trends changed recently; inflation may be bottoming out and may soon tick upward.

The Fed’s preferred inflation measure — the personal consumption expenditures (PCE) index — is rising by 1.6 percent year over year, a turnaround from very low readings reported earlier this year. And the Fed projections for PCE inflation in 2014 ticked up just a bit, to a range of 1.5 to 1.7 percent — still well below its 2 percent target. 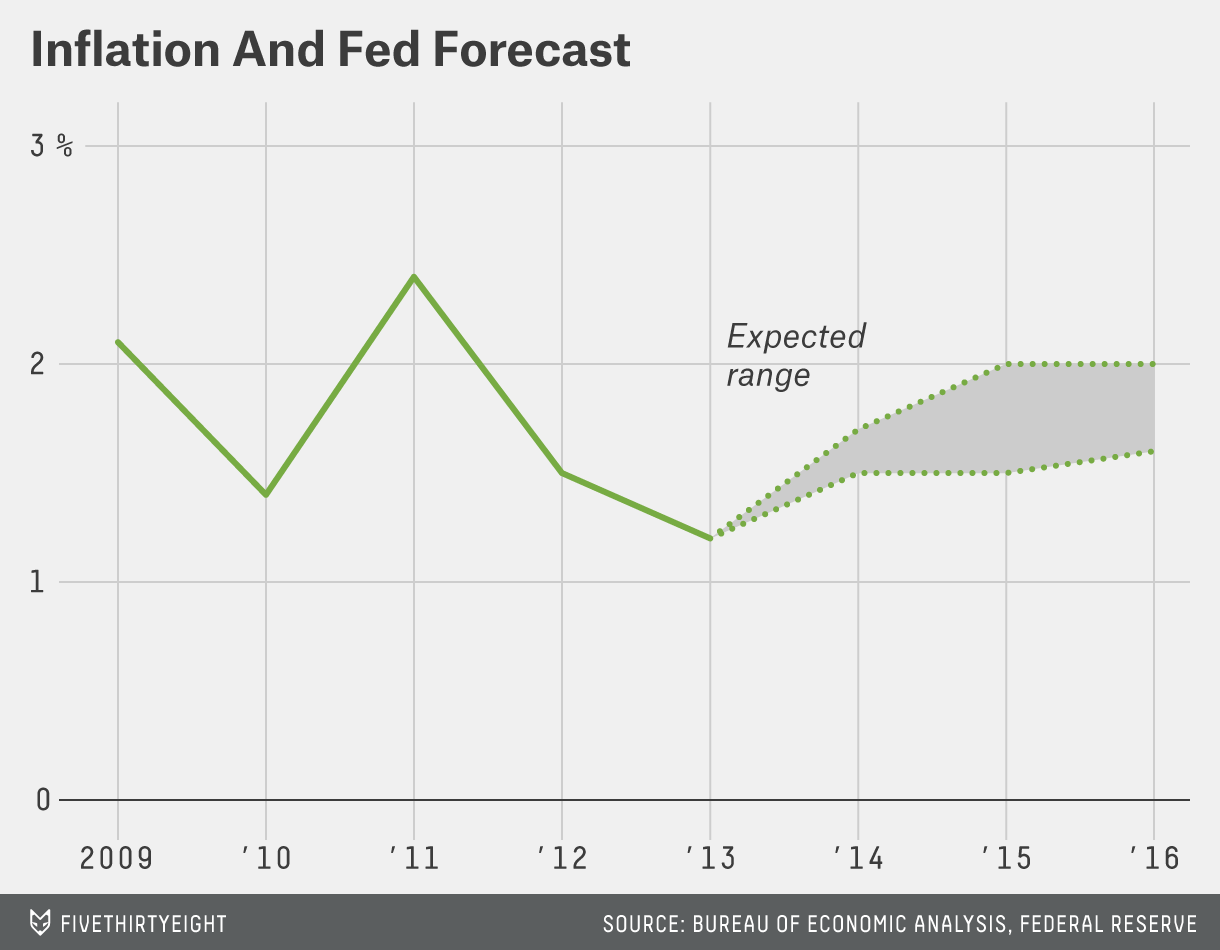 The more well-known consumer price index is up by 2.1 percent from a year earlier, the highest rate since October 2012 and a level Yellen said was “on the high side” at her news conference.

A falling unemployment rate — down to 6.3 percent in May 2014 from 7.5 percent a year before — has given the Fed cover for shrinking its bond-buying program. But a falling unemployment rate and a string of stronger jobs reports masks some fragility in the labor market, with labor force participation trending down and the numbers of long-term unemployed still high. FOMC members will continue to debate the amount of “slack” in the labor market (as I wrote about during the Fed news conference in March). 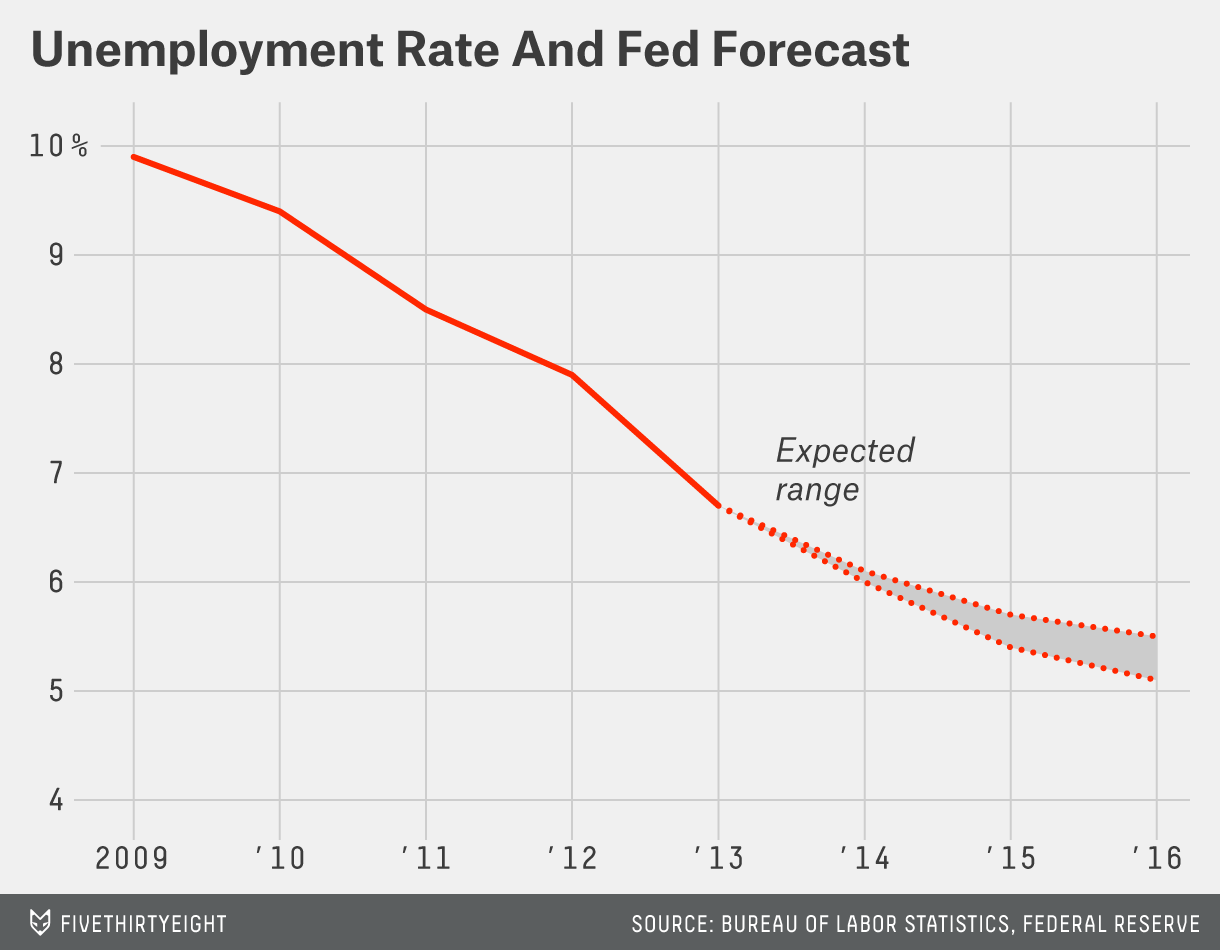