The popular prediction market Intrade, which in November shut down its markets to United States residents after a complaint from the Commodity Futures Trading Commission, announced on Sunday that it was closing down entirely.

I’m less interested in speculating upon the business or legal reasons for Intrade’s shutdown than in pressing a simple point: billions will still be wagered on the outcome of the 2016 elections, with or without Intrade in place.

Some of this is because there are other betting markets and bookmakers who offer odds on the election. Several of these sites are already taking bets on the identity of the 2016 Republican presidential nominee, for instance, along with any number of other races. Most of these sites are not open to Americans. But they tended to perform more rationally than Intrade over the course of the 2012 campaign, with their prices more closely tracking polls, prediction models and news events.

The billions I’m referring to, however, will be wagered somewhere else: Wall Street. Consider what happened to a series of stocks on Nov. 7 of last year, the day after Barack Obama won the election. 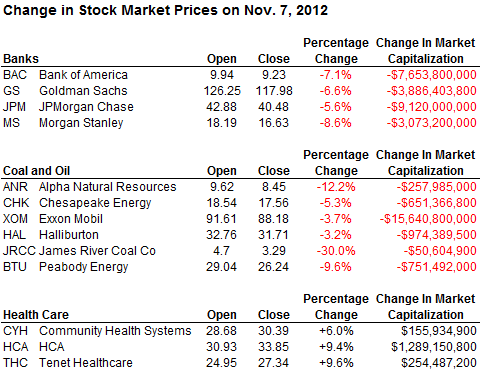 Four large banking stocks — Bank of America, Goldman Sachs, JPMorgan Chase and Morgan Stanley – declined by an average of 7 percent on Nov. 7 as investors speculated that another term for Mr. Obama would provide a less favorable regulatory environment than one under Mitt Romney. Collectively, these stocks lost about $24 billion in market value on Nov. 7.

Similarly, a series of coal and oil stocks were off by anywhere from 3 percent to 30 percent on Nov. 7, and lost a collective $18 billion in market value.

A few industries benefited from Mr. Obama’s victory, however. The health care provider H.C.A., which should serve more hospital patients now that Mr. Obama’s health care bill is likely to remain in place, saw its stock rise by 9 percent the day after the election, adding $1.3 billion in market value.

In industries like these, the amount of money changing hands in response to political events far dwarfs anything that took place on Intrade, where trading volumes were measured in millions rather than billions of dollars.

Betting on the election by means of buying or shorting common stocks can be a tricky endeavor, of course, since it requires investors to subject themselves to other risks associated with owning these stocks that might have little to do with the election outcome.

It might be possible to hedge some of these risks – for instance, if you thought that Mr. Romney was going to win the election, but weren’t especially optimistic about the stock market over all, you could buy up oil and banking stocks while shorting the Standard & Poor’s 500-stock index. But these would entail some transaction costs and some portfolio risk.

For most traders, however, political outcomes are more of a nuisance. Stock market investors in industries like banking, health care, energy and telecommunications that are heavily subject to the federal regulatory environment essentially can’t avoid betting on election and legislative outcomes, whether they want to or not.

Some of the value in having fully licensed and legal political betting markets that are open to American customers would be in allowing investors to hedge these risks more efficiently. In the meantime, there should be plenty of alternatives to Intrade in 2016.