The Tommy John epidemic shows no signs of slowing down, and all those injuries — especially those suffered by starters — have worn pitching staffs down to a nub. Lose 200 quality innings and the consequences can be far-reaching and painful: subpar pitchers asked to patch the rotation, overtaxed bullpens collapsing from the strain of excessive workloads.

Those injuries have exacerbated a problem many teams face — a lack of pitching depth, specifically lousy options for the fifth starter’s role. Although that job often gets short shrift, the reality is that No. 5 starters are needed almost as often as No. 1 starters over the course of the season. Add up all the days off in April and a handful later in the season and you might squeeze three or four more starts out of your ace than your worst guy over 162 games. Skimp on your fifth starter, and it could come back to bite you.

Think about some of the pitchers who’ve been asked to man the SP5 job for wannabe contenders recently. The Seattle Mariners opened the vault to sign Robinson Cano over the winter, then nabbed Corey Hart and Logan Morrison for good measure, hoping to beef up an iffy offense. But they neglected to address the back end of their rotation, banking on both James Paxton and Taijuan Walker to make an instant impact as rookies rather than pursuing a veteran like Ervin Santana to provide bulk innings while easing prospects into the rotation. The Mariners couldn’t have anticipated immediate injuries to both Paxton and Walker. And they are hanging on the edge of contention so far this year.1 Still, it’s fair to wonder how much better off they’d be if they’d signed one more legitimate pitcher, rather than wasting starts on terrible options like Brandon Maurer and Erasmo Ramirez.

When teams aren’t asking too much of kids, they’re handing the SP5 gig to veteran flotsam. Coming off their first playoff berth in more than two decades, the Pittsburgh Pirates let their top right-handed starter, A.J. Burnett, leave for Philadelphia, without even tendering a qualifying offer that would have netted a compensatory draft pick. With Burnett gone, everyone else in the rotation moved up a slot, creating an opening for the fifth-starter job. For that role, the Pirates grabbed Edinson Volquez, a pitcher so bad he led the league in walks in 2012, then became the king of earned runs allowed in 2013, yielding 108 in just 170.1 innings. Volquez has slashed his walk rate this year to a career low, but he’s made up for it by leading the National League in wild pitches, while serving up 10 homers in just 60.2 innings.

The Los Angeles Angels would have begged for that kind of only-somewhat-terrible performance last year. The Halos gave Joe Blanton a two-year, $15 million deal before the start of the 2013 season, after watching him give up 86 homers over the previous three years while pitching in the lower-offense environment of the National League. Their reward was a 6.04 ERA (and a 2-14 record, if you care about that kind of thing) in 2013. The Angels released Blanton this spring rather than suffer through another year of bombardment. Blanton retired last month, meaning his former team must pay him $8.5 million to watch him take wind-surfing lessons.

Call it lack of available talent, a lack of attention to the job, or both, but too many teams with legitimate playoff aspirations have fallen into the black hole of awful fifth starters. That got us thinking: How important is a good SP5 to a team’s (regular-season) success?

Using data from Retrosheet, we identified fifth starters for teams going back to 1980.2 We used that season because by that point just about every team had abandoned the four-man rotation and gone to five starters instead. We then tested fifth starters by wins above replacement to see how much (if any) effect they had on team success, using run differential,3 above and beyond 2 WAR SP5s leading to two team wins, 3 WAR SP5s being worth three, and so on.

That first batch of results showed about what we would expect given the standard formula for converting runs to wins. Every Baseball Reference win above replacement (rWAR) generated by a fifth starter added about nine runs of differential per 162 games, while every FanGraphs win above replacement (fWAR) added about 12 runs per 162 games. In this test, it took about 0.8 rWAR for a team to be expected to break even on run differential, and about 1.1 fWAR to break even. That means the WAR quality of a fifth starter at the beginning of the season is pretty much worth its face value, assuming the typical formula of 10 runs equal one win.4

Perhaps this shouldn’t be too surprising. Last month we tested another theory using similar parameters, asking the question: Which is the best approach to building a team, stars and scrubs, or roster-wide balance? Then, as now, we found that when using individual players’ WAR to measure team-wide performance, a win is a win.

Still, we wanted to take another run at the question. Maybe having a reliable workhorse at the end of the rotation provides specific benefits for the bullpen. If a team’s relievers don’t have to bail out a weak starter in the fourth or fifth inning every five days, that could allow them to stay fresh throughout the season.

To test that theory, we looked at the relationship between bullpen OPS+ allowed (the only league-adjusted pitching stat Baseball Reference’s split finder delivers) and both flavors of SP5 WAR. Here again, the statistical relationship was so weak that it was essentially nonexistent.

OK, let’s test one more theory here. Maybe having a really good fifth starter has an effect greater than we’d expect from a simple WAR calculation, one that ripples through a roster and can push a team closer to the postseason. 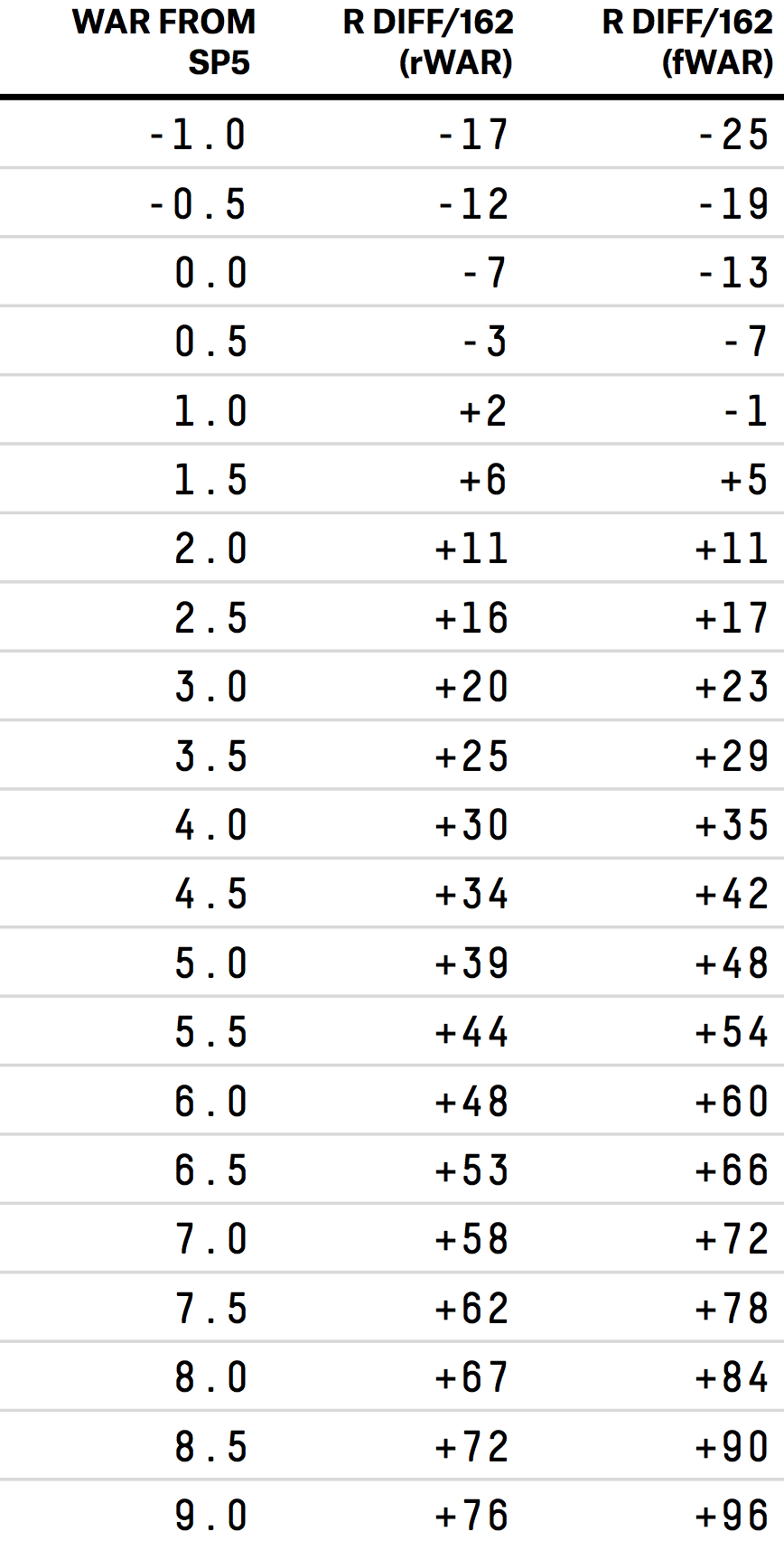 Eureka! We found something. If the average SP5 is a 1 WAR guy, then a 6 WAR fifth starter should be adding five more wins than the typical SP5. Instead, we found that he improves his team’s run differential by 60 runs, the equivalent of six more wins. We can see the progression in the table at right. (We focused on fWAR because the finding was more dramatic than when we used rWAR.)

Now, any pitcher racking up 6 WAR is a rare feat, good enough to get considered in Cy Young voting and thus exceedingly rare for a fifth starter. Below is a rundown of some of the fifth starters who’ve proven especially valuable to their teams since 1980. Also included is runs per game differential, which shows whether certain pitchers contributed more than their raw WAR figures might suggest.

Tommy Greene remains the only pitcher to have thrown a no-hitter with either of us in attendance at the ballpark, so his outsize influence on the NL pennant-winning 1993 Phillies was a fun find. Many of the other big runs-per-game-gap creators played for excellent teams, too: Cory Lidle on the 102-win 2001 Oakland A’s; El Duque on the 103-win 2002 New York Yankees; and Bronson Arroyo on the 86-year-curse-breaking 2004 Boston Red Sox.

One particularly successful team this year has reaped an excellent performance from its fifth starter. As I wrote in this week’s edition of my column “The 30” at Grantland:

Ryan Vogelsong’s season was a raging disaster through his first four starts. He’d rolled up a 7.71 ERA, with five homers and 24 hits allowed in 16⅓ innings pitched. He’s been a different pitcher since, changing his pitch mix significantly and reaping masterful results. In his past six starts, he’s given up just six earned runs, good for a 1.35 ERA and an opponents’ batting line of .191/.253/.234. Some of that is thanks to an easier schedule that has included two starts against a Braves team that’s second to last in baseball in runs scored and one at AT&T Park against a Marlins team that’s hit poorly on the road. Still, let’s give credit where credit’s due: Vogelsong was out of the majors entirely for half a decade before improbably resurrecting his career, and while last season appeared to burst his bubble, his numbers this year are almost identical to what he did in 2011 and 2012. This might not be a fluke.

We’ll want to wait a full season to see how Vogelsong pitches from here, and if the San Francisco Giants get one of those Arroyo-on-the-idiots seasons. The early signs are encouraging. The Giants’ bullpen ranks second in park- and league-adjusted ERA, fourth in adjusted xFIP, and in the middle of the pack in innings pitched — a nod to their relievers’ talent, but maybe also to the benefits of starters who can soak up solid innings and save the pen from getting burned out. Vogelsong’s hot streak coinciding with the Giants winning 23 of their past 32 games and seizing the best record in all of baseball doesn’t hurt the case for quality fifth starters either.