A study released this week finding that three Ebola-infected air travelers could be leaving the three affected West African countries each month based its estimate on some big assumptions.

Tweak those assumptions, as the researchers did in the appendix to their Lancet article, and the numbers change significantly.

Take the case of Guinea. The researchers estimated it would take, on average, 2.7 months for one Ebola-infected person to leave the country — if air travel were at the levels it was at the end of last year. Factor in the restrictions to air travel because of Ebola fears, and it would take eight months. In other words, there would be about a 50 percent chance of someone infected with Ebola flying out of Guinea between the start of September and the end of the year.

But according to the appendix, if the real case burden is 10 times the reported level, and air travel isn’t restricted, then about 15 people would fly out during that period. Switch instead to an exponential growth rate in number of Ebola cases, and 45 infected people would leave the country by plane between September and December. 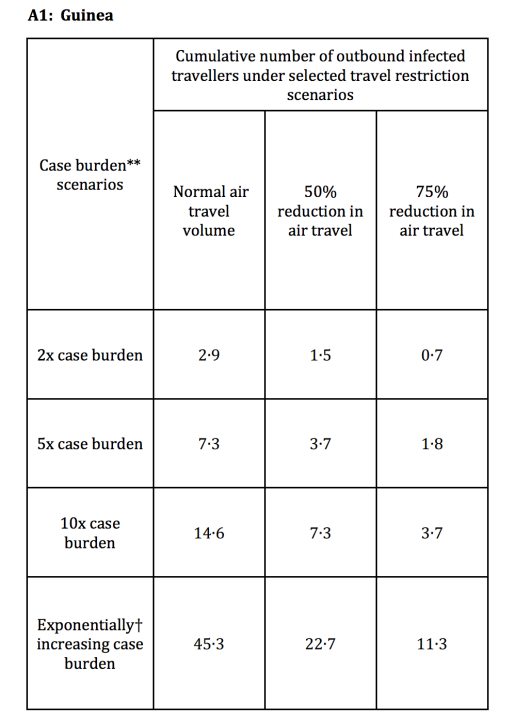 One assumption the researchers didn’t change in the appendix is that all people in each country have an equal chance of flying — whether or not they have Ebola. “I don’t know how realistic that is,” Andreas Handel, an assistant professor in the department of epidemiology and biostatistics at the University of Georgia’s College of Public Health, said in an email. He pointed out that the ability to fly internationally is likely to be correlated with better sanitation and access to health services. “All of these uncertainties make me very hesitant to attach too much meaning to any specific number,” Handel said.

Kamran Khan, lead author of the Lancet study, said he and his colleagues had no data to assume otherwise. “We highlight this as an important limitation in our manuscript,” Khan, an infectious diseases specialist at the University of Toronto, said in an email. He and his co-authors point out in the paper that visiting health-care workers have both a higher chance of infection and of being able to fly internationally than do most residents of Guinea, Liberia and Sierra Leone.

Although the estimate of three infected travelers per month is what made headlines, the paper also includes other interesting data on Ebola and air travel, such as the projected share of traveler volume from the three affected countries to various worldwide destinations (2 percent to the U.S.).

And the report isn’t alone in making big assumptions to project the spread of the Ebola epidemic. Researchers from the U.S. Centers for Disease Control and Prevention, for instance, made many assumptions in projecting 1.4 million worldwide Ebola cases by late January. Calculations during the outbreak, with limited and incomplete data, will necessarily be approximations.

Whether the true number is three infected air travelers per month or not, Khan said, a travel ban isn’t a solution. “The most proactive and preventative way to decrease the risk of international spread would be to decrease the number of new infections in West Africa,” he said. “Travel bans wouldn’t address the root cause of the problem and could compromise the international community’s ability to manage the outbreak in West Africa, which ultimately should be the top priority.” Exit screening travelers for Ebola symptoms is more sensible, he and his co-authors wrote in the paper.

The paper’s estimates also don’t translate into a significant chance of catching Ebola while flying, even at the upper end of the range, according to other researchers. “The chance of sitting next to an infected person would be greatest on a flight originating in Liberia, Sierra Leone and Guinea, but even there it would be very unlikely,” Benjamin Neuman, a virologist at the University of Reading in Britain, said in an email.

“I didn’t try to crunch the numbers, but I would venture a guess that currently the overall risk of getting and dying from Influenza while on a flight from NYC to London are probably higher than getting and dying from Ebola during such a flight,” Handel said. “That could of course change if things get worse and we don’t get the situation under control soon.”