On Sept. 19, Thomas Eric Duncan boarded a flight in Monrovia, Liberia, possibly after having lied on a screening questionnaire about his contact with persons carrying the Ebola virus. The next day, Duncan arrived in Dallas to visit his fiancée and son. Initially complaining of a fever, Duncan would soon become the first person in the United States diagnosed with Ebola. Before dying of the disease on Oct. 8, Duncan would transmit it to two nurses, Nina Pham and Amber Vinson, who treated him at Dallas Presbyterian Hospital.

Duncan’s case has sparked calls to ban flights to the United States from the countries hardest hit by the recent Ebola outbreak — Liberia, Guinea and Sierra Leone — possibly along with others in West Africa. While some of these arguments have been measured, others seem to convey the impression there are thousands of passengers arriving in cities like Dallas each day from flights originating in these countries.

There aren’t. We searched on Kayak.com, ExpertFlyer.com and airline websites for direct flights from West African nations (as the United Nations defines the region) to destinations outside the African continent. Specifically, we looked for flights available for the week from Jan. 2 to Jan. 8, 2015, a time period far enough in advance that such flights are unlikely to have sold out.

There are no regularly scheduled direct flights to the U.S. from Liberia, Guinea or Sierra Leone — and very few from other countries in West Africa. There are far more flights from West Africa to Western Europe instead. Duncan’s case was typical. Before arriving in the United States, he connected through Brussels.

Here are all the routes we identified: 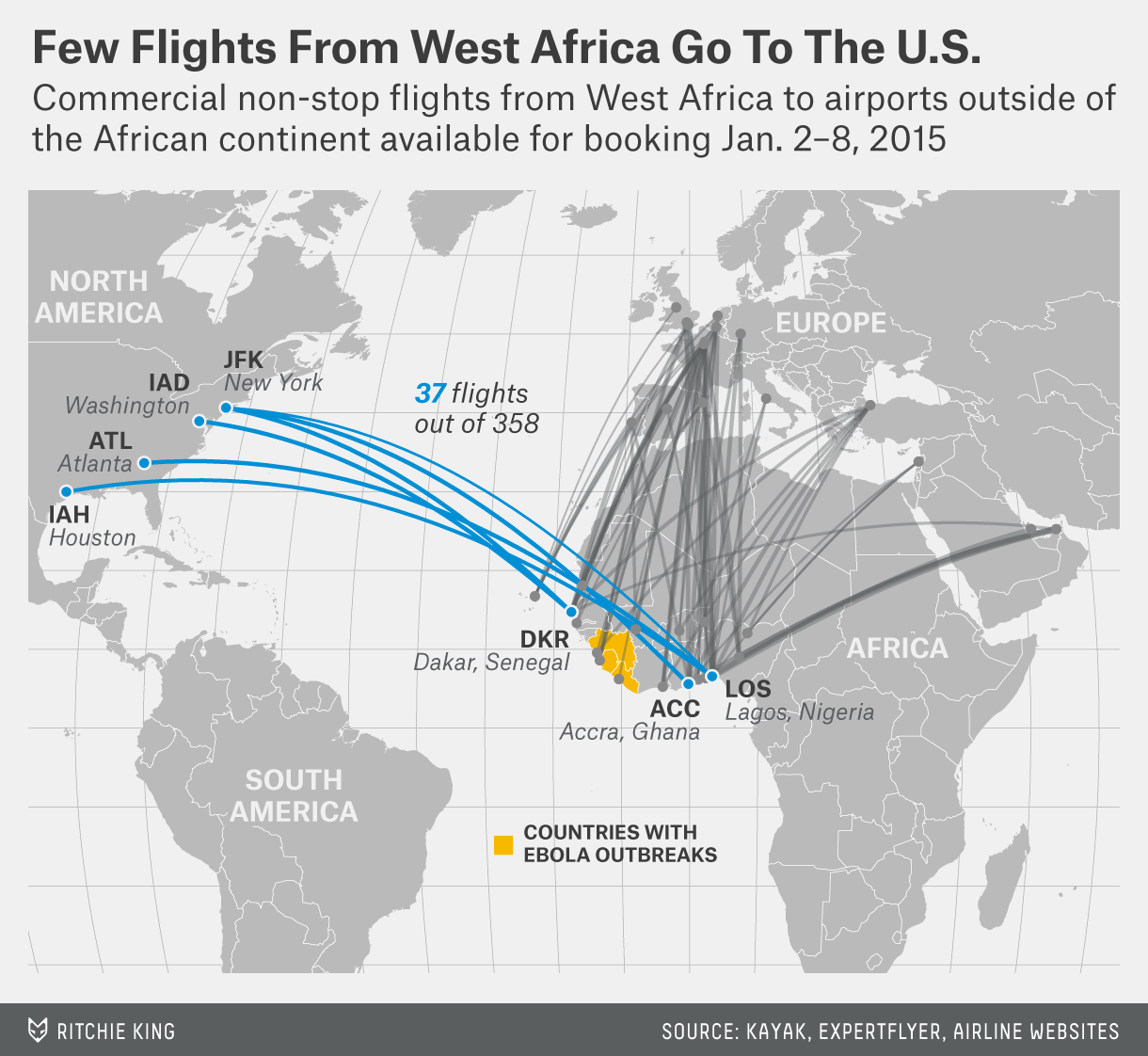 Our search may be missing a few flights here and there, but it ought to be reasonably comprehensive, especially for travel to and from the United States. We found a total of 358 direct flights available for booking that week. Of these, only 37 were to the U.S. They include the following six routes:

By contrast, there are hundreds of flights per week to Western Europe from these countries. Paris is the top destination, with a total of 79 flights per week (counting flights on one route that is currently suspended but which may become available again by January). London has 43 weekly flights (again, counting one suspended route). Brussels and Frankfurt have 26 each. 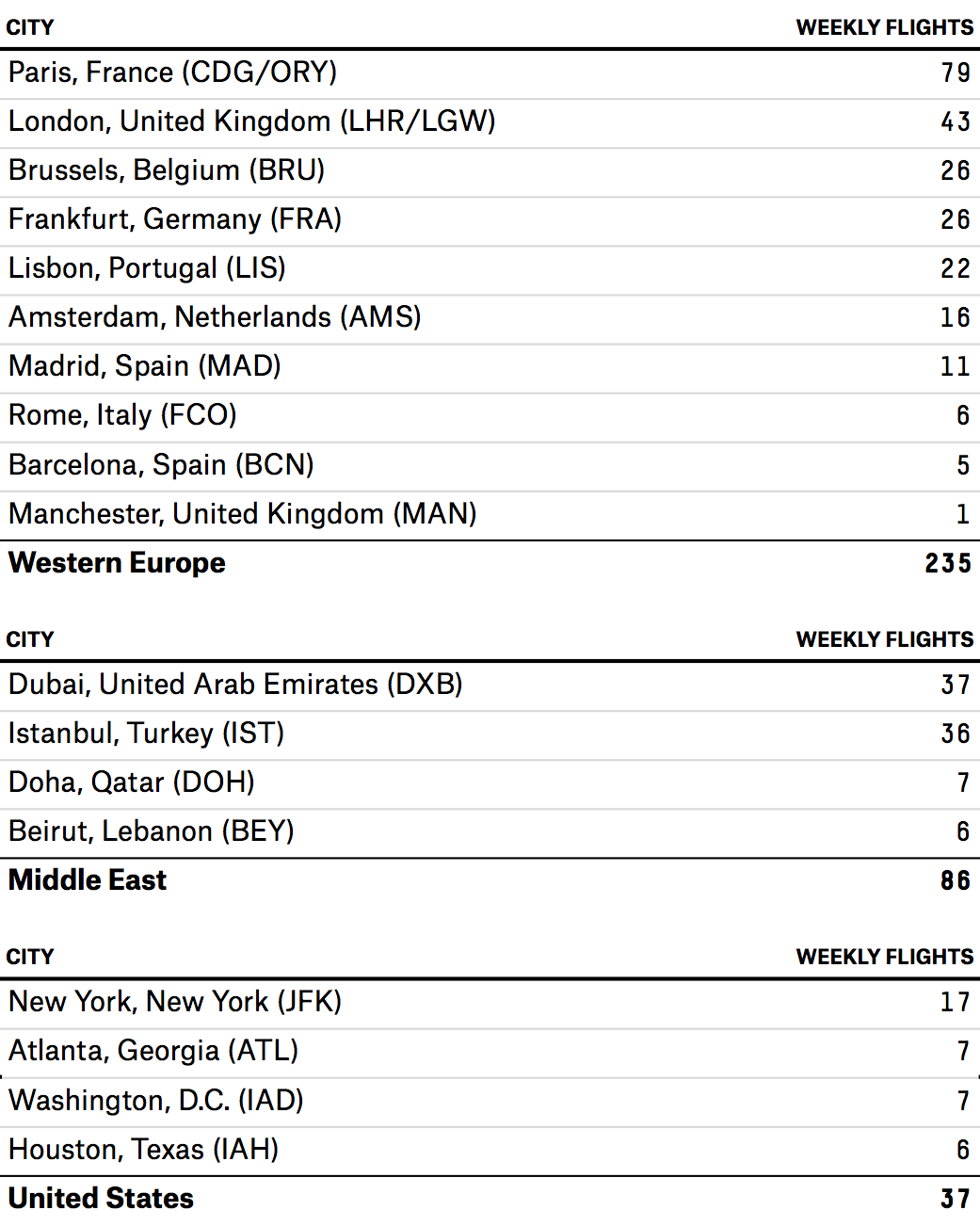 All of those cities, of course, offer abundant connections to the United States. There are about 280 flights each week from London to New York alone, and thousands more involving other transatlantic city pairs.

A traveler from West Africa could also connect through the Middle East. There are as many flights to Dubai from the region each week (37) as there are to the United States, along with regular connections to Istanbul, Doha and Beirut.

However, of the flights from West Africa to Europe and the Middle East, relatively few are from the worst-stricken countries. The flight from Monrovia to Brussels that Duncan boarded was the only transcontinental flight we could find from Liberia. There are flights to Brussels and London’s Gatwick Airport from Freetown, Sierra Leone, but flights to Paris and London-Heathrow have been suspended. Paris is the only non-African destination with a direct flight available from Conakry, Guinea, according to our search, although Turkish Airlines has announced plans to begin service to Istanbul from there soon.

In total, this represents just 18 weekly flights from Liberia, Guinea and Sierra Leone combined, nine of which are currently suspended or are not yet operating. Many of the passengers from these countries are probably connecting through busier airports like Lagos or Dakar before taking the next step on their journey.

Some of the proposals for a travel ban have suggested denying boarding to passengers on the basis of their nationality, rather than the specific route they’re flying. That might or might not be a wise thing to do, considering the epidemiological, economic and ethical implications. But for a ban to be even halfway effective, it would need to be much more sweeping than banning the handful of direct flights from West Africa to the United States. It seems unlikely that travel from Europe or the Middle East will be halted. But the next Ebola patient may be on a flight from London, not Liberia.