It’s been a week since Iowa voted, and we have few national polls to help us understand just how much the caucus results — messy though they were — have affected the attitudes of potential Democratic primary voters around the country. But today Quinnipiac University released a national survey conducted entirely after Iowa voted, and it found a new polling front-runner: Sen. Bernie Sanders, who led the field with 25 percent support.

Former Vice President Joe Biden, meanwhile, fell nine points since Quinnipiac last conducted a national survey in late January. This is the first time Sanders has led in a national Quinnipiac survey during the 2020 cycle. As you can see in our national polling average, the gap between Biden and Sanders is shrinking, too — they’re essentially tied at 22 percent. 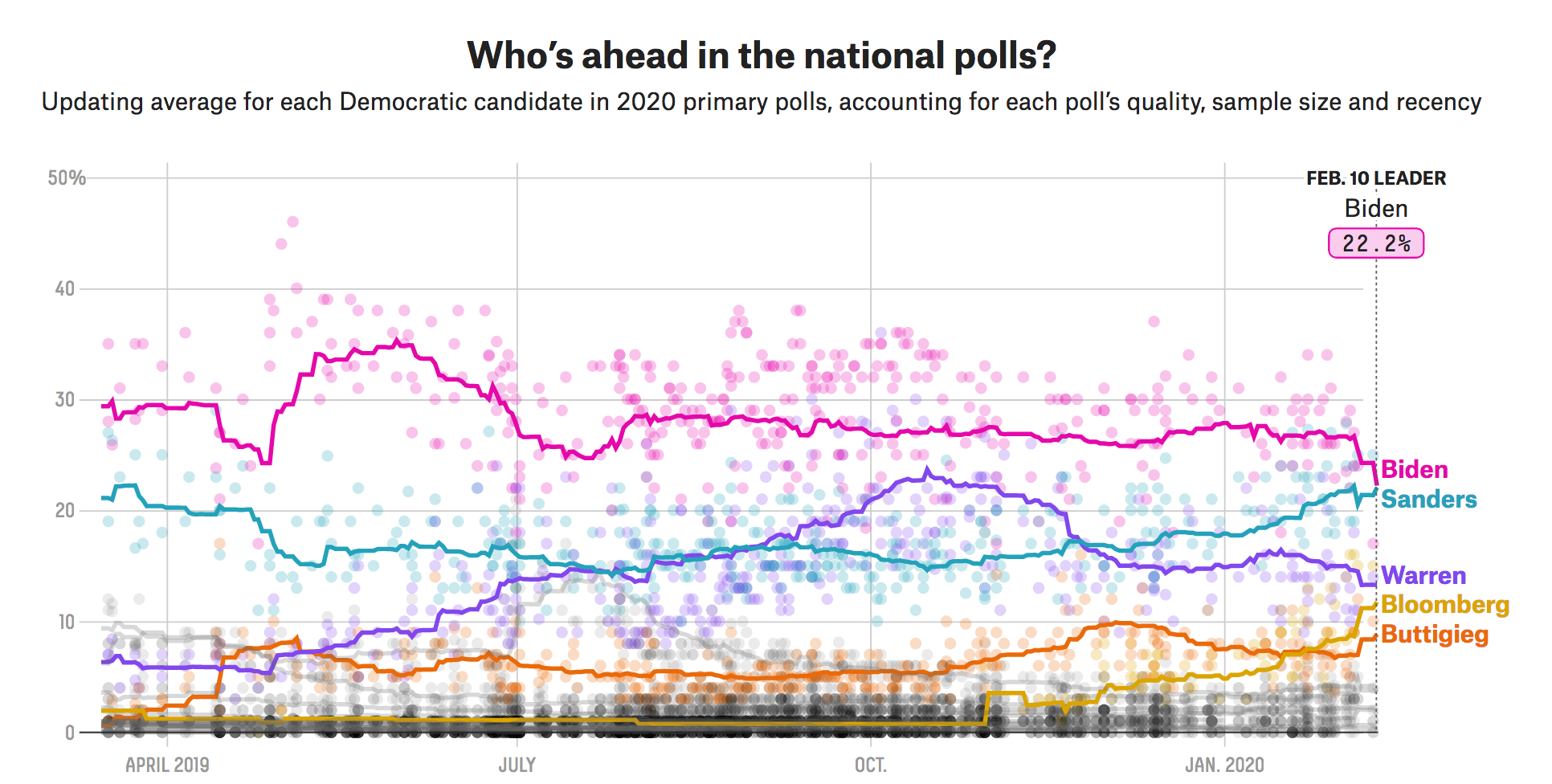 As for how this poll affects our primary forecast, it didn’t shift things that dramatically because the model had already anticipated Sanders’s national numbers would improve after Iowa while Biden’s would fall. However, the fact that Bloomberg made such a substantial gain — he nearly doubled his support from 8 percent in Quinnipiac’s January poll to 15 percent — means that it’s also increasingly likely that no one will win a majority of pledged delegates. Bottom line: Sanders’s gains were already priced in, so the Quinnipiac poll largely fit within the model’s expectations, but there’s also a lot of uncertainty and a 1 in 4 chance that no single candidate wins a majority. 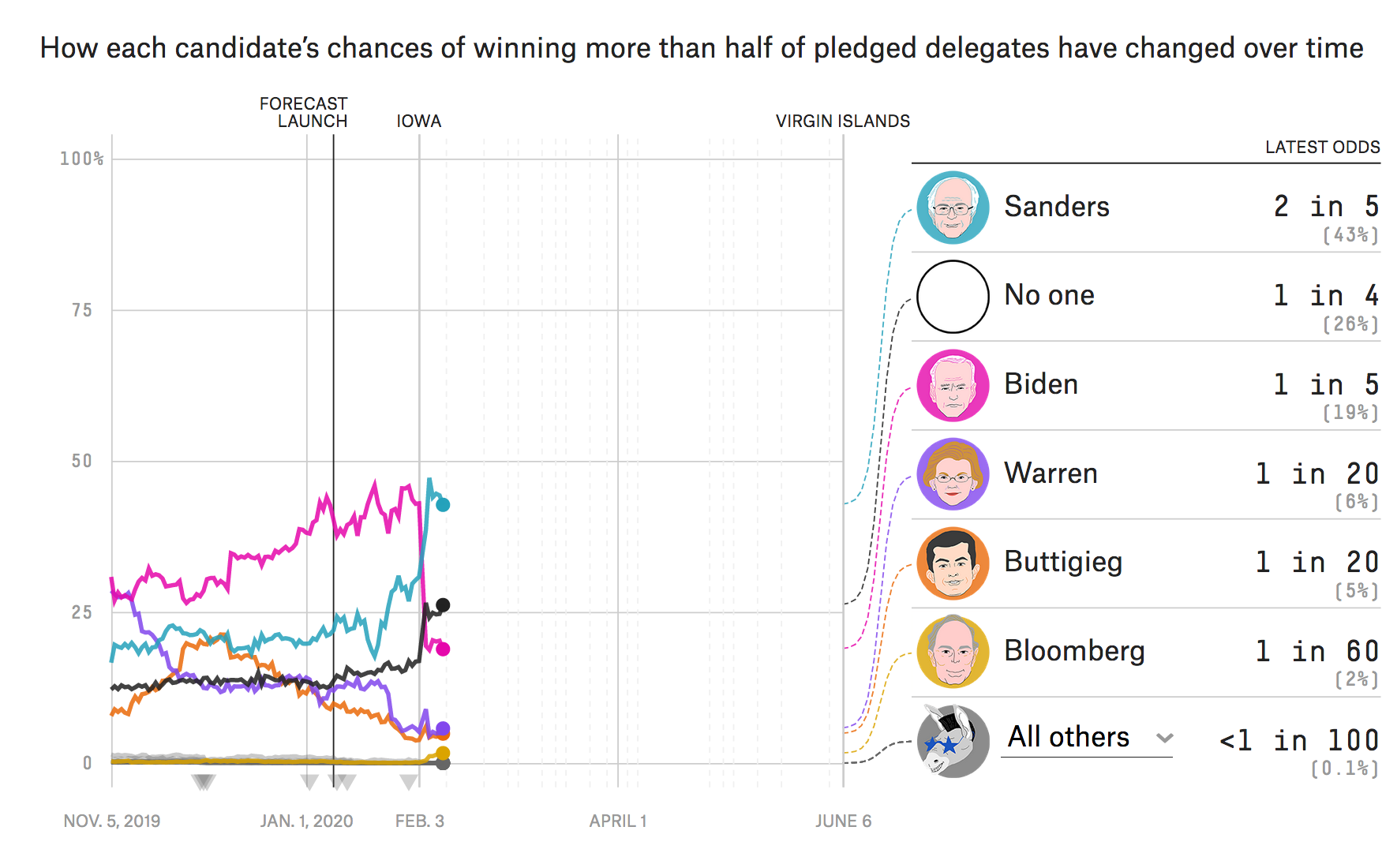 In the meantime, though, the campaigns’ immediate focus is New Hampshire, which holds its primary tomorrow. With the new national poll plus several new New Hampshire polls from last night and this morning now incorporated into our model, the FiveThirtyEight forecast gives Sanders a 2 in 3 (67 percent) chance of winning the Granite State. Buttigieg — who had been gaining ground in New Hampshire but whose polling numbers there appear to have leveled out — has a 3 in 10 (29 percent) chance. No other candidate has more than a 2 percent chance of carrying the state, although our model has Warren and Biden in a tight race for third place — Warren is forecast to get 14 percent of the vote, on average, while Biden gets 13 percent (but remember, the margin of error of these estimates is quite large).

These odds have changed little over the last few days, in part because we keep getting a ton of New Hampshire polls that say roughly the same thing: Sanders leads, with Buttigieg hovering in striking distance and all other candidates trailing to various degrees. We’ve gotten five polls in just the last 24 hours, including the final installments of the three tracking polls in the state:

These final tracking polls disagree more than they did yesterday about the size of Sanders’s lead, but are generally positive for Sanders. Emerson and Suffolk also found Klobuchar making a small charge into third place; for example, she has gone from 6 percent in Feb. 6-7’s Suffolk poll to 14 percent in this latest one. This has perhaps come at the cost of blunting Buttigieg’s momentum, as his vote share has not changed much over the last few days in either poll, even though he gained several points in them throughout last week. And the three installments of CNN/UNH’s poll that we’ve gotten have shown little movement for all candidates.

We also got two new non-tracking polls of New Hampshire:

These polls suggest there is still a chance that Warren, Biden or Klobuchar could catch Buttigieg for second place. However, at the same time, they confirmed the findings of almost every other poll we’ve seen in New Hampshire this week: Sanders has a modest lead.