Sen. Bernie Sanders, New Hampshire’s next-door neighbor who won the state by 22 percentage points in 2016, has been the front-runner in the Granite State’s first-in-the-nation primary for weeks. And according to the FiveThirtyEight primary forecast, he still has a 2 in 3 (68 percent chance) of winning the state. But former South Bend, Indiana, Mayor Pete Buttigieg is now making it interesting. His numbers are rising in almost every successive poll of the state, and he’s now up to a 1 in 4 (25 percent) chance of winning there.

Today’s piece of good news for the Buttigieg campaign was an NBC News/Marist poll of New Hampshire, conducted Tuesday through Thursday, that showed Sanders at 25 percent and Buttigieg at 21 percent. (They were followed by Sen. Elizabeth Warren at 14 percent, former Vice President Joe Biden at 13 percent and Sen. Amy Klobuchar at 8 percent. However, New Hampshire is probably just a two-person race — our model thinks there is only a 7 percent chance that someone other than Sanders or Buttigieg wins.) In Marist’s last New Hampshire poll, conducted Jan. 20-23, Sanders had 22 percent and Buttigieg had 17 percent, so they both did a bit better in the latest poll — although the differences were within the margin of error. Still, no other candidate experienced a boost of more than 1 percentage point.

And given the evidence from other polls, it seems safe to say that Buttigieg, at least, is on the upswing in New Hampshire. Both Suffolk University/Boston Globe/WBZ-TV and 7 News/Emerson College have been conducting tracking polls of the Granite State, and the latest installment of each was released late last night. And the trend is clear:

Since the final poll before the Iowa caucuses — which took place on Feb. 3, although the results have been announced slowly over the course of the entire week — Buttigieg has gained 12 points in the Suffolk poll and 10 points in the Emerson poll. The Suffolk poll implies he is getting this support from Biden, who has dropped 7 points since Feb. 2-3, although the Emerson poll doesn’t show nearly as significant a dropoff for the former vice president — so maybe Buttigieg’s claim of victory in Iowa is just causing undecided voters to finally settle on him as their choice.

And there is still plenty of room for Buttigieg (or another candidate — if, say, someone else has a good debate on Friday) to gain. According to Marist, 15 percent of likely Democratic primary voters who have a preferred candidate say they still might change their minds, and 5 percent say they are still outright undecided.

Just because Buttigieg has the momentum in New Hampshire, however, doesn’t mean his chances of winning the nomination have increased. Our overall primary forecast still gives Buttigieg only a 1 in 25 (4 percent) chance of winning a majority of pledged delegates. In a nutshell, proving you can (partially) win Iowa and (maybe) win New Hampshire doesn’t prove you can win more diverse states like Nevada and South Carolina — and Buttigieg is still underperforming with nonwhite voters, although we’d like to see more post-Iowa national polls to confirm this. 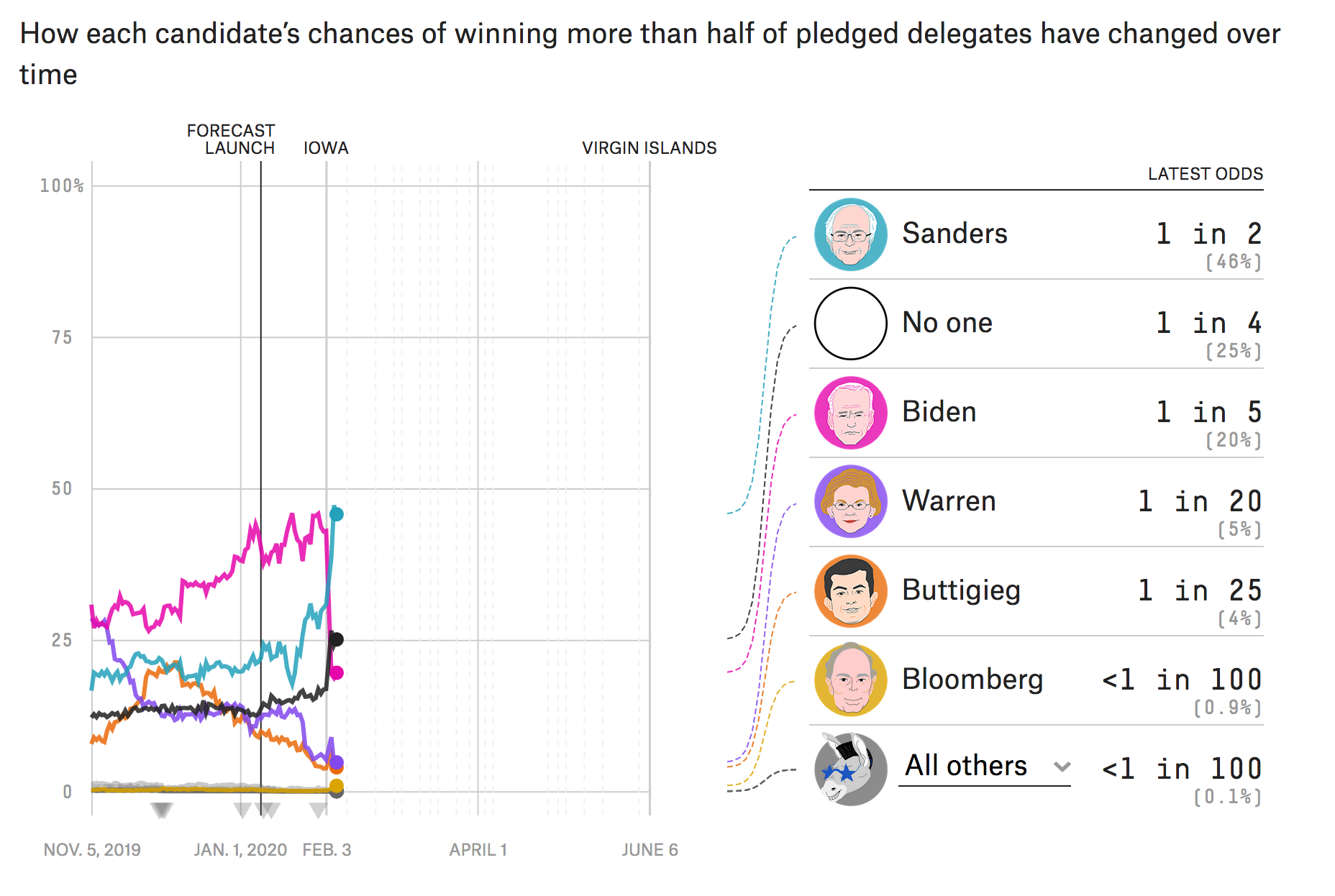