The Houston Astros currently sit on top of the American League West with a 2.5 game lead over the Los Angeles Angels, a team paying Albert Pujols, C.J. Wilson, Jered Weaver, and the rest of the squad a combined $146.4 million. The Astros, meanwhile, will spend less than half that figure on players in 2015. Their total payroll comes in just north of $69 million, 29th out of 30 MLB teams and a remarkable $158 million less than the Los Angeles Dodgers are spending to field a team this year.

The success of the Astros and the (comparatively) minuscule payrolls of other plucky small-budget teams is often cited by people trying to advance an egalitarian narrative: that the amount a team spends does not matter. In recent years, Time called the Royals the future of baseball. The New York Times went with Smaller Markets and Smarter Thinking. Baseball America wrote an article asserting, “if you look at competitive balance as the opportunity for teams to make the playoffs and legitimate runs at titles, baseball is truly in a golden era.” Sports Illustrated argued that the average payrolls of playoff teams show that money isn’t the factor it used to be and the Providence Journal offered, “money can’t buy success.” Andrew McCutchen, 2013 National League MVP, is the poster boy for what small-budget teams can accomplish, saying, “Payroll doesn’t mean everything. If that was the case, the Yankees would win every year.”

That’s all heart-warming, but evidence suggests that the relationship between money and winning is as strong now as it’s been any time in the free-agency era. Check out the figure below, which shows the relationship between spending and win percentage during each of the three 10-year spans since 1985.1 Each team season is one dot in the figure, and the red line reflects a smoothed curve fit through the points. The smoothed curves represent the general relationship between spending and performance for each team season in each decade; aggregating all the decade’s data points shows a pattern: More money generally means more wins. 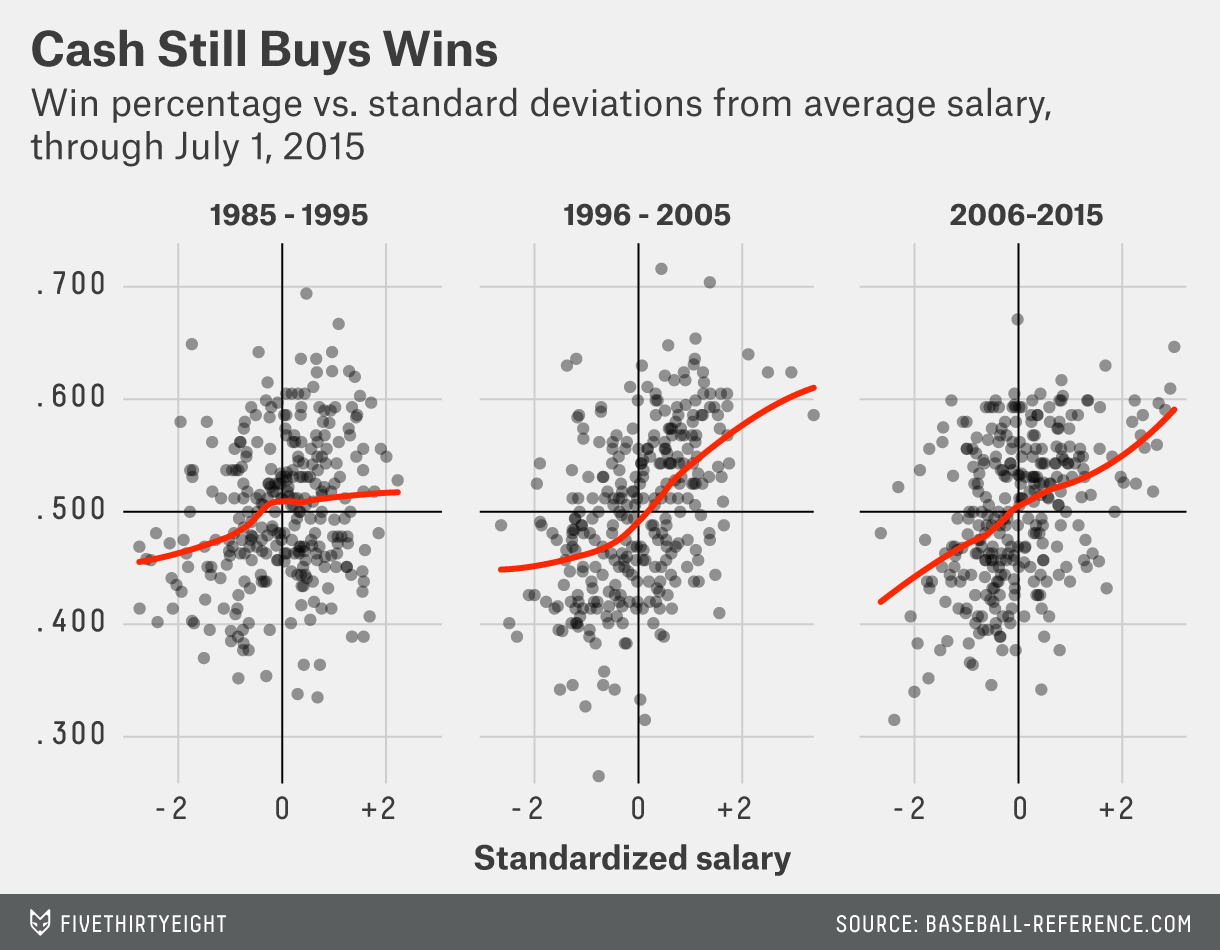 The line gets steeper going from left to right, implying that in recent seasons, jumps in salary have been associated with larger gains in win percentage. Altogether, none of the 20 teams with the highest relative salaries since 1985 have finished below .500.

GRAPHIC: Using data from the last 30 years, we created win-pay curves for every team in Major League Baseball. Click here to see how well your favorite team spent its money.

J.C. Bradbury, an economics professor at Kennesaw State University, found that winning more increases revenue exponentially. “Going from 85 wins to 90 is worth more than 80 wins to 85,” he says. As a result, while it might cost more per win for a team that wins 90 games than 85, it makes financial sense because the revenue reward will be higher as well. This leads to a self-perpetuating cycle. Additionally, fans of teams that win frequently expect them to continue winning, and management pays more to do so. For a team like the New York Yankees, paying 10 percent more than anyone else for a second baseman who is only 5 percent better than his closest peer is worth the money (and they can afford it).

But though the current narrative revolves around small-budget success stories as an argument against the importance of salaries, baseball has always had small-budget overachievers. “Just because you don’t spend money doesn’t mean you can’t win,” Bradbury says. As long as there has been baseball, there have been teams with low payrolls that have exceeded expectations in the win column.

Perhaps one reason for the renewed focus on the success of small-budget teams is the importance of playoff success versus the regular season. Postseasons in American sports offer a smaller sample size than, say, soccer’s English Premier League, where the winner is determined by 38 games. In baseball, the better team (the one with the higher payroll) is less likely to prevail over the course of a short playoff series than they would be over an entire season. That, combined with the expansion of the playoffs, means it’s easier for a small-budget team to reach the World Series, as the Kansas City Royals did in 2014, losing to the San Francisco Giants in Game 7. Winning a playoff series can come down to a few factors — a couple of good pitchers and luck — that are less important during the regular season. “The formula seems to be: limp through regular season, get into playoffs, then win,” said Rodney Fort, professor of sport management in the School of Kinesiology at the University of Michigan.

Fort, however, also thinks that the case for the relationship between payroll and wins is overstated. “When have we ever been satisfied that a simple relationship between one variable and another variable tells the whole story of the determination of winning?” he says. “What you really need to do is stop and think about what are all the other things: nothing about coaches, nothing about front office/GM acumen.” In Fort’s view, equating payroll and wins leaves out too many other variables.

He has a point, as the relationship between salary and winning can be drastically different among different franchises. Some teams don’t get results when they spend more — the New York Mets frowny face is almost too perfect given their fortunes. 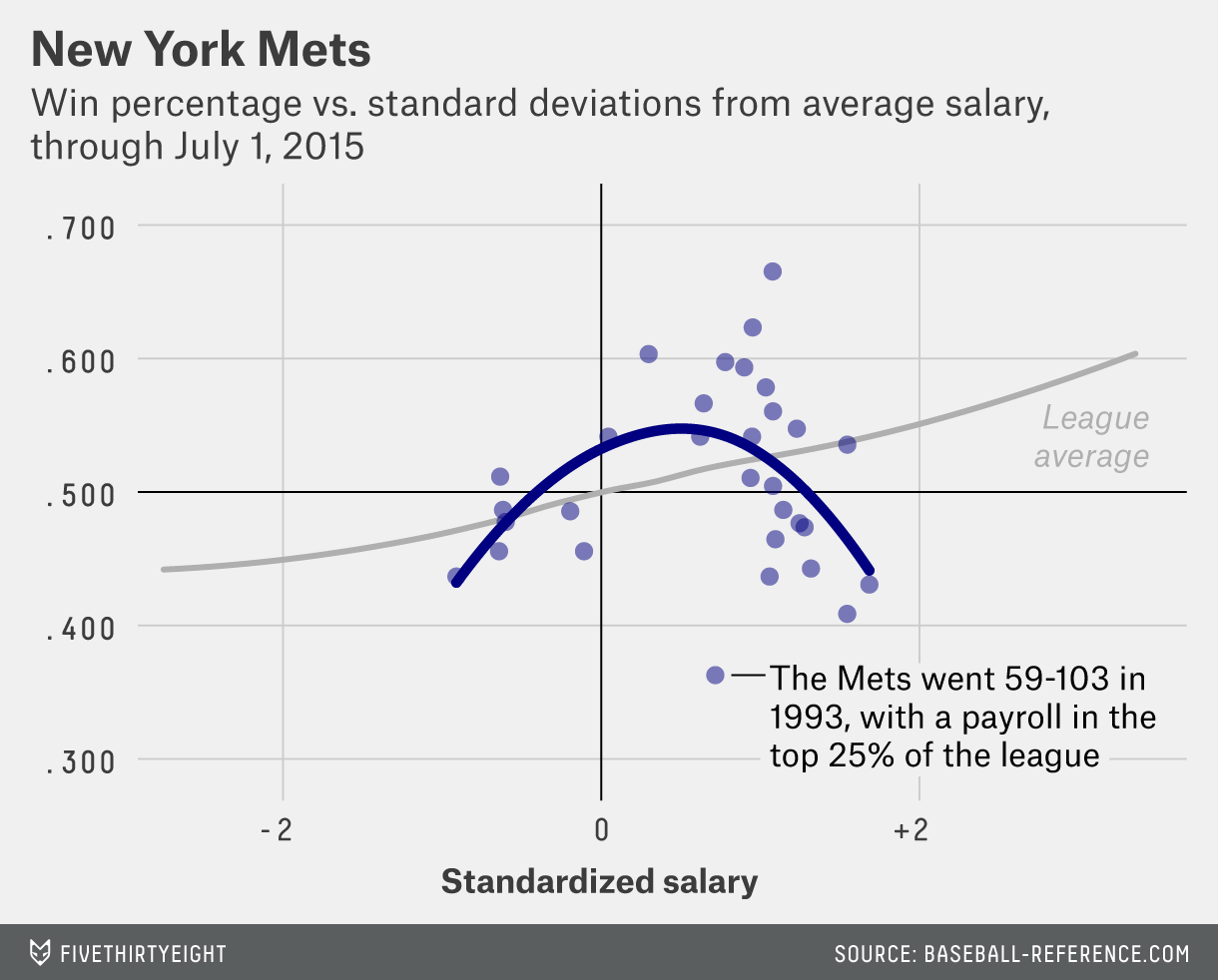 For a few small-budget teams such as the Cleveland Indians and the Royals, though, there’s a strong relationship between spending and winning. 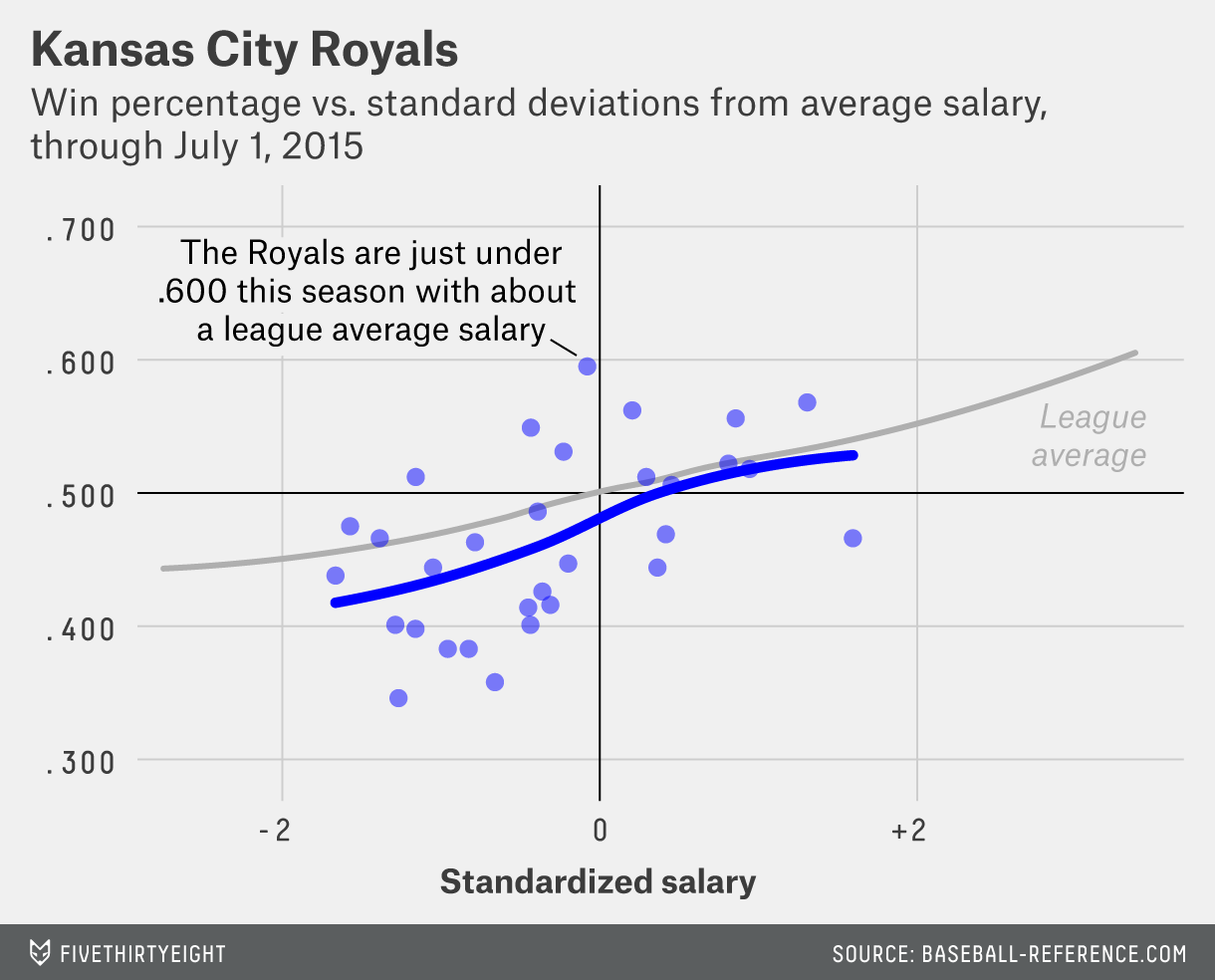 As you can see in the chart of every team’s win-pay curves, spending usually helps, but incompetent spending gets a team nowhere. It’s a waste.