The recent polling surge by Donald Trump has launched a thousand stories about Trump’s “unprecedented campaign.” But it’s nothing all that unusual: Similar surges occurred for almost every Republican candidate four years ago, including Herman Cain, Michele Bachmann, Rick Santorum and Newt Gingrich (twice).

History’s lesson isn’t necessarily that Trump’s candidacy will go bust tomorrow, however. There are plenty of examples of fringe or factional candidates who held on to their support for much longer than the month or two that Cain and Bachmann did. Sometimes, they did well enough in Iowa or New Hampshire, or even won them. Pat Buchanan claimed New Hampshire in 1996, for instance, while Mike Huckabee won Iowa in 2008. Steve Forbes took 30 percent of the Iowa vote in 2000.

The lesson, rather, is that Trump’s campaign will fail by one means or another. Like Cain, Bachmann and Gingrich, Buchanan, Huckabee and Forbes came nowhere close to winning the Republican nomination.

If you want absurd specificity, I recently estimated Trump’s chance of becoming the GOP nominee at 2 percent. How did I get there? By considering the gantlet he’ll face over the next 11 months — Donald Trump’s Six Stages of Doom:

When it happens: This is the stage we’re in now; it will continue through the next couple of months.
Potential threat to Trump: Increased attention to other GOP candidates.

One of the occupational hazards for those of us who write about politics for a living is a kind of time dilation. If you’re charged with filing several campaign stories a week, then two or three weeks can seem like an eternity.

But most Americans have other things on their minds right now. Paying the bills. Finally taking that vacation. Baseball. They’re not really paying a lot of attention to the campaign. Based on historical patterns of Google search traffic, the level of public interest in the primary campaign right now is less than one-tenth as high as it will be later in the cycle.

This is why it’s absurd to focus on how Trump’s polling is changing from day to day. When Trump made his idiotic comments about John McCain’s military service a few weeks ago, there were a few news outlets like the New York Post who suggested it might bring about his immediate demise. We were skeptical of that conclusion at FiveThirtyEight. For a variety of reasons, Trump isn’t affected much by negative media coverage — it may even help him. But a lack of media coverage might be a different story.

If, like most Americans, you’ve been paying only passing attention to the GOP campaign, then pretty much the only candidate you’ll have been hearing about is Trump. According to data compiled by the Media Research Center, Trump has received more network news coverage than Jeb Bush, Scott Walker and Marco Rubio combined. So if a pollster calls you and rattles off 17 names, and there are six or seven candidates you like well enough, which name might you mention when asked for your first choice? Possibly Trump, since his name will be top-of-mind. There’s a near-perfect correlation, in fact1 between how much news coverage a candidate has received and where they rank in recent national polls: 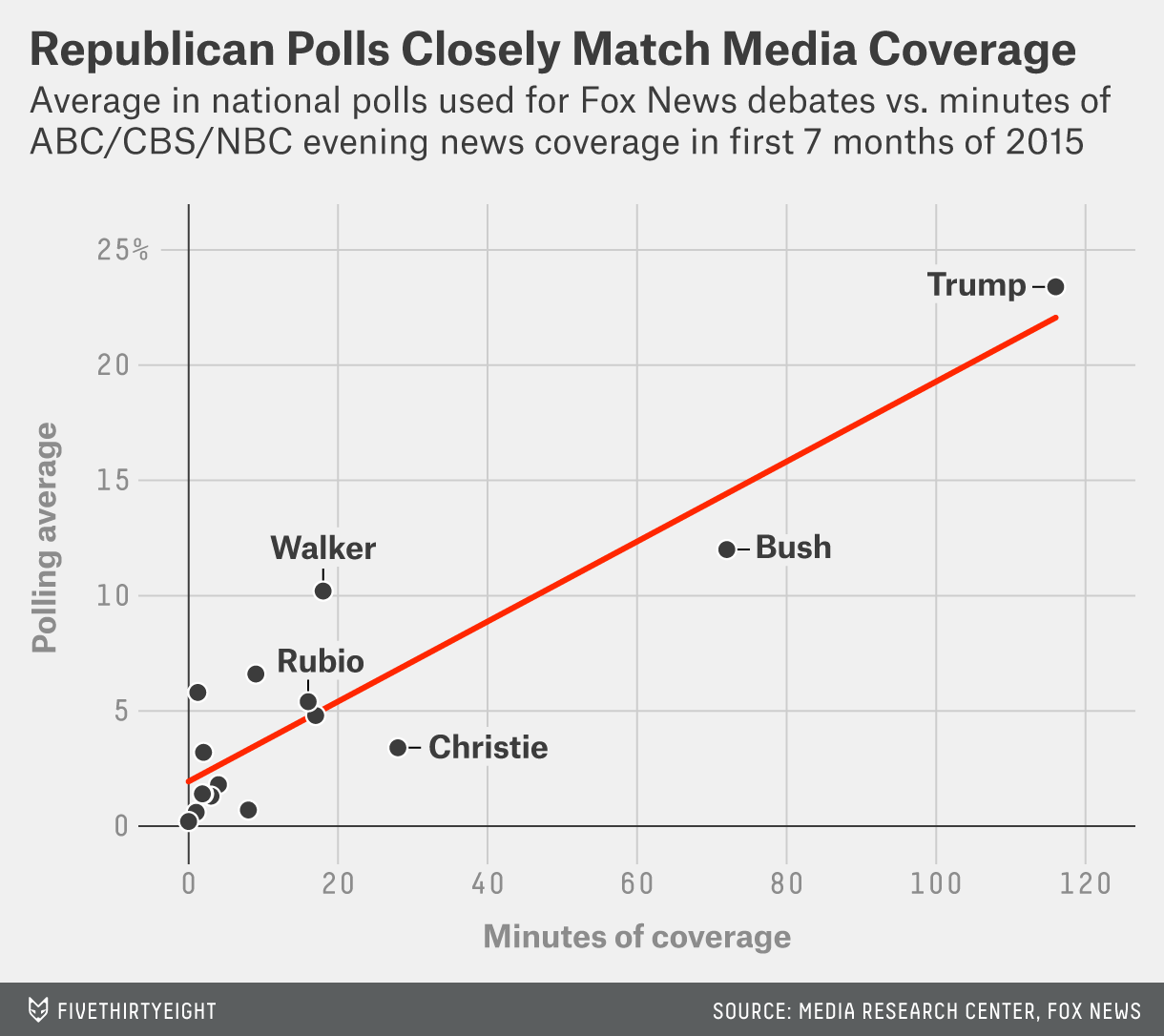 But the circuit could be broken once there’s some news about another candidate. Every Republican on stage will have the opportunity to make news in the debate tonight, for instance. It’s possible we’ll still be talking about the Trump surge in a few weeks, but it’s also possible that we’ll be contemplating the Ben Carson or Ted Cruz or Chris Christie surge instead.

When it happens: Mid-November or thereabouts, as voters up their level of attention to the campaign
Potential threat to Trump: Polling support doesn’t translate to likely, more-informed voters.

In the general election, Labor Day is the traditional benchmark when there’s a substantial acceleration of public interest in the campaign. I’m not sure there’s quite the same demarcation in the primaries, but, in my experience, the timbre of the race will have changed by Thanksgiving or so. Voters, especially in the early voting states, will be doing less “window shopping” and instead will be thinking about who they might cast a ballot for. The polls will change too, starting to home in on what they deem to be “likely voters.” There’s some evidence that Trump is over-performing among “low-information voters.” By November, their ranks will decrease: They’ll either have become more informed, or they’ll be screened out by pollsters because they aren’t likely to vote.

When it happens: Feb. 1 and Feb. 9, based on the provisional calendar.
Potential threat to Trump: Middling performance in one or both states, either in an absolute sense or relative to polls.

Eventually, we’ll have some real votes to test the polls against. The odds are that the polls will be pretty far off in the first few states; they’re historically not very accurate in primaries and caucuses. One reason for this, perhaps the principal one, is because turnout is hard to predict. Trump has built some semblance of an organization in Iowa (he has less of one in New Hampshire), but it probably won’t be the best in the state at persuading voters to turn out.

Despite the relatively poor track record of polls in Iowa and New Hampshire, however, they have a major influence on how the results are interpreted by the press. Historically, the candidates who get the most favorable media coverage and receive the biggest “bounces” out of Iowa and New Hampshire are not those who perform the best in an absolute sense but instead those who beat the media’s expectations. It’s possible that Trump will master expectations management between now and Iowa, but, given his tendency to trumpet every favorable poll, he could also set himself up for a fall. A Trump who finishes in third place with 14 percent of the vote in Iowa won’t have much to brag about.

When it happens: mid-February through mid-March
Potential threat to Trump: Other candidates drop out, and remaining ones surpass Trump.

But some candidates with parallels to Trump have done perfectly well in Iowa and New Hampshire. In fact, there’s been about one such Republican, on average, in every contested election cycle. Below, I’ve listed past Republican candidates who (i) had less than 5 percent of the party’s endorsement points as of the date of the Iowa caucuses, meaning they had very little support from the party establishment, but (ii) won at least 20 percent of the vote in Iowa anyway. There are six of these candidates, ranging from rabble-rousers like Buchanan to religious-right candidates like Huckabee, to another self-funded billionaire in Forbes. 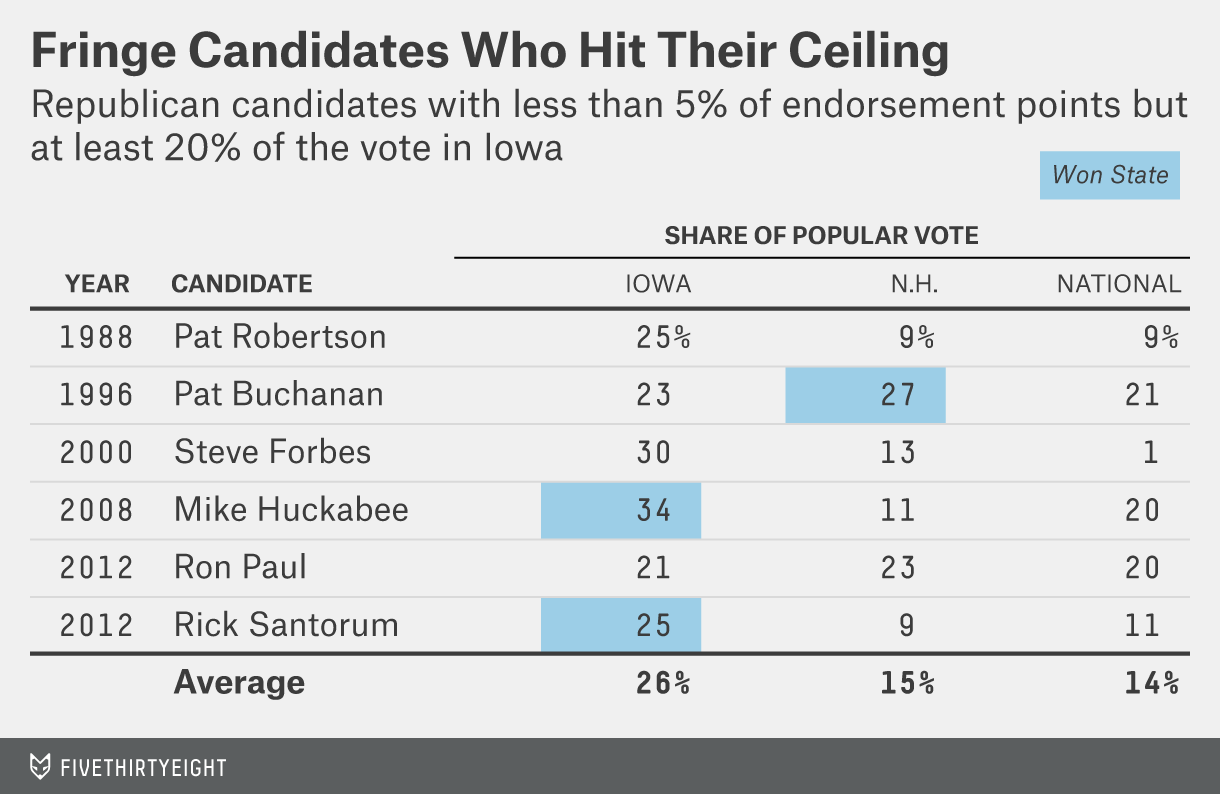 The problem is that they didn’t go very far from there, winning an average of just 14 percent of the popular vote across all the remaining primary and caucus states that year. Even a candidate who did a little better than that, retaining 25 or 30 percent of the vote, would soon be bypassed as the rest of the field consolidated down to one or two other establishment-backed alternatives. This is especially likely to be a problem for Trump. Contrary to what you may have read elsewhere, he’s actually not all that popular among Republicans. His favorability ratings among Republicans have improved since before he declared himself a candidate2 but remain in the bottom half of the GOP field and well below the standard of candidates who have been nominated in the past.

When it happens: mid-March through final primaries in June
Potential threats to Trump: Poor organization in caucus states, poor understanding of delegate rules, no support from superdelegates.

When it happens: June through Republican National Convention, July 18-21
Potential threat to Trump: The Republican Party does everything in its power to deny him the nomination.

If Trump makes it past Stage 4, we’ll have to consider his campaign successful, up to a point. He’ll have gotten further than any similar candidate has in the past. But he’d still be a long way from winning the nomination, and the final two stages might be his hardest yet.

The Republican Party’s delegate selection rules are straightforward in some states but byzantine in others, especially in caucus states where delegates are sometimes not formally pledged to the candidate who apparently earned their support on election night. Furthermore, about 7 percent of delegates to the RNC are party leaders — what Democrats would call “superdelegates” — who are usually not bound by the results of the popular vote in their states at all.

This introduces a little bit of slack into the system. It works in favor of establishment-backed candidates, or those who have an intricate understanding of the delegate rules. And it works against candidates like Trump.

Regular FiveThirtyEight readers will be familiar with “The Party Decides” paradigm of the nomination process. It posits that the nominee represents the consensus choice of influential members of the party, and that rank-and-file voters serve mostly to vet and validate the candidates in the event of a close call.

Much of the party’s influence consists of what you might call “soft power,” the ability to influence outcomes by persuasion rather than coercion. But the party also has some “hard power”: It literally makes the rules. It can rule against candidates it doesn’t like in the event of delegate-counting disputes. It can probably even change the rules midstream. There isn’t a lot of precedent to worry about violating, since it’s been 40 years since Republicans came close to a brokered convention.

If Trump made it this far, the Republican Party would go to extraordinary lengths to avoid nominating him. In “The Party Decides” view, parties are basically looking for two things from their nominees: They want them to be reliable (meaning, they can be counted on to enact the Republican agenda once in office), and they want them to be electable (meaning, they can win in November). It’s hard to think of a candidate who does worse on those two measures than Trump. He’s exceptionally unpopular among independent voters. But he also has a checkered political past that includes once having supported abortion rights and universal health care. For the Republican Party, he’s the worst of all possible worlds.

So, how do I wind up with that 2 percent estimate of Trump’s nomination chances? It’s what you get3 if you assume he has a 50 percent chance of surviving each subsequent stage of the gantlet.4 Tonight’s debate could prove to be the beginning of the end for Trump, or he could remain a factor for months to come. But he’s almost certainly doomed, sooner or later.

Check out our live coverage of the Republican debate.