The Premier League has felt more like a coronation than a competition this season. Liverpool opened up a gap at the top of the table as wide as the River Mersey and will almost certainly win its first Premier League title — and its first English top division title in 30 years.

In lieu of a title race, Premier League fans have had to settle on a race for the top four and Champions League qualification. That race also looked to be predictable for much of the season, that is until UEFA (the governing body of European soccer) banned Manchester City from competing in next season’s competition for failing to comply with “financial fair play” rules. Manchester City has appealed, but the ban stands for now. That means that, at least for now, the Premier League team that finishes in fifth place will qualify for next season’s edition of the Champions League.

Manchester City’s ban isn’t the only interesting development near the top of the table. It also seems that the Big Six1 stranglehold might be relenting, if just — while perennial contenders like Liverpool, Chelsea and Manchester United currently occupy three of the Champions League spots, recent interloper Leicester City occupies the fourth. Six other clubs — including four that exist outside the Big Six, and three that have spent most of the Premier League era playing in England’s lower divisions — are battling to oust Manchester United and sneak into the top four. Unlikely though it has been all season, one of those teams is Burnley.

One reason — and this is as critical as it is fundamental — is that Burnley doesn’t score many goals: It ranks 13th in goals scored per 90 minutes played and 14th in expected goals (xG). That trend is likely to continue because Burnley also doesn’t create many scoring chances — it ranks 19th in the Premier League in that category, ahead of only Crystal Palace. The Clarets create just 7.32 chances per 90 minutes played; Champions League qualifiers since the 2010-11 season have created an average of 12.46 chances per 90 minutes, and none has created fewer than 9.92. Burnley’s roughly league-average defense — it concedes 1.39 goals per 90 minutes played, on par with Champions League regular Chelsea — can carry only so much water.

Burnley’s inability to score goals — or even create goal-scoring chances — doesn’t bode well for its Champions League hopes. Since 2010-11, no Premier League team has qualified for Europe’s top club competition with an xG per 90 minutes played of lower than 1.47. Burnley’s xG per 90 this season is 1.42.

If Burnley were to go on and defy the odds, it would mark a significant moment in recent Premier League history, if not a complete toppling of the power structure. Aside from Leicester City’s astounding and unlikely title-winning campaign in 2015-16, the Premier League has been all but inevitable for a decade. Chelsea, Manchester City and Manchester United are the only other teams to win the title. Add Arsenal, Liverpool and Tottenham to the mix, and you’ve got a list of all of the English teams that have qualified for the Champions League since the 2005-06 season.2

This inevitability might be a bit boring, but the league has hardly reached its nadir: According to FiveThirtyEight’s Soccer Power Index (SPI), 13 of the top 50 teams in world soccer play in the Premier League. England’s top division boasts a higher share of top 50 teams than any other league in world soccer, including La Liga in Spain. Indeed, that glut of quality is on full display in the league table this season — through matchweek 28, fifth and 11th places are separated by just 5 points. For the first time in the Big Six era, at least one team in the bottom half of the table — the somewhat resurgent Everton — retains a legitimate chance of qualifying for the Champions League with just 10 matches remaining on its league schedule, and several potential newcomers are making a legitimate push, too. For one reason or another, the Premier League has some degree of parity this season.

The gap between the final Champions League qualifier and 11th place tends to be double digits — and thus all but insurmountable — at this stage in a Premier League season. In that usual scenario, things get very boring very quickly for teams that are neither battling relegation nor striving for European cup qualification. 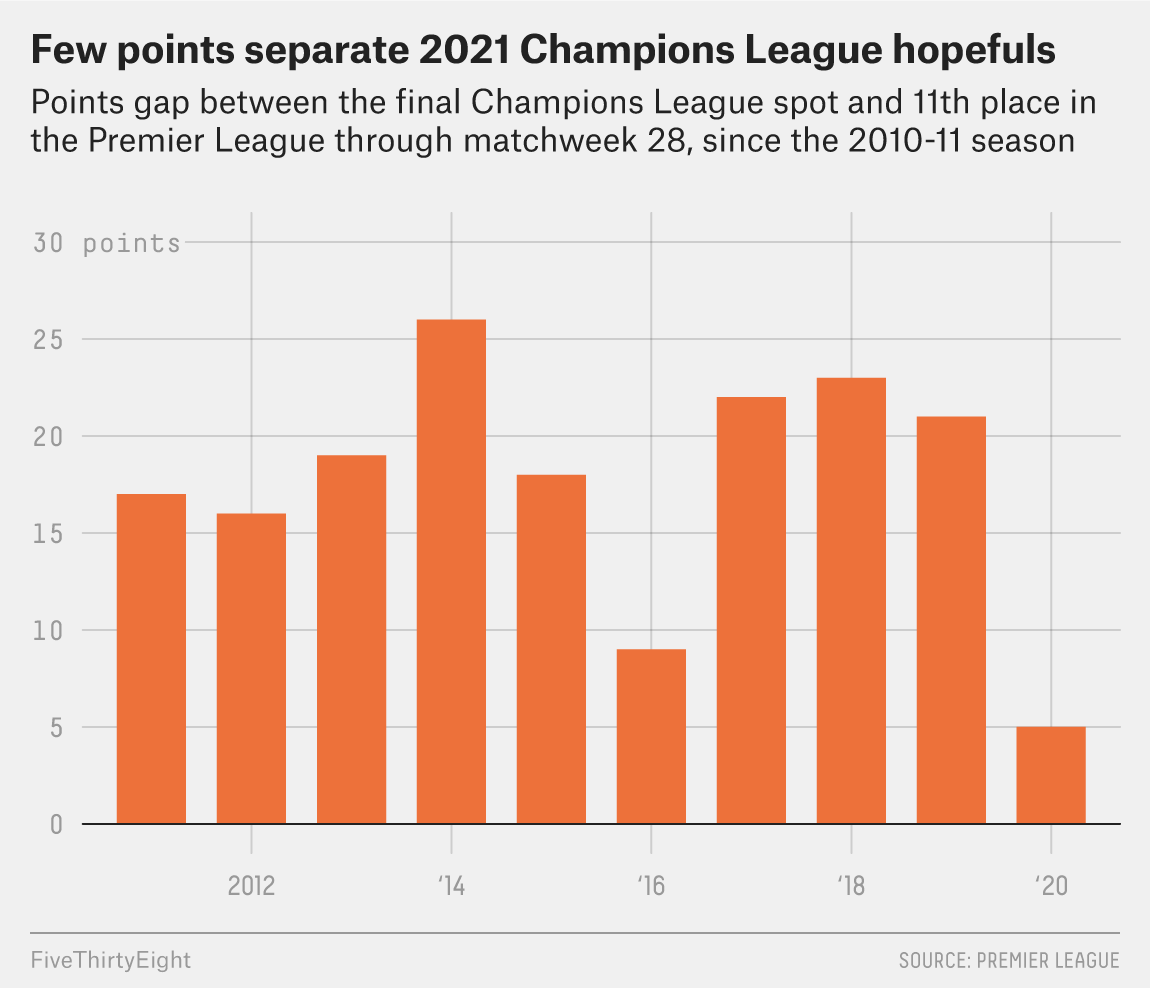 The Premier League has been lopsided for its entire existence, but it has been especially so for the last decade. Power has been so thoroughly consolidated by the league’s Big Six that only one team not in that cohort (Leicester City) has managed to qualify for the Champions League in any of the past 15 seasons.

Burnley probably won’t be the team that bucks that trend: Its remaining schedule, which features away matches against Manchester City and Liverpool, as well as its failure to succeed in the final third of the field will be difficult hurdles to overcome. But the fact that Champions League qualification is still a remote possibility for the Clarets this deep into the season is a small miracle.