Going into the English Premier League’s winter break two weekends ago, the only interesting race was for the final spot for the 2020-21 Champions League season — and even that race was a bit ho-hum. But all of a sudden, there’s a wide-open contest for not one but two spots.

On Friday, Manchester City was banned from Champions League play for the next two seasons by UEFA, the governing body of European soccer, for violating its “financial fair play” rules. UEFA had opened an investigation in March 2019 after Der Spiegel published internal documents that appeared to show the team routing club money through its sponsors in an effort to get around financial regulations.

Manchester City has vowed to appeal the ban. But the FiveThirtyEight club soccer prediction model is acting for now as though the ban will stay in place, which opens up another Champions League slot for a Premier League team. 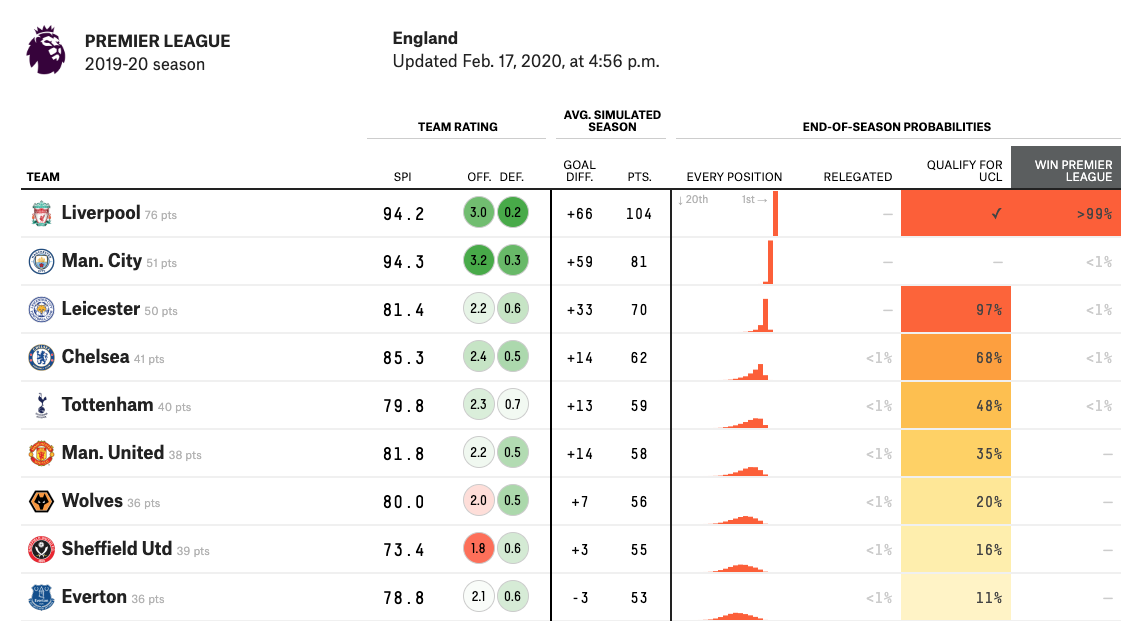 City had been sitting in second place for Champions League qualification behind Liverpool — which, with City’s ban, has now clinched a Champions League slot. Leicester City was already in a commanding position for one of the other available spots, at 92 percent to qualify after play on Feb. 2, and that jumped to 97 percent after this weekend’s matches. But the remaining two spots are where things get interesting.

Six teams within 5 points of one another in the Premier League table have the best odds at the last two Champions League spots: Chelsea (41 points), Tottenham Hotspur (40), Sheffield United (39), Manchester United (38), Wolverhampton Wanderers (36) and Everton (36). The FiveThirtyEight model still gives the best chance to Chelsea, which had been the front-runner for the last Champions League position going into the winter break — at 64 percent — and owns the best Soccer Power Index rating among the contenders. Even after the Blues’ loss on Monday, they still have a 68 percent chance at one of the spots. But the team that beat Chelsea on Monday — Manchester United — is now back in Champions League contention as well; the club has risen in two weeks from a 7 percent chance to qualify to 35 percent. That, though, wasn’t the biggest jump: Tottenham went from a 19 percent chance all the way to 48 percent.1

Manchester City still has paths to play in next season’s Champions League: First and foremost, the club could win its appeal in the international Court of Arbitration for Sport. But even absent a win, if the appeal is still undecided when next season starts, City could be allowed to play the 2020-21 competition.2 And the club may take the step of suing UEFA in a civil court, which could require UEFA to reinstate City during the proceedings.

So what does that legal uncertainty mean for the Premier League teams that now suddenly find themselves in contention for the Champions League? Well, for now they may want to set their sights on that third spot rather than risk the possibility of City’s Champions League hopes rising from the dead on appeal.

Sara Ziegler is the former sports editor at FiveThirtyEight. @saramziegler