In an NBA offseason devoid of the usual LeBron James-related drama,1 the role of free agent heel has been occupied by once and future Los Angeles Clippers center DeAndre Jordan. First, ESPN reported that Jordan was going to sign with the Dallas Mavericks for more than $80 million over four years. But by Wednesday, rumors had surfaced that Jordan was having second thoughts — perhaps he wanted to return to L.A. after all, especially after Clippers officials proved their devotion by showing up at Jordan’s house and refusing to leave until he reversed his decision. Then early today, Mark Cuban’s worst fears were realized: Jordan spurned the Mavs, instead inking a four-year, $88 million max deal to stay in L.A.

If Jordan wants to win a championship, he made the right choice. By far.

On Wednesday, we tried to make sense of the San Antonio Spurs’ free-agency haul by running their projected Real Plus-Minus (RPM) numbers and comparing them to the rest of the league. (RPM is an advanced metric that attempts to isolate a player’s on-court contribution to his team’s success.) Now that Jordan is back in L.A., we’ve updated those numbers for his Clippers — and for the spurned Mavs. Here’s how each team’s power rating changed with Jordan’s flip-flop.

Without Jordan, the Clippers were projected to be much weaker than were in the 2014-15 season.2 But by convincing him to return to Southern California, they’ll have bolstered their projection from a +2.7 team rating (the equivalent of about 47 wins) to +6.0 (or 54 wins). In other words, even though he can’t shoot free throws, Jordan is still worth quite a bit relative to his replacement. And his homecoming tosses L.A. right back into the scramble for third place in the Western Conference behind Golden State and San Antonio (along with, most likely, Oklahoma City and Houston).

Oddly, for a player with such a great defensive reputation, Jordan’s return helps the Clippers’ offense most. According to offensive RPM, Jordan ranked first among all NBA centers during the 2014-15 season. He doesn’t often get as much credit as he deserves for his offensive game because his scoring numbers don’t fit the typical mold of a dominant low-post presence. But Jordan is a unique player whose offensive value isn’t easy to pin down.

Jordan’s closest historical comparables are all over the place. FiveThirtyEight editor-in-chief Nate Silver and I have been tinkering with a PECOTA-style similarity system for basketball players (tentatively codenamed “CARMELO”), and it suggests that Jordan is most like Dale Davis, Joakim Noah, Samuel Dalembert, Tree Rollins, Horace Grant and James Donaldson. Legends, all. Still, none of those comps quite capture Jordan’s combination of off-the-charts shooting efficiency, a knack for drawing fouls, a great rebounding percentage, a low usage rate and a miniscule assist percentage in the same package.

Jordan is a great defender, too. But the player who would have replaced him on the Clippers would probably have been passable defensively, assuming he played like a, well, replacement-level player. The bigger difference is that replacement-level NBA players tend to be horrible offensively, so Jordan’s ability to play strong defense while simultaneously not killing the offense could be the single greatest benefit that L.A. receives from his return.

As for the Mavericks, they might be screwed. Even with Jordan in the mix, Dallas’s RPM projection was nowhere near those of the West’s top-tier teams — the Clippers without Jordan were projected to be about 3.5 wins better than the Mavericks with him — and now Dallas figures to be a distinctly below-average team. In contrast to the offensive utility Jordan brings L.A., his biggest advantage in Dallas would have been at the other end of the court, where he’d have shored up its shaky defense. (The Mavs are pretty good offensively with or without Jordan.)

One last-ditch effort for Dallas, however, might be to return to the negotiating table with Indiana and attempt to trade for — and absorb the salary of — center Roy Hibbert. In a hypothetical world in which Dallas takes Hibbert’s contract off the Pacers’ hands for a draft pick (and free agent Amar’e Stoudemire departs), the Mavericks would essentially be a .500 team with an even better defense than they were projected to have with Jordan. 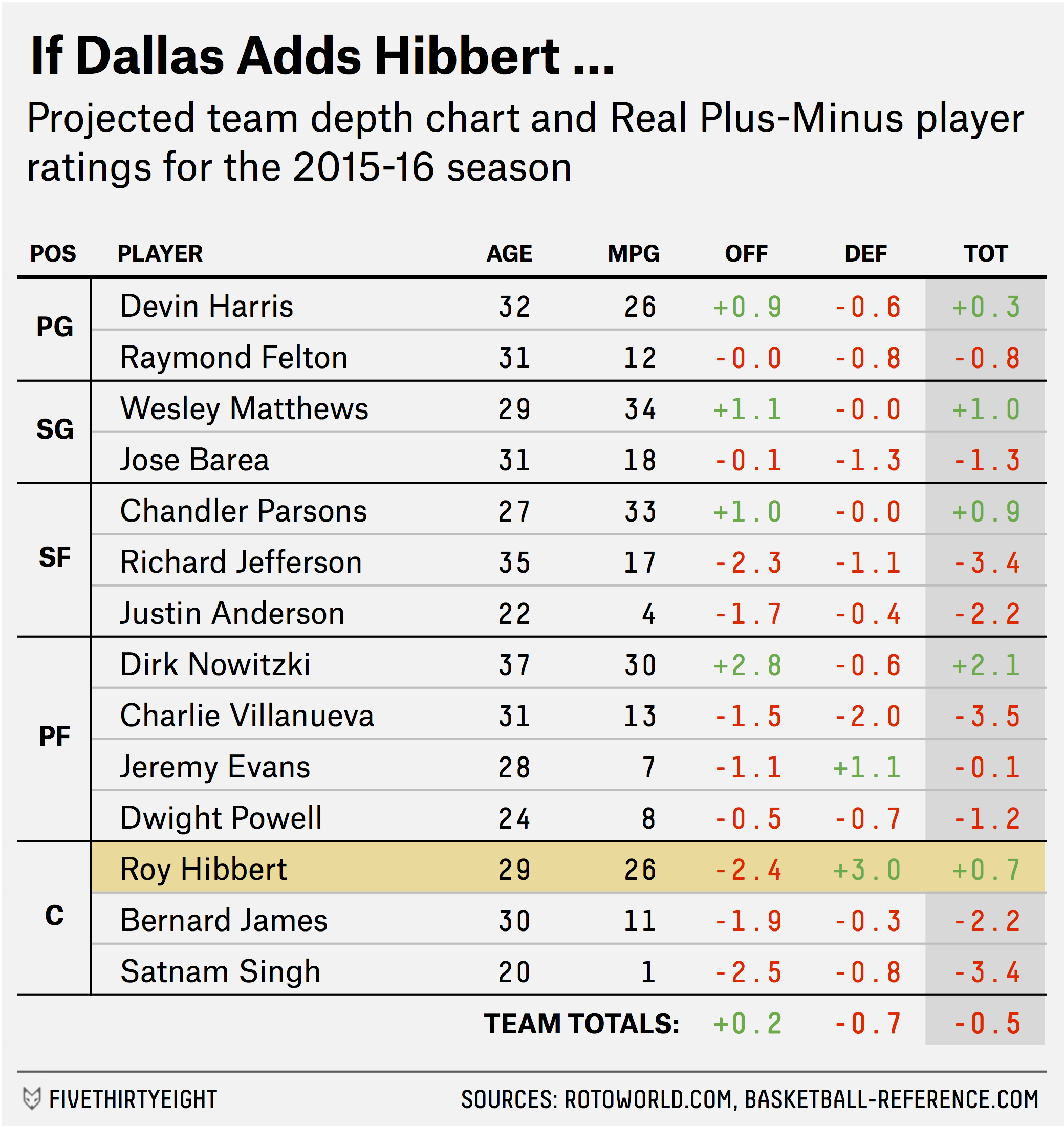 Unfortunately, though, the Lakers and Pacers have already agreed on a trade that would send a second-round draft pick and cash to Indiana for Hibbert and his expiring contract. Ironically, it would take the Pacers “pulling a DeAndre Jordan” and reneging on the agreement to free up Hibbert for a potential trade to Dallas.