When candles are particularly dangerous: Pablo Pena at the University of Chicago looked at the Social Security records of 25 million people who died between 1998 and 2011 and found that the likelihood of dying was 6.7 percent higher on an individual’s birthday. But a note of caution — not mine, but one provided by a smart reader — this trend might be explained in part by officials mistakenly noting the same date of birth and death in their records. That’s clearly not the whole story, though. In his analysis of the research for The Washington Post, Jason Millman highlights how higher birthday death rates are particularly noticeable for those ages 20 to 29. 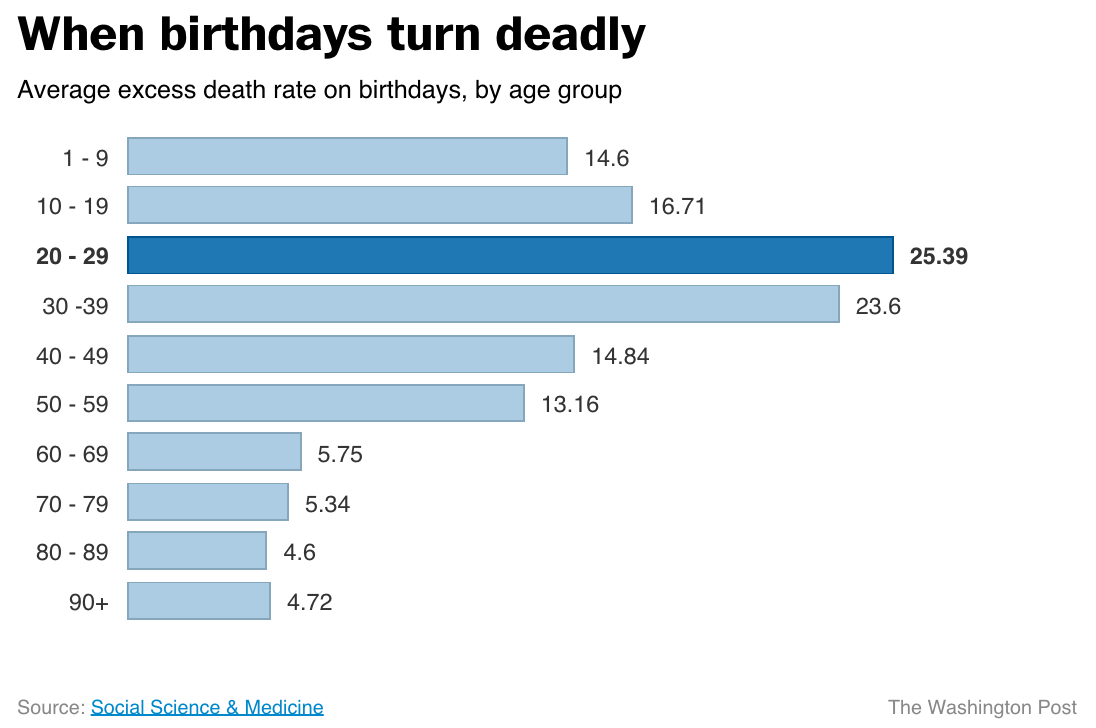 One in five vehicles recalled: In this beautiful interactive that draws on data from the National Highway Traffic Safety Administration and the U.S. Department of Transportation, The New York Times pieces together a story of failure in the motor vehicle manufacturing industry. This year alone, 62 million vehicles have been recalled, the highest total ever. It’s not just an informative story, it’s a practical one, too: After discovering the trends, you can enter in the details of your own vehicle to find out whether it has been recalled. 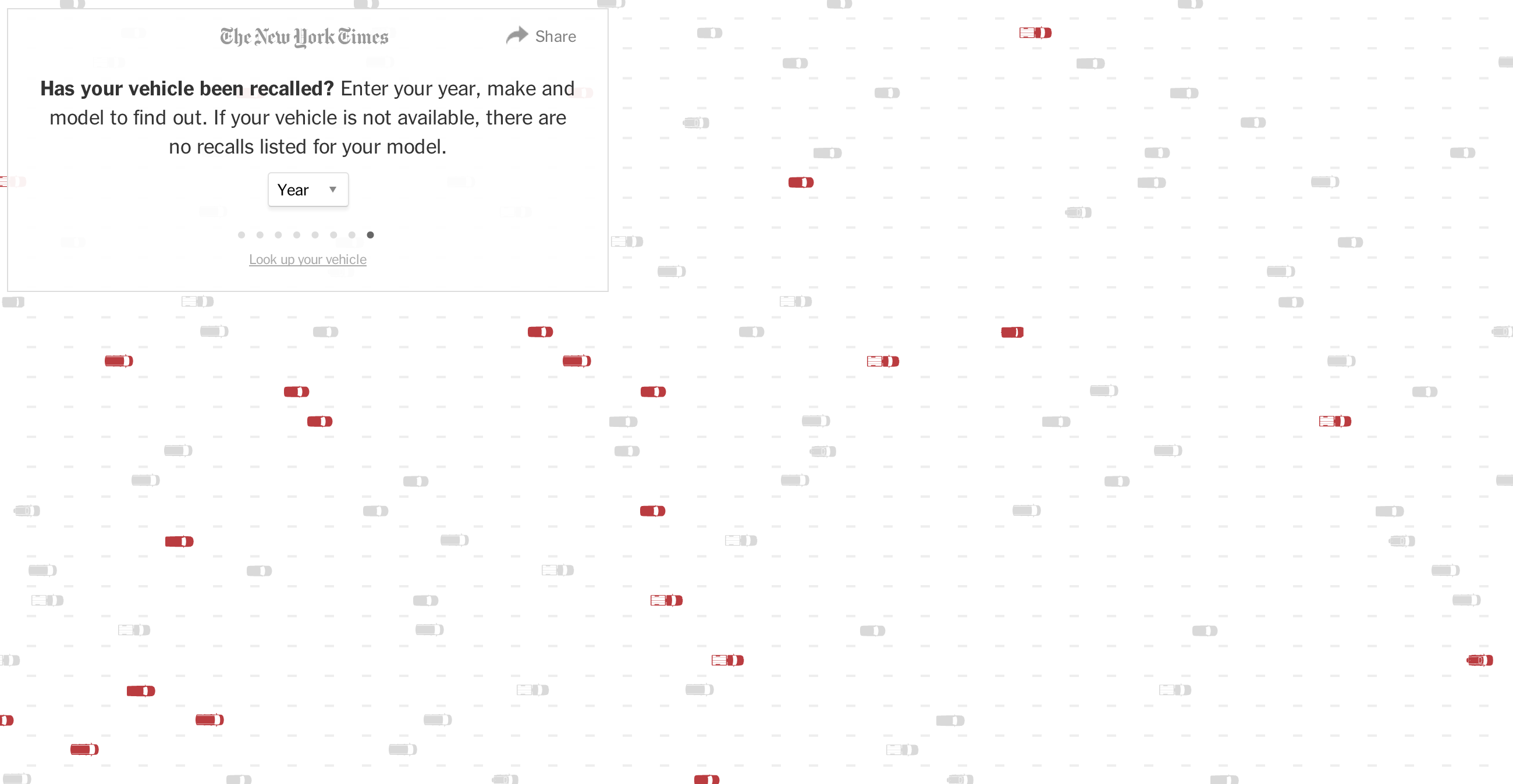 Anecdata: There’s a recent trend of collecting and publishing data that’s very specific to the author. Of course, it’s tricky to extrapolate one person’s results and assume they’re relevant to the reader, but the information is interesting nonetheless. Take this example from Chandler Abraham published on Medium. Abraham visualized every text or instant message he has sent since 2007 to the 25 people he contacts the most. You can spot all kinds of patterns in the 588,867 messages — like whether Abraham communicates more with old friends or new ones. 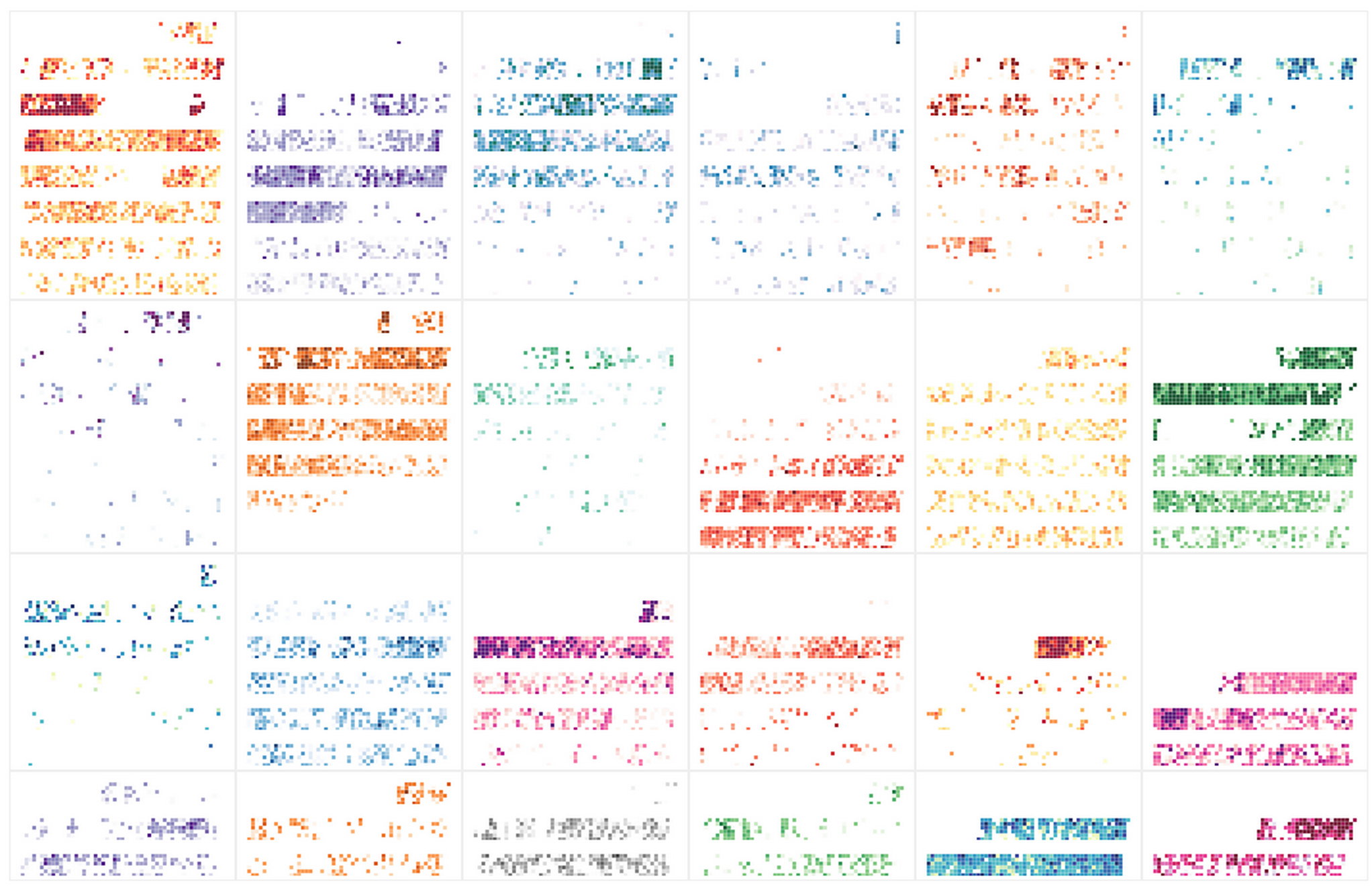 Parental advisory: If you’ve ever wondered about the sexual habits of Americans ages 50 and over, wonder no more.

Young money: We’ve long heard that millennials have a rougher deal than any other American generation. A recent study by the St. Louis Federal Reserve challenges that belief by looking beyond top-line net worth to consider indicators like bank deposits, home ownership, stocks held and retirement portfolios. The story that emerges appears to be a slightly more nuanced one. There’s more to it than unemployment and student loan debt — the decline of home values has had a considerable impact on the total wealth of Americans both young and old.

Biblical verses: Ellen DeGeneres’s celebrity selfie may have been the biggest tweet of the year in 2014 (retweeted 3.4 million times) but Twitter isn’t all about news and celebrity culture. On his blog openbible.info, Stephen Smith analyzes the biggest Bible verses of 2014 according to Twitter. With over 613,000 shares, the most tweeted verse was from Philippians 4:13: “I can do all this through him who gives me strength.” 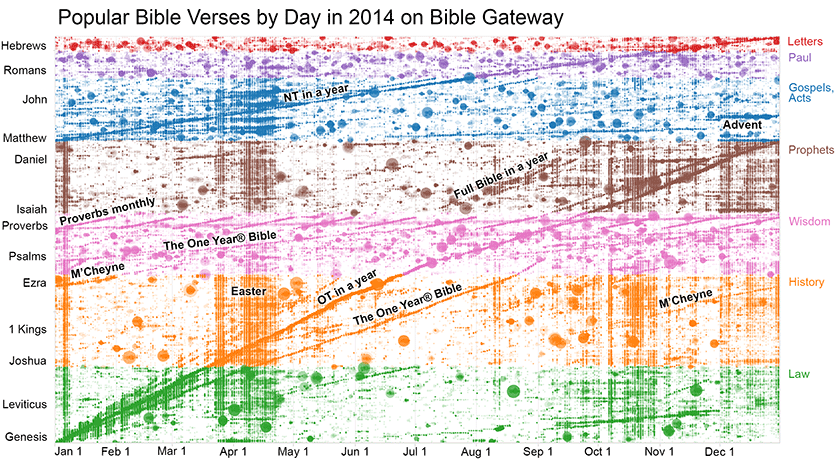 Resurgence: Another brilliant piece from The New York Times this week looks at why, after a brief lull in cases, Ebola roared back. The researchers and reporters describe how an opportunity to control the spread of the epidemic was lost — with dire consequences. 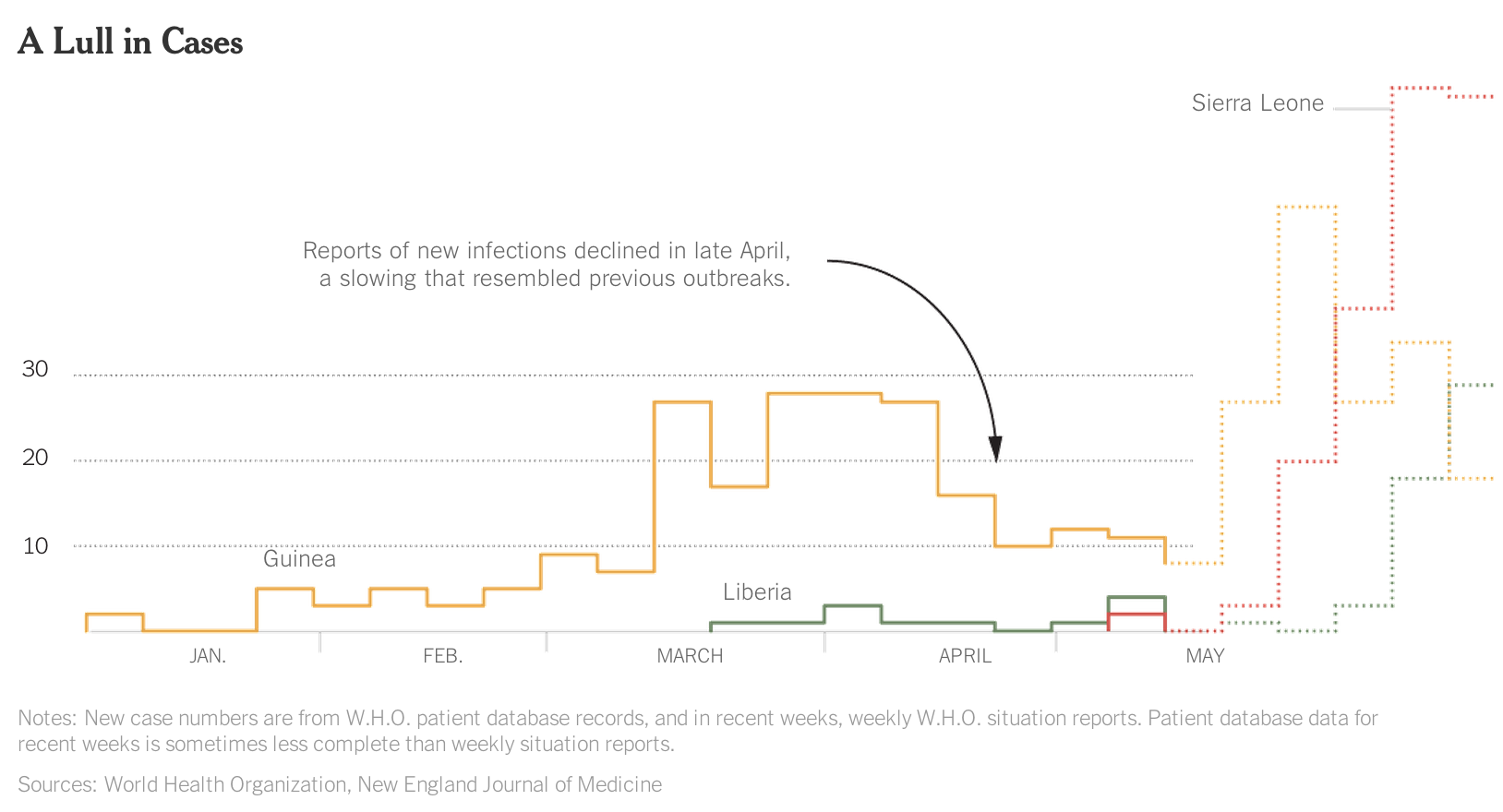 Whopper still whopping: Using CDC data, Helena Horton at Ampp3d shows how portion sizes at three major fast-food restaurants have barely changed since 1996. The only good news to come out of the research: While calorie numbers haven’t budged much, the use of trans fats has declined considerably. 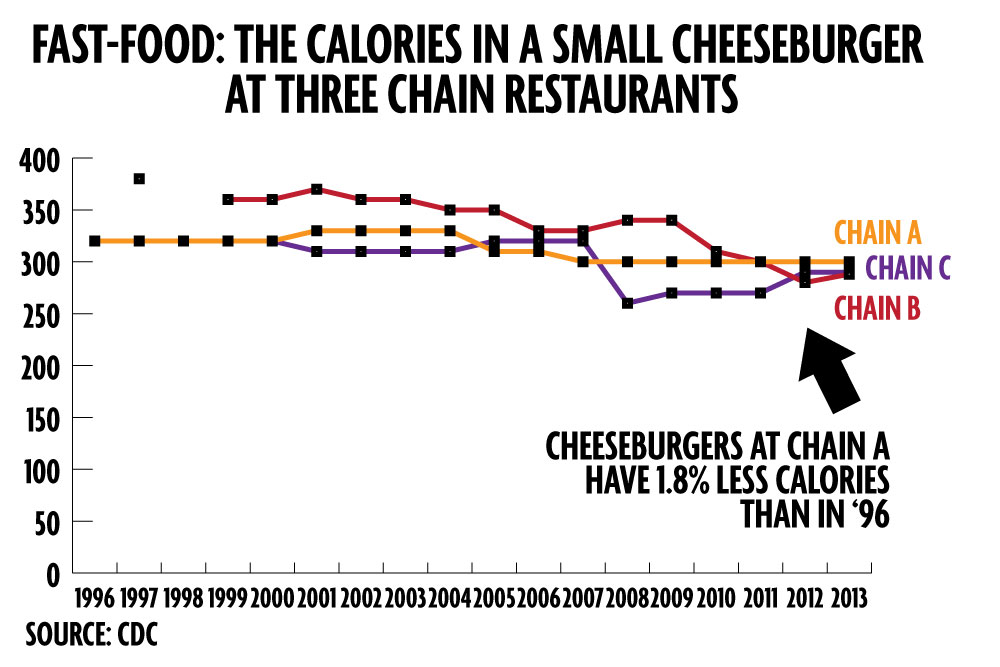