Tennis is played and followed in most nations worldwide. But professional players aren’t making much money. Fewer than 1,000 pro players break even at the sport. Far fewer make a decent living.

The opportunities to make good money are dwindling. More players are competing for prizes that are growing slowly, especially at the game’s lowest levels. Earlier this month, the ATP World Tour, which runs the most lucrative pro men’s events, announced it was increasing prize money significantly over the next four years. But the most exclusive tournaments will get the biggest boosts. After adjusting for inflation1, prize money on the ATP’s Challenger Tour — the equivalent of baseball’s AAA minor league — has fallen by 25 percent in the last six years.

Soon after the ATP’s announcement, the International Tennis Federation released results of its analysis of the pro game’s financials. Among the sobering findings: Only 336 men and 253 women made more than they spent playing tennis last year.2

In every pro sport, many compete for few lucrative slots. Tennis’s economics are particularly brutal. Players are individual contractors who have to cover their own transportation, equipment, coaching and — at some events — accommodation and food. Almost all of them have to supplement their winnings with sponsorships, support from their national federations or their families, odd jobs or all of the above.

The best 104 men and 104 women get safe passage to the four Grand Slam tournaments each year.3 They’re the players who have a chance to make a lot of money playing tennis. Lose your first match at each one last year, and you would still earn roughly $130,000. The rest of the players in the world are fighting for much smaller purses. The ITF estimates that the 4,978 men who won some prize money last year but weren’t in the top 1 percent earned, on average, a little over $13,000. The bottom 99 percent of the 2,650 women who earned prize money averaged about $22,600.

If you’re the 350th best man in the world at baseball, basketball, American football, ice hockey or soccer, you’re earning more than $500,000 each year, expenses paid. If you’re the 350th best man in tennis, you’re probably either falling into debt or getting help from a sponsor or parent. Tennis looks better financially for women than for men, relative to other sports, yet it’s likely that fewer than 200 women are earning a living from tennis prize money. 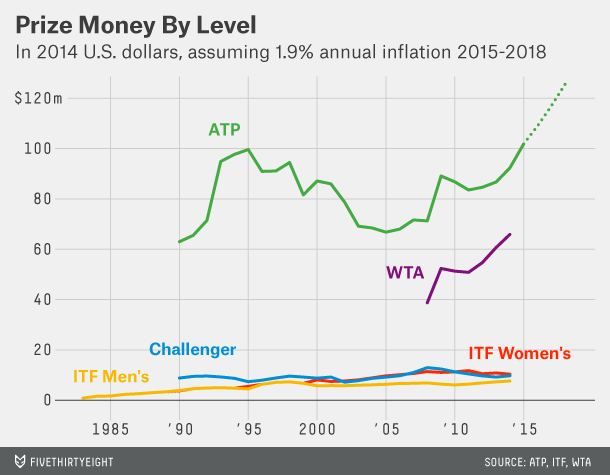 Tennis’s problem is that its fan base is wide but not deep. It has fans in countries around the world, but rarely enough to support a major tournament with sellouts and big TV ratings in any single market.

The ITF is considering how to divide the revenue among players in a way that’s best for the game. The nonprofit body is studying the sport’s economics to make sure that players who are good enough to break through don’t quit the game before doing so — and to hasten the departure of those who aren’t good enough. The ITF’s data shows it takes about a year longer now than it did in 2000 for a player to go from his or her first ranking to reaching the Top 100, which is another year during which promising players might get discouraged and drop their rackets.

“The last thing I’d want is for an exceptionally talented player to have to leave the game after a year or two, before they realize their potential,” Kris Dent, the ITF’s director of pro tennis, said in a telephone interview. “That’s something that drives what we’re doing, first and foremost.”

The ITF enlisted outside researchers in Australia and the U.K. for its study. It surveyed 7,605 players worldwide, three-quarters of them active professional players. Just 6 percent of women and 5 percent of men who responded said their prize money in their most recent year of professional play covered their expenses. More than half of men and women said they had to cut costs to a level they deemed unacceptable for hotels and the number and quality of tournaments they played.

The life most pro players lead is far from glamorous. They are concerned more with having enough balls and a good court to play on, than with paparazzi and endorsements. Players were asked in the survey where they’d be OK with cuts. Balls and facility maintenance were lowest on their list. In a recent post on Facebook, 22-year-old Tomás Buchhass of Argentina lamented “courts in a pitiful state which are a hazard to the physical well-being of the players” at a Chilean ITF event. And a photo of a shredded net on a practice court at a Tunisian ITF event made the rounds on Twitter last month.4

In one of the least surprising findings of modern polling history, nearly all players said prize money should increase. (Just who were the 12 percent of men and 21 percent of women who disagreed, the ITF couldn’t say.)

Dent agrees with players, to a point. He’d like to see less hardship for young players. For instance, he wants the lowest-level tournaments to cover players’ food and hotel costs in the form of a per diem; this year fewer than 4 percent of ITF pro events covered all players’ hospitality costs. That would help encourage players to travel to more tournaments. More prize money would help, too, but big increases aren’t realistic for most events. Below the top rungs of the men’s and women’s tours, there is little to no income coming from sponsorships, ticket sales or broadcast rights, Dent said. National federations, sometimes with grants from the ITF or the Grand Slams, generally cover costs, and aren’t likely to pay for big prize-money increases.

Many different bodies run the sport. Each of the four Grand Slams is run by the host nation’s tennis federation. The ATP runs the men’s tour, the WTA the women’s tour. For the men, the ATP handles the highest minor-league level, of Challengers, while the ITF runs the lowest-level pro tournaments, called Futures. For women, the ITF runs all events below tour level.

The ITF runs the least lucrative tournaments, so it doesn’t have much leeway to increase prize money at those. Dent wants to shrink the player pool so there is more money for each player. “We need to look at how we reward players who are progressing, but start to make it harder for players who aren’t,” he said.

Tennis isn’t likely to start forcing players to earn tour cards, as golf does. But Dent repeatedly cited golf as an example of a sport that properly “signposts” steps on aspiring pros’ journeys. Tennis, he said, needs to a better job of that. The point of Futures and Challengers isn’t to award enough money for players to live on, but to identify the best emerging talents and bestow ranking points so they can qualify for bigger, more lucrative tournaments. Toughening playing-down rules, which prevent players from competing at events below their level, are a way for the ITF to ensure that prize money and ranking points at entry-level events get divvied up among emerging stars, not established veterans.

Dent also envisions adding yet a lower level of competition — development events that cash-strapped national federations can support so that local players can afford to play without heavy travel costs. The events would have smaller draws and use officials with less experience than is required at current ITF events — while not skimping on costs for courts and balls.

“Already a number of developing nations, particularly in Africa, find it difficult to host events at the prize-money level we have,” Dent said. Nearly half of men’s prize money at ITF events, and more than half of ITF women’s prize money, was distributed at European events this year. 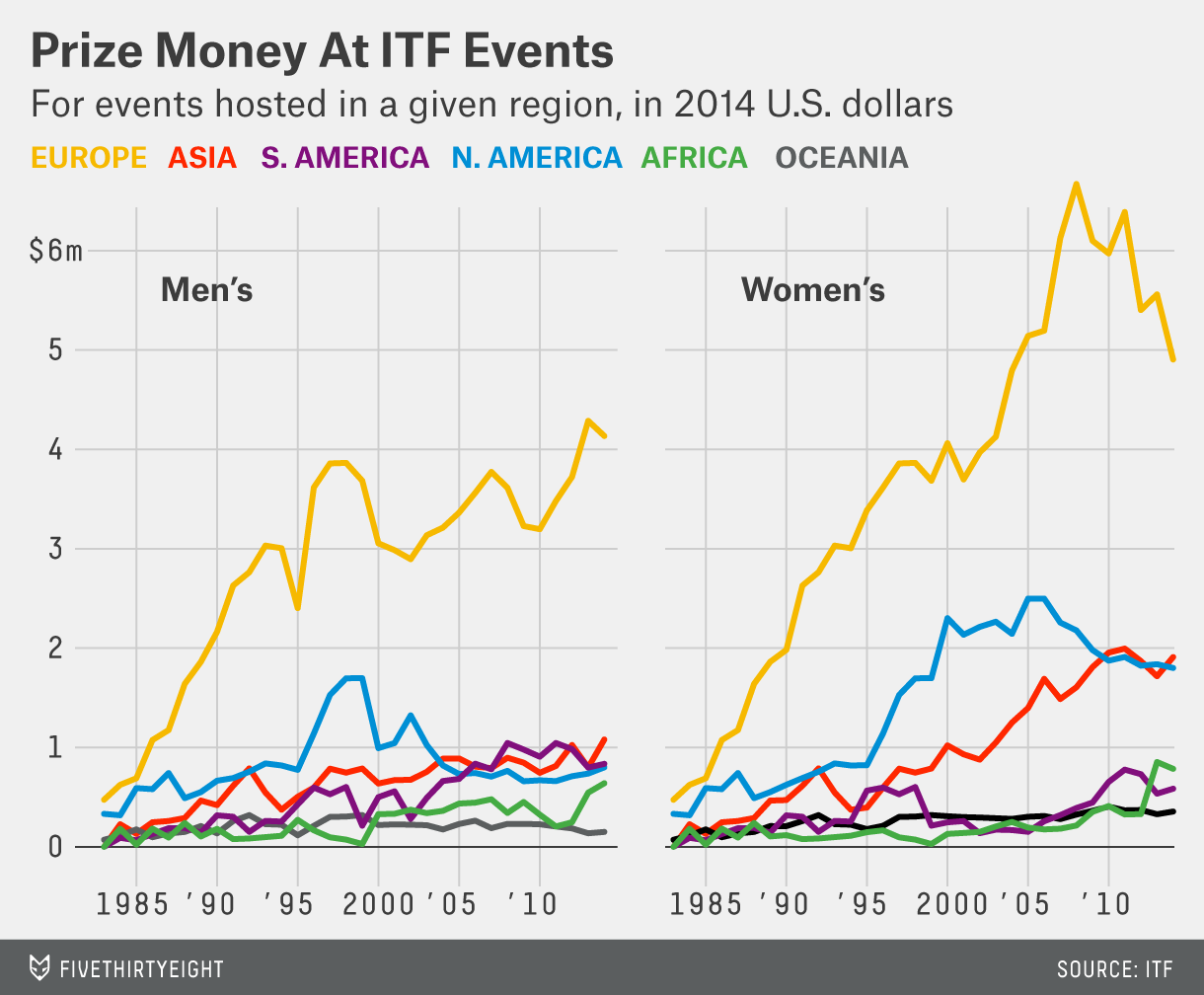 The pool of money for aspiring players could be growing soon. In March, the ITF Board will consider the idea of the development tour and other potential changes — including increases to prize money and hospitality — in light of the research. The ATP likely will increase prize money and hospitality spending at Challenger tournaments next year, too, according to a spokesman — which would reverse recent stagnation and decline.

The big money, though, remains at the top of the game — and the gap likely will widen. The ATP’s recently announced prize-money increases are biggest for the 500- and 1,000-level tournaments, which are the most exclusive ones, with increases of 50 percent and 54 percent, respectively, in 2018 compared to this year, after adjusting for projected inflation. The 250-level events, one notch up from Challengers, will increase prize money by just 6 percent. 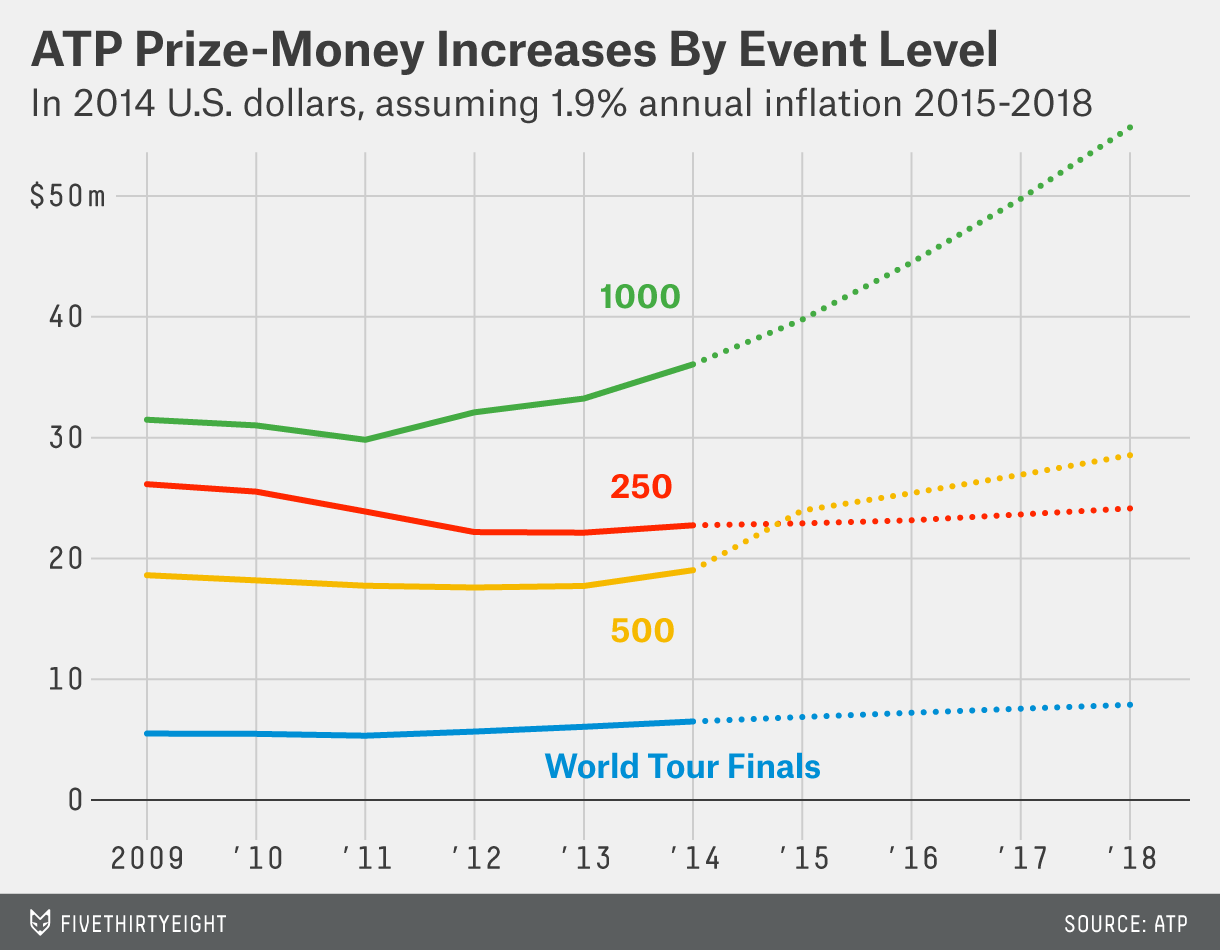