Take Ohio, where Gov. Mike DeWine was the first governor in the country to shutter bars and restaurants statewide, forcing patrons to dine at home. But even before DeWine’s March 15 order, restaurants were already feeling the impact of the coronavirus as customers began to avoid crowded areas in their cities. 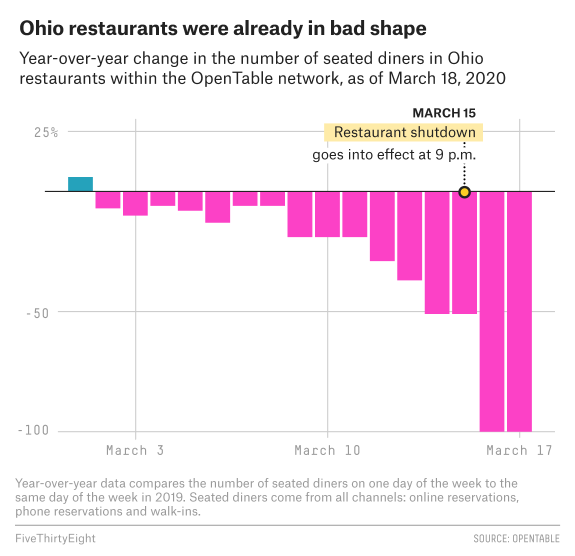 That chart shows the year-over-year change in seated diners, according to data from OpenTable, an online restaurant reservation platform.1 OpenTable services almost 60,000 restaurants worldwide, including 35 U.S. states and Washington, D.C., and while its data is not a random sample2 it does offer a glimpse into what’s happening in the restaurant industry nationwide. And what’s happening is not good.

Many restaurants are now paralyzed. Governors across the country have issued executive orders restricting or prohibiting seated dining in restaurants — 33 states so far,3 though all of the states are allowing take-away or delivery orders. The majority of these closures have come on the heels of updated guidelines from the Centers for Disease Control and Prevention recommending people avoid social gatherings of more than 10 people.

But no matter whether the governor has issued an order or not, restaurants in every state available in the OpenTable data set have experienced declining dining attendance over the last two weeks. As public pleas for social distancing get louder, diners are forced to order food for take-away or delivery, or simply to cook at home.

Diminishing clientele — and the diminishing profits that result — make it unsustainable for many restaurants to stay open and maintain fixed costs, let alone continue to pay wages. Some restaurants prepared to close even before the shutdowns took effect, citing consideration for the health and safety of the community.

Those that try to stay open have been fighting against a whiplash of regulatory changes. Restaurants in New York City, for example, which were told they had to cut capacity by 50 percent on March 13. Just three days later, they were forced to close their doors to diners altogether. Restaurateur David Chang, owner of the worldwide Momofuku restaurant group, noted the absurdity in drumming up a new, pared-back business model in the midst of a crisis and mocked the idea that pick-up and delivery would be a Band-Aid for forced closures.

It’s no secret many workers in the food and beverage and service industries live paycheck to paycheck and, as my colleagues pointed out this week, are among the most vulnerable in an economic crisis. And filing for unemployment can be a tedious process, because waiting periods and benefits vary state by state. Many business owners are still struggling to decide whether to furlough, lay off or hold on to employees in the midst of the coronavirus pandemic, which only creates more uncertainty for Americans about next steps. Amendments to the current process for filing unemployment (like these in North Carolina or these in New York) will be vital for the wave of workers who have lost their jobs.

As states continue to order restaurant closures, we’ll almost certainly see more abrupt drops in patronship like we saw in Ohio. To soften the economic blow, advocacy and nonprofit groups are calling for relief funds and resources to support laid-off workers and small business owners. But without tax relief or other forms of economic forgiveness from local and federal governments, it’s unclear how many will once again open their doors.

How should you social distance?