Kolby Ledbetter, 25, began worrying about the new coronavirus a few weeks ago, when it became clear that it was starting to spread in the United States. He works two jobs — a full-time job as an Americorps service member in Chicago and a part-time job at a bar — and at first, his main concern was for his health, since he doesn’t have paid leave at his bar job or health insurance to fall back on.

Then on Sunday afternoon, Illinois Gov. J.B. Pritzker announced that all bars and restaurants would be shut down for dine-in customers through the end of March. The bar where Ledbetter works closed the next day, leaving him with a whole new set of worries. “Even before all of this coronavirus stuff, I had a lot of financial anxiety because I was basically living paycheck to paycheck,” he said. “Now I have a lot of worry about my health, but I’m also terrified about my ability to stay afloat financially even if I don’t get sick.”

As dramatic measures to tamp down the spread of the virus are implemented across the country, workers like Ledbetter will likely be among the first to feel the economic effects. Big retailers like Gap and Columbia Sportswear are cutting their hours or shutting down entirely in an effort to slow the spread of the virus. And bars and restaurants have also been closed or restricted in a number of states beyond Illinois. On Monday, President Trump urged Americans in a press conference to avoid congregating in groups of more than 10 people.

According to data from the Bureau of Labor Statistics, workers like Ledbetter could be especially hard hit economically by the coronavirus, as part-time workers, very young or old workers, and workers in the lowest quartile of earnings are disproportionately likely to work in service industry or sales jobs.

Martha Ross, a fellow in the Metropolitan Policy Program at the Brookings Institution who studies the labor market, told us that workers like Ledbetter have few economic protections right now. “There are a lot of folks who don’t get paid leave if they get sick. They probably can’t work remotely, so they’re more likely to get sick if they do go to work,” said Ross. “And even if they don’t get the virus, they’re still at higher risk of losing their jobs or having their hours cut. They’re vulnerable no matter what happens.”

Crises have a way of exposing inequalities that linger uncomfortably below the surface when times are good. A few groups of workers are particularly likely to lack both paid leave and the ability to work from home: part-time workers, the youngest and oldest people in the workforce (those under the age of 25 and over the age of 65) and workers who fall below the 25th percentile of earnings.

Of course, some of these groups make up a bigger portion of the workforce than others. Workers over the age of 65 — who are also at elevated risk of a life-threatening infection because of their age — only make up about 5 percent of people with jobs, for instance. But part-time workers make up about 20 percent. Some of these groups may overlap — young workers, for example, are disproportionately likely to be part-time workers — but they still represent a sizable chunk of the country’s workforce. 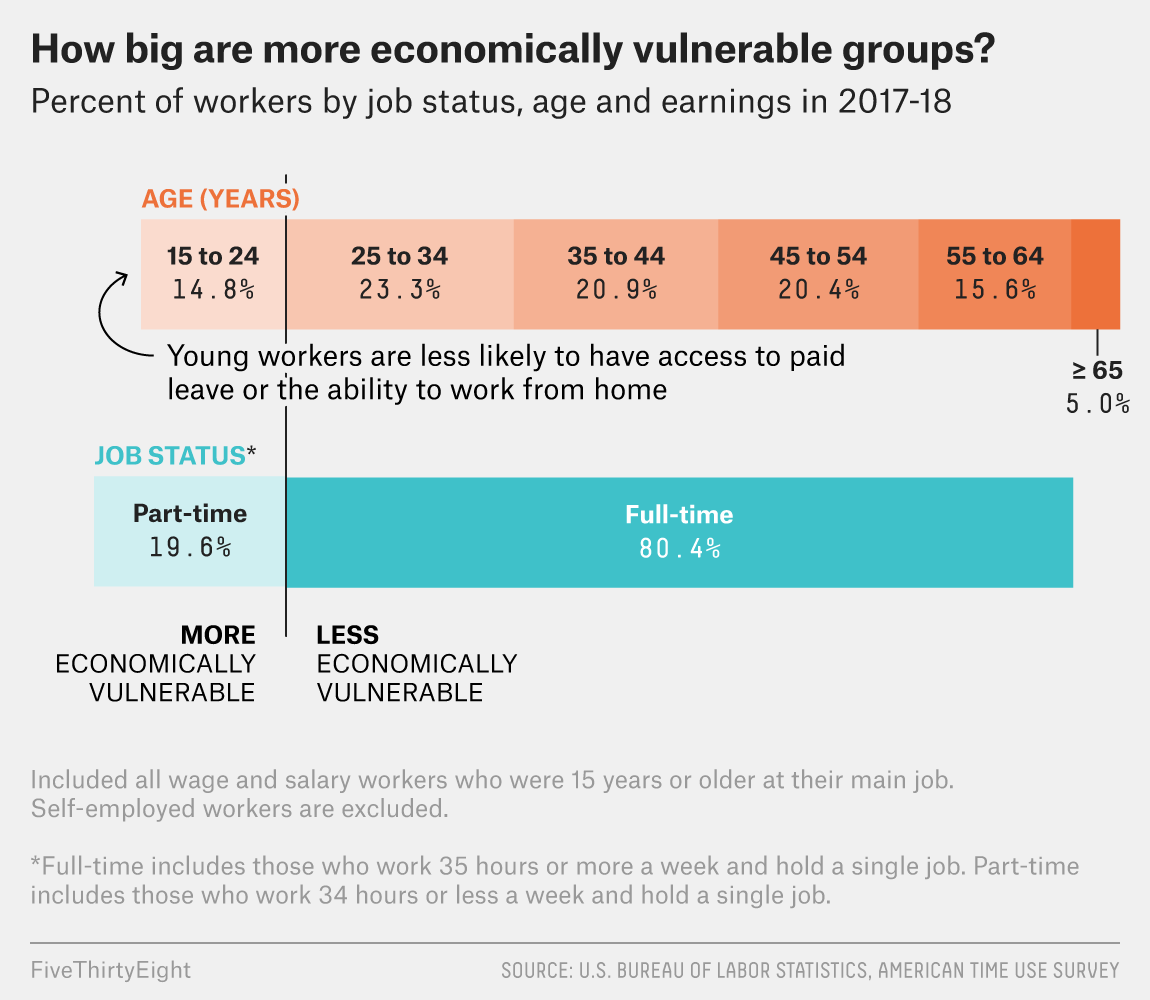 Many of these workers are employed in jobs that will be hard-hit by the recent wave of closures and cancellations, too. Almost one-third of part-time workers are employed in the service industry, which includes people who work in food preparation, and 25 percent work in sales. About 40 percent of workers under the age of 25 are employed in service or sales, too. Other research suggests that contingent workers — independent contractors, freelancers, or other people who work in the “gig economy” — are disproportionately likely to be affected, since they’re more likely to be young and to work part-time. And they typically have no access to paid leave or other benefits because their employment is only temporary. They also tend to make less than workers in traditional, permanent jobs. (The data wasn’t available from the BLS, but low-wage workers are also overrepresented in these sectors that will be hard hit.)

Lee Taylor, 31, a musician living in New York City, said she watched all of her work evaporate as bars and music venues across the city shut down, and she stopped being able to give voice lessons in person. “I’m getting three or four texts or emails every day, all saying the same thing — ‘“Unfortunately, we’re postponing.’” Taylor is in a particularly tough position as she can’t work remotely either. She has the money to cover her rent for April, but says she doesn’t know what she’ll do if the entertainment industry remains shuttered. “I have no idea how to get income.”

And Taylor is not alone. “It’s a bad week to be a waiter, or a cashier, or any kind of contractor whose work relies on in-person interaction,” said Jesse Rothstein, a professor of public policy and economics at the University of California, Berkeley. “Those people are going to see dramatic cuts to their income — their hours might be reduced, or they might lose their jobs altogether.”

Taken together, all of these factors create a bleak outlook, no matter what happens next. People who don’t have access to paid leave and the ability to work remotely are disproportionately likely to be low-income, which means if their workplace isn’t shuttered, they’re more likely to keep coming to work out of necessity, even if they’re not feeling well. That can put them at greater risk of being infected, since their coworkers may be doing the same thing. Research has found some workers in the food service industry kept coming to work even though they had symptoms of norovirus because they were afraid of losing their job or leaving their coworkers short-staffed.

And the possibility that many will lose their jobs or have their hours cut because of the coronavirus creates a whole new set of problems. A survey conducted by the Kaiser Family Foundation from March 11 to 15 found that 73 percent of workers with a household income of less than $40,000 a year, 68 percent of part-time workers, and 60 percent of self-employed workers are worried that they will lose income due to a workplace closure or reduced hours because of the coronavirus. According to that survey, part-time and self-employed workers are likelier than full-time or salaried workers to say they’ve already lost income so far.

If the shutdowns persist, some employers may go out of business, leaving workers who weren’t permanently laid off with no job to return to. “We have to start thinking about what’s going to happen when people can’t pay their rent or mortgage,” Rothstein said. “Because these workers are going to start burning through their savings — if they have any at all.”

CORRECTION (March 18, 2020, 4:26 p.m.): A previous version of this article gave an incorrect number for the share of part-time workers. About 20 percent of people with one job work part time, not 22 percent.

Ryan Best is a visual journalist for FiveThirtyEight. @ryanabest