This year’s NHL trade deadline saw quite a few transactions — 74 veteran players switched teams in the month leading up to (and including) the March 2 moratorium — and some of the moves could shift the league’s balance of power with the playoffs a little more than a month away.

In anticipation of Monday’s cutoff, we listed about 35 likely trade candidates and their possession metrics, to get a sense of who the advanced statistics would favor if any of them were dealt. But now that all the deals have been cut, how highly do the numbers regard the big names moved at the deadline?

It totally depends on which numbers you look at. Conventional stats — such as goals, assists and plus-minus, as synthesized into point shares above replacement (PSAR) — favor players like newly acquired Detroit winger Erik Cole. Cole bounced back from a pair of down seasons to average a goal every three or so games with a +4 rating (on a Dallas team that’s -11 overall) before being traded. That performance was enough to lead all deadline acquisitions in 2014-15 PSAR. But as we’ve learned, the NHL’s #EnhancedStats movement emphasizes more than traditional counting statistics.

Advanced metrics such as Corsi and Fenwick (ahem, “shot attempts” and “unblocked shot attempts”) started a trend in player evaluation of focusing on his ability to improve his team’s puck-possession rate while on the ice. If possession is a reliable path to team success, the reasoning goes, you want to stock your roster with players most associated with strong team possession rates when they’re in the game.

Now, Stephen Burtch’s Delta Corsi (dCorsi) and Domenic Galamini’s Usage-Adjusted Corsi have pushed attempts to isolate a skater’s effect on his team’s possession rate even further. The relatively new twist provided by those stats? Attempting to account for player-usage factors — such as position played, teammate and opponent quality, zone starts and even faceoff winning percentages in dCorsi’s case — on a player’s possession rate in addition to looking at on-ice versus off-ice differences.

In the past, you’d have to eyeball a player’s workload and usage as a means of context for, say, his relative Corsi. But these new stats attempt to bake those contextual factors into a single number by comparing a player’s actual possession rate to what we’d expect of an average NHL player at his position if placed in the same situations.1

You might think there’d be a decent amount of crossover between conventional numbers and these new possession-based advanced stats, but the correlation is practically nonexistent. Rescaling PSAR against an average baseline to make an apples-to-apples comparison, I found essentially no relationship with Burtch’s dCorsi Impact (which gives players more credit for maintaining strong possession rates relative to average in greater amounts of ice time) this season: 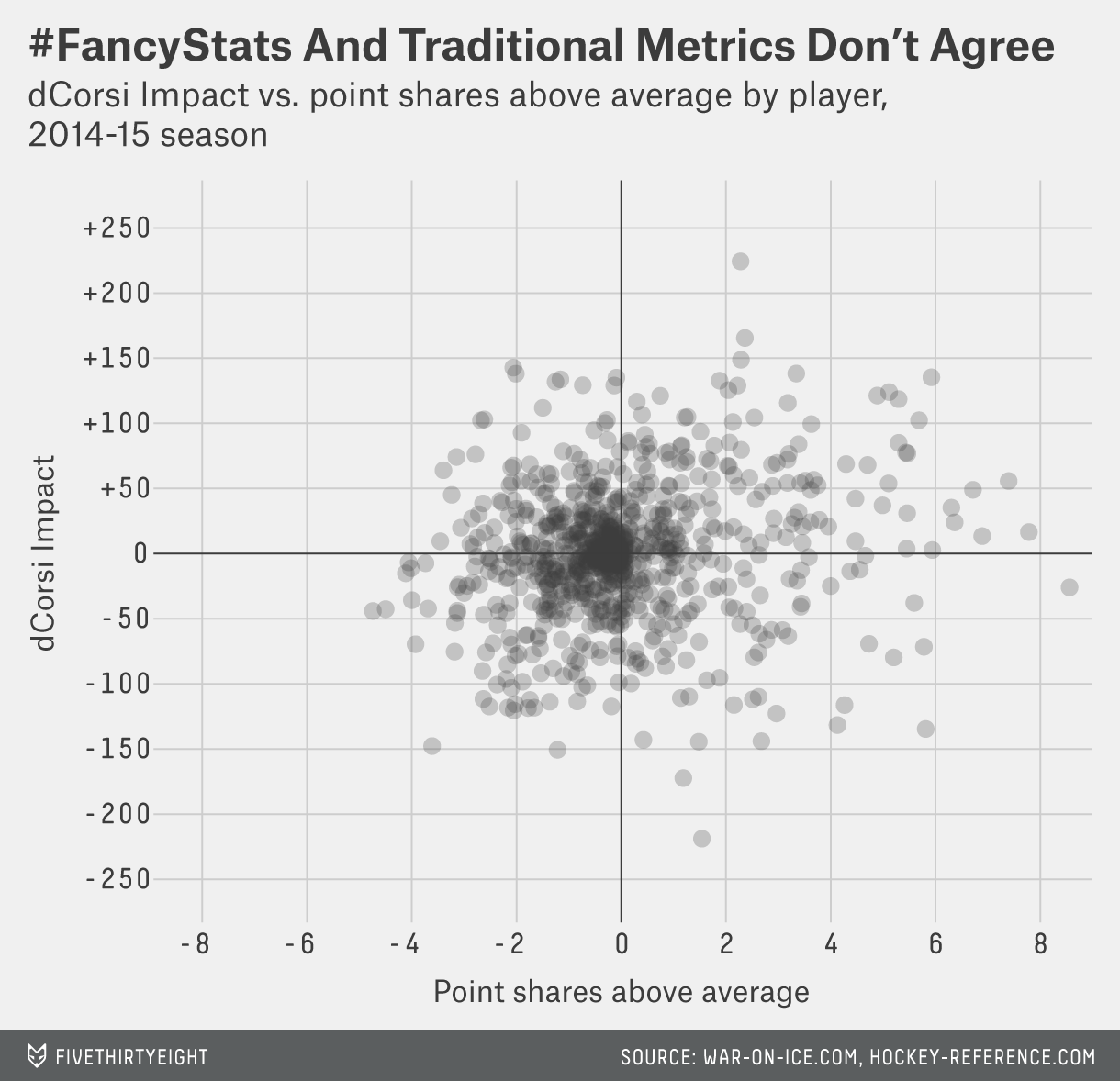 Take Cole again. Despite his solid counting stats and a very good point share tally, Dallas’s possession rate when Cole was on the ice was actually lower than what would be expected from an average player in the same situations with the same teammates and opponents. Or take FiveThirtyEight favorite Jaromir Jagr, whose relatively down conventional stats belie a player still capable of driving play with the proverbial skills that don’t show up in the box score.

They’re not alone among the bigger-name deadline acquisitions. Much was made when the Arizona Coyotes shipped away center Antoine Vermette and defenseman Keith Yandle. Both players were solid PSAR contributors for Arizona this season but also ranked among the least valuable dCorsi players at their respective positions.

Meanwhile, Zbynek Michalek, another former Coyote, boasted extremely unimpressive counting numbers (8 points and a -6 rating in 53 games) even by the standards of his position but ranks as one of the best defensemen in hockey according to dCorsi Impact.

In case it wasn’t clear by now, all this goes to show that it’s nearly impossible to guess whether a player is a possession star or scrub based on his conventional numbers. As is the case with most of these new-school-versus-old-school metric battles to recently crop up across almost all sports, a player’s true value probably lies somewhere in between. But in hockey, that fact just underscores how little we still know about who’s helping and hurting their teams.