On Monday, we posted “Are Pro Wrestlers Dying at an Unusual Rate?,” showing that wrestlers from the WWF era have passed away at a clip far exceeding actuarial expectations. One of the most common questions I received about the blog post was how wrestlers compared to other professional athletes.  Here’s commenter Matthew Durst:

Is this phenomenon unique to wrestling or is it a cost of doing any professional sport? What’s the years of life loss on average for the big 4 sports?

To investigate, I used ESPN’s athlete bio database, pulling out anyone who had played at least five seasons in any of the Big Four sports (football, baseball, basketball and hockey). I used the same five age groups (35-40, 40-45, 45-50, 50-55, 55-60) that I did for the wrestling analysis, except as of Dec. 31, 2010 (the most recent year for which we have data). I used only athletes whose careers had ended in 1998 or earlier (to match the period I looked at for the WWF, which changed its name to WWE in 2002). Then I took the simple percentage dead from each age group, as before: 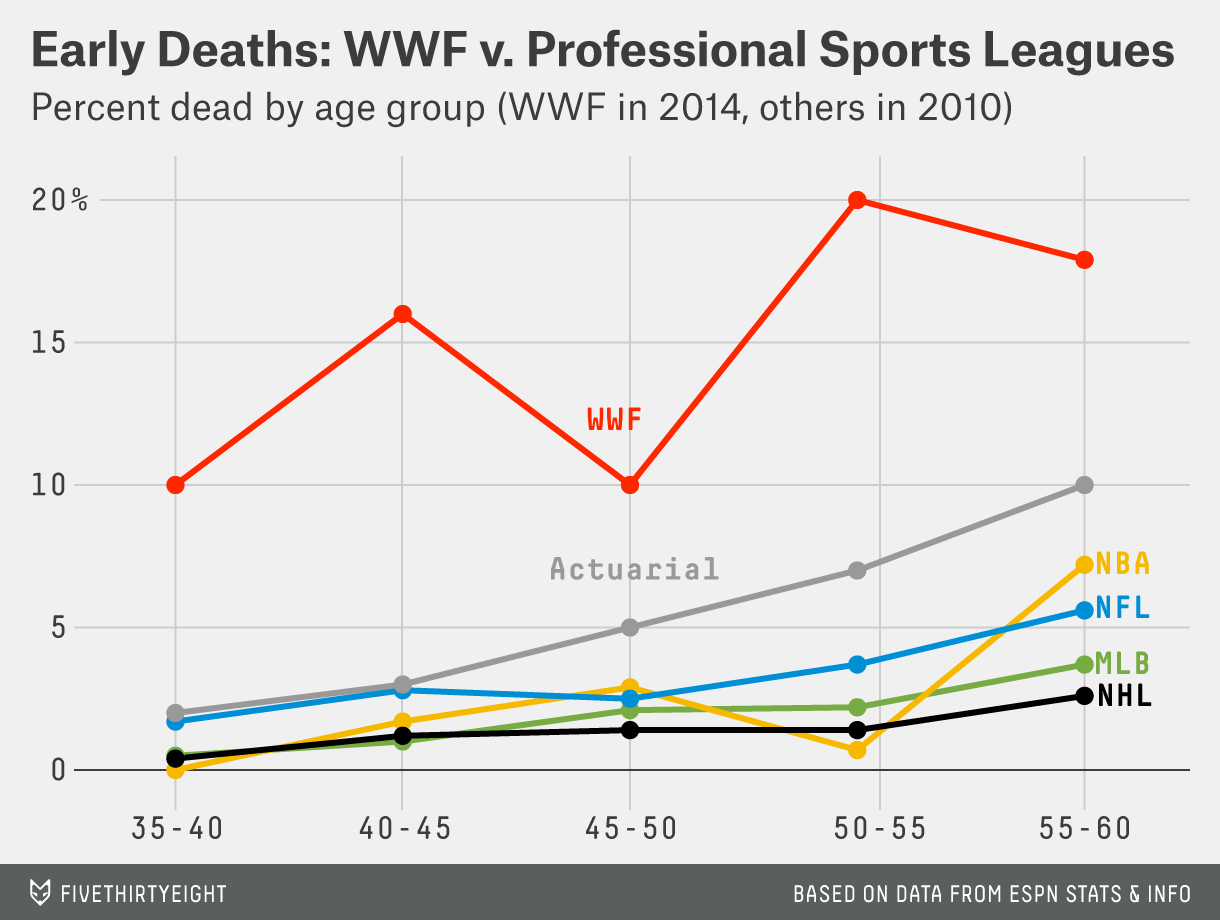 Outside of the WWF, professional athletes beat actuarial expectations. The NFL — which is commonly portrayed as being one step up from the Ludi —  at the very least doesn’t appear to produce many early deaths. Even offensive linemen, whose curve would be a bit higher on the grid, come in well under average (with about 4 percent dead in the entire age range).

Though a bit surprising, there are good reasons why we might expect successful pro athletes to be better than average at surviving the 35- to 60-year-old period of their lives. They make a lot of money during their careers and have fairly good job prospects (relative to average) thereafter. They operate in a disciplined, highly regulated environment during a formative period of their lives and face extensive drug testing. Not to mention, these athletes are highly skilled and physically honed professionals. Their bodies may take a lot of damage that may stay with them for the rest of their lives, but it’s not the kind of damage that typically leads to an early grave.

Wrestling in the WWF era, on the other hand, is reputed to have had a party culture, extensive performance-enhancing and recreational drug use, training focused on more aesthetic than functional physical improvements, a brutal schedule, and fewer monetary rewards than fans might think.