I was barely 13 years old during WrestleMania VI on April 1, 1990, and just about at the height of my pro-wrestling fandom. I watched every televised event and read wrestling magazines, and I had been to a live event at the Blaisdell Arena in Honolulu. I even watched unofficial wrestling-analysis shows that aired in the middle of the night. I was delirious.

My favorite wrestler was Brutus “The Barber” Beefcake, who took on “Mr. Perfect,” who had yet to lose in a televised head-to-head matchup. Brutus won. “Mr. Perfect,” a.k.a. Curt Hennig, had finally lost.

Of course, the main event at WrestleMania VI was the “Ultimate Challenge,” in which The Ultimate Warrior defeated Hulk Hogan to unify the Intercontinental Championship and the WWF Championship for the first — and so far only — time ever (the WWF changed its name to the WWE in 2002).

Here are a few other pieces of information about WrestleMania VI:

Here’s the card with all of the televised matches for the night. I’ve marked the ones who are dead in red; it’s one-third of the wrestlers who appeared (12 of 36, plus Miss Elizabeth). 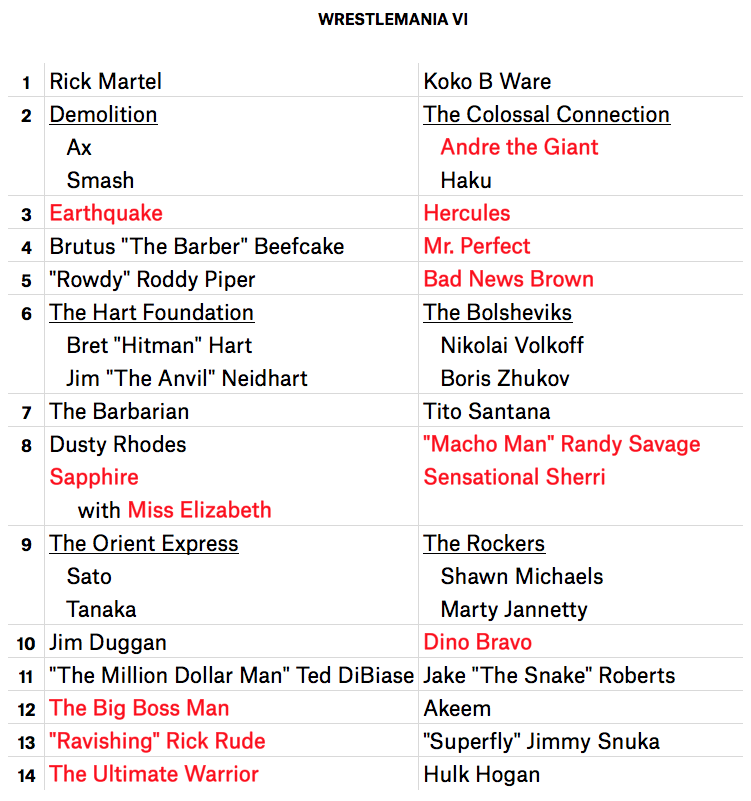 For all the dramatized bloodshed of professional wrestling, the card for WrestleMania VI certainly looks like a bloodbath. Is there anything fishy about pro wrestling, or are my intuitions about what percentage of young 1990s athletes should be alive 25 years later just way off?

Let’s look at some data.

I collected biographical information (including date of birth and date of death, if applicable) from the Internet Wrestling Database on all WWF wrestlers who are/would be younger than 60 in 2014, and who had at least 20 pay-per-view appearances between WrestleMania I in 1985 and the time the WWF was forced to change its name by the World Wildlife Fund in 2002 — for 203 in all.

I then broke them down by age groups and compared each group’s death rate with its expected death rate:

We can also calculate the probability of so many wrestlers dying in each age group and overall by chance (using binom.dist), and it comes out like so:

Note: I calculated each wrestler’s odds individually, but the probabilities in the last column of this table are based on the average probability for each group (which gets us extremely close, though technically it could be calculated precisely).

I don’t want to speculate as to the cause of this phenomenon, though a number of theories in varying shades of sinister spring to mind. But it saddens me to think that my 13-year old self was so thoroughly entertained by watching ghosts. Rest in peace.