It’s a refrain almost as common as “Merry Christmas” this time of year: There are too many bowl games. While hardcore college football fans don’t mind watching, say, the Miami Beach Bowl on a Monday afternoon a full 10 days before the traditional bowlfest of New Year’s Day (guilty!), there’s also the sense that the bloated bowl season has taken away much of the meaning that used to be associated with playing in college football’s postseason.

How much expansion has there been? This season will see a record 39 bowl games played, from the Popeyes Bahamas Bowl to the College Football Playoff National Championship. Compare that to 1968, when there were 11 bowls, or even 1984, when there were 18 — a total that would remain more or less static for more than a decade. But in the late 1990s (perhaps not coincidentally, when the Bowl Championship Series began), the bowl field began expanding rapidly, reaching 20 games in 1997, 25 in 2000 and 32 in 2006.

In the chart below you can see the proliferation of the bowl field since 1982, the year cable television money and the departure of the Ivy League from Division I-A ushered in college football’s truly modern era: 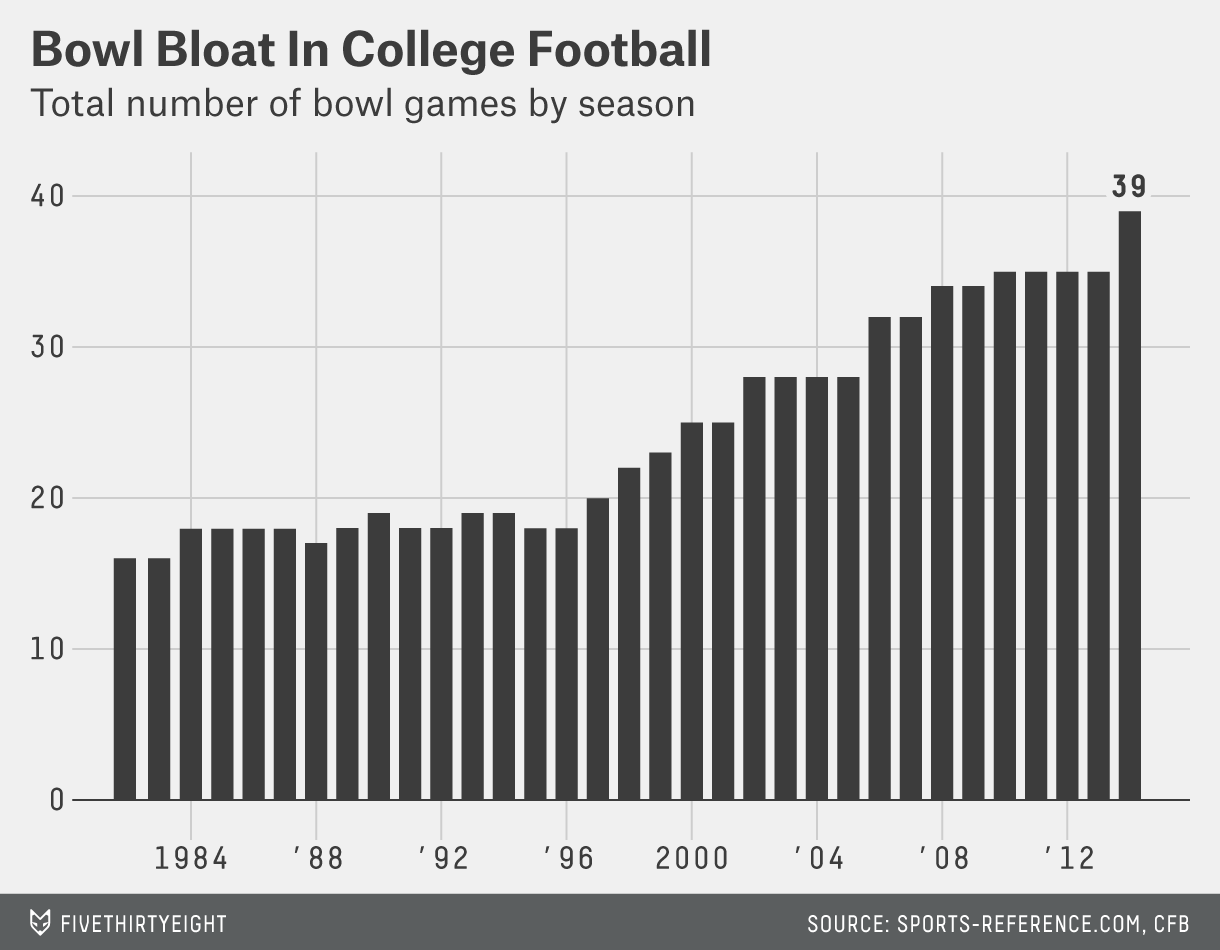 Some of the bloat is associated with an increase in the number of Division I-A (now known as the Football Bowl Subdivision, or FBS) football teams, to 128 this season from 113 in 1982. (A chunk of these new additions have come in just the past few seasons, as part of what FiveThirtyEight contributor David Goldenberg calls a “recent trend of universities starting football programs from scratch with the plan to get to Division I as soon as possible, and reap the PR and financial benefits that come with a major football program.”)

But the growth of the FBS only explains a small portion of the bowl explosion. Even as a percentage of all FBS schools, almost twice as many teams will go bowling this season as did in 1996: 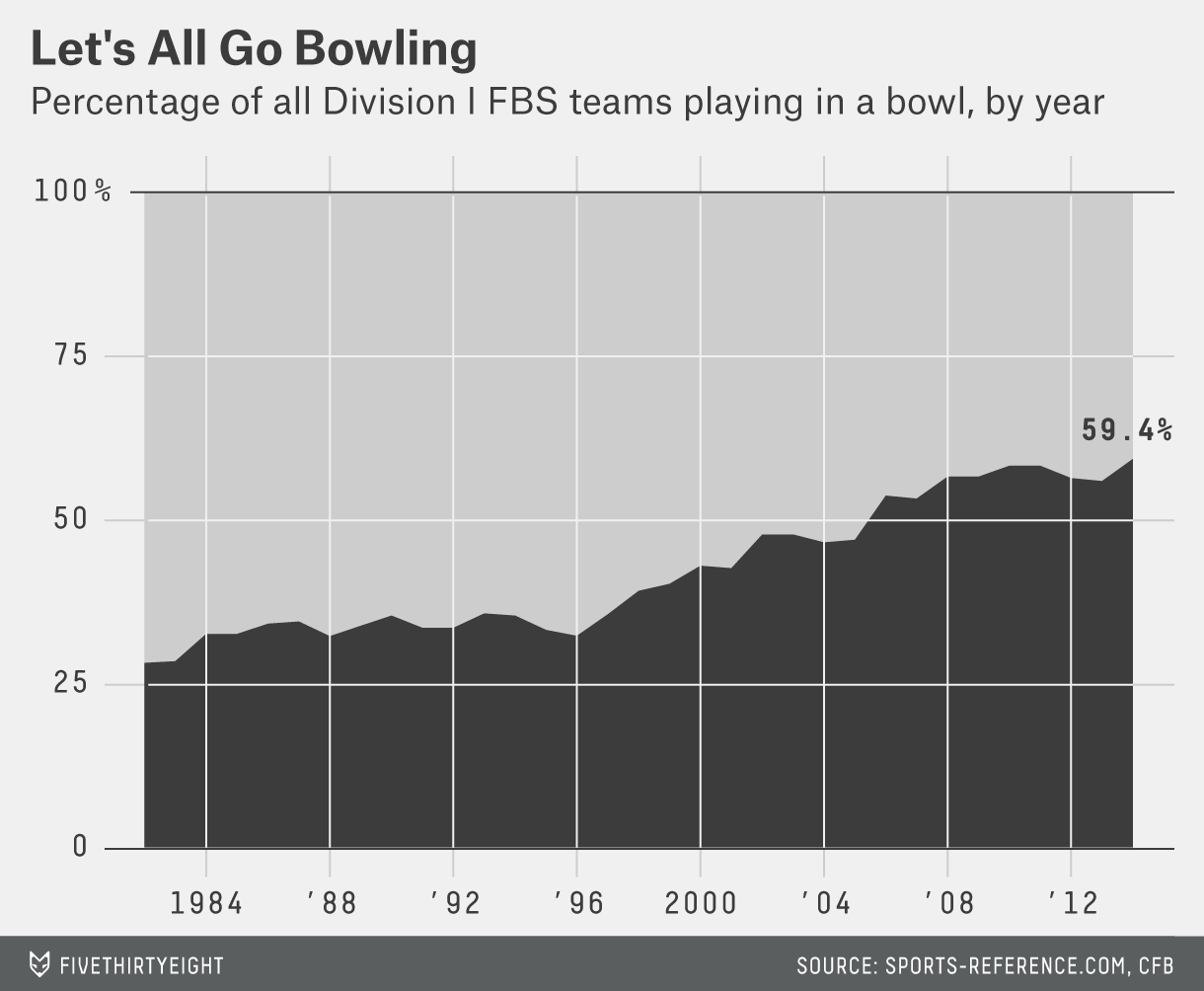 Economically, there are pros and cons to the inflated bowl field. And these games do matter football-wise, especially to a certain subset of mid-major programs looking for exposure any way they can find it. But, as a natural byproduct of expansion, the caliber of teams in bowls has plummeted over the past three decades.

Using an Elo-like estimated version of ESPN’s Football Power Index (FPI) pre-bowl ratings, here is the progression of the average, worst, and 25th-percentile teams in the bowl field for each season since 1982: 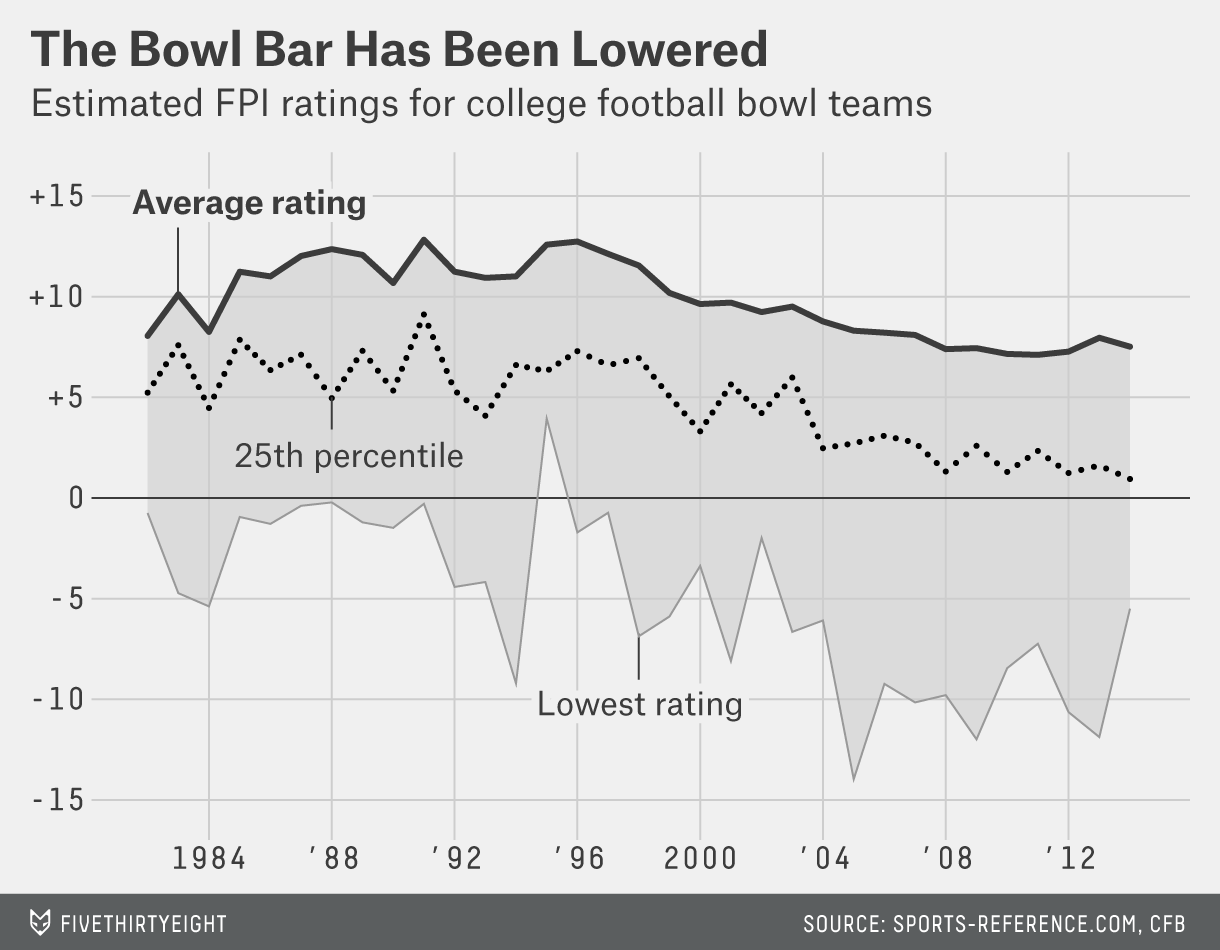 The average rating for bowl-bound teams is barely lower now than it was in 1982, and the fact that it crested in 1996 — right before the bowl boom — suggests that there were enough good teams to support some type of expansion in the late 1990s. (Why this change took place is up for debate, though it could point to the origins of today’s ongoing trend of reduced parity between college football’s haves and have-nots.)

However, the trend lines describing the dregs of the bowl field (the minimum and 25th-percentile ratings) show how much the bar for bowl entry has been lowered since that time. Bad teams occasionally made their way into bowls before 1997, but that’s now commonplace, particularly since the number of bowl entrants has grown by 39 percent since 2005.

Monday’s Miami Beach Bowl thriller, between Memphis and Brigham Young, showed that less prestigious bowl games can still provide excitement for fans that bother to tune in. But it’s also fair to question whether we really need to see FPI No. 95 South Alabama and No. 97 Bowling Green (both considered to be in excess of 8 points per game worse than an average FBS team) face off in the Raycom Media Camellia Bowl — as happened on Saturday. Like so much in college football, the bowls are an as yet incomplete experiment in where to find a happy medium between tradition, money-making and the role of academic institutions in the world of high-profile sports.