The University of Alabama at Birmingham knew its football team was going to have to battle for survival from the start. In 1996, its first year of Division I-A ball, the team’s slogan was unusually defensive: “We’re here to stay,” the omnipresent banners and billboards around Birmingham read. Less than 20 years later, the team is gone.

On Tuesday UAB President Ray Watts announced he was shuttering the football team, citing a study from an outside consulting group that determined the program would need to dramatically increase its operating budget in order to remain competitive. “We have considered many options to fill this financial gap, including through philanthropic support; but our informed analysis of current and past support and interest concluded that the gap is simply too wide,” Watts wrote.

UAB faced two major problems, one of which was specific to its circumstances, and one of which is staring down all universities that have recently tried their hand at big-time football.

The University of Alabama never wanted UAB to be a competitor, making life difficult for UAB even before a team arrived. Even though the two institutions share a board of trustees and a medical school, Alabama has been leery of UAB’s foray into major sports since Gene Bartow left his job as UCLA’s head coach to found UAB’s basketball team in 1978. Citing a range of grievances over recruiting and fan support, Alabama has refused to engage UAB on the court or on the gridiron. The Tide have faced the Blazers only once, in basketball, when they were pitted against each other in the National Invitation Tournament. UAB didn’t help matters by winning 58-56.

In 1989, Bartow, UAB’s athletic director, started to put together a football team. Alabama’s athletic department was not happy. Its head coach, Bill Curry, was particularly adamant: “Not only would we not play them, we don’t understand why they are talking about bringing another football team into the University of Alabama system,” he said at the time. “I’m the only [football] coach in the University of Alabama system. We don’t need another football team at one of our other campuses.” In 1991, Bartow sent a letter to the NCAA accusing former and current Alabama coaches — including Bear Bryant — of recruiting violations.

The system’s board of trustees has tended to represent Alabama’s interests over UAB’s, perhaps because the large majority of them are alumni of the Capstone. (Trustee Paul Bryant, Jr., for example, is the son of the legendary coach.) They’ve blocked UAB’s attempts to move out of the cavernous and decaying Legion Field and into a new stadium, and they nixed a deal for UAB to hire Jimbo Fisher, who would go on to win a national championship with Florida State.

But even if the Blazers hadn’t been undercut by their own trustees, they still would have had a tremendous hill to climb, one that’s getting steeper every year as the gap between the haves and the have-nots of football continues to grow. UAB was in the vanguard of a recent trend of universities starting football programs from scratch with the plan to get to Division I as soon as possible, and reap the PR and financial benefits that come with a major football program. Nine other universities that are in or are about to join the Football Bowl Subdivision have started football programs since UAB did, and they share several commonalities.

All of them are based in the South, and all of them felt they had a chance to succeed because of the prestige of the game and the fertile recruiting grounds in the region. But they’ve found it incredibly expensive to field a competitive FBS program. They all have losing records against fellow FBS schools, and they all receive substantial subsidies in order to keep their athletic departments afloat. They’ve had trouble attracting supporters, perhaps because most football fans in the region are already loyal to other teams. And as the Big 5 power conferences start to crank up the financial pressure — both with lavish spending on facilities and upcoming allowances for players — it’s possible that some of these programs could join UAB on the sidelines. 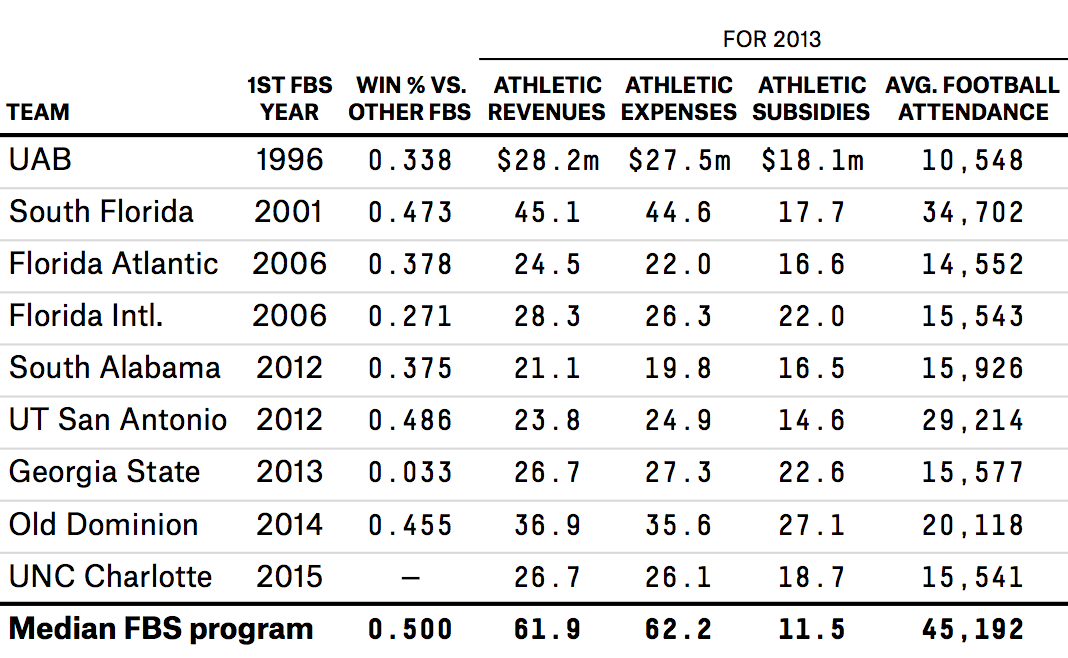 Only one of the new teams looks like it’s making the leap to sustainability. South Florida not only has the highest attendance and lowest subsidy percentage of the bunch, it’s also the only school that’s made it out of the C-USA and Sun Belt Conference dregs and into the relative comfort of the American Athletic Conference. (That said, the team has regressed recently, winning only six games in the last two years.)

The rest of the teams look a lot like UAB with slightly better attendance. They bring in far less than the average FBS athletic department, and all their athletic departments receive at least 60 percent of their revenues in subsidies — meaning that a combination of student fees, institutional support and state funding are used to cover the majority of their expenses.

In his letter to UAB faculty about the shutdown, Watts specifically cited the huge subsidy as a reason the football team had to go, along with an unwillingness to shell out even more cash for upgraded facilities. If that’s actually the case, and cold numbers rather than system-wide infighting cost UAB its team, then there are plenty of other programs facing similar deficits.

Watts claims the UAB athletic budget will stay the same even after the football program folds, meaning that more resources can be put toward other sports, including the basketball team, which has recently fallen on hard times after years of winning seasons. Perhaps UAB can look to the success of Virginia Commonwealth University, its former Sun Belt Conference foe, which eschewed the lure of football to focus on basketball. The Rams now play in the hoops-centered Atlantic-10 and regularly make deep runs in the NCAA tournament.

Making the Blazers’ basketball team into a powerhouse won’t be a simple task. But it will certainly be easier than the existential struggle its football team just lost.