Now is not exactly a great time to be Philadelphia Eagles QB Carson Wentz. The former MVP candidate played miserably in Monday night’s loss to the Seattle Seahawks, going 22-for-41 with 157 yards (3.8 yards per attempt), one touchdown, one interception and a 60.7 passer rating in the first 58 minutes of the game before padding his stats with a totally meaningless garbage-time TD pass. According to our QB Elo metric, it was Wentz’s ninth below-average performance in 11 starts so far this season and his fourth in a row. (The Eagles actually won one of those four, but only because Dallas QB Ben DiNucci was equally bad). According to schedule-adjusted expected points added (EPA) per game, Philadelphia has had the NFL’s third-worst passing offense of 2020 — only the Jets and Broncos1 are worse — which is a big reason that the Eagles’ playoff chances are down to 23 percent despite playing in possibly the worst division in football history.

How did a quarterback who was the toast of the league in 2017, starting the majority of games for the team that eventually won the Super Bowl, hit rock bottom like this? In truth, Wentz’s struggles have been building for a while now. Aside from a brief surge late last season, his QB Elo rating (relative to an average starter) has very steadily dropped from its peak in November 2018: 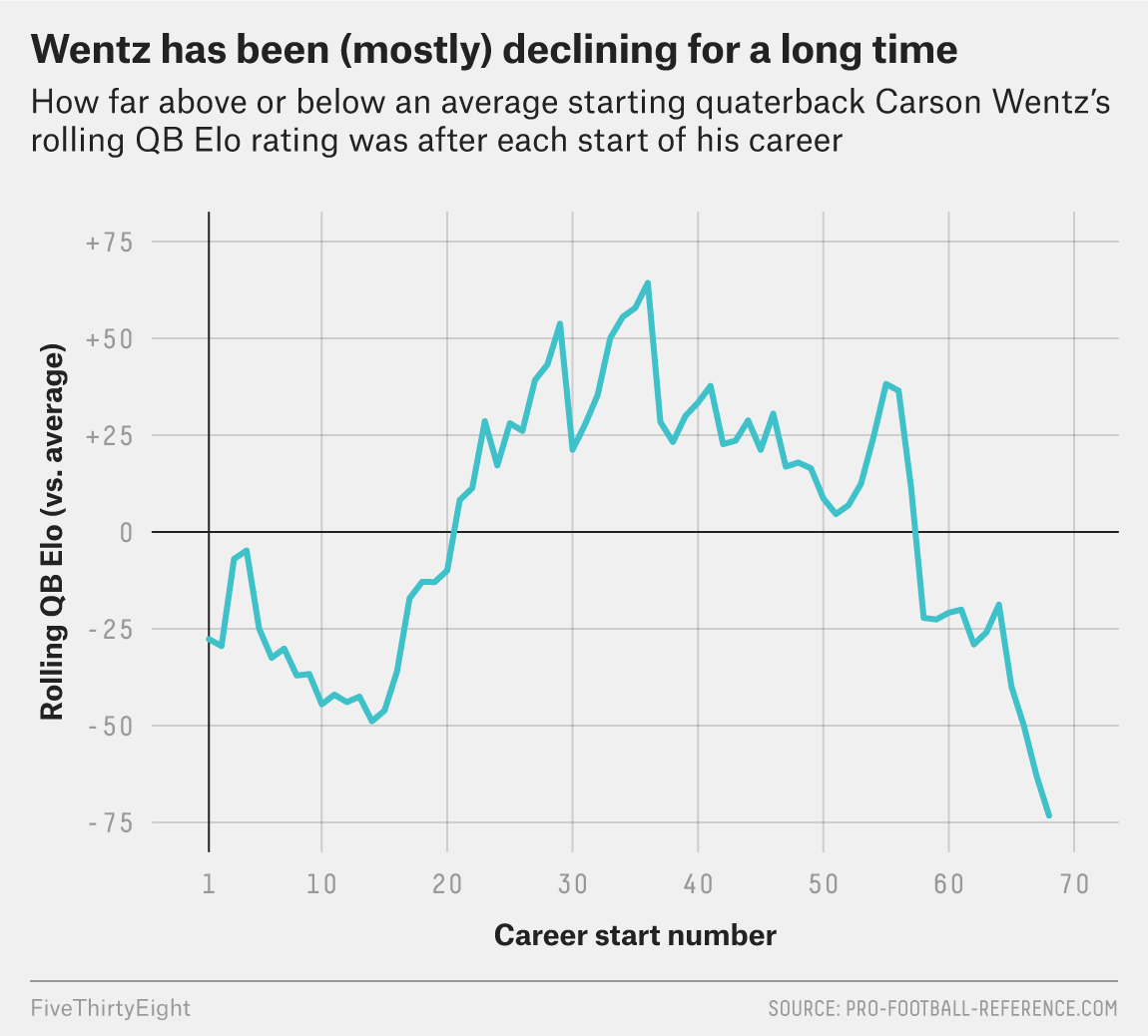 Some alarming stats on #Eagles QB Carson Wentz, via @NFLResearch… including having one of the biggest dropoffs in NFL history compared to his passer ratings from the previous 3 years pic.twitter.com/grIH7nZJ8G

In some ways, Wentz’s descent mirrors the overall deterioration of the Eagles’ roster since Super Bowl LII. A team that was once overflowing with talent — built strong from the trenches out — is now wrecked with injuries, featuring one of the worst offensive lines in the league, an inexperienced receiving corps and one of the league’s least cost-effective rosters.

So, no, Wentz doesn’t have much to work with. And coach Doug Pederson’s play-calling hasn’t always put Wentz in a position to succeed. But as analyst and YouTuber Brett Kollmann points out in his breakdown of Wentz, this has also fed into some of the quarterback’s worst impulses. Specifically, Wentz has tended to play entirely too much “hero ball” this season: According to NFL Next Gen Stats, he’s forced 18.5 percent of his passes into tight coverage — defined as throws where the receiver had less than a yard of separation when the pass arrives — which is the fifth-highest share of any qualified QB in 2020, and he’s completing only 37.2 percent of those passes (well below the league-average of 65.4 percent on all throws). Overall, Wentz has attempted the league’s fourth-most-difficult collection of throws according to Next Gen Stats, with an expected completion rate of just 61.8 percent.

Unlike Green Bay’s Aaron Rodgers, who also attempts difficult throws but completes more of them than he “should,” Wentz is actually completing far fewer passes than he ought to — even after adjusting for their difficulty. By Next Gen Stats’ estimation, Wentz’s completion percentage is 3.7 points lower than we would expect based on the characteristics of his throws alone, the third-biggest shortfall in the NFL. Because of his poor mechanics, which hurt accuracy — nearly 29 percent of Wentz’s throws have been off-target — and even worse decision-making, Wentz has morphed from one of the NFL’s most promising young QBs to one of the worst QBs in the league, full stop.

But because of how his contract is structured, the Eagles essentially have no choice but to push forward with Wentz leading the way. Philly would face a massive dead-cap penalty if Wentz gets cut or traded in 2021, which might be why Pederson seems dead-set against expanding rookie backup Jalen Hurts’s playing time despite Wentz’s struggles. Instead, the team is stuck trying to figure out how to maximize Wentz’s talent while reducing some of the terrible mistakes that have plagued the majority of his 2020 season, particularly in recent weeks.

As we mentioned earlier, the Eagles still have a 23 percent chance to make the playoffs — which is simultaneously disappointing (given the epic weakness of the NFC East) and much higher than a 3-7-1 team has any right to expect. Their remaining schedule isn’t exactly easy, though it’s roughly comparable to those of Washington and the New York Giants. (The Cowboys actually have by far the easiest remaining schedule of any NFC East team, according to their opponents’ average opposing Elo rating, though they are probably also the worst NFC East team.) Despite Wentz’s struggles, Philadelphia can still salvage its season. But his historic regression has helped turn what could have been a cakewalk into a tough battle down the stretch.

Looking ahead: Week 13 doesn’t offer much in the way of true blockbuster contests, but the game that best mixes good, evenly matched teams is probably Bills-49ers — the later of two Monday Night Football games next week. San Francisco had been struggling mightily since regular starter Jimmy Garoppolo was lost in Week 8, but the Niners pulled out a surprising road win against the Rams on Sunday to salvage some chance at the playoffs. Ranking 13th in both schedule-adjusted EPA and Pro-Football-Reference.com’s Simple Rating System, San Francisco is better than its 5-6 record (even if backup QB Nick Mullens has proven himself to be nothing if not mediocre). And if nothing else, it should be interesting to watch the Niners play “host” in their improvised setup at Arizona’s State Farm Stadium.2 On the other side, Buffalo is coming off a Week 12 outing typical of its 2020 season: inconsistent, but good enough to win. The 49ers should pose more of a challenge than the Chargers did, however; the big matchup is Buffalo QB Josh Allen against San Francisco’s defense, which ranks 11th in EPA. A win for the Bills would all but clinch a playoff spot, while the Niners could bring their postseason hopes up to 41 percent (despite their stacked division) with the victory. Elo gives Buffalo a slim edge here, 54 percent to 46 percent. Elo’s spread: Buffalo -1