An annual rite of recent autumns has been to wonder whether Green Bay Packers quarterback Aaron Rodgers truly belongs among the game’s elite signal-callers anymore. The reason: Rodgers’s stats, routinely off-the-charts when he was younger, have been more average of late — and so have the Packers’ offenses. As Danny Heifetz of The Ringer wrote in August, the perception of Rodgers sitting on top of the QB world looked like it needed some refreshing.

But Rodgers is sneaky. When you write him off as being past his prime, he might just respond with a game like Sunday’s vintage performance — 364 yards, 73 percent of passes completed, four touchdowns and zero interceptions — against the Minnesota Vikings.

According to our quarterback Elo ratings,1 Rodgers on Sunday had the best QB game (relative to league average) of Week 1, the sixth-best game of his career and his second-best game since 2010. So much for the narrative about his best days passing him by — for now, at least.

Much was made over the offseason about the Packers’ lack of upgrade at receiver, and Rodgers’s top targets against Minnesota were little changed from last year’s list, aside from the absences of tight end Jimmy Graham (who was released in March) and receiver Geronimo Allison (who signed with the Detroit Lions).2 Nor did his receivers suddenly start getting open at a higher rate: According to the NFL’s Next Gen Stats, Rodgers’s targets had an average separation of 3.11 yards from their nearest defender per attempt at the arrival of the pass, down from 3.68 yards last year.3 In 2019, 50.7 percent of Rodgers’s throws were to receivers with at least 3 yards of separation from the nearest defender; on Sunday, that share was just 45.5 percent.

But Rodgers did more with what he had to work with on Sunday. Based on Next Gen Stats’ completion probability metric, which looks at factors including receiver separation, pass air distance and QB pressure to calculate the rate at which an average signal-caller would complete a given pass, we would expect Rodgers to have completed just 58.6 percent of his passes Sunday — third-lowest among qualified QBs. Instead, he completed 72.7 percent of them, a rate 14.2 percentage points higher than expected. On his five throws into what NGS considers “tight coverage” (with a separation under a yard at the pass’s arrival), Rodgers completed four of them for 103 yards and two touchdowns, including this 45-yard TD strike to Marquez Valdes-Scantling:

Aaron Rodgers is on a mission. 45-yard TD to Marquez Valdes-Scantling with time running out in the first-half. That's two TD passes in a span of 24 seconds for Rodgers. pic.twitter.com/vrE7ajMXWq

Completing passes he had no business completing used to be a Rodgers hallmark. We don’t have expected completion percentage for seasons earlier than 2016, but that was probably Rodgers’s most recent truly great season — he led the NFL in touchdown passes, completed more than 65 percent of his throws and directed the league’s fourth-best passing offense according to expected points added (EPA). That year, Rodgers had a completion percentage 3.4 points higher than we’d expect from an average QB. Ever since, though, he had completed fewer passes than we’d expect based on the characteristics of the throws he attempted — until now. The 14.2-point gap between actual and expected completion percentage against Minnesota was Rodgers’s best differential in any game since Dec. 11, 2016: 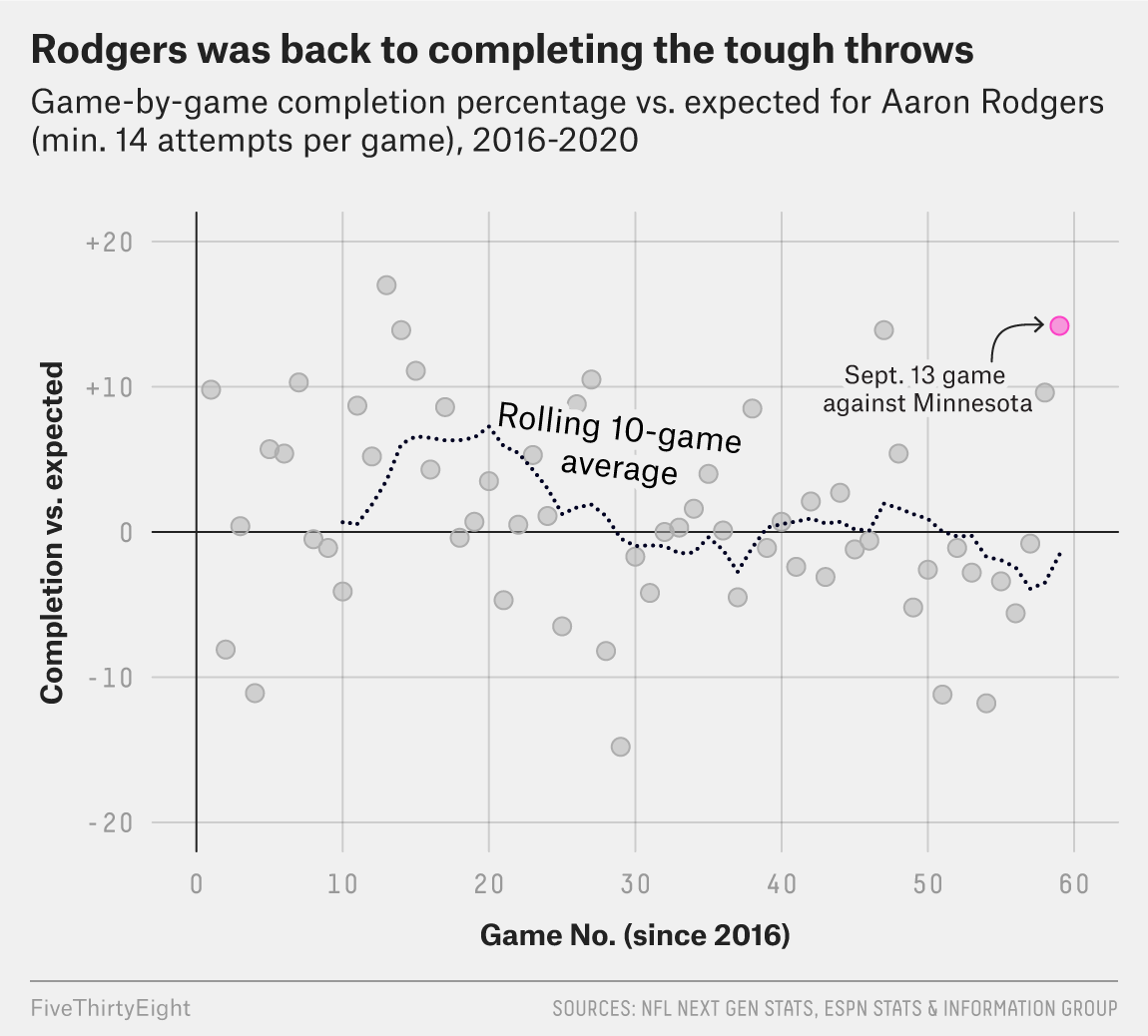 Rodgers did other Rodgers-like things on Sunday that recalled an earlier era of the quarterback’s career. He had two TD passes and a 97.9 Total Quarterback Rating (QBR) on his four throws from outside the pocket, an area where he once ranked among the game’s best: He was seventh in QBR on those passes from 2010 through 2016, but he had fallen off in recent years, dropping to 22nd in QBR from 2017 through 2019. Rodgers had a much better QBR under pressure (40.7) this week than he’d had over the previous three seasons (13.9). (He also faced less of it than usual, spending only 16 percent of his dropbacks under duress after being pressured 26 percent of the time last season.) He went deep more often and made fewer off-target throws. It was vintage Rodgers, in just about every sense.

Whether this was just a one-off or part of a larger resurgence for Rodgers remains to be seen. He has a healthy Davante Adams back after the wideout missed four games last season — and clearly Rodgers will be targeting Adams early and often. But although talented quarterbacks can still show flashes of greatness even after their primes end, the bigger challenge is doing it consistently. For what it’s worth, this single game raised Rodgers’s ranking in our QB Elo ratings from 12th in the league before the season to seventh after Week 1. We’ll have to see if he can rise even higher as the season goes on, or if he simply regresses back to his reduced form of the previous few seasons.

Looking ahead: On paper, the best game of Week 2 sees Russell Wilson and the Seattle Seahawks host the Cam Newton-led New England Patriots on Sunday night. Seattle is a home favorite in our Elo model, which makes sense given its impressive 38-25 shellacking of the Falcons in Atlanta last week. But all eyes will be on Newton after his incredibly efficient debut as the Pats’ starter. According to EPA, Seattle had a better defense last year than Miami, though the Seahawks’ D was soft (23rd) against the run — and allowed the fourth-most rushing yards to QBs of any team — which could give Cam plenty of chances to run. Elo’s spread: Seattle -2½