Based on a conversation from satyreyes comes a puzzle for which you might seek some medical attention:

Every day on a certain ward at Riddler Hospital, one patient is admitted who needs one day of treatment, one who needs two days and so on, up to seven days. Each patient remains in their own room for the duration of their stay.

You are a nurse who is assigned to a room at random on a particular day. What is the probability that the patient you see in that room will still be there tomorrow?

If the grasshopper is within 20 centimeters of one of the edges, it will not jump off the edge. For example, if it is 10 centimeters from the left edge of the beam, then it will randomly jump to anywhere within 30 centimeters of that edge with equal probability (meaning it will be twice as likely to jump right as it is to jump left). 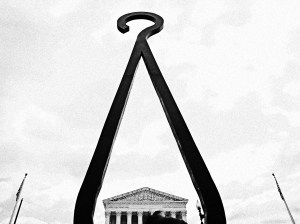 After many, many failed attempts to catch the grasshopper, where is it most likely to be on the beam? Where is it least likely? And what is the ratio between these respective probabilities?

Last week, you saw how you could add or multiply the counting numbers 1, 2 and 3 — using each number at most once, and in any order — to make all the numbers from 1 to 9:

However, there was no way to make the number 10. Therefore, 10 was the First Unmakeable Number, or “FUN,” for the first three counting numbers.

What was the FUN for the first four counting numbers?

As we already said, numbers 1 through 9 could already be generated just using 1, 2 and 3. Starting at 10, you could continue generating numbers all the way up to 21. Many solvers, like Mary Lo, were kind enough to show how they generated each number. Here was how Mary generated the different numbers:

For extra credit, you were asked to find as many “FUNs” as you could.

As I had expected, a number of solvers wrote computer code to do this for them. A straightforward algorithm was an exhaustive one — trying every possible arrangement of numbers, operations and orders — and then identifying the smallest number that couldn’t be generated.

A few readers also extended the puzzle in other ways, such as including additional operations like subtraction and division. I wanted to highlight one such extension, courtesy of Nahiphog over Twitter: Using the operations of addition, subtraction, multiplication and division, which four counting numbers could you have used to produce the greatest possible FUN? According to Nahiphog, using the numbers 2, 3, 14 and 60, you could have generated every number up to and including 86, meaning the FUN was 87:

Now if that’s not FUN, I don’t know what is.

Last week, you were stranded in the Great Riddlerian Desert, where there was a single oasis that was straight and narrow. There were N travelers who were trapped at the oasis, and one day, they agreed that they would all leave. They independently picked a random location in the oasis from which to start and a random direction in which to travel. Once their supplies were packed, they all headed out.

What was the probability that none of their paths would have intersected, in terms of N? (For the purposes of this puzzle, you were asked to assume that the oasis was a line segment, while the desert was an infinite Cartesian plane.)

If three northern travelers went in three random northerly directions, of the 3! (or six) ways to order them from left to right, only one would have resulted in a west-to-east clockwise rotation, and therefore no intersections. So the probability of this occurring was 1/6.

Many solvers left their answers in this form. However, there were ways to simplify it, or at least write it without using a summation. Multiplying the numerator and denominator inside the summation by a factor of N! and then pulling out a factor of 1/2N·(1/N!) left you with (N choose k)2 inside the summation. The resulting summation happens to be equivalent to 2N choose N, or (2N)!/(N!)2. After all that work, the summation was gone, and the probability of no intersections was (2N)!/(2N·(N!)3).

As N increased, this probability got really small really fast. Solver Laurent Lessard applied Stirling’s approximation to show that, for large N, the probability of no intersections was proportional to (2e/N)N+1, a result that agreed nicely with an approximation argument form solver Josh Silverman.

Whether their paths crossed or not, I have it on good authority that all N travelers made it safely out of the Great Riddlerian Desert.