The Miami Hurricanes are flirting with college football’s most sacred, exhausted status: back from the brink.

With entire power conferences yet to take the field, no team has capitalized on an up-for-grabs national spotlight more than Miami. In his second season at the helm, head coach Manny Diaz has his team 2-0 and firmly ranked in the top 15 in the AP and Coaches polls. The Canes opened the season with a 17-point win over Conference USA-favorite UAB and a 13-point win over Louisville in College GameDay’s game of the week. The GameDay crew will be in attendance again this weekend for the team’s matchup with Florida State. With No. 1 Clemson on tap two weeks after that, a win Saturday might secure a third showing.

Less than nine months ago, Diaz was putting the final touches on the program’s fourth losing season of the past 40 years with a bowl performance so dispiriting that the university’s athletic director had to issue a vote-of-confidence statement shortly after. On Saturday, Diaz led his team to its first road victory over a top-20 opponent in more than a decade.

So how did Diaz resuscitate the Canes?

He started by firing offensive coordinator Dan Enos the day after Miami was shut out by Louisiana Tech in the Independence Bowl and replaced him with Rhett Lashlee. Lashlee is a member of the Gus Malzahn coaching tree and most recently worked alongside Sonny Dykes, a follower of the “air raid” offense, to vault SMU to its first 10-win season since 1984. “Maybe we can turn things around quicker than people think,” Lashlee said this offseason. He’s off to a promising start.

Preaching the up-tempo, power-spread gospel and a more manageable playbook than his predecessor, Lashlee has injected life into a Miami offense that ranked outside of the top 80 in expected points added per play in each of the past two seasons, according to ESPN Stats & Information Group. With Lashlee calling the shots, the offense ranks 16th.

For a program synonymous with speed, when it comes to snapping the ball, previous seasons look downright lazy compared with 2020. 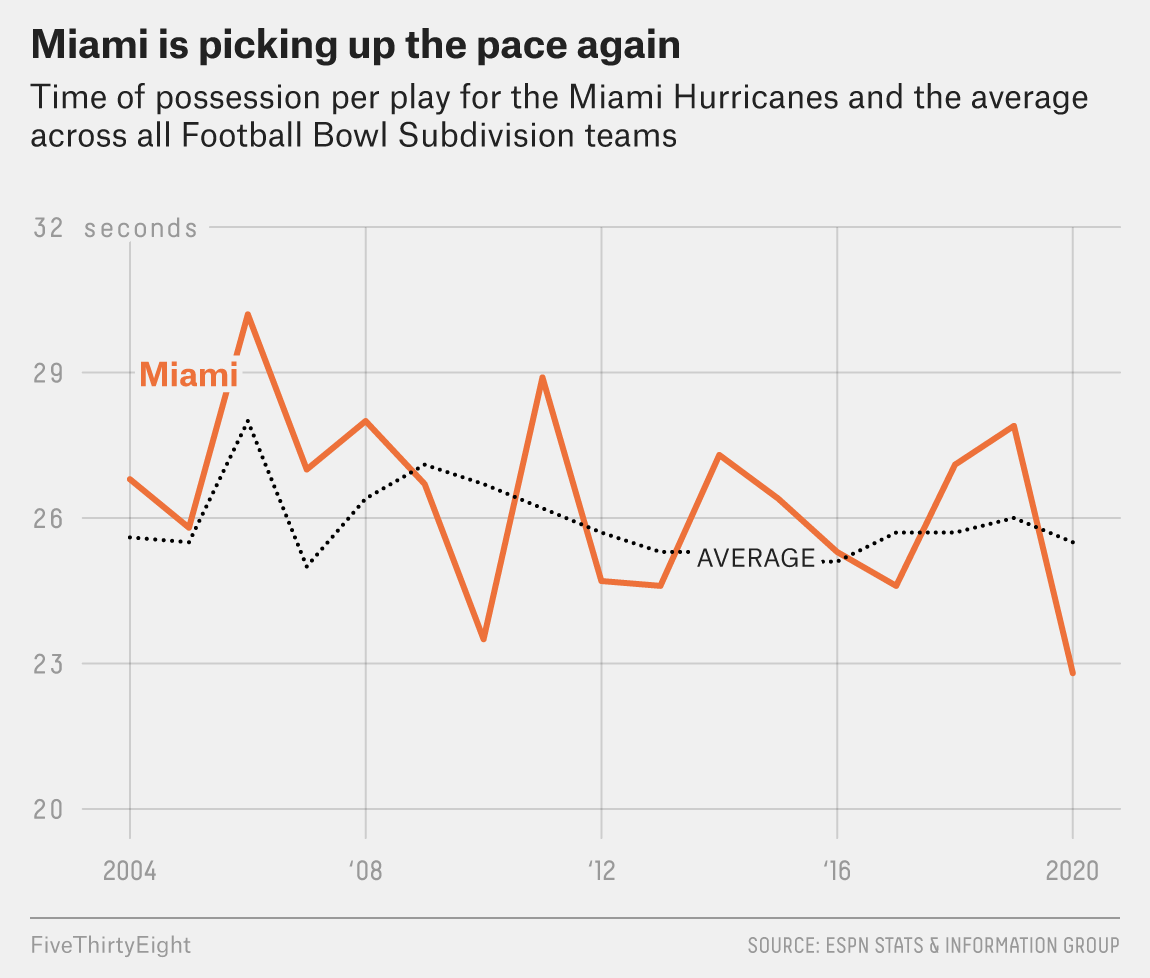 Outside of personnel, the most obvious transformation is in tempo, where the Hurricanes have swapped out Fred Flinstones’s car for a Bugatti. Last season, Miami huddled before 93.5 percent of offensive snaps, one of the highest rates nationally. This season, that clip has fallen to 27.3 percent, one of the lowest in the nation and in line with the rate at which SMU operated under Lashlee.

The air raid doesn’t get its name from plays that generate three-yards-and-a-cloud-of-dust, but Lashlee recognizes the value of a balanced offense. And in two games, he has demonstrated a malleable game plan, designed to target the soft spots of the opponent. For example, in Miami’s season opener against UAB, the Canes faced a defense that featured four returning all-conference defensive backs and a secondary coming off consecutive seasons ranked in the top 25 in expected points added on pass defense. So Lashlee spent 66 percent of his offensive snaps on carries, and the Hurricanes accumulated the program’s fifth-most single-game rushing yards since at least 2000.

Week 2 brought a less formidable secondary to scheme against, so Lashlee dropped the rush rate to 50 percent, and the Canes finished with 325 passing yards and three touchdowns through the air..

It also helps to have D’Eriq King — by far the most dangerous QB Lashlee has worked with — running the show.1 In King, Lashlee has a Heisman contender who transferred from Houston after he piled up 81 touchdowns, ran for nearly 1,500 yards and threw for nearly 5,000 despite having four different offensive coordinators.2

King is proficient at rolling outside the pocket to buy time for receivers or scrambling for chunk yardage when the play breaks down. He has already run for 97 yards after first contact, which leads all FBS quarterbacks. Only three Miami QBs since 2011 have produced more over an entire season.

His decision-making has been Dean’s List-worthy so far. Among QBs who have started two games, Pro Football Focus noted that the only two who haven’t produced a turnover-worthy play are King and presumptive future No. 1 overall draft pick Trevor Lawrence. With King flying around the field, Miami’s team quarterback rating (QBR) both inside and outside the pocket is the highest it’s been in the team’s first two games of any season since at least 2011.

To optimize King’s talents in mobility and split-second decision-making, Lashlee is serving up huge portions of zone-read, a play he’s called 45 times already, tied for the second most of any team in the country. Last season, Miami called it 11 times all season. It’s been good for 8.44 yards per play, the third-highest mark nationally

King has a number of threats in the passing game, including Brevin Jordan, one of the nation’s best tight ends, who leads his position nationally in receiving yards (171) and forced missed tackles (three), and is tied for the lead in receiving touchdowns (two).

It can’t be overstated that in King, Miami has a wrinkle it hasn’t had in years: an elite, dynamic QB.

There was a time when Miami was referred to as “Quarterback U.” Those days died a long time ago, as the most important position in the sport has consistently failed the program for nearly two decades. Miami has produced 119 NFL draft picks since 2000; two of them were QBs, and only one (Ken Dorsey) saw game action. It’s astonishing that a team with such a strong recruiting tradition has been unable to find a serviceable option under center for so long.

But things have changed with King, who has helped the Hurricanes to their highest total efficiency (86.4) through two games since at least 2005. As a team, Miami ranks 12th in the country in Total QBR (79.7) and seventh in expected points added on passes. They ranked 106th and 88th in the metrics last season and since at least 2004 have never finished a season ranked in the top 25 in Total QBR.

And as evidenced last weekend, King has unquestionably unlocked a big-play offense. Miami opened the second half with two 75-yard touchdowns and already has more plays of 60-plus yards from scrimmage (two) than it did all of last season (zero). “The explosive plays, it was who we wanted to be,” Diaz said after the game.

It’s helping Miami dominate the opposition. Through its first two games last season, the team logged 15 offensive snaps with the lead. This season, the team has 108, more than it’s had through two games in any season since at least 2004.

What’s scary for ACC defensive coordinators is that the Hurricanes offense is likely to get more effective. For one, the team missed most of spring ball because of the pandemic and was working in a new QB to boot. For another, the level of receiving polish is lacking: Miami receivers have dropped six passes, representing the team’s highest drop rate through two games since at least 2011.

This spot is a familiar place for The U, which opened the 2013 and 2017 seasons with encouraging starts only to flounder down the stretch. But it looks like the ACC isn’t going to be a one-horse conference in 2020, and Miami fans are desperate for a return to the program’s old form. From 1983 to 1992, The U went 107-14 and won four national championships. The 2001 outfit, which ran the table behind six All-Americans, has a claim to make as the greatest team ever.

The players on Manny Diaz’s roster3 were too young to experience the program’s heyday. But they do have a say in its resurrection.