In his second season as head football coach at Southern Methodist University, Sonny Dykes — a noted appreciator of winning and potential coach of the year — has put the Mustangs back on the college football map. SMU is 6-0 for the first time since 1982 and recently made their first appearance in The Associated Press Top 25 since the Reagan administration.1

The NCAA all but killed the program in 1987, imposing the so-called “death penalty” that banned SMU from play for an entire season.2 The cellar may be a temporary place, but SMU built a home in it over the past quarter-century. Fans would be forgiven for believing it was permanent. But this year’s squad had no intention of staying put.

Hardly anybody outside of the SMU locker room expected such overwhelming success. Oddsmakers thought of this as a six-win outfit in the preseason, and the Mustangs have matched that projected total with at least half the season to go. Coaches in the American Athletic Conference saw a team likely to finish fourth in the West Division, so SMU went out and nabbed the top spot in the conference standings. They weren’t favored in the season opener against Arkansas State, so they went to Jonesboro and put up more than 500 yards of total offense in a win. Three weeks later, they were 7.5-point underdogs against a ranked TCU squad, so they went to Fort Worth and downed the Horned Frogs. ESPN’s Football Power Index still isn’t buying the Mustangs, giving them a 14.2 percent likelihood of winning a conference title and a 2.8 percent likelihood of winning out. If they follow the trend they’ve set so far, SMU will do both. 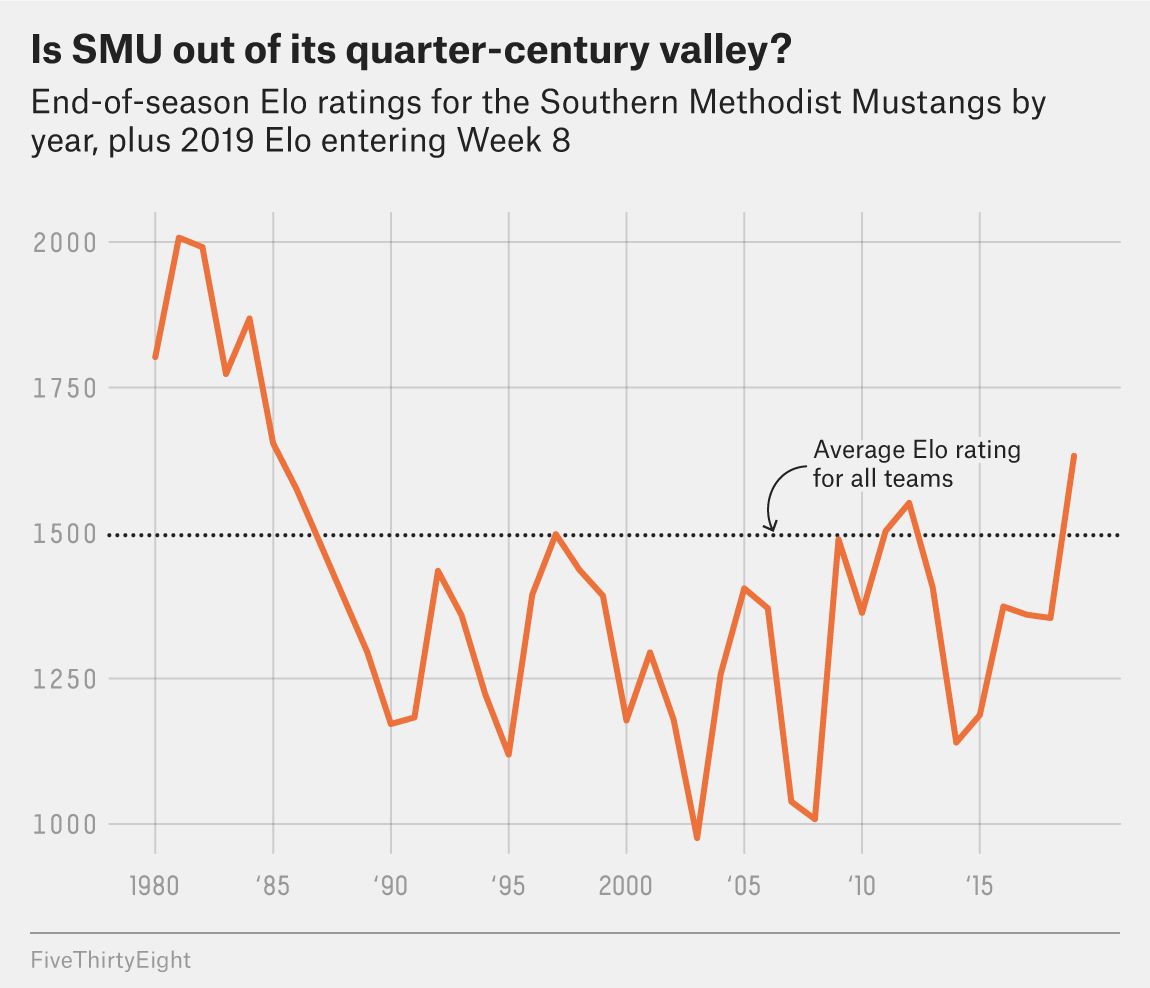 Which isn’t to say that SMU’s season has been successful in the conventional sense. The Mustangs are the only team to allow a touchdown when returning a kickoff. They’re the only team to win after entering the fourth quarter trailing by 21 points. They might be the only team to have had an offensive lineman’s helmet chucked 15 yards without drawing a penalty. For entertainment value, fans of the absurd can’t do much better than SMU, which seems to invent new reasons to tune in each week.

Alumni — and admirers of SMU football from the 1980s — must be tickled to see that the spark in Dallas has come on offense. The Mustangs score 42.2 offensive points per contest, the seventh-most in the nation. Only vaunted, traditional powers in Oklahoma, Ohio State, Alabama and LSU have scored more offensive touchdowns.

The Pony Express isn’t back, but not for a lack of effort by the SMU Mustangs. Nearly 40 years after Eric Dickerson and Craig James formed one of the greatest backfield tandems of all time, the Mustangs have reestablished their mojo in the same vein. Only eight teams are running the ball more than SMU, and only Wisconsin has more rushing touchdowns. Much of SMU’s ground game has been courtesy of Xavier Jones, who just wanted to cap his college career “with a bang.” He ranks 11th nationally in rushing yardage (646) and is tied for third in rushing touchdowns (12).

What’s more, Dykes is largely operating with a new roster. Starting quarterback Shane Buechele, leading receiver Reggie Roberson Jr. and leading tackler Patrick Nelson are all transfers. As The Athletic’s Chris Vannini noted, the program brought in 16 transfers this offseason, at least four more than any other team. In total, the team has 65 new players on campus this year.

Sometimes comparisons are best avoided. SMU has tied its best start to a season in school history, but it ultimately may not hold a candle to the halcyon days in which the Mustangs were “the best team money could buy.” An upstart season — one that could prove to be transformational — still hasn’t managed to mend the broken relationships between former players and the university. But even in the football-crazed state of Texas, who would have thought that SMU would return to relevance? If June Jones was the first to resurrect the program, Dykes is the first to show it can flourish in the modern era. SMU had gone over 30 years with just a handful of winning seasons after it faced crippling sanctions, but this year, a new chapter is being written in familiar ink.

CORRECTION (Oct. 18, 2019, 5 p.m.): A previous version of this article incorrectly described the ban applied to SMU’s football team in 1987. The school was banned from all play for the season, not just the postseason.