By capturing his second major of the 2015 season, U.S. Open winner Jordan Spieth has placed himself in some very elite company. It’s only the fourth time since 19581 that the same player has won both of the year’s first two majors, and just the 13th time any player won back-to-back major titles. 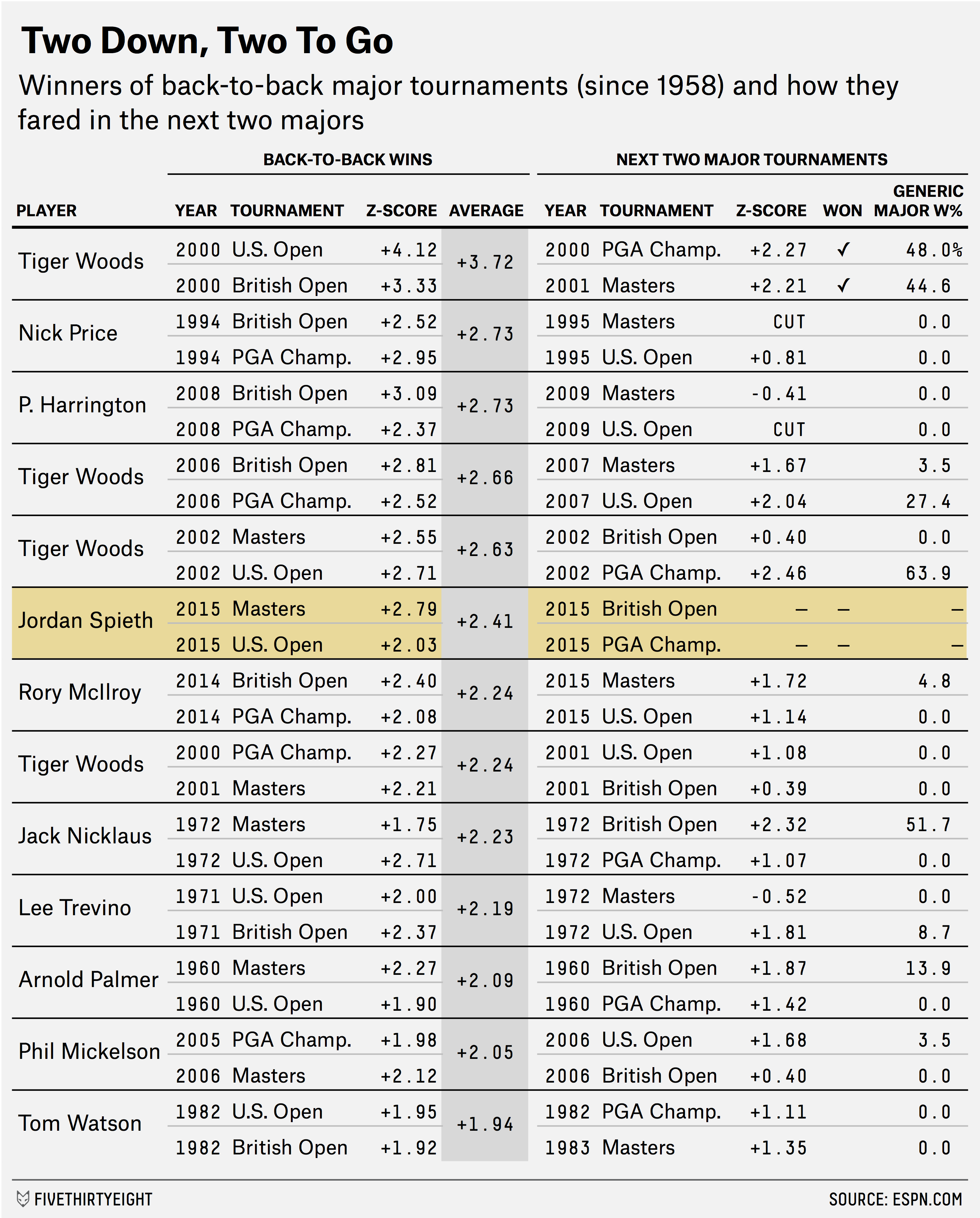 The conversation has quickly turned to Spieth’s Grand Slam chances. This has been the Year of Spieth on the PGA Tour, and a Slam would solidify his season as one of the best in golf history. And yet he’s not considered to be the best golfer on tour. Spieth is still the second-ranked player in the world behind Rory McIlroy, who is probably the better golfer on a per-round basis and has, in the past, won the two major tournaments remaining on the 2015 schedule.

That’s why the betting markets consider McIlroy, and not Spieth, the favorite to win each of the season’s final two majors. After adjusting for the house edge built into betting odds, the sportsbook Bovada.lv assigns2 McIlroy a 13 percent probability of winning the British Open and an 11 percent chance of winning the PGA Championship; the site gives Spieth a 9 percent shot at winning each tournament.

Those numbers are similar to the ones you’d see if you looked at how past back-to-back major winners did in their next two major tournaments. Of those who won back-to-back majors, only Tiger Woods — who won his “Tiger Slam” by capturing the 2000 U.S. and British Opens and the PGA Championship, plus the 2001 Masters — went on to win any of the next two majors, giving the group an 8.3 percent success rate per major.

Of course, sometimes you can play well enough to win but run into another great performance. That’s when a method such as Bill Barnwell’s Z-scores is useful, because it tells us how well a player scored relative to the rest of the field on the same day. We can then use that number to track how often a player’s performance would be good enough to win a typical major against typical competition, which helps even out comparisons between fields of varying quality. And according to this calculation, the average back-to-back major champ’s Z-scores over his next two majors were good enough to win a generic major3 11.3 percent of the time.

No matter how you cut it, the odds of Spieth finishing off the Grand Slam are still fairly low — about 1 percent, if the probabilities above are any kind of guide.

Even if Spieth doesn’t win the Slam, however, his future looks exceptionally bright. Back in April, we developed a model (based on the historical performance, by age, of people who won majors) to track Woods’s progress in his pursuit of Jack Nicklaus’s all-time majors record. If we plug in Spieth’s expected major count at year’s end — roughly 2.2, using the odds from Bovada — he’s currently on pace to finish his career with just under 12 major titles, a total that would rank third all-time if it came to fruition. (And remember, that’s just a mean projection — the variance around it means there are plenty of scenarios in which he wins more than 12.)

Either way, it’s been an incredible start to Spieth’s career, Grand Slam or not.