When Tiger Woods teed off Thursday afternoon to begin this year’s Masters bid, it was the start of just his third appearance of the 2015 season and his first competitive round since a back injury forced him to withdraw on the first day of the Farmers Insurance Open in early February. As Woods shot a 1-over-par 73 in the first round, all eyes were on his form — even though he’s done little of note over the past two seasons to warrant the attention.

Famously, Woods has won 14 major golf championships over his stellar career, a tally that ranks second only to Jack Nicklaus’s 18 major titles. A win at the Masters would give Woods 15, but he hasn’t won a major since the 2008 U.S. Open. In the intervening years, his game and personal life have been thoroughly ravaged, with injuries taking a particular toll recently. What once seemed to be destiny — Woods’s overtaking of Nicklaus as the winningest major champion ever — now looks like a fool’s notion.

With Woods in action again at Augusta, where he’s won four green jackets, we tried to track how far his major championship-winning pace (and therefore his chances of catching Nicklaus) have fallen in recent years. The biggest strike against Woods? The fact that he is 39 years old — well past the prime of major winners since the PGA Championship switched to stroke play in 1958: 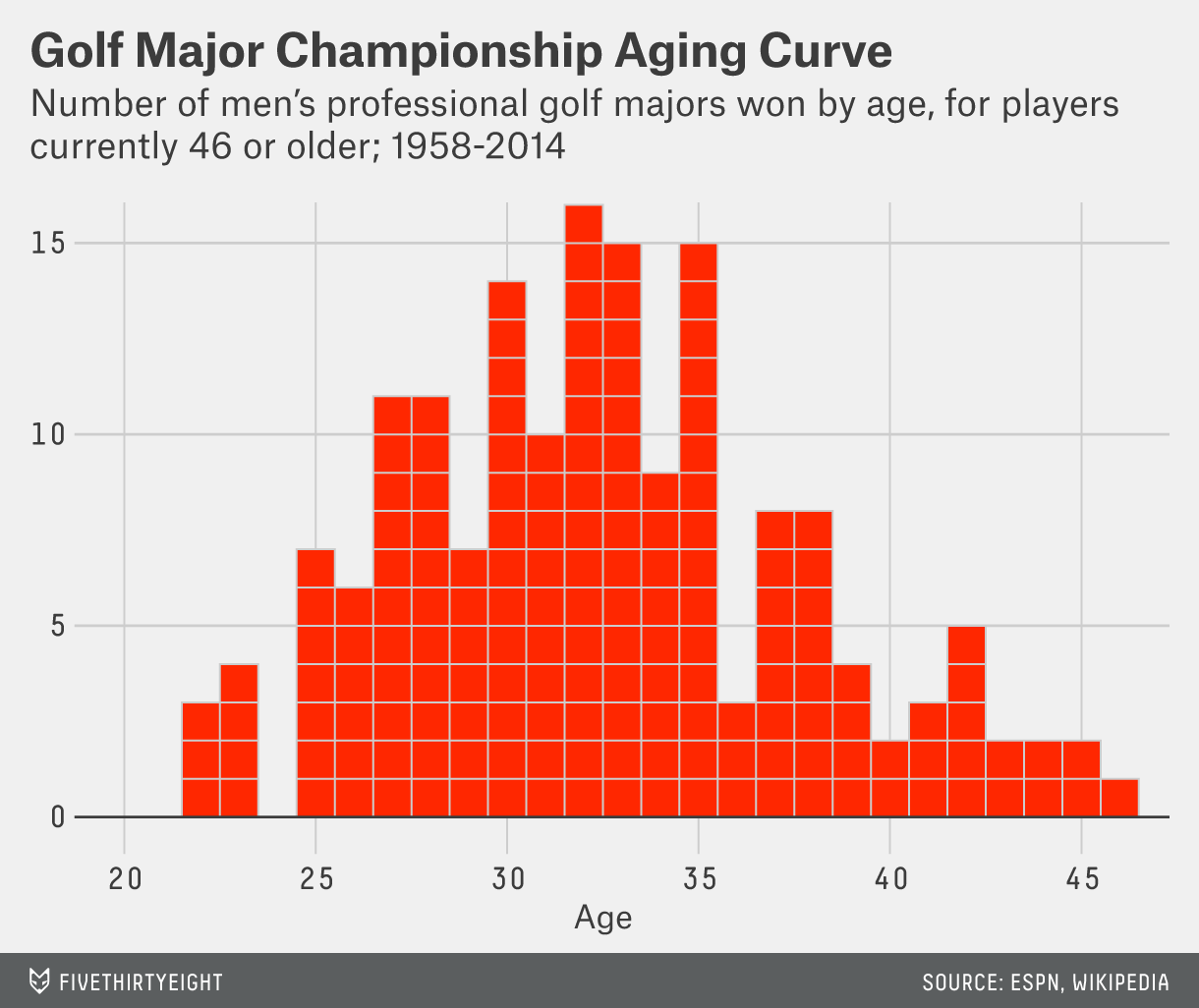 If you toss out all major winners currently younger than 461 to prevent the sample from being skewed toward younger, still-active champions such as 25-year-old Rory McIlroy (whose future major totals are as yet unknown), the average major-winner in golf is about 32.5 years old. And only 12.5 percent of all major titles since 19582 were won by players aged 39 or older. By any measure, the time for winning majors is quickly running out for Woods.

Of course, Woods’s track record is better than just about any other major-winner ever. Through age 32, when Woods last won a major, he led Nicklaus 14-11 in the trophy count. (Even now, after a drought of more than six seasons, Woods is only one major short of Nicklaus’s pace at the same age.) To estimate how many major wins remain in a player’s career, we ran a Lowess regression for players at each age who had won at least one major to that point in their career.3 And by that method, Woods’s mean expectation was to pass Nicklaus for most of his career after his banner 2000 season — even after being afflicted by injury (he missed the second half of the 2008 season with a torn ACL) and scandal (he was limited to 12 tournaments and zero wins in 2010 after his many infidelities came to light): 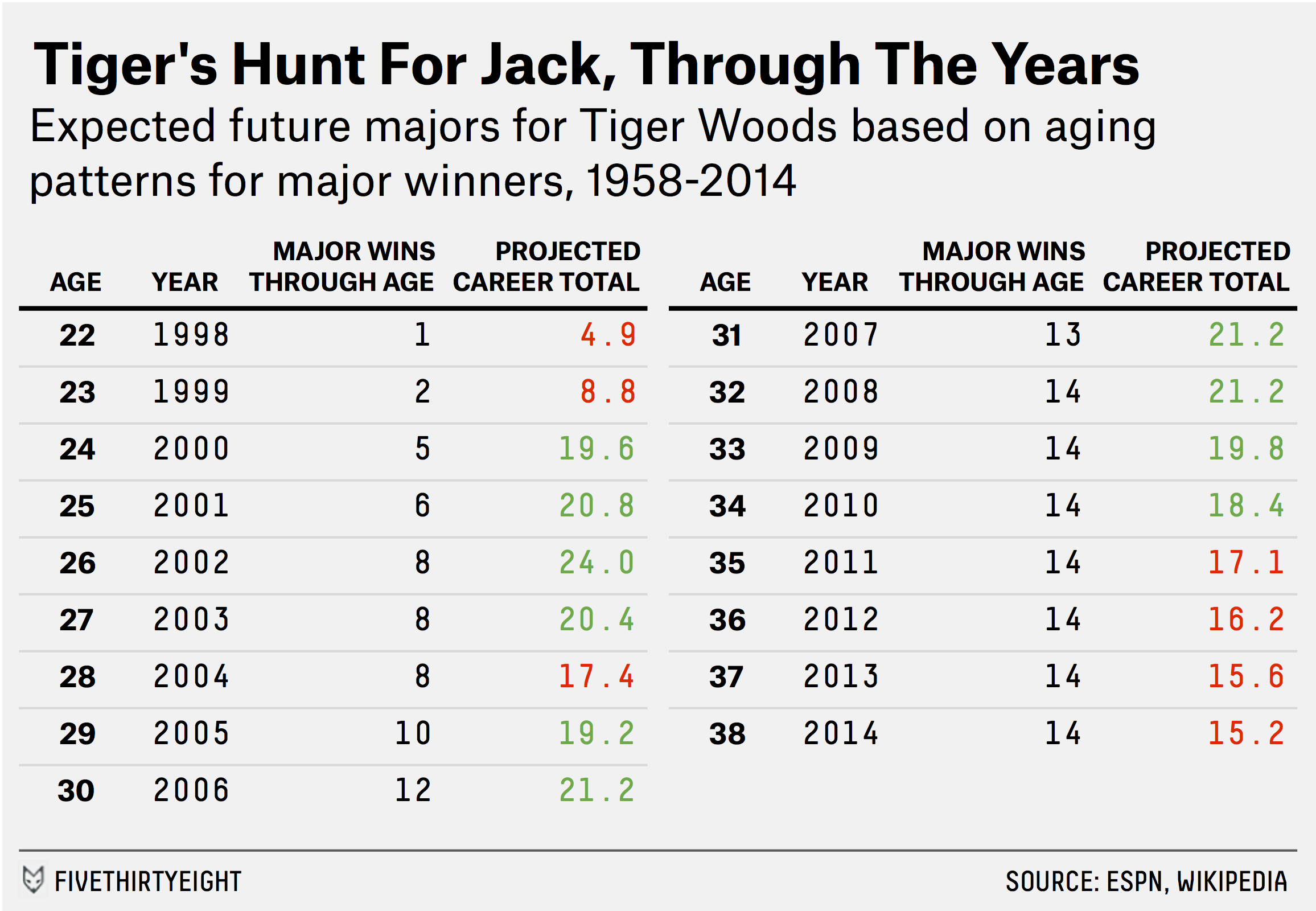 Since a major-less 2011, though, Woods’s projected career major tally dropped below the number necessary to pass Nicklaus. Our system now sets Woods’s expected remaining majors at a mere 1.2 — and that might be too high. The regression uses Woods’s entire track record to date, perhaps not realizing how much his form has slipped in recent seasons. It’s also worth noting that Nicklaus was an incredible outlier. He won more majors after the age of 37 (four) than all but 14 golfers have ever won in their entire careers. So at a certain point, it was probably unrealistic to have expected Woods to follow the same pace, even before witnessing how much his game — and health — have slipped in recent years.

Woods front-loaded so many major titles that he’d only need a comparatively modest per-tournament win rate over the remainder of his career to pass Nicklaus. But even given that head start, Woods’s abrupt decline goes to show that there are no sure things in sports.