Democrats’ chances of holding on to the North Dakota Senate seat — which is critical if they stand any chance of winning the upper chamber — look quite bleak according to a recent Fox News poll. Sen. Heidi Heitkamp has long faced a tough uphill battle to win re-election in a state that President Trump carried by 36 percentage points in 2016. As you can see from the seven polls we’ve collected on the race so far, Heitkamp has trailed Republican Rep. Kevin Cramer for months. And two recent polls suggest that Heitkamp lost even more ground in the last couple of weeks, falling 10 to 12 points behind her opponent (before poll adjustments); in early September, she was only 4 points behind.

FiveThirtyEight’s Classic forecast currently gives Heitkamp just a 1 in 3 chance of winning re-election. Those odds aren’t great, but Heitkamp surprised everyone in her first bid for the seat in 2012 — more on that in a moment.

There is some speculation that Heitkamp’s vote against Brett Kavanaugh’s Supreme Court nomination — a decision that was both politically and personally difficult for her — may have eroded the senator’s support among voters.1 But it’s difficult to say what impact, if any, her vote against Kavanaugh has had, as there hasn’t yet been any polling since the vote. That said, since the North Dakota contest is one of the most competitive Senate races this year, there will probably be at least a few more polls in the final weeks before the election.

Make no mistake, the polling so far is not great for Heitkamp, but this is a political candidate well acquainted with being an underdog. Heitkamp trailed her opponent in several polls in 2012, only to go on to win by less than 1 percentage point. It was one of the biggest election upsets that year. What’s more, her victory came even as Barack Obama lost the state to Mitt Romney by 20 points.

Although Heitkamp was able to pull off an improbable victory in 2012, there are already some signs that she might not be able to do the same this time around. Our polls database shows that eight polls conducted in October 2012 had her losing the race by as much as 10 points or winning it by as much as 6 points. But polls this year tell a different story. Only one poll has found her ahead, and it was conducted in February. The most recent poll suggests she’s trailing by as much as 12 points.

The political environment is more favorable for Democrats this year than it was in 2012, which could give Heitkamp a boost, but unfortunately for her, North Dakota has likely moved more to the right since she was elected, making it tougher for Democrats to compete there. To give you a sense of just how hard it is for Democrats to win in the state right now, consider North Dakota’s 2016 Senate race, where Democrat Eliot Glassheim lost to incumbent Republican John Hoeven by a whopping 62 points. And in this year’s congressional race,2 the Democratic candidate has less than a 1 in 100 chance of winning.

It could also be that Rep. Cramer is a stronger candidate than Heitkamp’s 2012 opponent was. That year, Rep. Rick Berg was a one-term congressman and one of the wealthiest members of Congress, who drew criticism for his ties to a controversial property-management company. But Cramer, a three-term Congressman, seems to be just as well liked as Heitkamp. What’s more, President Trump has a 64 percent approval rating in the state and has endorsed Cramer and even held a rally for him earlier this summer.

In 2012, Heitkamp’s strategy was to focus on local issues, like farming and energy, and avoid partisan politics. But that same strategy might not work as well this time around as she faces an increasingly nationalized landscape where more voters opt for the same party in every race. Furthermore, Heitkamp did not have a voting record to criticize in her first run. Now she does. Heitkamp has voted in line with Trump just 54 percent of the time, far less than we’d expect based on Trump’s margin of victory in her state. She voted against the Republican attempt to repeal the Affordable Care Act and against the GOP’s tax plan, opening her up to attacks from conservatives. But voting alongside Republicans may not have helped her re-election bid either. Her vote for the Keystone XL pipeline for example, could hurt her with Native American voters, who helped put her in office in 2012. And even if most Native American voters still support her, new voter ID requirements in the state are expected to depress turnout among tribe members in this election.

In the end, voting against Kavanaugh may be the least of Heitkamp’s worries. Heitkamp has less than a month to improve her poll numbers (or outperform them), and if she doesn’t, Democrats’ longshot odds of taking back the Senate become much longer. 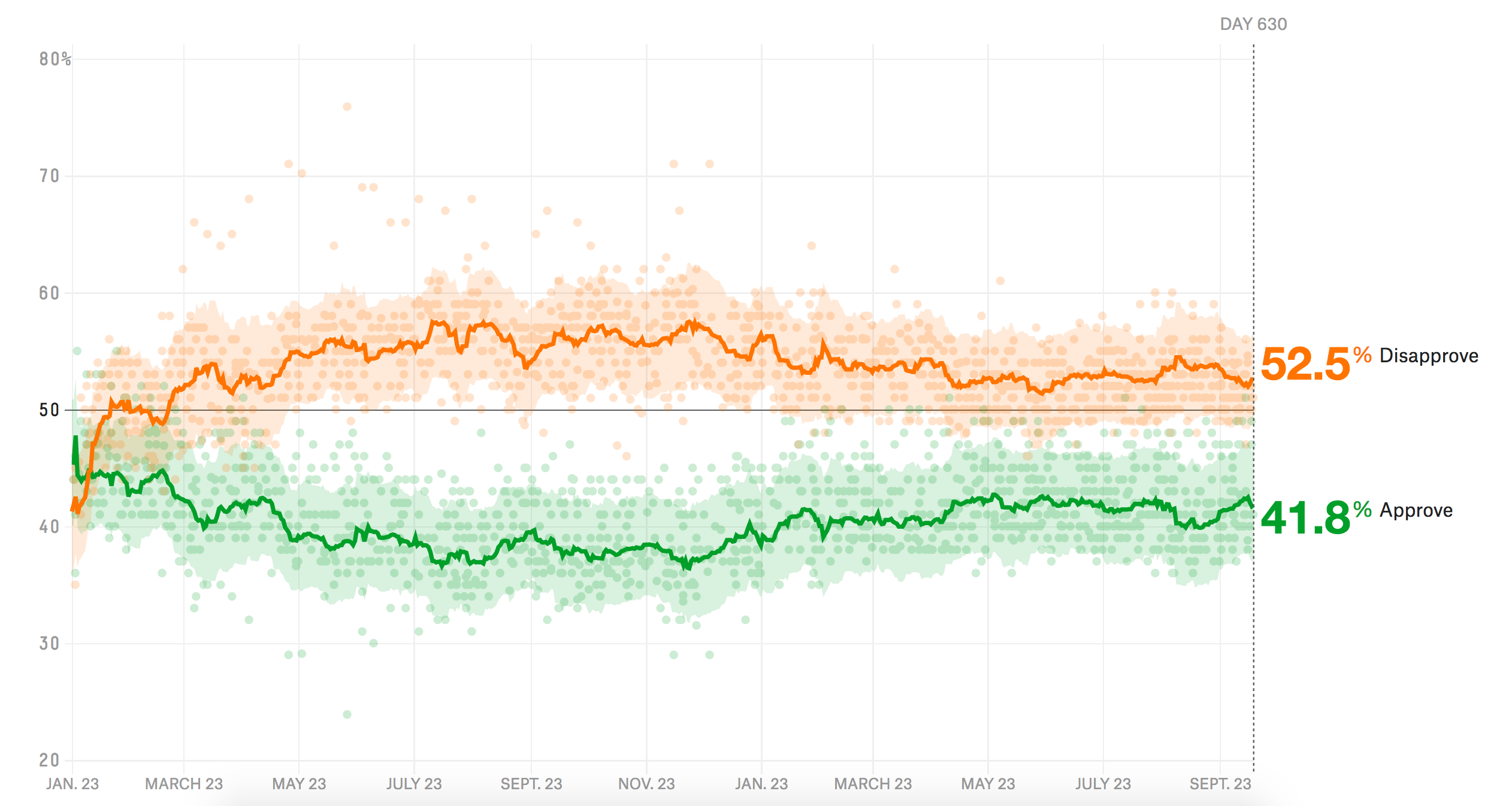 The president’s net approval rating currently sits at -10.7 points , according to our tracker. That’s about the same as it was one week ago. But Trump is doing better with voters than he was one month ago, when he had a -13.5 net approval rating (40.0 percent approved and 53.5 percent disapproved). 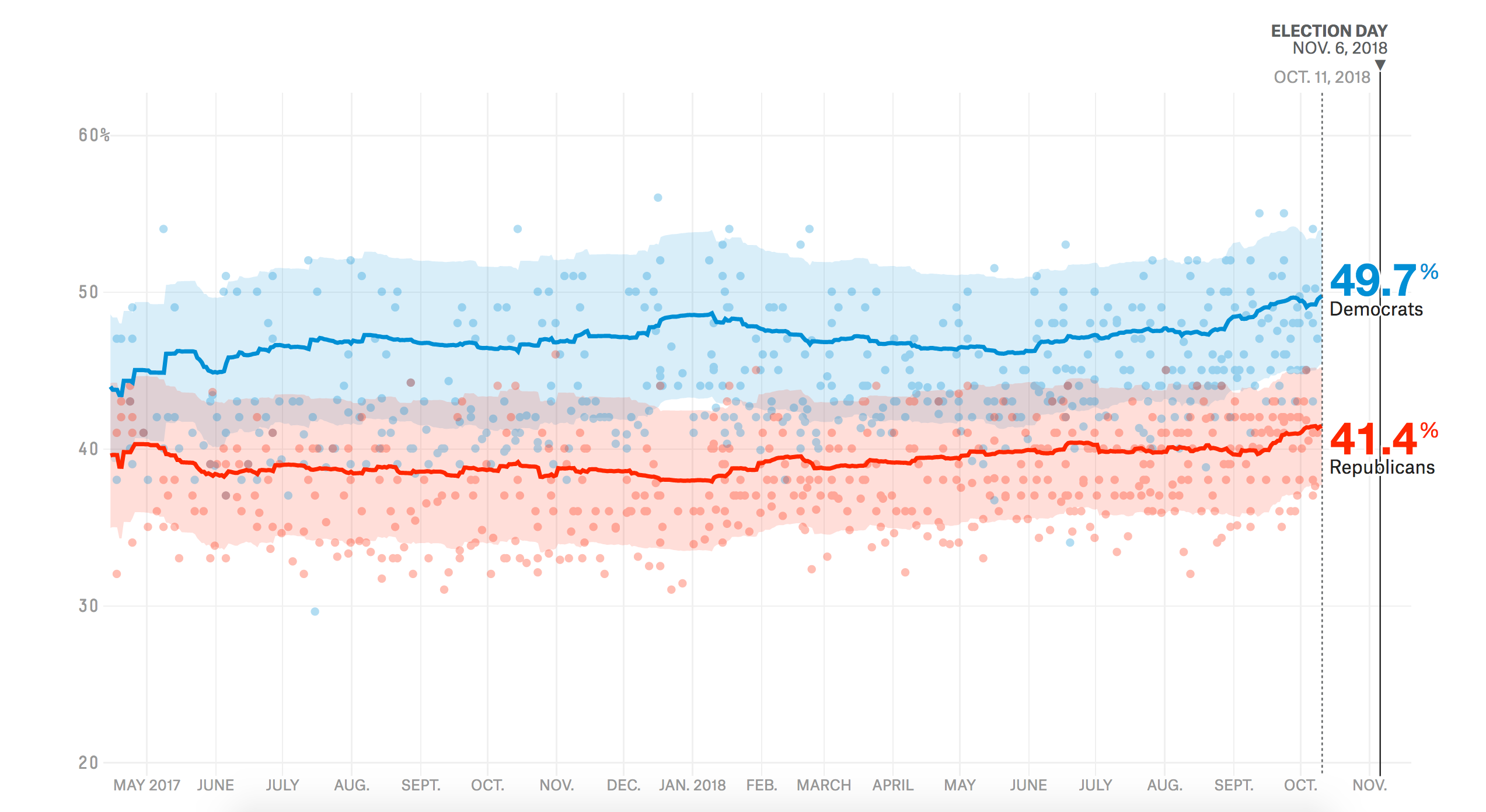 Democrats haven’t improved their position by much over the last week. According to our generic congressional ballot polls, Democrats lead Republicans by an 8.3-point margin (49.7 percent to 41.4 percent). Last week, Democrats had a 7.7-point advantage over Republicans. One month ago, they were doing slightly better with an 8.6-point margin against Republicans.