As the Senate prepares for a confirmation vote on Supreme Court nominee Brett Kavanaugh, let’s take a step back and look at how this whole saga has affected his standing, as well as what voters think of the nominee.

Last week, Christine Blasey Ford, who says Kavanaugh sexually assaulted her while they were in high school, and Kavanaugh, who denies the charge, each testified before the Senate Judiciary Committee. Since then, the evidence suggests that Kavanaugh’s standing didn’t really change from where he was before the hearing. Looking at three pollsters1 who conducted surveys in the seven days before and after the hearing, we found that net support for Kavanaugh’s nomination declined by an average of 1 point.

That’s not much of a drop, but if we zoom out, we can see that most of the deterioration in the public’s support for the Kavanaugh nomination happened after Ford’s name became public in a Sept. 16 Washington Post article but before the Sept. 27 hearing. 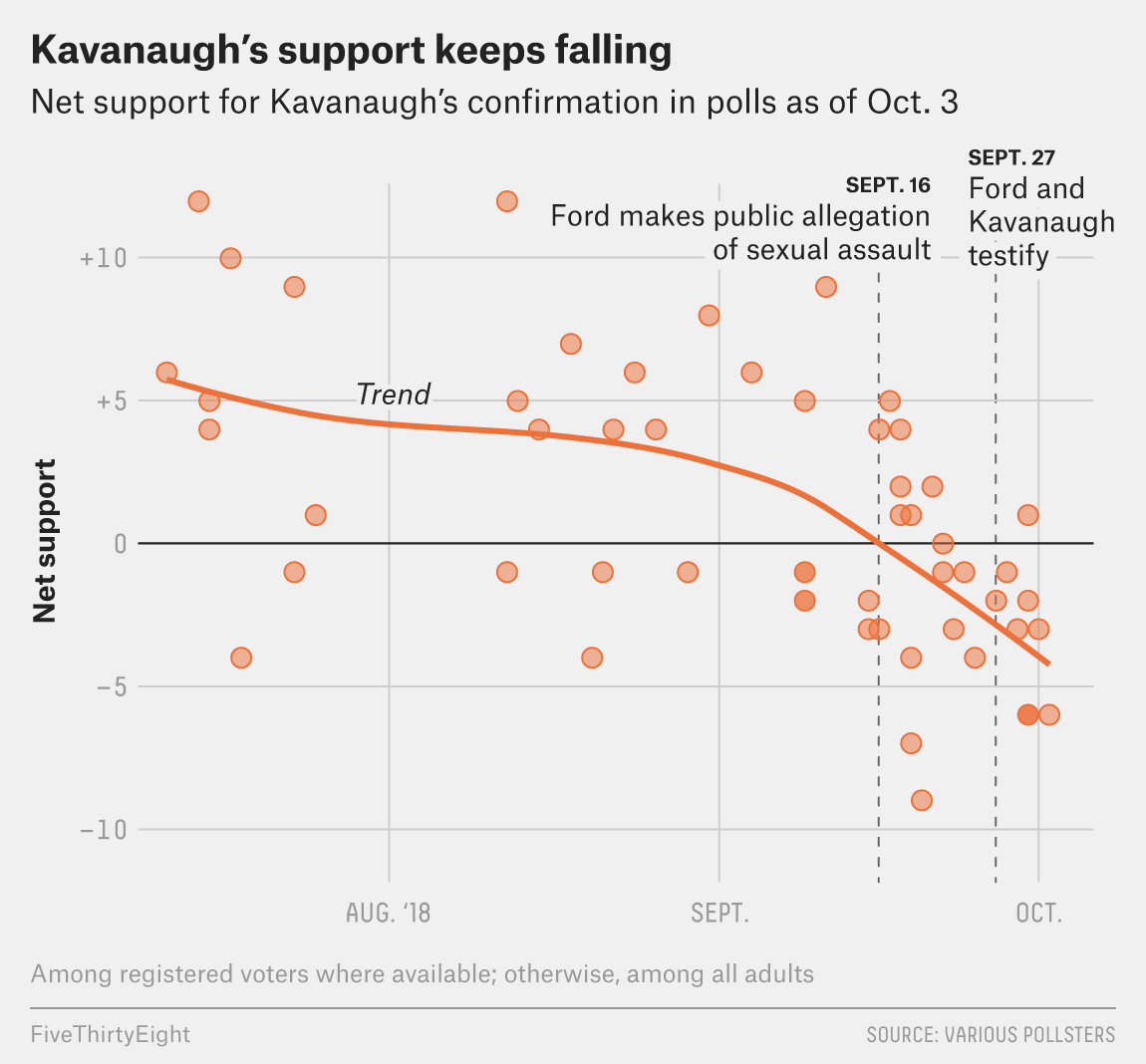 One thing that is obvious from polls we’ve looked at is that Americans have become increasingly divided along party lines when it comes to the Kavanaugh nomination. Generally, Republicans are more in favor of confirming Kavanaugh and Democrats are more opposed — a polarization that increased in the wake of the sexual misconduct allegations. Polls show Americans who were previously undecided have taken a stance on Kavanaugh since the hearing, largely along party lines.2 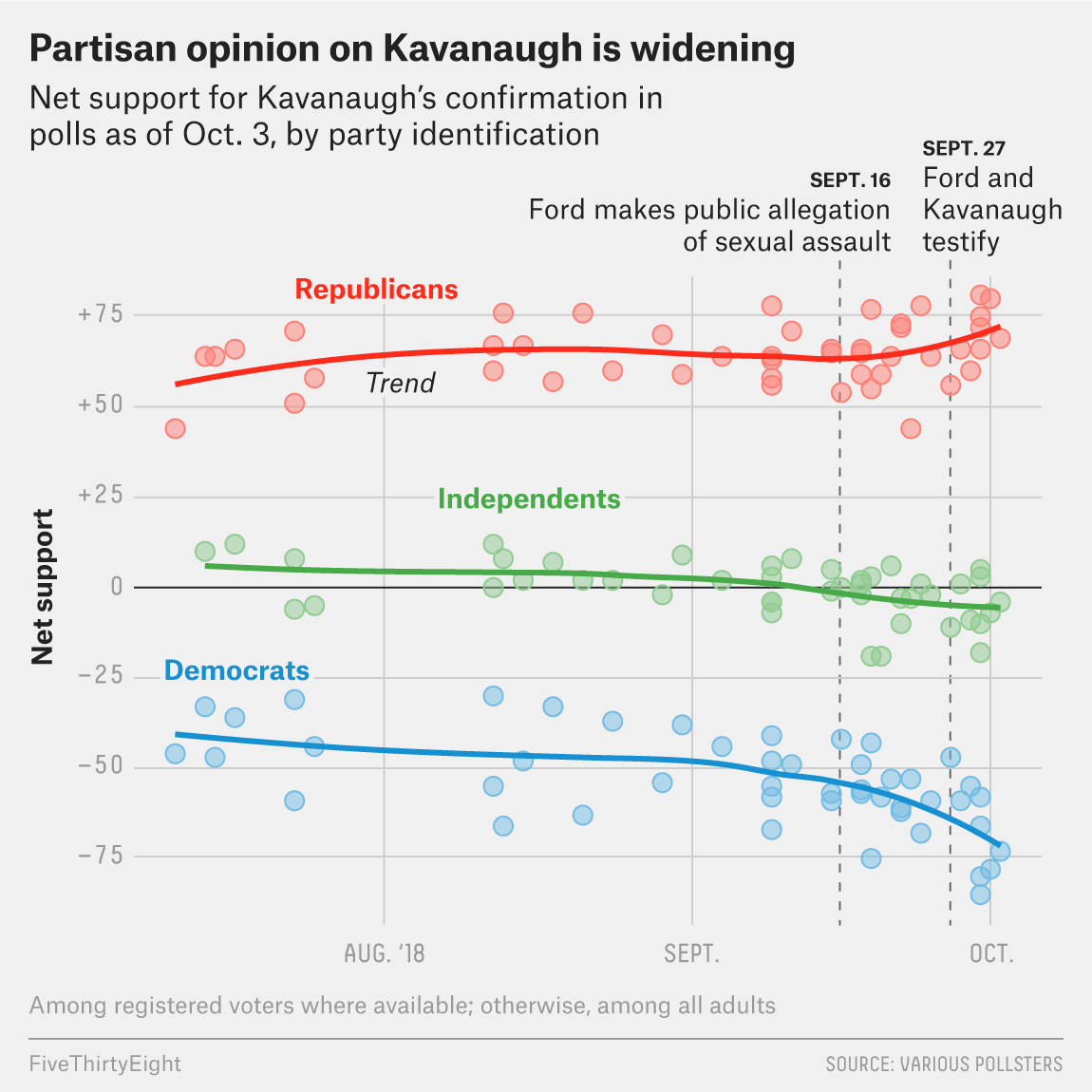 Women are also more likely than men to oppose Kavanaugh. Some polling data we examined for Pollapalooza last week suggested that party allegiance might have weakened as Republican women seemed to sour on Kavanaugh, but recent polls indicate that partisanship is keeping a firm grip on women. On average, in surveys conducted since the Sept. 27 hearing, there has been an 18-point gender gap in net support for Kavanaugh; specifically, net support for Kavanaugh among women has averaged -14 points, while among men, it’s been +4 points. 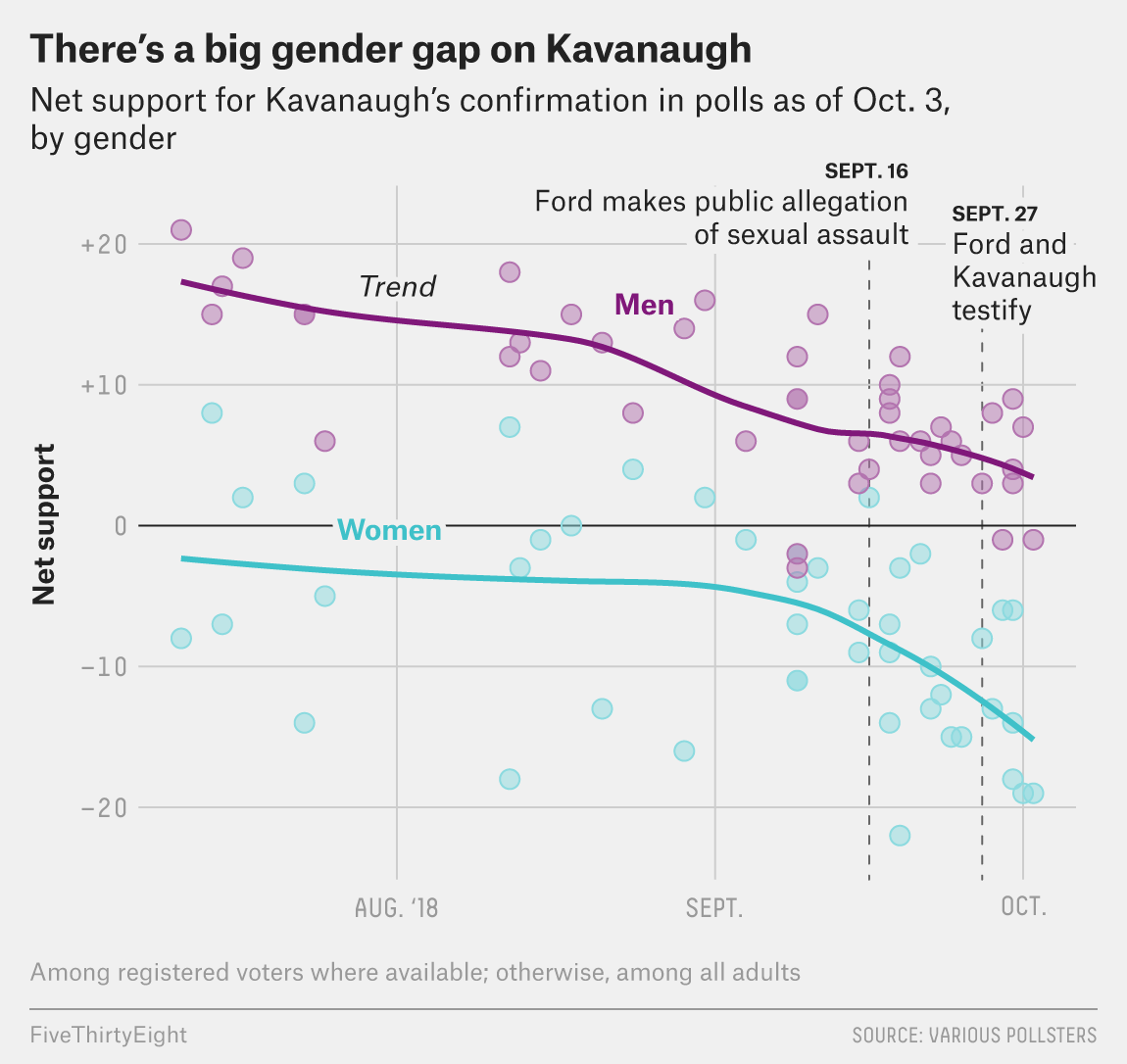 In addition to being divided on whether Kavanaugh should be confirmed, Americans are split (mainly by party) on whether they believe that Ford or Kavanaugh is telling the truth about Ford’s sexual assault allegations. According to a recent Quinnipiac University poll, they’re slightly more likely to believe Ford than Kavanaugh, 48 percent to 41 percent.

Voters are also conflicted about on how they want their senators to vote on Kavanaugh’s nomination. A recent Morning Consult poll found that voters (driven mostly by Democrats) are more likely to support a Senate candidate who votes against Kavanaugh than one who votes for him, by a margin of 36 percent to 27 percent. How senators ultimately vote on Kavanaugh could affect how voters approach the midterm elections. 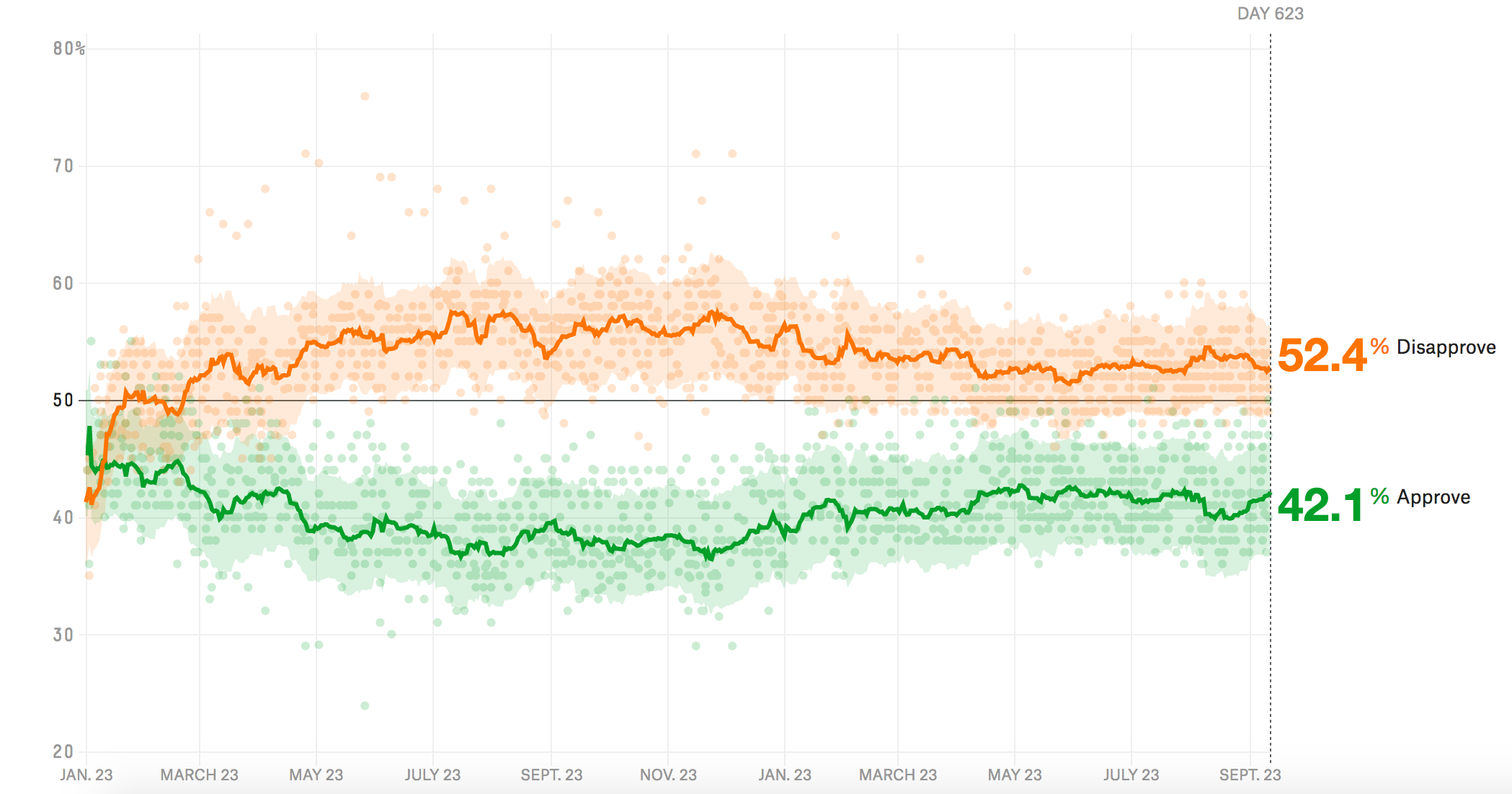 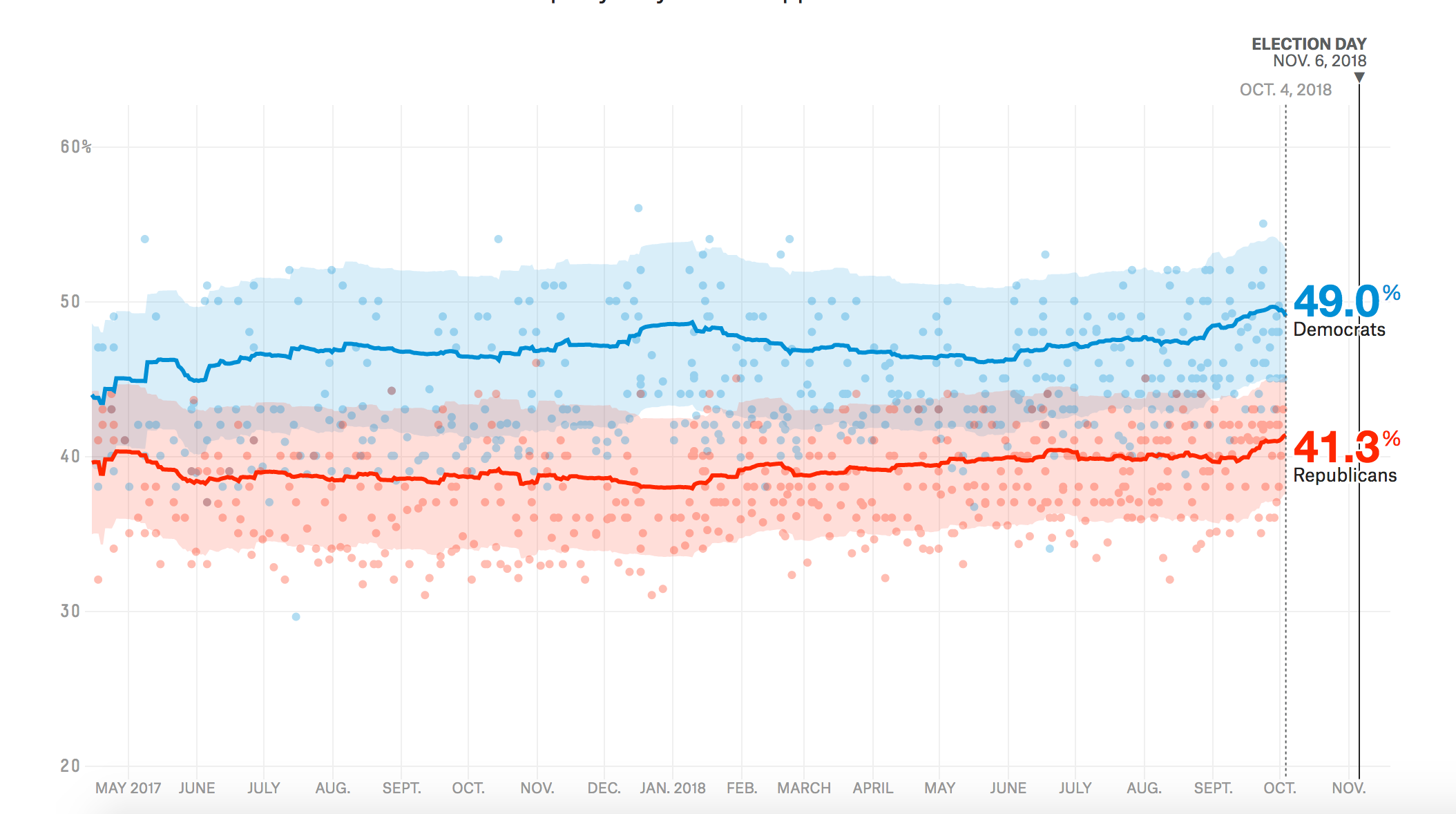 According to our tracker of generic congressional ballot polls, the Democrats’ lead has narrowed to 7.7-percentage points. In a hypothetical matchup, 49.0 percent of Americans would vote for a Democratic congressional candidate and 41.3 percent would vote for a Republican. Last week, Democrats led 49.6 percent to 40.9 percent (an 8.7-point margin). Democrats’ lead is slightly less than it was one month ago, when they had an 8.4-point advantage against Republicans, 48.3 percent to 39.9 percent.