How much do you think prices will rise over the next 12 months? This question has been asked every month back to the late 1970s in the Thomson Reuters/University of Michigan Survey of Consumers. So we’ve had a good sense of consumers’ inflation expectations.

But until only recently, the inflation expectations of businesses were harder to come by. Beginning in late 2011, the Federal Reserve Bank of Atlanta (my former employer) sought to fix this by creating the Business Inflation Expectation (BIE) survey and publicly releasing its results. About 300 panelists receive the survey each month. The number of respondents in the most recent survey, released Wednesday morning, came in at 181 — not a huge sample, but enough to get a consistent trend.

How do businesses’ predictive abilities stack up against consumers’? The chart below plots the Thomson Reuters/University of Michigan consumer inflation expectations against the BIE expectations. Both surveys ask their respondents about expected inflation in the year ahead. So, along with these monthly estimates, I’ve plotted the actual year-ahead estimates of the personal consumption expenditures (PCE) price index, the preferred inflation measure of the Fed. Because the most recent PCE data is for February 2014, the chart below only goes through February 2013, as the benchmark for both expectations’ measures is inflation over the next 12 months. 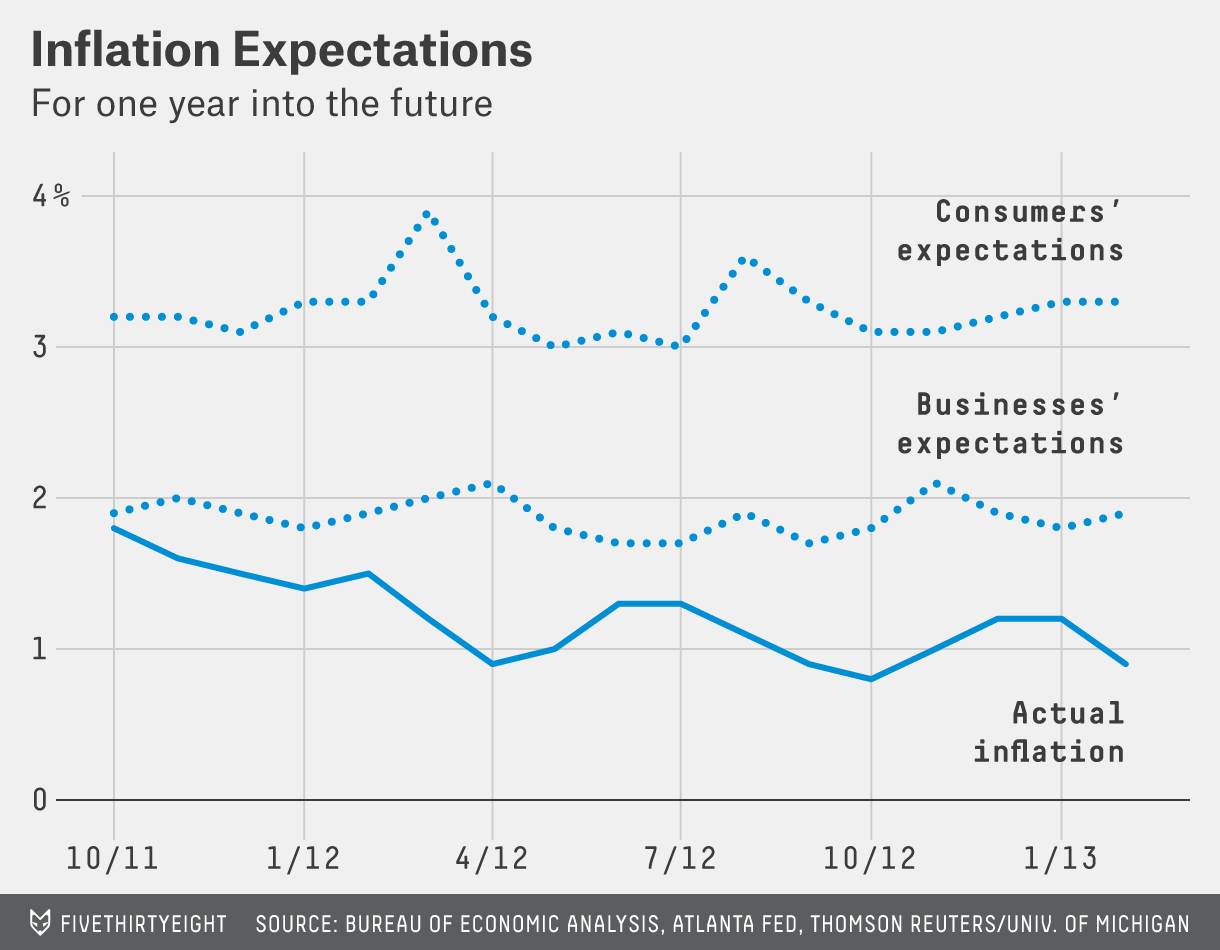 From this analysis, businesses’ expectations perform much better than consumers’, although both have expected higher inflation than what materialized.

This is perhaps unsurprising, as businesses have more resources and financial incentives in making their forecasts. Furthermore, consumers incorporate different information in estimating inflation — certain prices, such as those for gasoline and food, are more highly correlated with consumer expectations and may exhort an inordinate amount of influence on short-term fluctuations.

The more well-known consumer price index (CPI) attempts to proxy individual consumption baskets, and it runs a few tenths higher than the PCE. So businesses would still come out as better prognosticators.

Why do we care? Data on inflation expectations are crucial in making monetary policy, as the Federal Reserve closely watches these series to monitor any signs of an unanchoring in expectations.