Tonight’s Iowa caucuses kick off a multi-step process that will eventually send 41 pledged delegates to the Democratic National Convention. But did you know that only 14 of them are assigned to candidates based on their statewide results in Iowa? The remaining 27 are based on the results in each of the Hawkeye State’s four congressional districts.

[Our Latest Forecast: Who will win the Iowa caucuses?]

In fact, about two-thirds of all pledged delegates nationwide aren’t assigned at the state level, which is why our primary forecast also estimates delegates at the congressional-district level in most states.1 These estimates are based on the demographic makeup of each district relative to its state — so in other words, as editor-in-chief Nate Silver wrote in our forecast methodology, just like we can forecast a candidate’s relative strength in one state vs. another, we can also forecast which districts are likely to be relatively strong (or weak) for a candidate. (That said, due to the large amount of uncertainty inherent in this type of probabilistic forecast, these estimates aren’t terribly precise.)

And in Iowa specifically, we don’t anticipate huge variation in the district-level results. That’s because all four districts are politically and demographically pretty similar, both to one another and the state as a whole. So just as former Vice President Joe Biden and Sen. Bernie Sanders are roughly tied for first place statewide, our model thinks they are vying for the pledged-delegate lead in each congressional district as well. Likewise, our forecast thinks former South Bend, Indiana, Mayor Pete Buttigieg, Sen. Elizabeth Warren and Sen. Amy Klobuchar will garner fewer delegates on the district level than Biden and Sanders.

Still, it’s possible that there will be some variation in the results from one district to another — and understanding Iowa’s political geography will be important if you plan to follow the results with us tonight in real time. So let’s make like Chuck Grassley and take a full tour of the state. 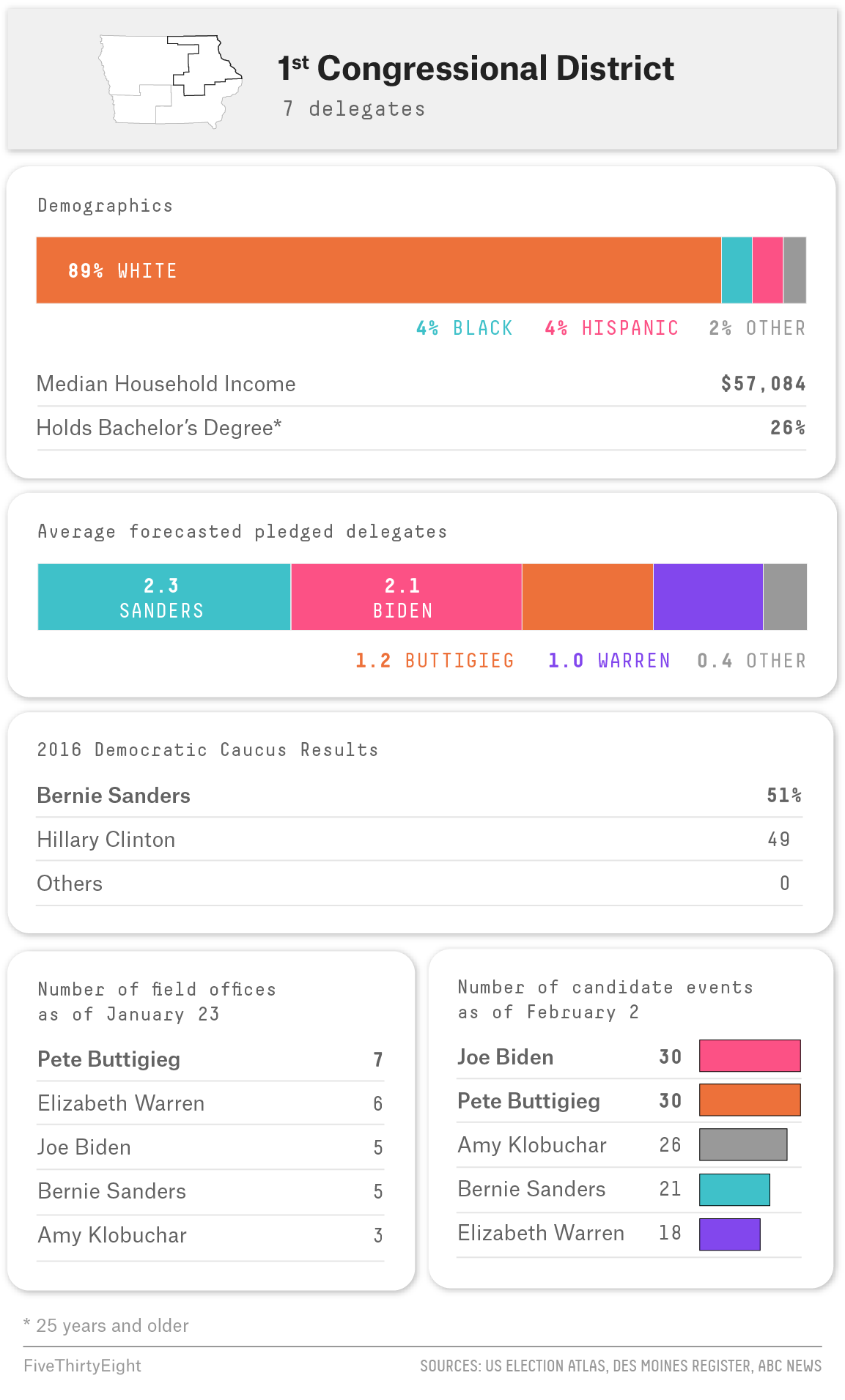 In northeastern Iowa, the 1st District contains the cities of Cedar Rapids, Waterloo and Dubuque, plus several rural counties. With a population that is 89 percent non-Hispanic white, it is the least diverse district in Iowa, though the differences are pretty small (the most diverse district in Iowa, the 3rd, for instance, is 84 percent white). And in the 2016 Democratic caucuses, Sanders and former Secretary of State Hillary Clinton fought to a near-draw here, just like they did statewide.

Our model expects Sanders to receive an average of 2.3 delegates, Biden to receive 2.1, Buttigieg 1.2 and Warren 1.0.2 But it’s Biden who seems to be putting a lot of effort into this part of the state. According to the Des Moines Register’s tally of candidate appearances, since Sept. 1, he has held the highest share of his campaign events3 in the 1st District. This makes sense, too, given Dubuque’s history as a center of industry and Waterloo’s large (for Iowa) African-American population. 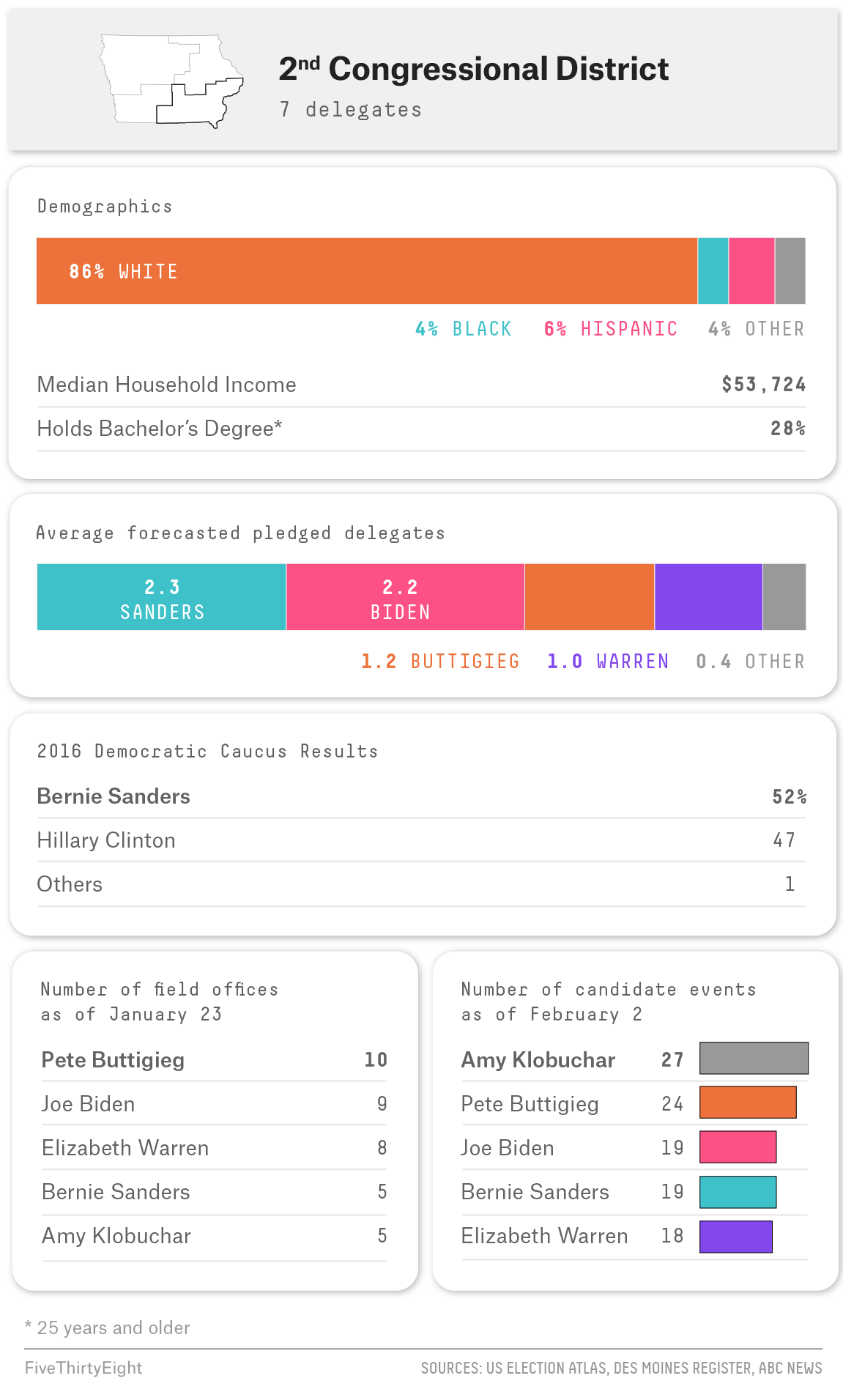 The 2nd District covers southeastern Iowa, whose many manufacturing cities along the Mississippi River have struggled to recover since the Great Recession. Candidates venture to cities like Davenport and Clinton, which both have levels of educational attainment and median incomes lower than the state average, to talk about the plight of the working class. To take one extreme example, Andrew Yang, who emphasizes the impact that job automation is having on the American workforce, has held 43 campaign events in the 2nd District, more than any of the top five candidates have held in any Iowa district.

At the same time, Iowa City is home to the 32,000+ students at the University of Iowa. These two factors probably played a big role in making the 2nd District Sanders’s best district in Iowa in 2016, although it was still close (Sanders beat Clinton by about 5 points). Our forecast currently predicts Sanders will win 2.3 delegates, on average; Biden 2.2; Buttigieg 1.2; and Warren 1.0. 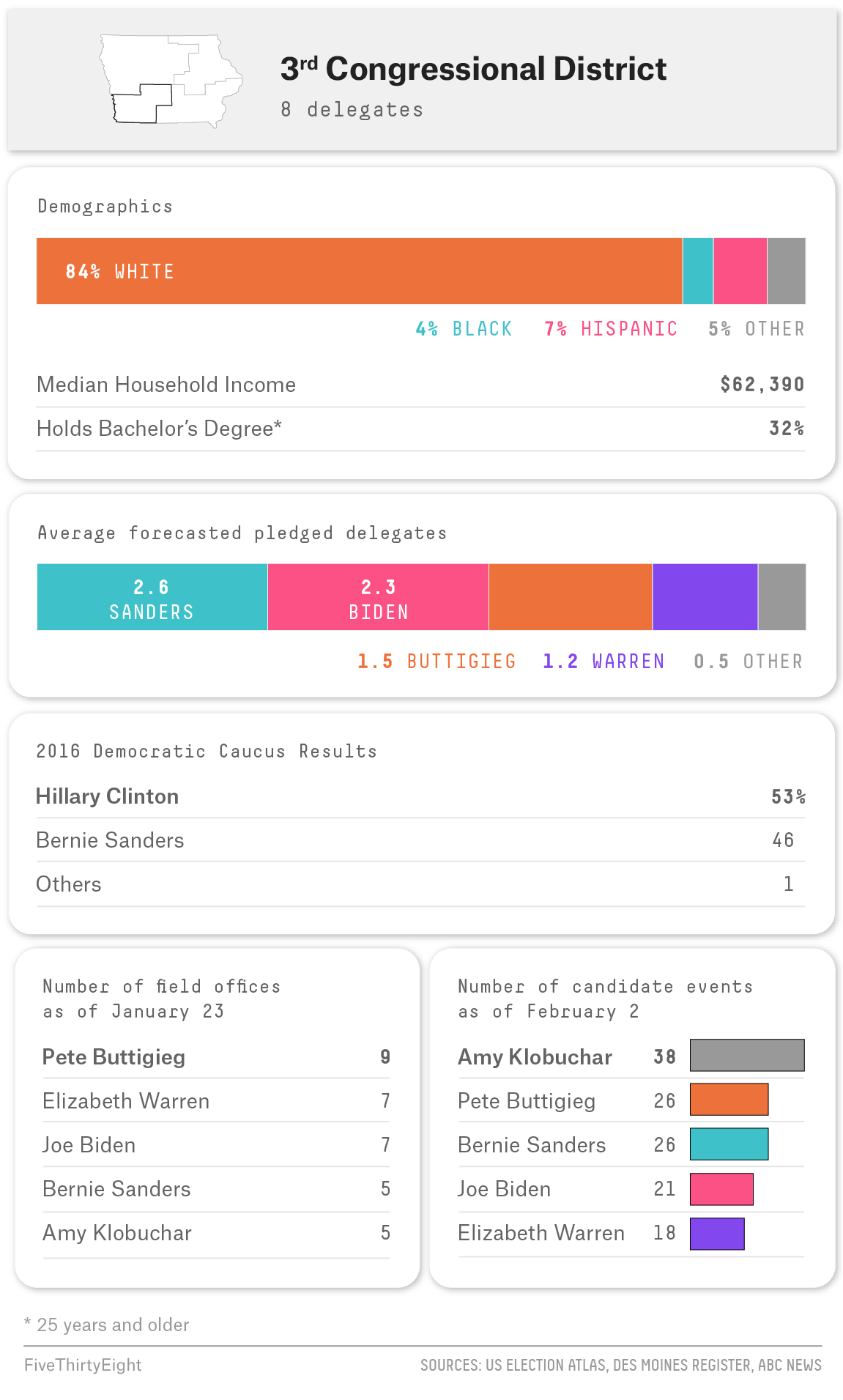 Anchored by metro Des Moines, the southwestern 3rd District is the least white, most college-educated and most affluent district4 in Iowa — but again, not by much, as the presence of several rural counties brings the district’s overall demographics more closely in line with those of the state. Accordingly, we are forecasting its delegates to break down similarly to the statewide delegates: an average of 2.6 for Sanders, 2.3 for Biden, 1.5 for Buttigieg and 1.2 for Warren. (Everyone’s forecasted delegate hauls are bigger in the 3rd because the district sends eight delegates to the DNC, the most of any district in Iowa.)

But different parts of the district might vote very differently. Polk County (home of Des Moines proper), as well as exurban Dallas and Warren counties, are wealthier and more college-educated than the state average. Given their bases of college-educated white voters, Buttigieg and Warren could do well in these counties. However, Polk is also 23 percent nonwhite, providing an opening for Biden in the state’s most delegate-rich county.

If the 2016 results are any indication, the Democratic electorate in the 3rd District is also Iowa’s least progressive; Clinton beat Sanders by about 7 points here, making it her best district. Klobuchar may be well positioned to benefit from that: She has held 38 events in the district since Sept. 1, more than any other candidate. 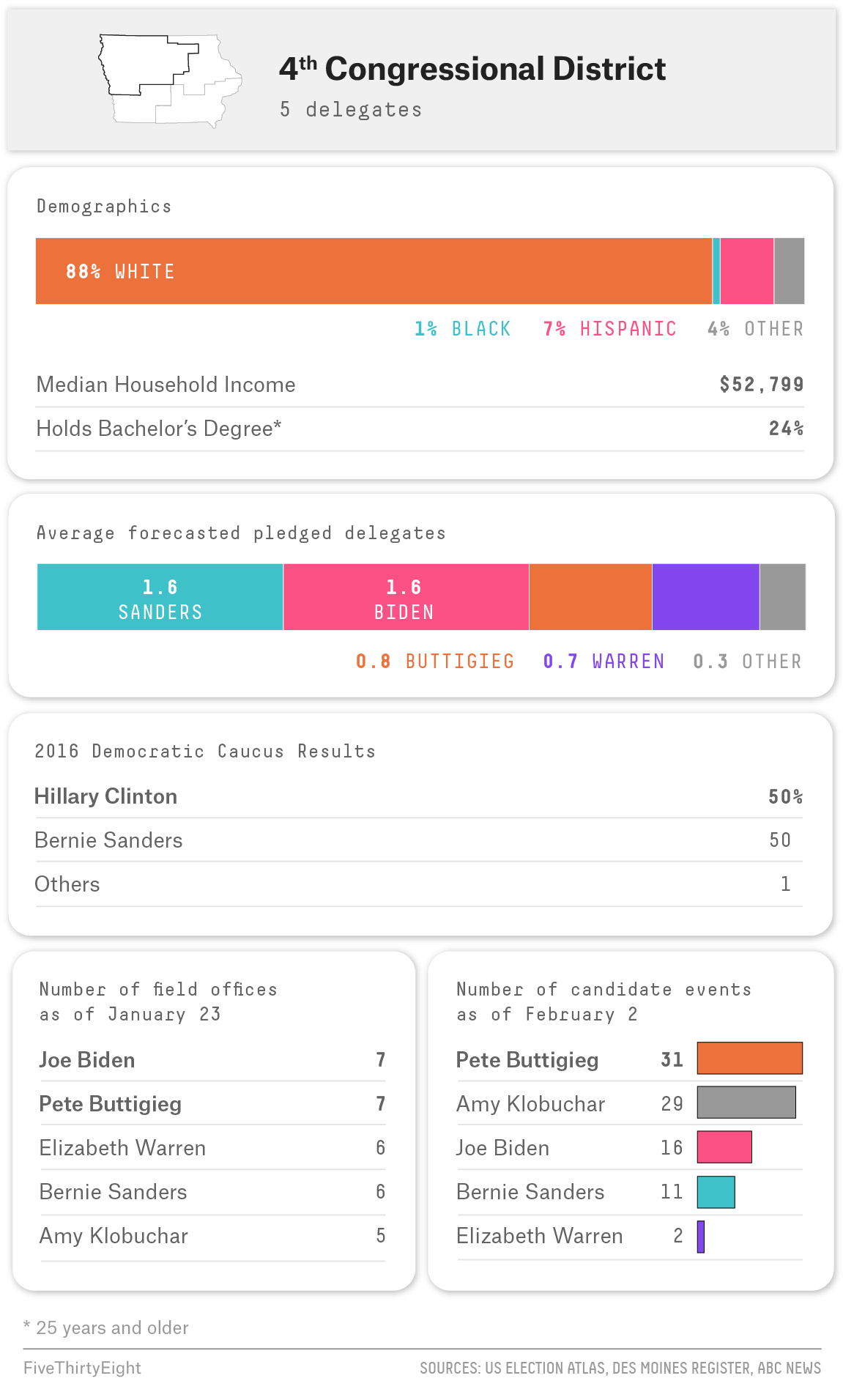 Finally, the 4th District encompasses the rural northwestern corner of Iowa, including a sizable evangelical population. Unsurprisingly, it is solidly Republican in general elections, which also means it is worth the fewest Democratic delegates (five) of any Iowa district. Take out those Republicans, though, and you’re left with a Democratic electorate very similar to the rest of the state. In the 2016 caucuses, Clinton received approximately 49.7 percent in the 4th District while Sanders earned 49.6 percent — almost identical to their statewide performances.

Our forecast expects the 4th District to see another close contest between the establishment and progressive wings of the party: In the model, Sanders and Biden each receives 1.6 delegates on average, Buttigieg 0.8 and Warren 0.7. Buttigieg in particular has spent a lot of time here: The 31 campaign events he’s held in the 4th District since Sept. 1 are more than he has held in any of the other three districts (despite them being worth more delegates…). By contrast, Warren has been a relative stranger in the 4th District, holding just two events here in the past five months.

Despite the demographic similarities of Iowa’s congressional districts, we might still see some candidates distinguish themselves in certain areas — and those differences could matter for the delegate math. Tune into our live blog tonight, where we’ll be tracking the results district by district as well as overall.