We continue our Presidential Geography series, a one-by-one examination of the peculiarities that drive the politics in all 50 states and the District of Columbia. Here is Iowa, the Hawkeye State. FiveThirtyEight spoke with David Yepsen, the director of the Paul Simon Public Policy Institute at Southern Illinois University, Carbondale, formerly a longtime political writer and editor at The Des Moines Register.

President Obama campaigned in Cedar Rapids, Iowa, on Tuesday, his 10th trip to the state as president. It was the ninth time this year that Mr. Obama, Michelle Obama or Vice President Joseph R. Biden Jr. has visited Iowa. Mitt Romney, of course, spent weeks in Iowa in the run-up to the state’s Jan. 3 caucuses and has returned a number of times since.

Why is a state with only six electoral votes getting such attention? It’s a swing state in every sense of the word. First, Iowa has an approximately equal number of registered Republicans and registered Democrats. Second, it is one of the most elastic states, with a large swath of unaffiliated voters who are persuadable, and could plausibly vote for either Mr. Obama or Mr. Romney.

Iowa’s competitiveness is partly a function of demographics, but the state’s current political dynamic is also a consequence of Iowa’s prominent role in the presidential nominating process, according to Mr. Yepsen. “The caucuses have helped contribute to the creation of a healthy two-party system,” he said. “Every four years, one party or the other or both, was really doing some intense grass-roots political work.”1 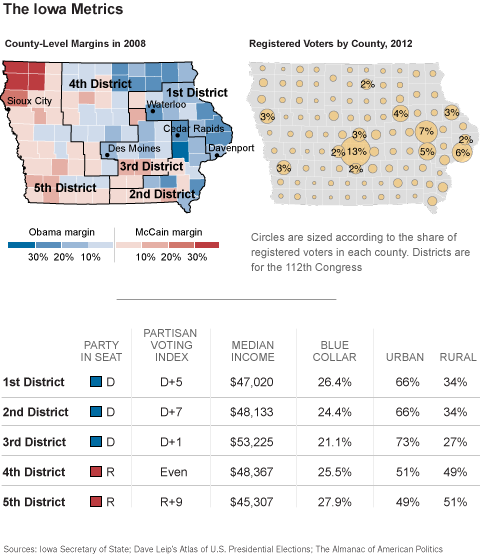 Historically, Iowa was solidly Republican, and the state is relatively homogeneous racially, nearly 90 percent white. But as the state’s economy and demography changed, so did its politics. 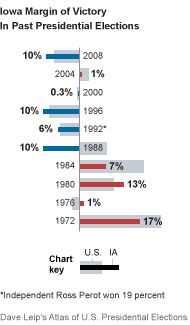 “The farm crisis of the 1980s really broke the back of the Republican Party,” Mr. Yepsen said.

The number of Iowans working primarily in farming — the power source of the state’s G.O.P. — dropped to 56,000 in 1997 from 86,000 in 1982, according to The Almanac of American Politics. Iowa compensated for its slumping agricultural industry by adding white-collar and high-tech jobs and nurturing a growing financial services industry. Today, the state’s economy no longer relies so heavily on farming, and economic diversity, in turn, led to more political diversity. Iowa now has a more unusual profile.

It is the 12th most rural state by population, yet it is just about average in terms of median family income. It is also educated — about 91 percent of residents age 25 or older had at least a high school degree in 2009, placing the state seventh among all 50 states according to the Census Bureau’s American Community Survey.2

Iowa is also less politically segregated than many other states.3 With a few exceptions, Republicans are competitive in Iowa’s Democratic-leaning regions, and vice versa.

Eastern Iowa tends to vote Democratic, but not by huge margins. There are blue-collar Democrats — many who work for the automobile industry or in other manufacturing jobs — in Dubuque and Davenport, Mr. Yepsen said. And there are liberal voters in Iowa City, where the University of Iowa is situated. The Democratic voters in southeastern Iowa, however, tend to be of the more conservative, yellow dog variety. Mr. Obama lost some of these southeastern counties to John McCain in 2008.

Western Iowa, where agriculture is still the backbone of the economy, is the most conservative part of the state, culturally and ideologically akin to its western neighbor, Nebraska. Religious conservatives are dominant in the northwest.4 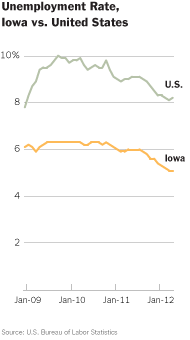 The Republican governor, Terry Branstad, even edged out a victory in Polk in 2010.

Iowa has a relatively small but fast-growing Hispanic population, spread out fairly evenly throughout the state. Despite making up only 5 percent of the state’s population, Iowa’s Hispanics are being heavily courted by the Obama campaign, Mr. Yepsen said. There are Latino communities in Des Moines; smaller cities like Davenport, Muscatine and Storm Lake; and meatpacking towns like Columbus Junction.

In the past three presidential elections, the vote in Cedar County has exactly matched the statewide vote. There has not been even a one percentage point difference. Here’s the catch: only 9,665 people voted in Cedar County in 2008. Because of the small size of Cedar — the county seat, Tipton, has slightly more than 3,200 residents — the county’s penchant for mirroring the statewide vote may be just a fluke, and it is possible Cedar’s preferences in 2012 will diverge widely from the state’s over all.

According to the current FiveThirtyEight forecast, Mr. Obama is a 65 percent favorite to win Iowa.

Because Iowa’s partisan armies are about the same size and a large chunk of residents are genuinely swing voters, the electoral outcome is subject to more factors — and more uncertain ones — than most states. In states like North Carolina and Pennsylvania, which have a roughly equal partisan balance but few true swing voters, turnout will be a chief determinant in November. In Iowa, however, the campaigns need to turn out their base and court the state’s large
bloc of independent voters.

In Mr. Obama’s favor is the state’s low unemployment rate, which is well below the national rate and may be helping him with those unaffiliated voters. But Mr. Romney has advantages, too.

In 2008, registered Democrats outnumbered registered Republicans in Iowa, and Mr. Obama carried the state by 10 percentage points. But the 2012 Republican presidential caucuses — by engaging and registering conservative voters — seems to have helped to even things out again, Mr. Yepsen said. Republicans now outnumber Democrats.

The Republican caucuses, and the absence of a competitive Democratic campaign, may also help Mr. Romney in another respect: “The media pounding that Obama took from Republicans in the state will still take a toll on him in November,” Mr. Yepsen said, “That leaves a taste in the mouth.”

1: Notably, New Hampshire, the nation’s other darling of the primary campaign, is also both elastic and fairly equally balanced in voter registration among Democrats and Republicans.

2: Iowa ranks far lower in the attainment of bachelor’s degrees and advanced degrees.

3: Rick Santorum’s famous trek across all 99 of Iowa’s counties would not have made sense otherwise. In Iowa, there are Republicans and Democrats throughout the state.

4: This area is clearly visible in dark red in the map of 2008 county-level results above.