The 87th Academy Award nominees were announced Thursday morning, kicking off a frenzied month of speculation as to who will take home the most prestigious prizes in filmmaking.

Best picture nominations went to “American Sniper,” “Boyhood,” “The Imitation Game,” “Birdman,” “Selma,” “The Theory of Everything,” “The Grand Budapest Hotel” and “Whiplash.”

“Boyhood” took top honors at the Golden Globes, but that isn’t all that helpful in predicting the eventual Oscar winner. Perhaps after the Producers Guild, Directors Guild and Screen Actors Guild dole out their prizes, we’ll have a slightly better sense of the best picture race.

Betting markets are in on the game, though, and could provide some clues as to what will win. Markets did pretty well in predicting the nominations.

For a solid look at the betting market expectations for what was going to get nominated, you can check out the site’s NominOptions. For most of the categories, the payout is H$12 if the film or person is nominated and H$0 if it’s not. For the best picture category, the payout depends on how many films get nominated in total — payout to nominated films are H$9 if there are 10 nominees, H$10 if there are 9, H$11.25 if there are eight and so on, up to H$18 if there are only five nominees.

Trading stopped at 6 p.m. Wednesday. Here were the final costs of a “share” of each film to get nominated for best picture: 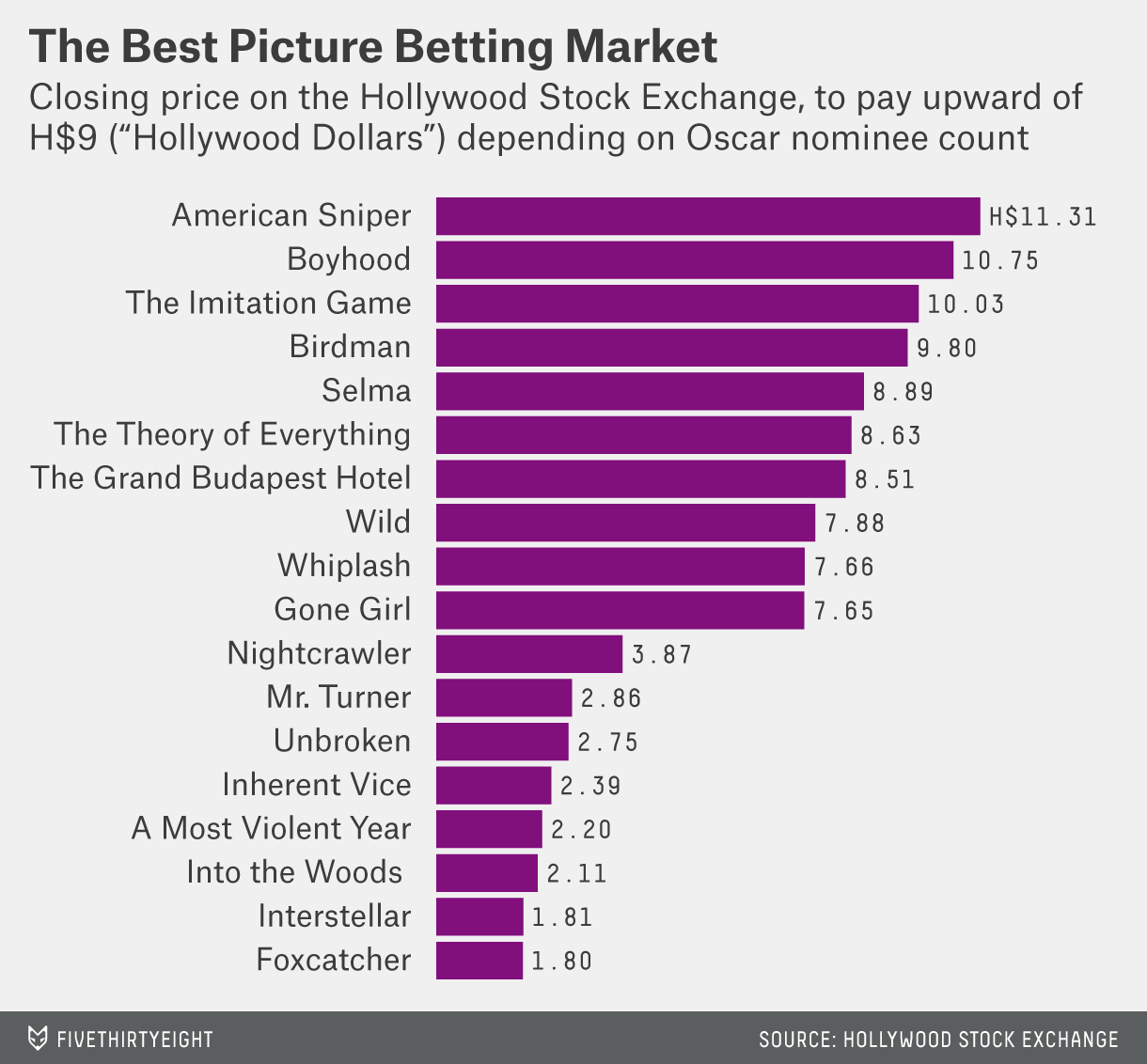 The betting market basically nailed it. All eight films nominated were among the top nine favorites on the HSX. The eighth-ranked film — “Wild,” starring Reese Witherspoon, caught the snub.

The same thing happened in the supporting actress category, with Laura Dern (“Wild”), in 12th and last place in the betting market prices, getting nominated in addition to the top four.

Wes Anderson was nominated for best director (for “The Grand Budapest Hotel”), and Anderson wasn’t even on the HSX list. That category included a snub for third-ranked Clint Eastwood (“American Sniper”), as well as a boost for 10th-ranked Bennett Miller (“Foxcatcher”).

If there’s a big loser, it appears to be “Gone Girl.” Rosamund Pike, in the best actress category, is the only nominee for the much-touted film, despite otherwise high expectations in the markets. And though “Selma” made it into the best picture category, it was otherwise snubbed.

Monitoring betting markets has been one of the more consistent ways to get inside the Academy’s head. It’s going to be a frenetic few weeks, but it may be worthwhile to keep and eye on the third-party betting markets to see who’s putting their (fake) money where their mouth is.