Our nation’s drunkest entertainment awards show, the Golden Globes, took place Sunday night; the Hollywood Foreign Press Association — several members of which are neither foreign nor members of the press — entertains the world with awards for the best television shows and movies of the past year.

So, after an evening of jokes from two of America’s finest comedians, the main thing of interest is what the Globes’ results mean for the film awards show that actually matters, the Academy Awards. The answer? Not much!

In 2013, my colleague Nate Silver analyzed the track records of various award shows in predicting the Oscar for best picture. Here’s how that came out: 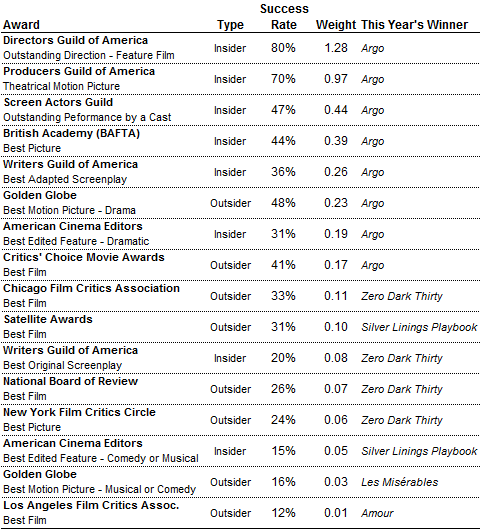 The Golden Globes rank sixth, with a 48 percent win rate as of 2013; the Director’s Guild of America Awards was the most highly correlated with best picture success. Factoring in the past two years — with “Argo” and “12 Years a Slave” winning both the Globe and the Oscar — the success rate for Golden Globe drama winners stands at about 49 percent.

So, about even odds. If you really want insight, keep an eye on the DGA Awards on Feb. 7. Despite going for “Gravity” last year, they’re still the best game in town.