Hillary Clinton’s campaign is now telling reporters that she is at risk of losing Iowa to Bernie Sanders in the February caucuses. One ought to view these stories a bit cynically: It almost always benefits a candidate to lower expectations in Iowa, and these warnings are often designed to activate lethargic supporters. At the same time, the campaign press loves stories that suggest it’ll have a competitive Democratic primary rather than a walkover.

Sanders, who has sometimes described himself as a socialist, isn’t likely to do so well with moderate Democrats, of course. That’s a problem for him, since a thin majority of Democrats still identify as moderate or conservative rather than liberal. But Sanders has a few things working in his favor. The share of liberal Democrats is increasing — pretty rapidly, in fact — and those Democrats who turn out to vote in the primaries tend to be more liberal than Democrats overall.

In fact, along with the Democratic electorate in Sanders’s native Vermont, those in Iowa and New Hampshire are as favorable to him as any in the country. In the chart below, I’ve listed the share of Democratic voters who identified as liberal, and as white, in the 39 states where the networks conducted exit polls during the 2008 Democratic primaries. Then I’ve multiplied the two numbers together to estimate the share of Democrats in each state who were both white and liberal.1 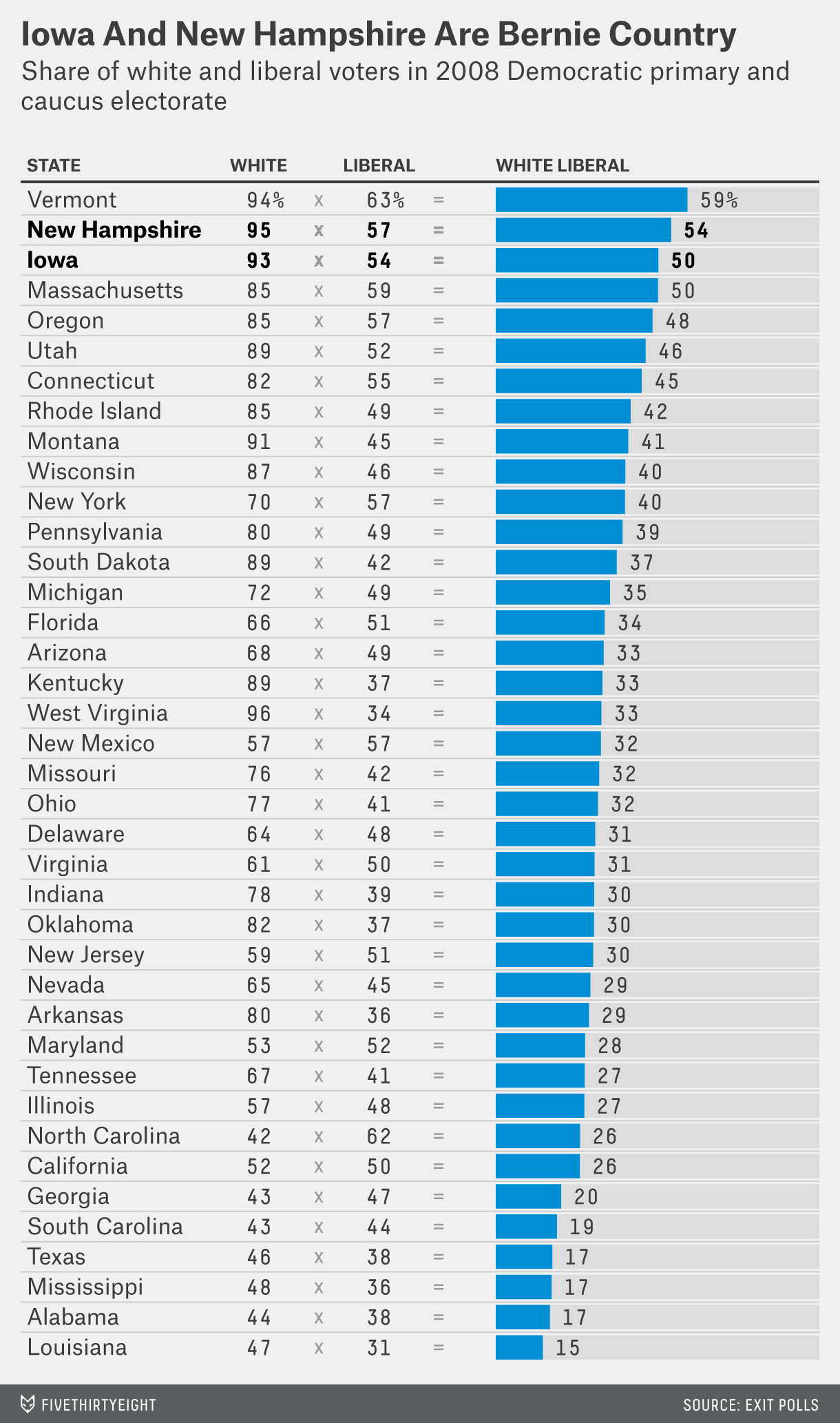 I estimate that 54 percent of the voters in the New Hampshire Democratic primary were white liberals in 2008. That’s the second-highest figure in the country,2 after Vermont (59 percent). In the Iowa caucus, meanwhile, white liberals made up 50 percent; that put the state in a tie with Massachusetts for the third-highest percentage.

The percentage of white liberals isn’t so high in other early primary states, however. It’s just 29 percent in Nevada and 19 percent in South Carolina. The percentage is also low in high-population, delegate-rich states like California (26 percent) and Texas (17 percent).

Put another way, Iowa and New Hampshire aren’t representative of the more diverse electorates that Democrats will turn out elsewhere. It just so happens that the idiosyncrasies of the first two states match Sanders’s strengths and Clinton’s relative weaknesses.

Clinton performed well among Hispanic voters in 2008, and while her failure to win African-American votes was a central reason her campaign failed, she now has excellent favorability ratings among black voters that are nearly as high as Barack Obama’s. If Clinton begins to see her support erode among those groups, her campaign will have some real reason for concern. Otherwise, just as was the case throughout the 2008 campaign, the media will misconstrue voting patterns that occur because of demographics and attribute them to “momentum” instead.