Trust is the foundation of any successful relationship — including the relationship between the government and the governed. And during a pandemic like this one, it’s no abstract matter.

When people trust their government, they are more likely to listen to its advice, such as staying 6 feet away from other people and not gathering in large groups; studies have found that people with lower trust in government take fewer safety measures for their health, as Maggie Koerth wrote for FiveThirtyEight last month.

In the U.S., public trust in government has been on the decline for decades. However, when it comes to dealing with the coronavirus, recent polls do show that Americans generally have faith in their government. We collected all the polls we could find that asked whether people have trust or confidence in the federal government to handle the coronavirus pandemic or to disseminate reliable information about it. In every such poll conducted since the beginning of March, more Americans said they were very or somewhat confident in the government than said they were not very or not at all confident.1 That said, there was still a fair amount of variation (e.g., the total who generally trusted the government ranged anywhere from 45 percent to 66 percent). 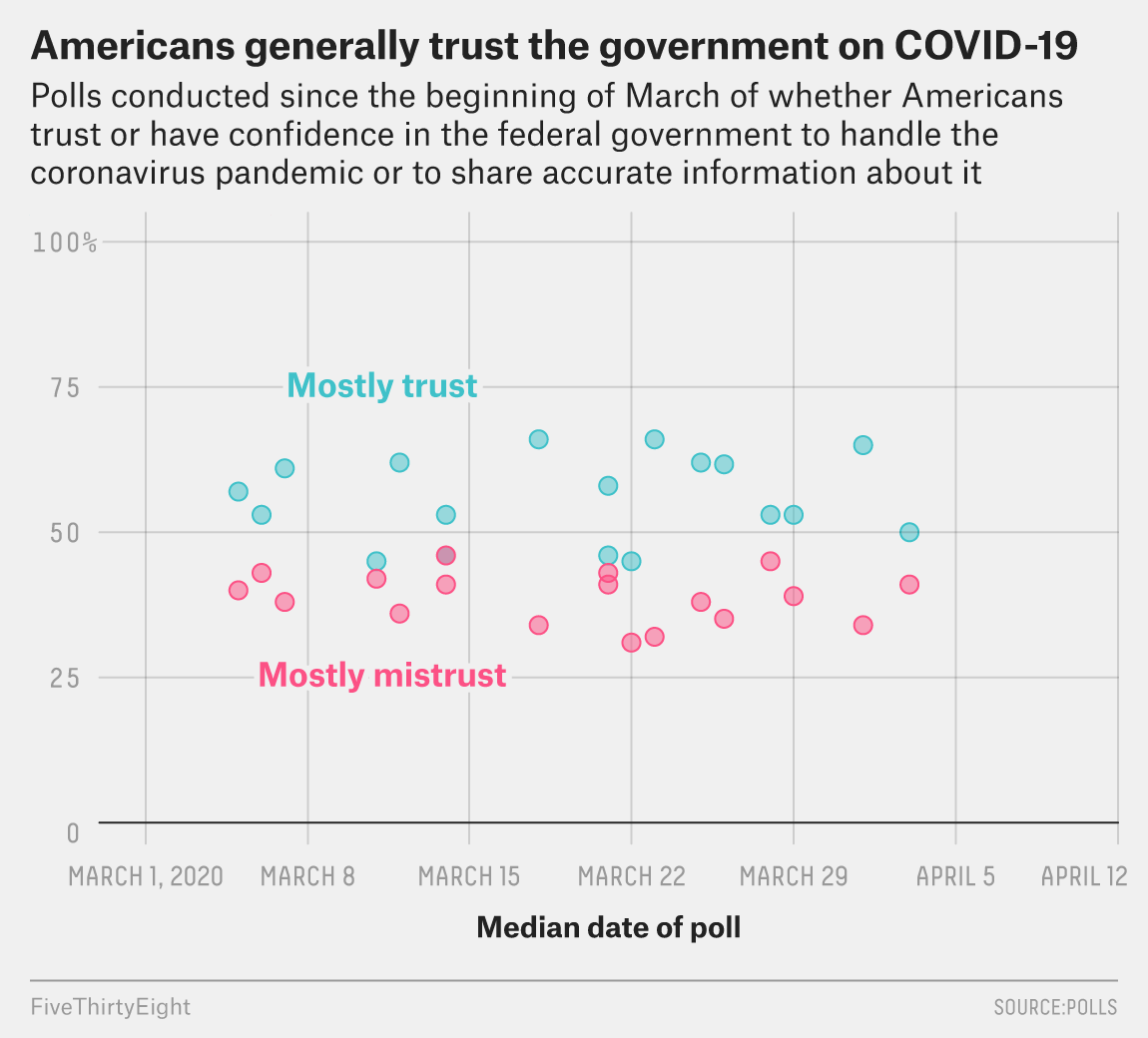 On average, 56 percent of Americans said they were at least somewhat confident in the government on the coronavirus, compared with 39 percent who said they were not very or not at all confident. Notably, Americans’ level of trust in the government hasn’t changed noticeably over time, even after the White House started holding daily briefings and Congress has passed several stimulus packages to help the country through the crisis.

But “federal government” is a very vague term that can encompass everything from specific politicians to professional agencies. And indeed, it turns out that Americans trust certain institutions or people more than others. For example, Americans overwhelmingly have confidence in the Centers for Disease Control and Prevention. Total trust for the CDC has consistently been in the 80s since the beginning of March, while mistrust has hovered in the teens. 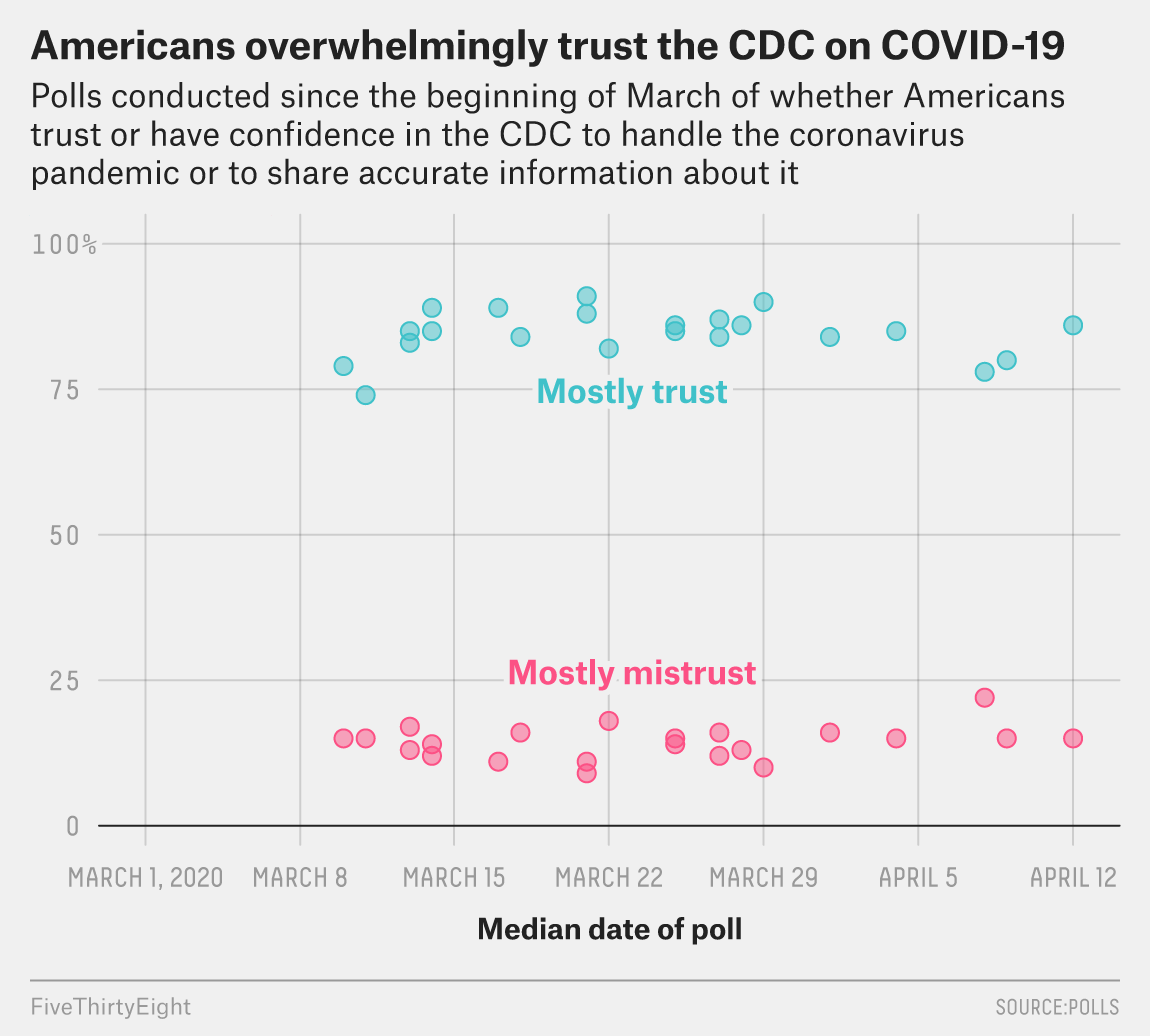 On the other hand, President Trump consistently gets low grades on trust. In the average poll since the beginning of March, 43 percent of Americans say they at least somewhat trust him on the coronavirus, and 53 percent say they only trust him a little bit or not at all. Again, these numbers have barely moved over the course of the crisis, even when his overall approval rating experienced a small bump. 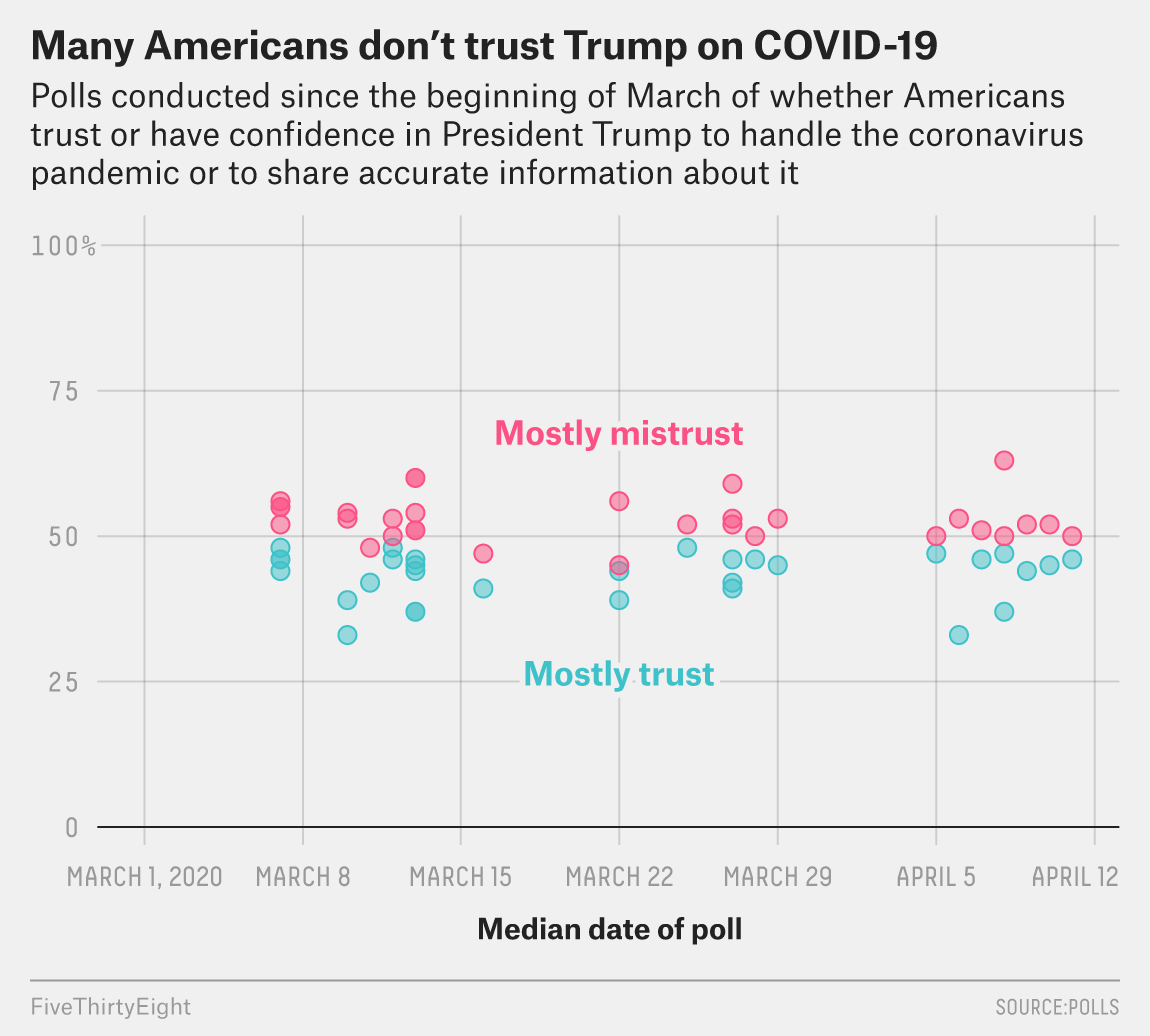 Still, those numbers track pretty closely with Trump’s overall approval rating, suggesting that this is good old partisan polarization at play — those who like Trump overall say they trust him on this specific issue, and those who don’t say they don’t trust him on the coronavirus. Although not every poll was broken down by party, in those that were, Republicans said they trusted Trump 82 percent to 15 percent, while Democrats said they mistrusted him by almost the exact same margin: 83 percent to 14 percent.

Trust in coronavirus task force chair Vice President Mike Pence was also polarized by party, but not as severely. On average, Republicans say they are mostly confident in Pence, 78 percent to 15 percent, while Democrats say they mostly are not, 72 percent to 21 percent. And overall, Americans are split right down the middle on whether to trust Pence on the coronavirus: In the average poll since the beginning of March, 45 percent mostly trust him, and 46 percent mostly don’t. 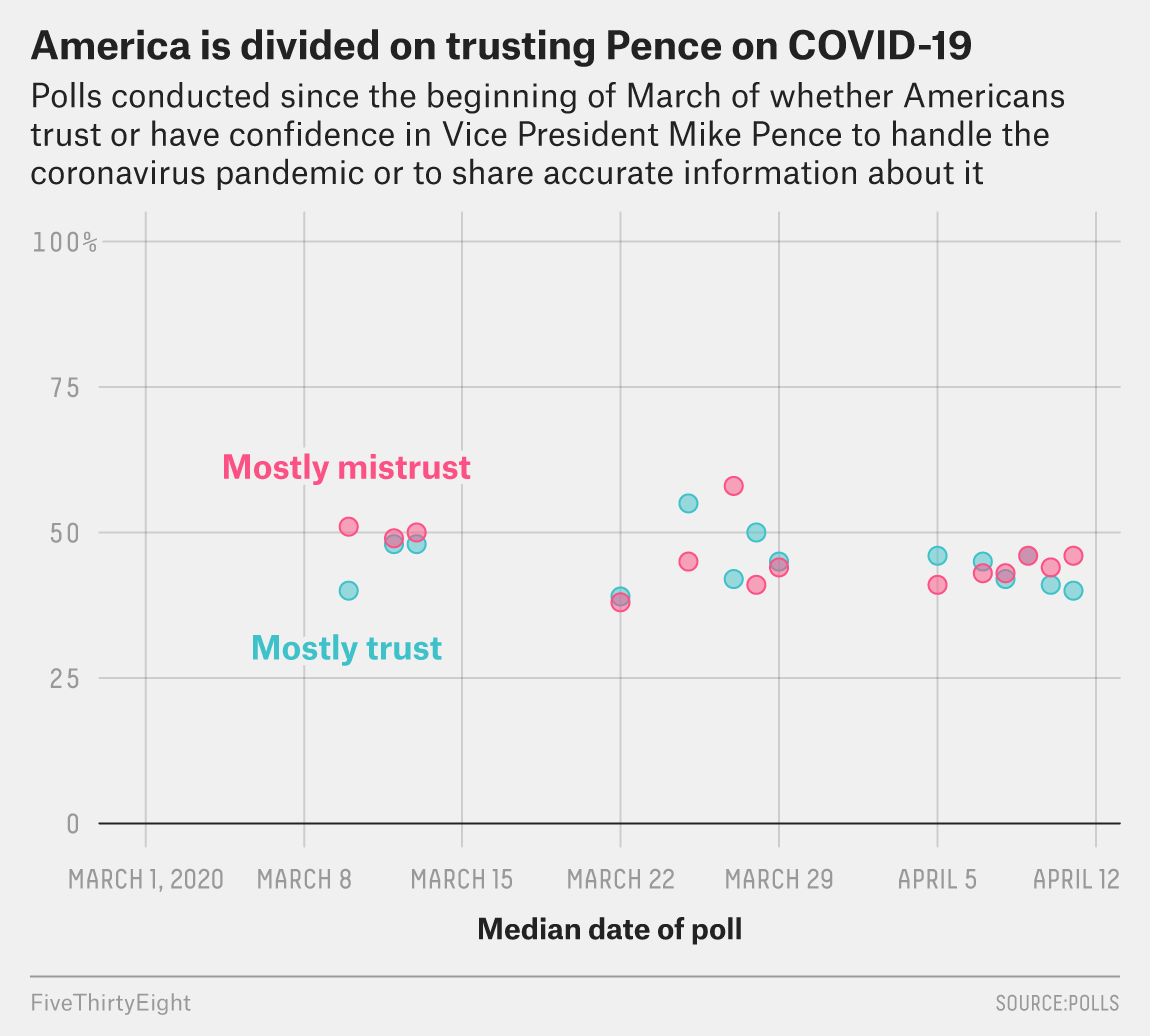 We only have a couple recent polls on whether Americans have confidence in Congress on the issue of the coronavirus, but they fall closer to Trump’s numbers than the CDC’s. According to an Ipsos/USA Today poll conducted April 9-10, 41 percent of adults said they had a “great deal” or “fair amount” of trust in Congress to provide accurate information about the coronavirus, while 53 percent said they had “not very much” or “none at all.”

Finally, it’s not part of the government, but the news media is arguably the most important institution in terms of having public trust. But unfortunately, the country is divided on whether to trust the accuracy of news reports on the coronavirus. On average since the beginning of March, 46 percent of Americans say they mostly trust the media to report accurately on the coronavirus, and 46 percent say they mostly do not. 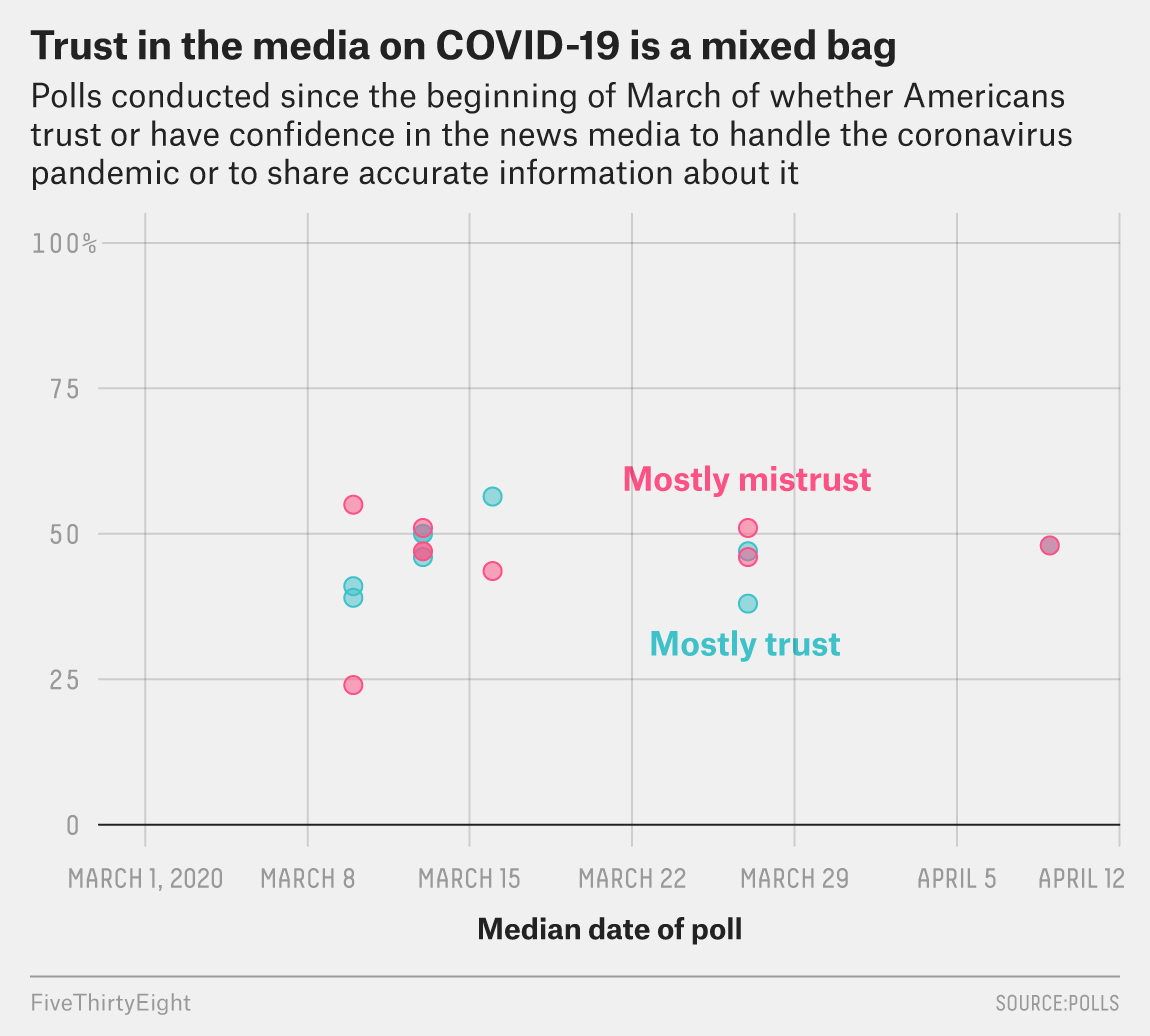 That could be a problem, since an astonishing 89 percent of Americans said that they are following news on the coronavirus either fairly or very closely, according to a poll from the Pew Research Center conducted in mid-March. If the public doesn’t trust the news it’s hearing on the coronavirus — 62 percent told Pew that the media was at least slightly exaggerating the crisis — it could hinder efforts to stop the virus’s spread.

Check out all the latest coronavirus polling we’ve collected.

How close are we to a COVID-19 vaccine? l FiveThirtyEight