The Pew Research Center on Wednesday came out with a big report on the decline of marriage in the United States. A record 1 in 5 Americans 25 or older have never been married, up from 1 in 10 in 1960. 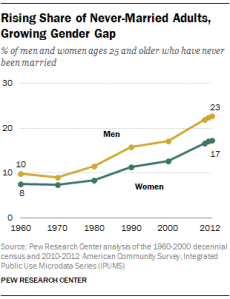 The report is full of interesting tidbits. The gender gap is widening: Men are less likely than women to get married (presumably, men are more likely to have had more than one spouse). And so is the racial one: More than a third of African-Americans 25 and older have never been married versus a quarter of Hispanics and about a sixth of whites.

The relationship between education and marriage has undergone a fundamental shift, especially for women. Women with more education used to be far less likely to get married than women with less education. Now, women of all educational backgrounds are about equally likely to get married. For men, the trend is the opposite: The best-educated men are now by far the most likely to get married. That could be at least partly the result of another trend: The long-term decline in employment rates among less-educated men could be making them less attractive marital partners. In a survey conducted as part of the study, 78 percent of women said it would be “very important” for their prospective spouse to have a steady job. 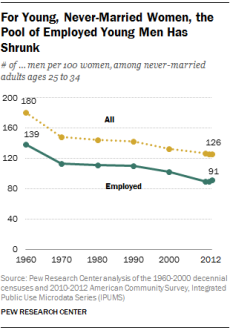 One key question is whether Americans are skipping marriage altogether or simply delaying it. The Pew researchers estimate that in 2030, a quarter of 45- to 54-year-olds will never have been married, up from 14 percent today. But that estimate is based on projections of existing trends. No one knows for sure how those trends will play out over coming decades.

Another issue not addressed in depth in the Pew report: the impact of the weak economy. The recession and slow recovery have led many young people to delay striking out on their own and likely to delay marriage as well. In the Pew survey, young adults disproportionately cited lack of financial security as their main reason for not getting married. But with recent data suggesting a hint of improvement for young people’s finances, it’s possible more of them will start walking down the aisle as well.