You might have gotten the idea from Rand Paul and Chris Christie that most Republicans don’t believe parents should be required to vaccinate their children. In fact, the opposite is true (as statements by Marco Rubio, Ben Carson, Mike Huckabee and Rick Perry suggest). The majority of people — of all political stripes — are in far greater agreement with scientists on vaccines than on other issues that scientists generally agree on.

According to a 2014 Pew Research Center survey, members of the American Association for the Advancement of Science (AAAS) hold overwhelmingly similar views on climate change, evolution, genetically modified foods and vaccines. They almost all believe that humans are causing climate change (87 percent), evolution is real (98 percent), genetically modified food is safe (88 percent) and vaccines should be mandatory (86 percent).

Among the public, it’s only on vaccines that majorities of self-identified Democrats (76 percent), Republicans (65 percent) and independents (65 percent) agree with scientists. You’ll also note that the split between Democrats and Republicans is relatively small. On all the other issues mentioned, less than a majority of at least one political group agrees with the scientists. 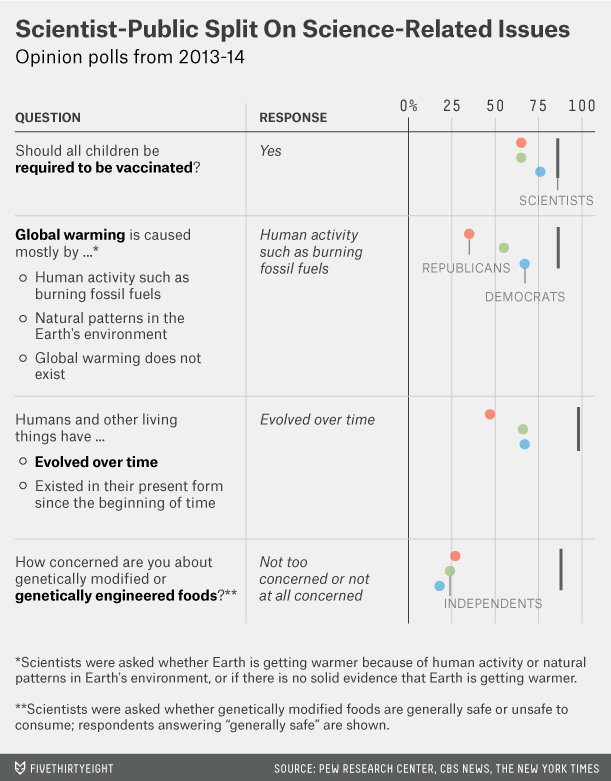 Climate change is fiercely partisan. A 2014 CBS News/New York Times poll found that Democrats are the most likely of the political groups to think global warming is caused by humans, but even the percentage of Democrats who hold this view is 20 points less than the percentage of AAAS scientists who do. Republicans are a full 52 percentage points behind scientists.

The AAAS members almost universally subscribe to the theory of evolution, but a good portion of both Democrats and Republicans remain skeptical. Republicans, at 47 percent, are 51 percentage points behind scientists on human evolution, according to a 2014 Pew survey. Some Democrats make fun of Republicans for not believing in evolution, and yet both parties have their fair share of deniers. Only 67 percent of Democrats believe in evolution.

The widest gap between the public and AAAS scientists is on genetically modified foods. An extremely low percentage of Democrats (18 percent), Republicans (27 percent) and independents (24 percent) are “not too concerned” or “not at all concerned” about genetically modified foods. More than 70 percent of each group is at least somewhat concerned, according to a 2013 CBS News survey. In this case, the different political groups all agree: They disagree with the scientists.1

Clearly, public opinion on vaccines adheres much more to the scientific consensus than it does for other important issues on which almost all scientists concur. The problem is that a good chunk of people still aren’t with the scientists on vaccines. That can, as the recent measles outbreak demonstrated, have deadly consequences.

Moreover, the near-consensus on vaccines may not last. Six years ago, there was no gap between Republicans and Democrats on vaccines. Now, there’s a small gap. As Brendan Nyhan pointed out at The New York Times, statements from Republican officials such as Paul and Christie could politicize the issue and lead to a widening of the small inter-party split on vaccines.