Scientists lament that public opinion on scientific issues is often shaped by fear and ignorance about science. A new pair of surveys, published Thursday in the journal Science, shows that there is, indeed, a large gap between public opinion and that of scientists on a wide range of scientific topics.

There was also disagreement over the cause of climate change (50 percent of the public said it is mostly due to human activity, compared to 87 percent of scientists). Here’s a full list, via Pew Research Center, of the scientific issues the survey asked about: 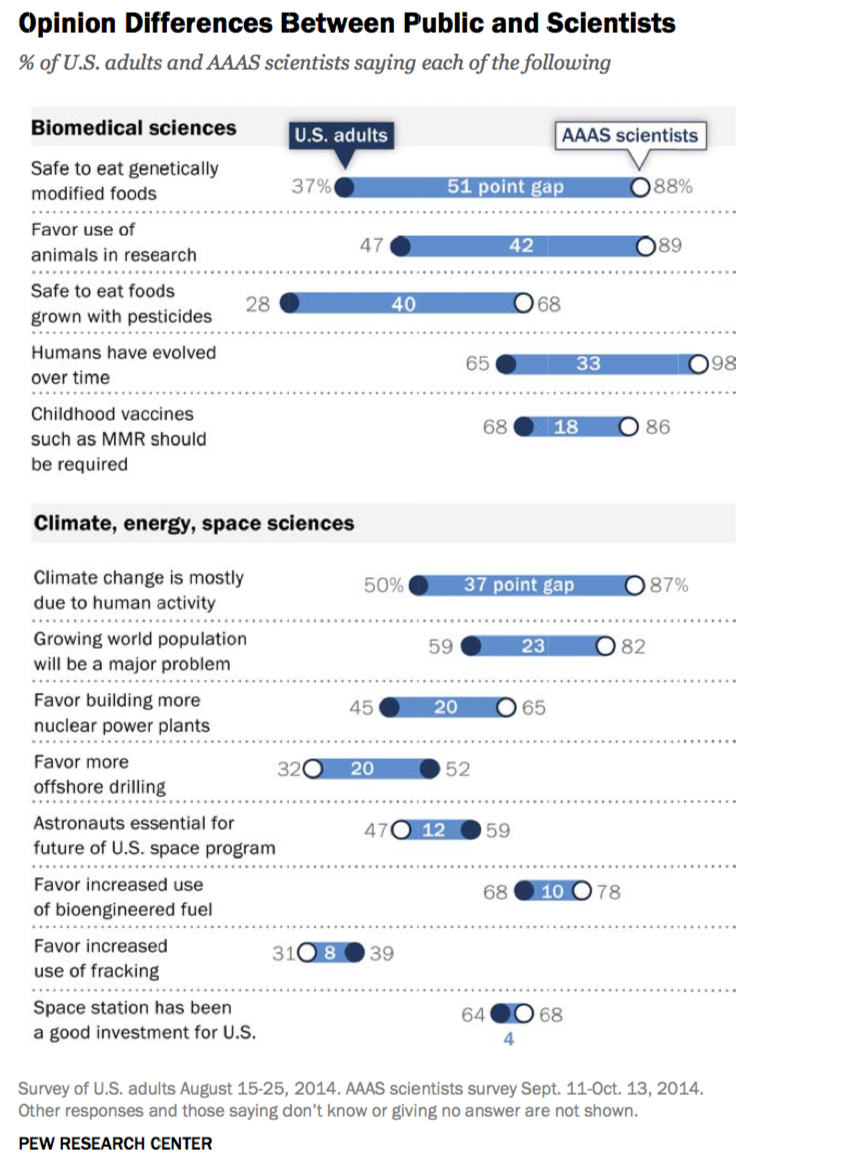 Juxtaposing the public’s view against scientists’ could imply that one is right and the other wrong. But science can’t provide hard and fast answers on all of these issues. Some of these questions — are GMOs safe? — can be answered scientifically. But others (e.g., is animal research defensible? Should we frack more?) combine scientific information with value judgments. Science can provide data on risks and benefits, but ultimately these decisions require human judgments that often involve politics and ethical considerations too. Experts, even scientists, may disagree on the answers, even when they agree on the underlying science.

Researchers involved in the surveys hope the results will inspire more scientists to speak publicly about policy issues involving science. “Science issues are increasingly civic issues,” said Lee Rainie, director of Pew’s Internet, science and technology research. in Washington, D.C., during a media briefing Wednesday. “They’re at the center of what defines the culture and the society and how people live their lives.”

But it’s important to note that the scientists who responded to the survey weren’t always commenting on issues they were expert in. Given the broad range of questions, most of the scientist respondents probably answered questions regarding issues outside of their specialty. Members of AAAS include scientists from all fields, but half of the survey’s respondents came from agricultural, biological or medical specialties.

In an editorial accompanying the report, Alan Leshner, CEO of AAAS and executive publisher of Science encouraged scientists to engage with the public, “even on the most polarizing science-based topics.” Surely, the public discourse could use more science — scientists in the survey reported that the best scientific information guides government regulations regarding land use, clean air and water and food safety less than half of the time.

But it’s important that scientists don’t simply dismiss public concerns as unscientific when they involve value judgements that may add extra considerations to policy questions. Science has shown, for instance, that pesticides can be safely used to grow our food, but food safety is only one consideration. Other issues, such as farmworker safety and land use practices, may also factor in, and implying that science provides easy answers can build a sense that scientists are elitist and out of touch with the public’s concerns. The public needs to understand the underlying science to form good judgements, just as scientists need to understand the public’s values if they’re to make good policy recommendations.

A methodological note: The two surveys were conducted by the Pew Research Center in collaboration with the American Association for the Advancement of Science (AAAS), publisher of Science. The public survey involved telephone interviews with 2,002 people from 50 states and the District of Columbia, while the survey of scientists was conducted online with a sample of 3,748 AAAS members based in the U.S.

CORRECTION (Feb. 2, 1:20 p.m.): A previous version of this article used an outdated title for Lee Rainie. He is Pew Research Center’s director of Internet, science and technology research.