As a rule, the monthly jobs report brings out two kinds of people: Econ nerds (that’s me!) and econ trolls (you know who you are). I spend a fair bit of every jobs day trying to answer good-faith questions from readers on Twitter and in the comments to my monthly write-up. But as a general rule, there isn’t much point in feeding the trolls. Life is too short.

Every now and then, though, one of the trolls finds his way off Twitter and into the pages of a major American newspaper. Like Friday, for example, when the following op-ed ran in The Wall Street Journal: “Seasonally Adjusted Jobs Numbers Offer Cold Comfort.”

It is, without exaggeration, one of the dumbest things I’ve ever read. And I read Zero Hedge. (Disclosure: I used to work for the Journal. This piece ran in the opinion section, which is editorially independent of the news pages.)

In the piece, Harvard Business School Professor Daniel Quinn Mills argues that the practice of seasonally adjusting economic data is outdated. Instead, he argues, we should focus on unadjusted data when trying to understand the state of the economy:

The U.S. economy lost more than 2.7 million jobs between the middle of December and the middle of January, but the big news from the January jobs report was that the economy added 275,000 jobs during the same period. …

January’s seasonal adjustment implies that reduced levels of employment and output will automatically return to higher levels when spring arrives. There will be nothing automatic about the return of the almost three million jobs lost. In fact, the largest declines in employment were in retail trade and professional service, neither of which is weather related.

This is so wrong that it’s hard to know where to begin. First, seasonal adjustment isn’t entirely, or even primarily, about the weather. It’s about accounting for recurring patterns, whatever they may be. Tax preparation firms hire lots of people every spring and then lay them off after April 15. Landscaping firms employ far more people in the summer than in the winter. Automakers shut down their factories each summer to change over to the new model year.

Know what else happens every year? Christmas. Far from being immune to seasonal patterns, as Mills apparently believes, the retail sector is among the economy’s most predictable industries. Every November and December, even in the depths of the recession, retailers add hundreds of thousands of workers to handle the holiday rush. And every January, they lay them off. 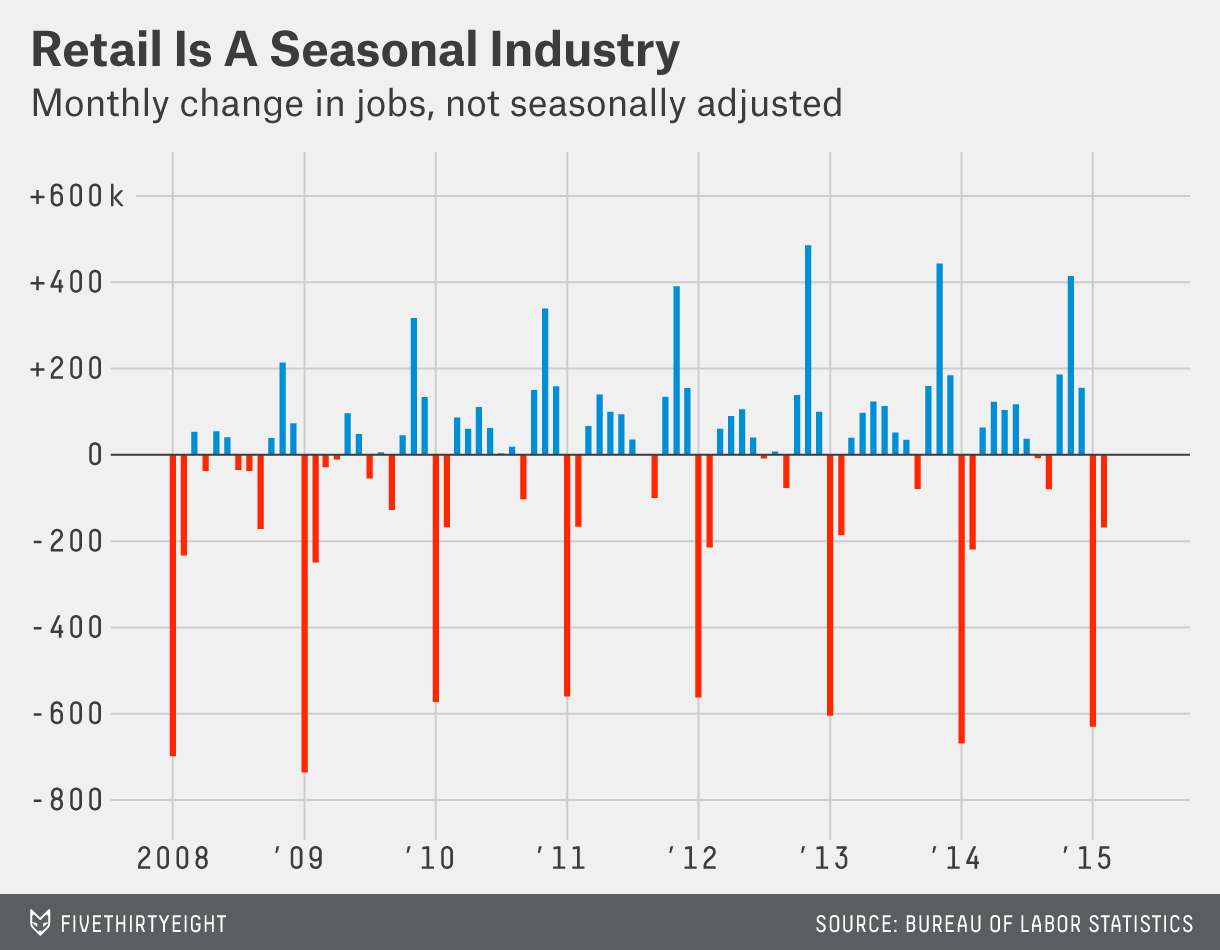 Knowing that retailers cut jobs in January, in other words, tells you precisely nothing about the state of the economy. What you need to know is whether that cut was bigger or smaller than you’d expect — exactly the question that seasonal adjustment attempts to answer.

Mills, whose Harvard website says he is “an expert on the differences between Asian and Western leadership styles,” also appears to misunderstand how the government’s adjustment formula works. He writes that seasonal adjustment made sense back when the economy was more heavily dependent on industries like manufacturing and construction but that it is no longer necessary now that the economy is less seasonal. Even if that premise is true, it doesn’t make sense: The government automatically updates its adjustment formula as seasonal patterns change.

Now, seasonal adjustment is far from perfect. Economists at the Brookings Institution have argued the government’s seasonal adjustment formula is too sensitive to one-time blips that aren’t true seasonal patterns. That mostly argues for fixing the formula, as the Brookings researchers try to do. But there’s an argument to be made that we put too much faith in seasonally adjusted figures. Indeed, I’ve often argued that we should focus less on month-to-month changes, which require seasonal adjustment, and more on less volatile year-to-year changes, which generally don’t.

But Mills doesn’t make that argument. Instead, he writes: “The [Bureau of Labor Statistics] should report both seasonally adjusted and actual figures each month.” But of course, the BLS already does this — which Mills knows, because that’s where he gets his “2.7 million jobs” figure from the first paragraph of his story.

Mills is right about one thing. Toward the end of his piece, he writes that:

Economic-policy directions are continually revised and trading decisions are made daily, not annually. So it is important to try to understand the economy’s real direction on at least a monthly basis.

What Mills doesn’t seem to realize is, that’s exactly why we need seasonal adjustment.