This month, after attackers killed four people in a kosher supermarket in Paris, Israeli Prime Minister Benjamin Netanyahu called on French Jews to immigrate to Israel. More than 6,000 already had last year through November — a greater number than in the three previous years combined.

Many articles attribute the rise in French immigration to Israel to anti-Semitism in France. Netanyahu seemed to reference this in his speech when he said French Jews “have the right to live secure and peaceful lives.” But Israel’s immigration counts don’t explain why some people are moving there, only that they are doing it.

Whatever the reason for the moves, the French migration wasn’t the largest one from Europe to Israel in 2014. And it is dwarfed by past mass migrations, most notably that of Soviet Jews in the early 1990s after Mikhail Gorbachev loosened exit restrictions. With Netanyahu’s call in mind, here’s a historical look at migration to Israel.

Jews have been moving to Israel in large numbers since well before the United Nations recognized it as a state in 1948, and Europe has consistently been the main origin of emigres. More than three-quarters of the nearly 500,000 people who migrated between the end of World War I and 1948 came from Europe, according to the Israel Central Bureau of Statistics. Since then, more than half of people to make use of the country’s policy allowing Jews to move there have come from Europe. Europe’s share spiked to 79 percent last year, thanks in part to the surge from France, though the overall numbers are well behind 1990s peaks. 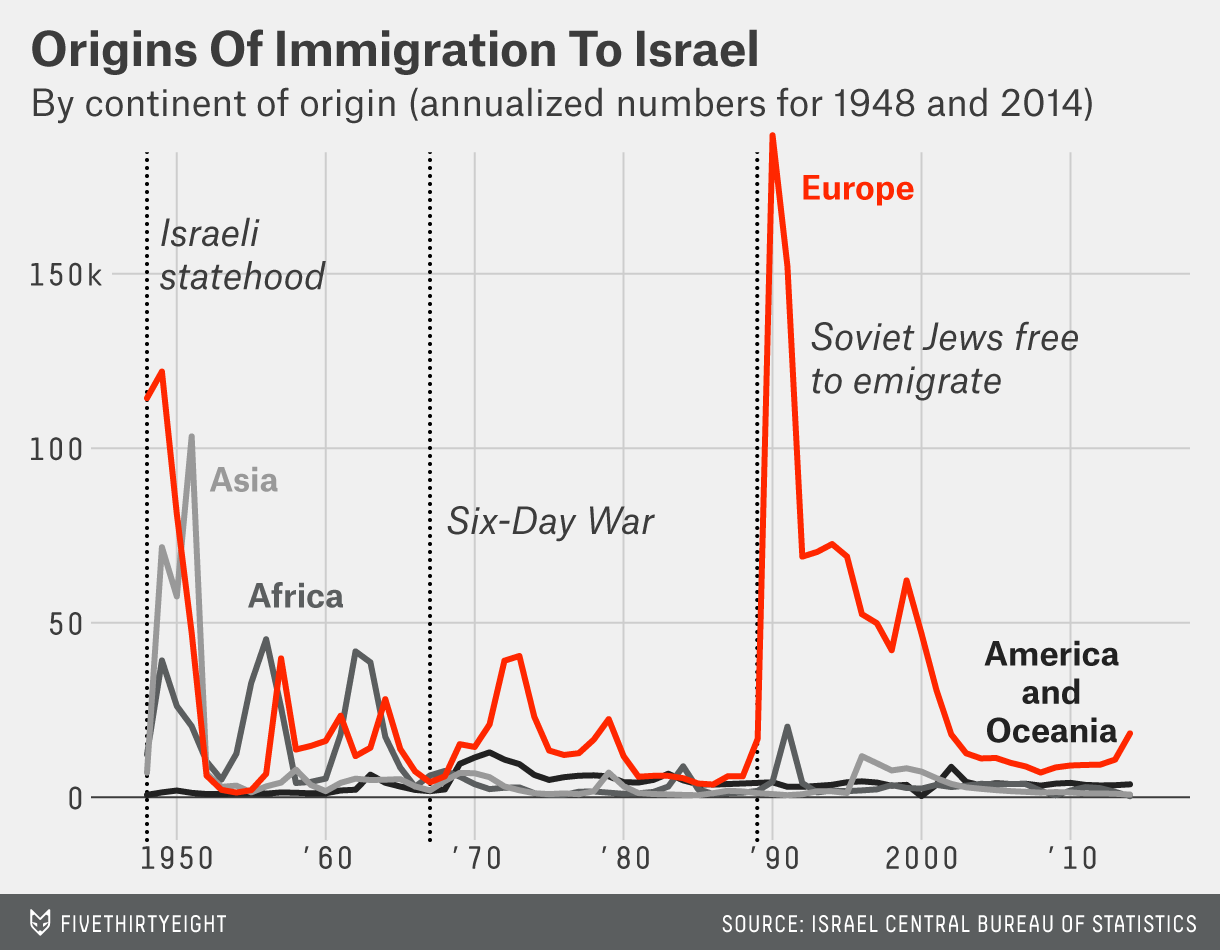 Historically, Eastern Europe has dominated the European migration to Israel. Of the nearly 1.9 million people to emigrate from Europe to Israel between 1948 and last November, the latest available date, 92 percent moved from or were born in Bulgaria, Hungary, Poland, Romania or the European countries that were formerly part of Czechoslovakia, the Soviet Union and Yugoslavia. That figure dropped to 56 percent last year — when, even after the French surge, about 50 percent more people moved to Israel from former Soviet Europe than from France. (Some older data is based on birthplace rather than country of origin. Until 1995 immigration from former Soviet Asia was counted as Europe; from 1996 it was counted as Asia. Nearly all immigrants to Israel are Jews — about 99 percent of those between statehood in 1948 and 1984, the latest available year.) 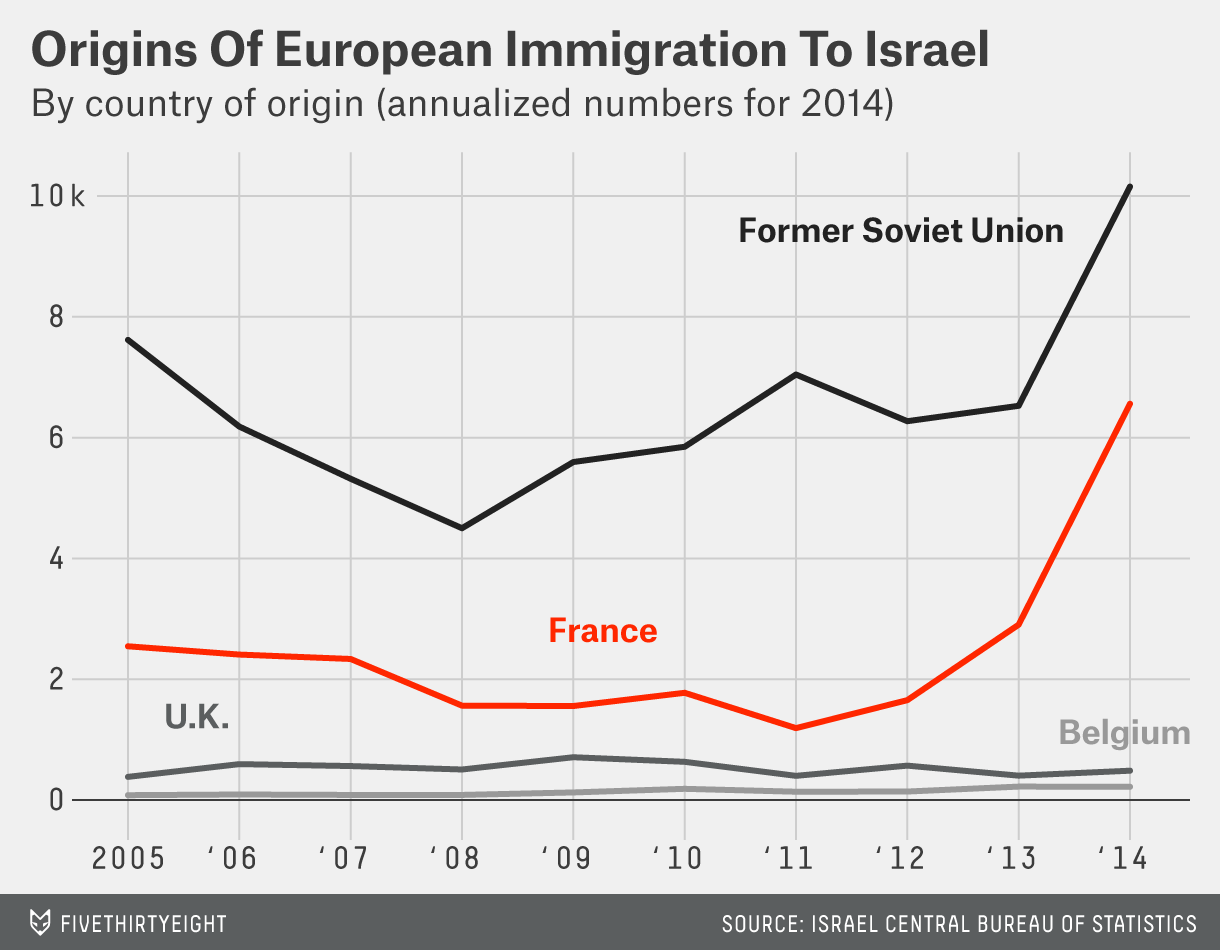 The flow from former Soviet Europe to Israel is even more dramatic when considering the size of the source population. According to 2014 Jewish population numbers published in the American Jewish Year Book 2014 and Israel’s immigration stats, about 1 in 30 Jews from former Soviet Europe at the start of the year had moved to Israel by the end of November; just 1 in 80 French Jews had done the same. The share of French Jews who moved was far more, though, than the percentage of Jews to move to Israel from any other country with one of the world’s 20 biggest Jewish populations for which Israel published immigration numbers last year. 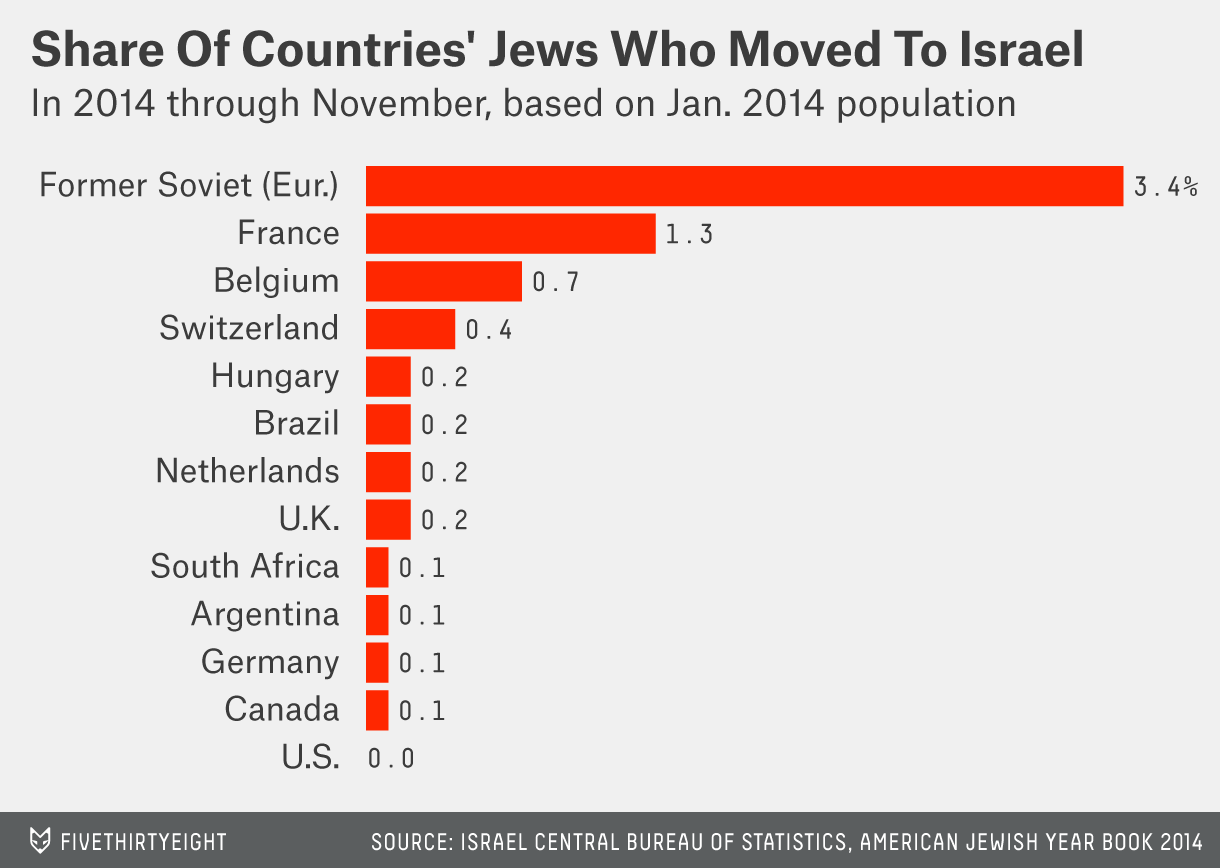 There is a two-way flow of migration between Israel and Western countries. More Jews moved from Israel to the West than the other way between 1948 and 2002, according to research by Sergio DellaPergola, a demographer at Hebrew University in Jerusalem. (Some people may be counted repeatedly if, say, they first migrated to Israel, then moved somewhere else.) 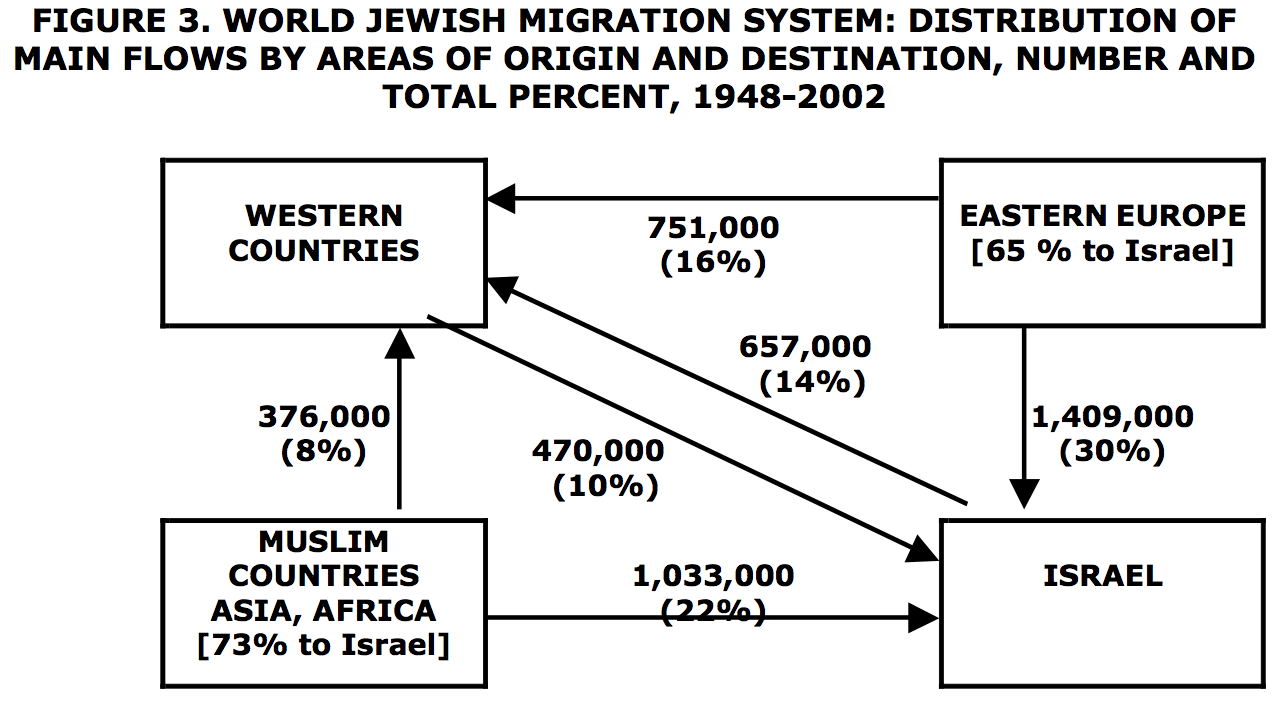