Not since the liberation of Paris from German forces in 1944 have so many people taken to the streets of France — the country’s Interior Ministry estimated that 3.7 million people attended anti-terror rallies across the country on Sunday, with 1.2 million to 1.6 million marching in Paris.

The demonstrations were organized by the French government following a series of attacks, first on the offices of the magazine Charlie Hebdo last Wednesday that left 12 dead, then the fatal shooting of a police officer on Thursday, followed by an attack on a Kosher supermarket on Friday in which four people died. The three gunmen suspected of the killings have all been linked to Islamic terrorist groups.

In a press release, the French government said the demonstrations were organized to honor the victims and to show the unity of the nation. That unity has been repeatedly emphasized in recent days amid a heightened climate of fear — fear among members of France’s Jewish community that they might again be targeted, fear among the country’s Muslim communities of misplaced reprisals, and fear among ethnic minorities that they might fall victim to attacks from those who conflate race and religion.

Some of those fears are based on experience. Religious intolerance and racism existed in France before the tragic events of last week, and we have some statistics on the scale of the problem.

The Commission Nationale Consultative des Droits de l’Homme (National Consultative Commission on Human Rights, CNCDH) is a French governmental organization that tracks, among other things, hate crimes. Its most recent report shows the number of acts and threats of anti-semitism (plotted in green) and racism and xenophobia (blue). Incidents that are Islamophobic (shown in orange) have been counted only since 2010 after an agreement was signed between the French Interior Ministry and the Le Conseil Français du Culte Musulman (French Council of the Muslim Faith, CFCM) to collect the numbers. 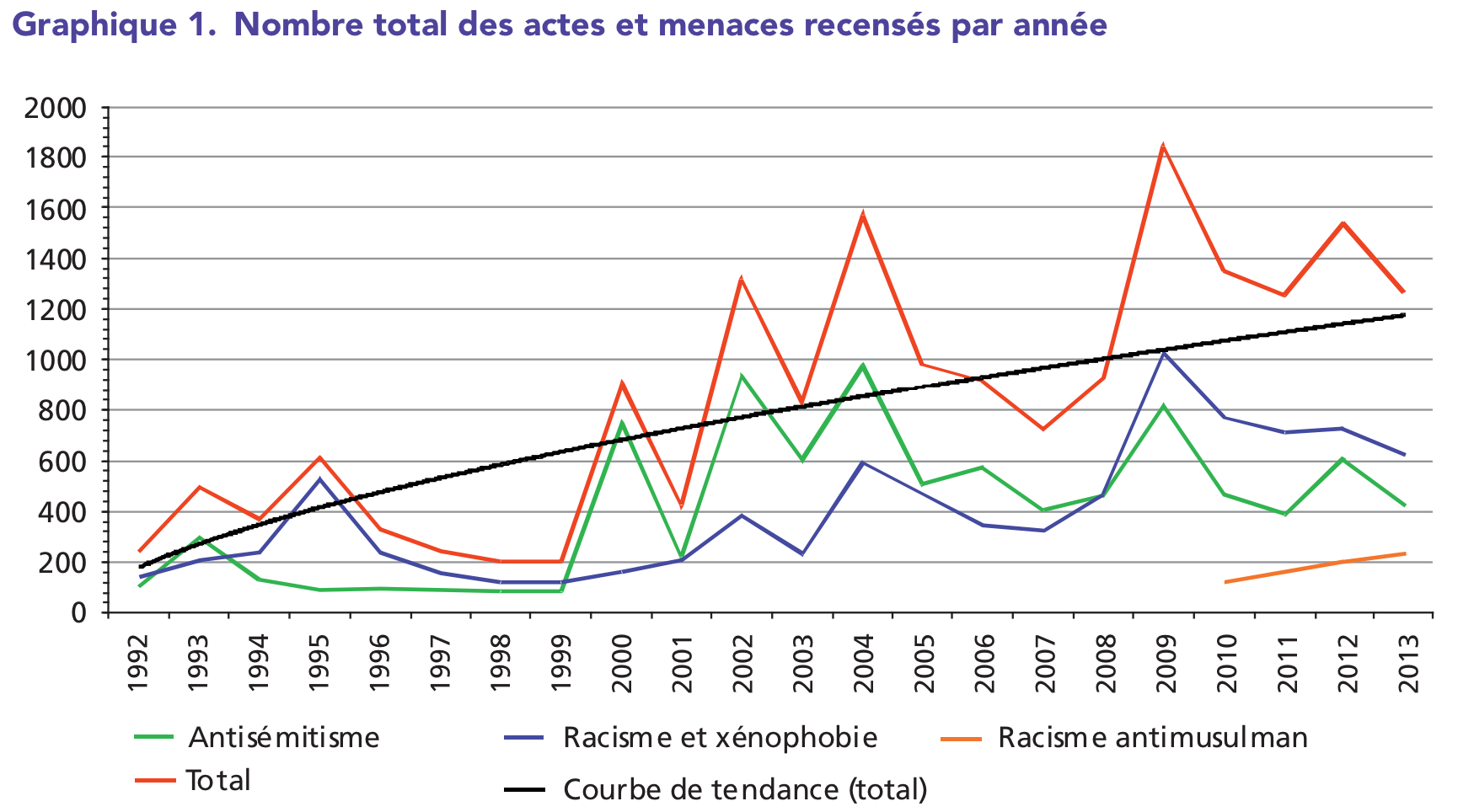 The chart shows a rise in both anti-semitic and racist attacks between 2007 and 2009, but the impression is one of considerable variation from year to year. The CNCDH reports an overall trend of a rise in attacks and threats of violence (shown in black).

Not everyone understands the difference between race and religion, and so the categories shown in the chart are not perfectly distinct. On Wednesday night, for instance, the main entrance to a mosque in the French city of Poitiers was graffitied with the words “death to Arabs.” It’s not clear whether in this case the object of hatred was a culture, a race or a religion.

As a state that declares itself secular, France does not include questions about religion on its national census, making it difficult for us to understand rates of victimization. But we can take a closer look at statistics from surveys and advocacy groups that provide a more detailed picture of two of the more pressing categories of discrimination in France: Islamophobia and anti-semitism.

In the five days since the attack on the offices of Charlie Hebdo, the French Interior Ministry reportedly received information about 54 Islamophobic attacks: 21 “actions” (grenades thrown at mosques, gun shots, an explosion at a kebab restaurant attached to a mosque, among others) and 33 threats (such as in Corsica, where a boar’s head and entrails were left outside a Muslim prayer room with a note that read “next time it will be one of your heads”). According to the French Council of the Muslim Faith, those figures are of a scale “never seen before.”

The council logged 110 Islamophobic acts and threats in the first nine months of 2014, compared to 158 for the same period in 2013. The numbers are based on complaints made to police forces.

Those numbers don’t tell the full story, though — not least because they depend on whether victims of Islamophobia are willing to speak to the police.

Public opinion surveys might offer some further insight into how Islamophobia is changing in France. In the spring of 2008, Pew surveyed 754 adults in the country about their views on various religious groups. Thirty-eight percent of respondents said they had a “somewhat” or “very” unfavorable opinion of Muslims. That figure was slightly higher than in previous years — in 2006, 35 percent said they had an unfavorable opinion of Muslims in 2005, and in 2004 it was 34 percent.

In 2014, Pew commissioned a new survey, this time posing a question to 1,003 French adults with a slightly different wording. Rather than asking about attitudes toward religious groups in general, the survey asked specifically about attitudes towards religious groups living in France. This time, 27 percent of respondents expressed a somewhat or very unfavorable opinion of French Muslims.

Three-quarters of French respondents believe Islam is an “intolerant” religion, incompatible with the values of French society, according to a January 2013 poll by the French newspaper Le Monde and the market research company Ipsos.

Rabbis in France have described the country’s Jewish population as “tormented with worry” after Friday’s attack on a French supermarket. On Monday, 5,000 police officers had been sent to Jewish schools and religious sites amid security concerns in addition to 10,000 troops deployed across the country.

The nonprofit Service de Protection de la Communauté Juive (the Jewish Community Security Service, SPCJ) publishes an annual summary of anti-semitic attacks reported to the organization and to police precincts in France. Its latest figures show that in 2013 there were 105 anti-semitics acts and 318 anti-semitic threats. Taken together, the number of threats and acts in 2013 was lower than in 2012 (when there were 614 total incidents) but higher than in 2011 (389).

In September 2014, Fondapol, a French think tank, posed a range of questions that might reveal anti-semitic attitudes to 1,005 French people age 16 and over. The choice of wording in the survey is interesting. One question asked “when you learn that someone you know is Jewish, what reaction do you have,” to which 91 percent of respondents said “nothing in particular,” 3 percent said “I like them” and 3 percent said “I don’t like them” (the rest refused to answer). However, 21 percent of respondents said they would prefer to avoid having a Jewish president, 14 percent a Jewish mayor, 8 percent a Jewish doctor and 6 percent a Jewish neighbor.

CORRECTION (11:58 a.m.): An earlier version of this article mistakenly said that racism and xenophobia are shown in the chart in red when they are in fact shown in blue.