When Mike Huckabee announced this past weekend that he was leaving Fox News, he signaled a lot more than just his personal presidential ambitions. Huckabee’s move suggests the 2016 Republican nomination fight is starting in earnest. At least half the field is likely to take shape in the next eight to 10 weeks. That may seem early, but it’s fairly typical.

Previously, I collected data on when candidates announced they were running for president in primaries without an incumbent running since 1972, focusing on the top tier of candidates (see the previous article for how I defined the top tier). An interesting pattern emerged. The first serious candidate who formally declared with the Federal Election Commission (FEC) or formed an exploratory committee didn’t tell us much about the timing of the other candidates’ announcements. But the timing of the second top-tier candidate’s announcement was more revealing; in all but one of these primaries since 1972, at least half the field of contenders who made it to the Iowa caucus declared in the two months following the second candidate’s announcement.

Of course, Huckabee and Bush haven’t officially declared with the FEC, so we’re comparing apples to oranges. But in the current era of PACs and Super PACs, a candidate can start raising a lot of money even when he hasn’t formally declared. Bush has begun doing just that. And since becoming an official candidate is less pressing than it used to be, Bush and Huckabee’s more informal moves may signal the bona fide start of the campaign. 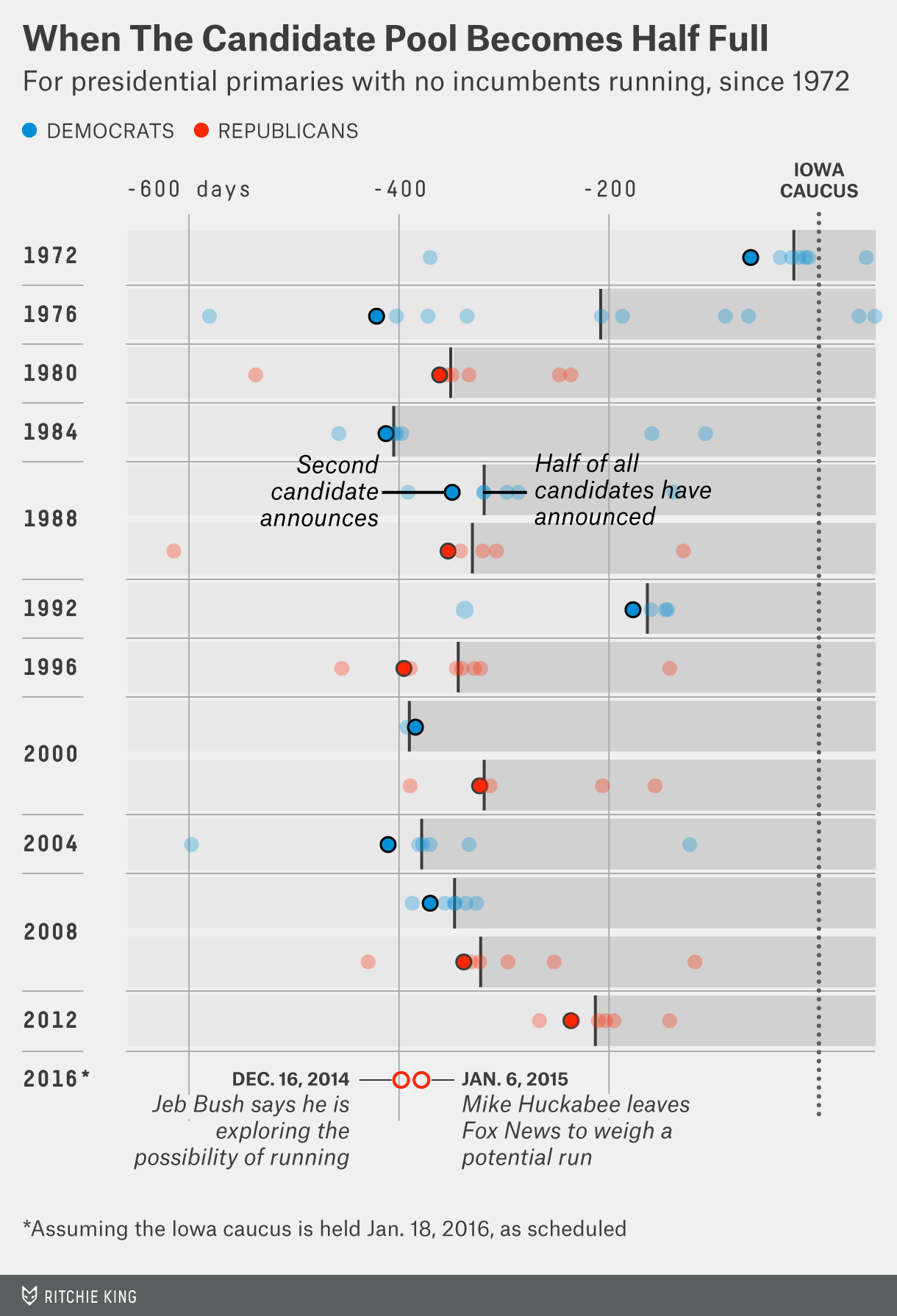 The one exception to this trend occurred way back in 1976, when candidates were still adjusting to the idea that voters and not party bosses would choose the nominee.

Why is it the second candidate and not the first who begins the march of declarations? This year’s events offer clues. When Bush announced he was exploring a run, we weren’t sure whether he would have what it takes to run a serious campaign in the modern era. Bush might have just flamed out and showed nothing, which would have allowed other candidates to keep their powder. In the few weeks since Bush’s announcement, though, he seems to have had little problem raising money and forming the precursor to a campaign apparatus.

That is, Bush is gobbling up limited resources. He is hiring staffers and wooing the biggest donors.

It’s possible other candidates will wait until Bush and Huckabee formally declare. Or, Bush and Huckabee could back out. But even without the formal declarations, it seems that other candidates don’t want to wait too long before getting in the race for fear of falling behind. The Washington Post has reported that New Jersey Gov. Chris Christie may enter the race by the end of January. Christie reportedly moved up his schedule because he believed Bush was gaining too much of an edge in building a campaign. The Post also said Sen. Marco Rubio of Florida is also going to make a decision on 2016 relatively soon. And Wisconsin Gov. Scott Walker is reportedly making moves.

Others may wait longer, but history suggests not much. The 2016 Republican nomination campaign has begun, and it’s likely to reach full swing in the next couple of months.