This content was paid for by Degree and created by the ESPN advertising department. The FiveThirtyEight editorial staff was not involved in the creation of this content.

It starts with 68 teams in mid-March and, over the course of the following three weeks, grows into a sporting spectacle that captures the imaginations of basketball fans everywhere.

What is less apparent is the extent to which fans go to support these teams, hoping their enthusiasm pushes them through round-by-round. We often use the term “home court advantage” to refer to the boost that fan energy can provide towards a team’s chances of success. But what happens when the game is played on neutral ground? Furthermore, in a championship game betwen the top-seeded Tar Heels vs. the No. 2 Wildcats, what gives a team the edge to emerge victorious?

Executing a first-ever analysis – Degree Deodorant, an official corporate partner of the NCAA, zeroed in on college hoops’ the biggest stage, to unearth the reciprocal relationship that fans have with the outcome of the game. The results uncover an interesting narrative.

Using cutting-edge Lightwave bioanalytics technology and custom sensor wristbands, Degree equipped fans from each of the Final Four teams to capture data in two primary categories – 1) movement and 2) audio level. Collectively, these metrics would indicate just how excited, tense, and passionate these fans were.

Movement was measured across three axes in terms of g-force: each axis was then combined into an aggregate movement number using the root mean square formula.

Audio level was measured using several decibel meters (to track the level of loudness) throughout the fan sections.

Both metrics of movement and audio level in the arena were recorded 10 times per second i.e. 10 hertz – ensuring an extremely precise measure behind the data1.

Fan reaction over the course of a game spans many forms. When looking at excitement level specifically, Degree looked to decipher what type of plays draw the highest levels of engagement. While the saying goes “defense wins championships,” we learn that the clear indicator for fan engagement lies on the offensive side of the ball – where the three most captivating plays are the slam dunk, 3 point shot, and field goal made. As expected, a free throw attempt sits at the end of the spectrum given the stoppage in play, when fans typically use that time to digress from the action. 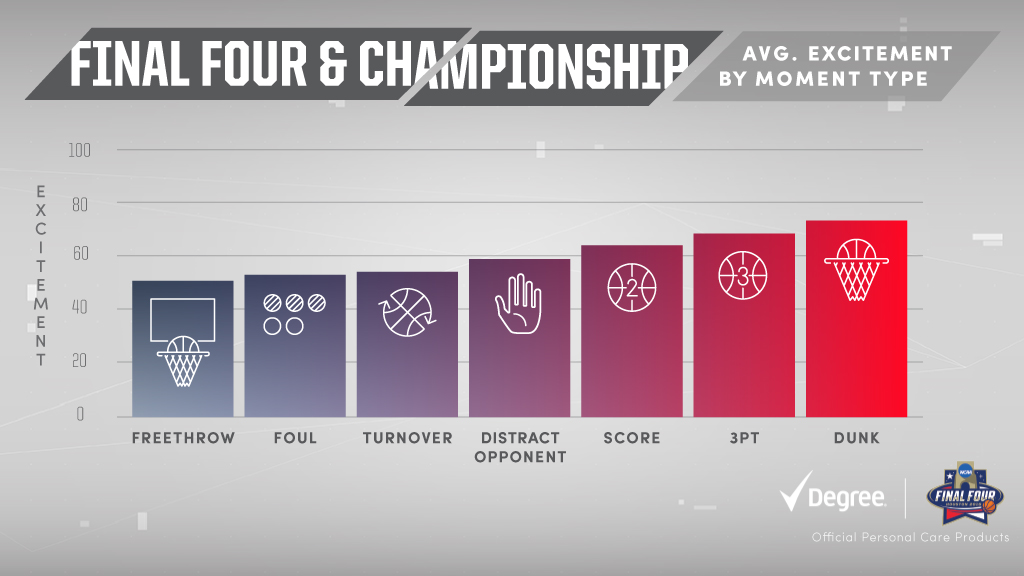 Heading into Final Four weekend, according to ESPN’s Tournament Challenge, UNC was the presumed favorite to advance to the championship game in 26 percent of brackets, while Villanova was only picked in 6.5%. A quick look at the numbers behind the respective fan bases revealed another telling stat – in both of the Final Four games, the teams whose fans sustained the highest level of excitement emerged victorious, with Villanova leading the way at a decibel level of 86.5. The Villanova crowd seemingly knew how to rally in support of their squad, even in favor of the more local Oklahoma team led by a national player of the year candidate. 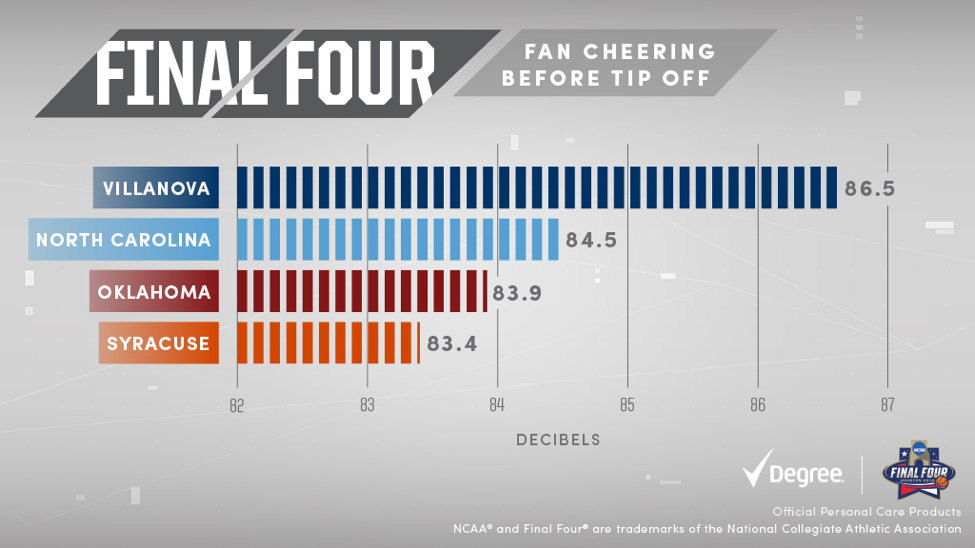 While a difference of 3dB from top to bottom may not seem that significant, it’s important to note how decibels are measured. Because this metric is evaluated on a logarithmic scale, each increment on the axes increases by a factor of 10 rather than equal increments, so it’s actually covering a much larger range than the individual numbers suggest. Similar to how earthquakes are measured. In this case, an increase of 3dB is a doubling of audio power. It becomes very clear that Villanova fans were ready to see this tournament through to the end.

On Monday, April 4, the NCAA tournament crowned a new champion with Villanova’s electrifying 77-74 win over UNC, earning the Wildcats a second national title and first under its current head coach. The game itself lived up to its billing, with the country’s two best teams going toe-to-toe all the way to the final buzzer at NRG Stadium in Houston.

From tip-off, it was evident that things would be competitive all night, in contrast to the teams’ respective semifinal blowouts. Villanova fans carried the momentum from the Final Four, and stormed out the gates with an excitement level of 77.94 compared to UNC’s 57.28. The fan frenzy provided the back drop to a sloppy start to the game, as the teams combined for four turnovers and only five field goals in the first five minutes.

North Carolina soon put its stamp on the game via the three-point line, hitting 5 of their first 7 threes, including a trio from the same corner. This was a welcome sign for Carolina, considering the Tar Heels had a difficult time shooting from long range against Syracuse in the Final Four, missing their first 12 3-point attempts.

The following chart reflects the more sustained periods of fan excitement from UNC fans as the threes continued to pour in: 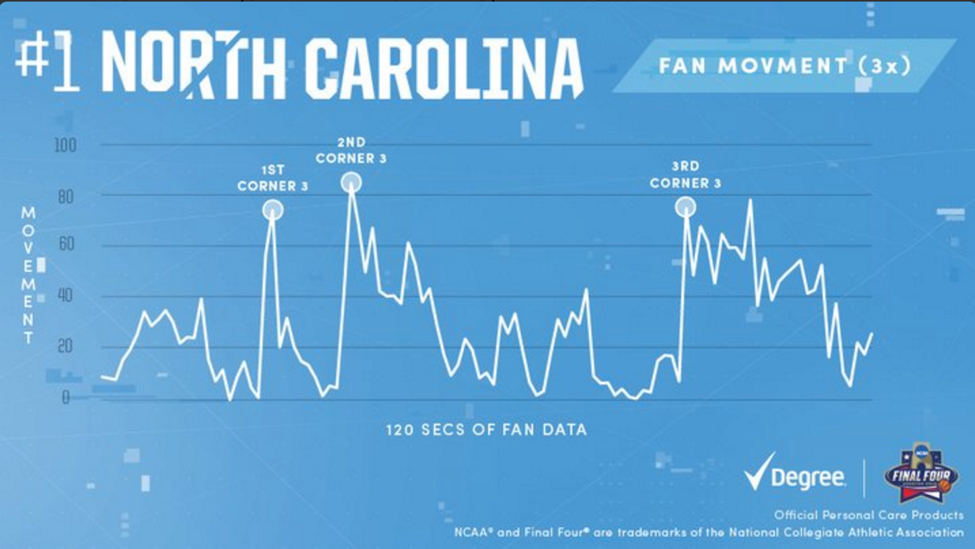 The first half concluded with UNC leading 39-34, thanks largely to the Heels’ sharp shooting. The Wildcats went into the locker room with their heads held high, having shot 58% from the field, with one of their best players missing an extended period of time because of foul trouble.

The second half opened with a couple of UNC turnovers that allowed the Wildcats to pull within reach, knotting the score at 44-44 with 14:08 left in the game. Up to that point, UNC had held the lead for nearly 10 minutes of game time.

This surge represented a defining moment for Villanova and its fan base. A beautiful back-door cut pass from the Wildcats’ senior guard led to an emphatic dunk from his backcourt teammate. In what would be his only field goal from the game, he sure knew how to make it count. The Wildcat fans immediately erupted in celebration, hitting their highest excitement level of the game and overtaking UNC fans in the ‘passion’ metric – with an average g-force of 1.86g.

From that point on, many in the arena could feel the collective sentiment that this was Villanova’s championship to win. 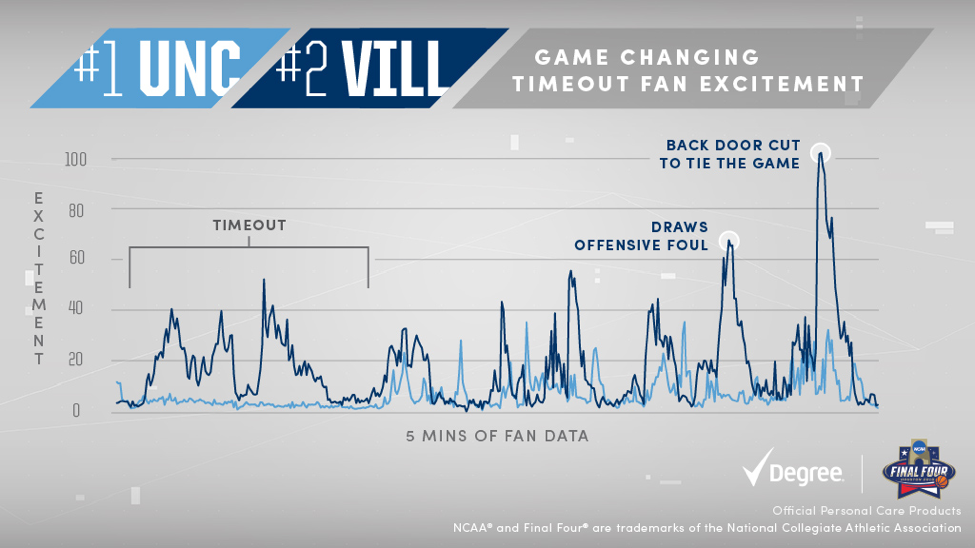 Looking at the chart above, we see an interesting development with the timeout that preceded this series of game-changing plays. Villanova fans could sense the tide turning even before the action unfolded, and sustained that energy while the UNC fans were virtually silent. It’s moments like these where we start to understand how fans can serve as a driving force behind positive results vs. simply reacting to the events on the court.

The charge only continued from there. Villanova retook the lead at the 12:45 mark with a score of 49-46, and grew that to double digits with less than 6 minutes left, thanks to strong three-point shooting.

Before Nova could stamp its legacy, the Tar Heels responded in a big way after the eight minute media timeout. A 12-3 Carolina run cut the deficit to 70-69 with exactly one minute on the clock, setting the stage for an unbelievable finish. After an exchange of baskets, the Villanova lead stood at 3 with 13 seconds left and the ball in UNC’s hands. Thirteen seconds that would soon go down in college basketball lore.

UNC’s point guard took matters into his own hands, jumping into the air beyond the 3-point arc, contorting his legs, careening past a Villanova defender, and hoisting a last-gasp attempt at the rim as he descended back on the court. Splash. 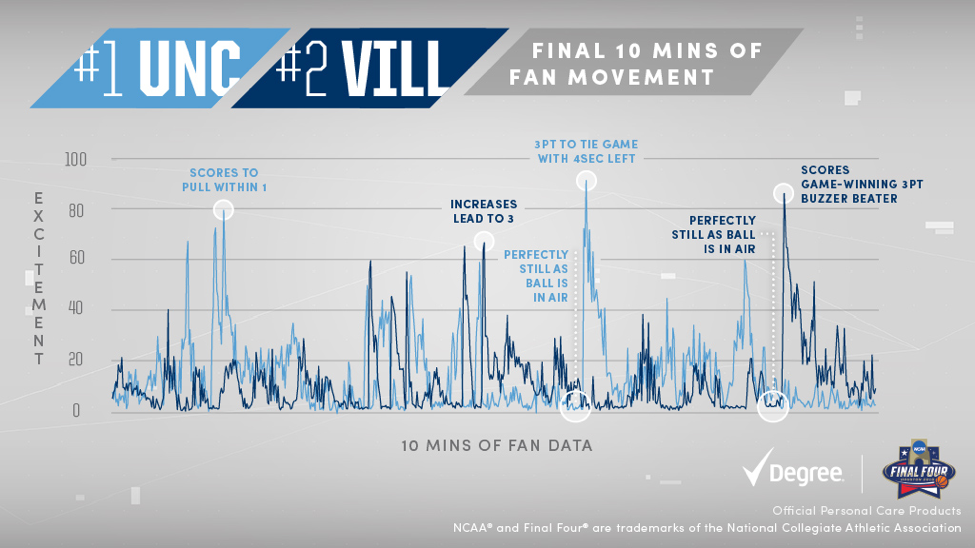 The entire arena erupted – fans screaming, jumping up and down, hugging each other. When we look at the real-time data from Degree, the game-tying three reach even higher stratosphere:

The fans reached an average g force of 2, which is 30% more than the force you’d feel accelerating from 0 to 6 in 2.5 seconds in a high speed vehicle.

At that point, overtime was all but guaranteed. But Villanova had other plans. The Wildcats immediately called timeout to set up their next play and their head coach showed no hesitation in making the call: Nova. It was the Wildcats’ go-to set with less than five seconds remaining, one they had practiced routinely throughout the season.

The ball started in the hands of Villanova’s senior guard, who raced up the court in preparation for the final play. Just as he entered shooting range, he dished the ball to a trailing teammate, who pulled up and let the ball go from deep. Fans from both sides fell completely motionless as they watched the ball sail through the air. The backboard flashed red and the ball swished through the net – GAME. NOVA.

The thunderous roar that shook the stadium reached an average g force of 1.9g, nearly a mirror image of the fan reaction from UNC’s three pointer just four seconds prior. Furthermore, when we look at the audio level, the data from Degree unveils perhaps the most staggering metric of them all:

From the moment the game winning shot was released, the decibel level jumped from 77.5 dB to 92.5dB – at this peak, if sustained, could lead to hearing loss

When we look back on the opening weekend of the tournament, highlighted by 13 first-round upsets and 10 wins by teams with double-digit seeds, the championship game between UNC and Villanova concluded a fitful ending as one of the greatest games in college basketball history.

The Wildcats had won the National Championship. Their fans undying support – from the regular season to the championship game – proved to be a significant difference maker. And their faith was rewarded by virtue of celebrating in the aftermath of victory.

Degree Deodorant’s in-stadium activation at the Final Four attempted to prove just how exactly a fan base can contribute toward a team’s overall chances of winning. No wonder Villanova’s confidence was riding high even before the final shot went in: they knew all along they had some of the best fans in college basketball supporting them.

Visit the Degree MotionSense Lab. Follow @DegreeMen and @DegreeWomen for content updates and announcements, and use the hashtag #EveryMoveCounts to join in on the movement conversation. For more information on Degree Deodorant visit DegreeDeodorant.com.