This content was paid for by Degree and created by the ESPN advertising department. The FiveThirtyEight editorial staff was not involved in the creation of this content.

As the madness of March reaches into April, we begin to see just how, exactly, the passion of college basketball fans reflects the action on the court.

Degree Deodorant, utilizing Lightwave technology, a bioanalytics company, continues to facilitate new research as part of the Degree MotionSense Lab – an online hub that provides advanced movement analytics of athletes, music artists, and fans. Utilizing connected sensor devices to analyze physiological and emotional indicators, the next study will measure fan movement and noise levels at the Final Four and Championship games in real-time, then run the raw data through special algorithms to calculate how excited, tense, and passionate college hoops fans truly are.

To establish a baseline for the Final Four and National Championship, Degree partnered with the University of Florida to measure the fans during an in-conference game on March 1.

Here’s how the game was analyzed:

Movement was measured across three axes in terms of g-force each axis was then combined into an aggregate movement number using the root mean square formula.

Audio level was measured using several decibel meters (to track the level of loudness) throughout the Florida fan section.

Both metrics of movement and audio level in the arena were recorded 10 times per second i.e. 10 hertz – ensuring an extremely precise measure behind the data1.

Florida’s point guard came up with a huge steal on the defensive end, but that was just the first moment in a string of events that whipped the The Rowdy Reptiles into its biggest frenzy of the night. He took off the other way on a fast break, eventually streaking into the paint and throwing down a rim-rocking slam dunk.

The physics behind that key first-half play are impressive in themselves. But most notable is the impact that the steal, break and dunk had on the 10,684 screaming orange-and-blue-clad fans that packed the University of Florida’s O’Connell Center.

This specific play came at a defined point in the game that led to the crowd’s longest period of sustained excitement of the night. Previously, an announcer or writer covering the game might say that the dunk simply cut Florida’s deficit to four, and drew the “oohs and ahhs” of the crowd. But now, thanks to Degree Deodorant and the MotionSense Lab, we can learn a little more about the measurable elements that help create this “frenzy”, along with other noteworthy moments from the game that speak to the reciprocity that fans have with the action on their home court.

As with every American sporting event, the story of this game’s fan experience begins with the Star Spangled Banner. On this night, the Florida faithful were patriotic and respectful, remaining still for more than two minutes during the National Anthem, easily the longest stretch of stillness throughout the game. During that time, the crowd movement hovered around the absolute stillness level of .57g-force2. Quite a feat for an arena packed full of fans of both teams. 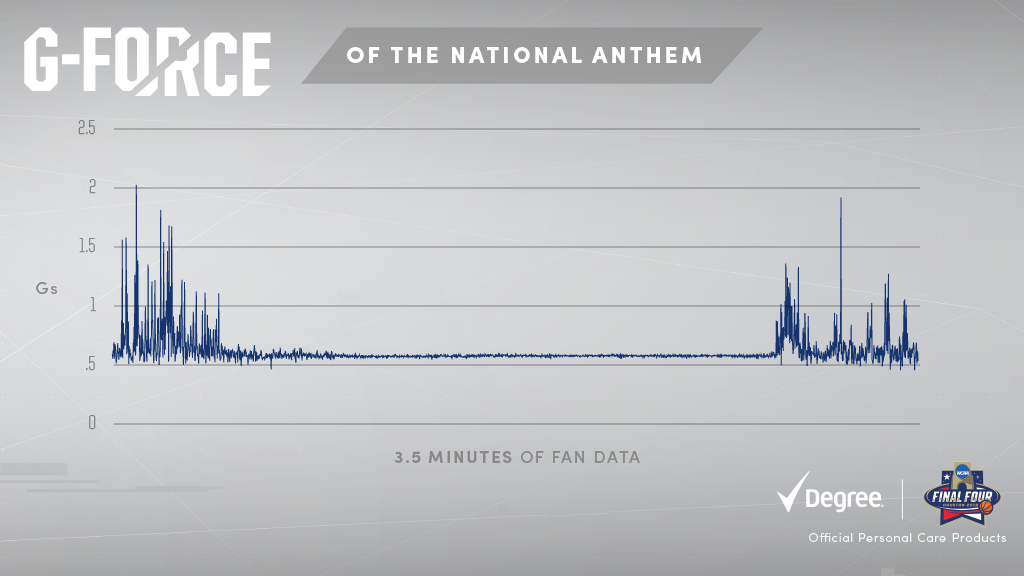 Immediately following the anthem, however, this shot up to as high as 2.2g during a full minute of extended applause – a vivid signal of the anticipation surrounding the start of the game.

While the National Anthem provided the longest period of sustained stillness, the longest period of unrelenting excitement came near the end of the first half. As mentioned in the introduction, the Florida dunk with 1:27 left in the first half cut the Gators’ deficit to four at 34-30. After falling behind by as many as 14 to a despised conference rival, the momentum shift was met with wild enthusiasm from the home crowd. 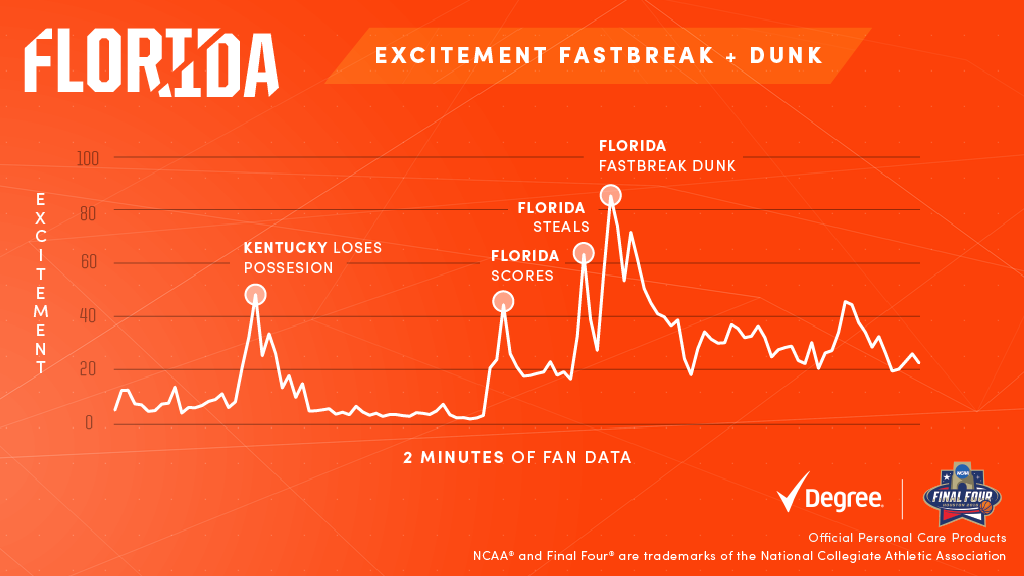 The Florida fan’s excitement levels reached a peak first-half mark following the dunk, the highest mark in a five-minute stretch of constant noise and movement. With Florida surging and the opponent on its heels, the visitors called a timeout, allowing the crowd ample time to voice its delight. One super fan set the bar a little higher, rocking out at a whopping 7.5 g following the slam.

The Florida fans maintained their excitement on the defensive end, as the opponent missed a 3-point attempt. The Gators cut the deficit to two 10 seconds later, but that was as good as it would get in the first half. The visitors answered with a dunk of their own with 35 seconds left before the break, putting a stop to the extended run of Florida excitement.

Once again, a Florida dunk provided the most exciting moment of the second half. This time it was a their imposing center that provided the rim-rocking theatrics, throwing down less than four minutes into the half to cut the Gators’ deficit to three at 41-38.

The crowd responded with maximum excitement:

Reaching a peak level of 97, for the first and only time in the game 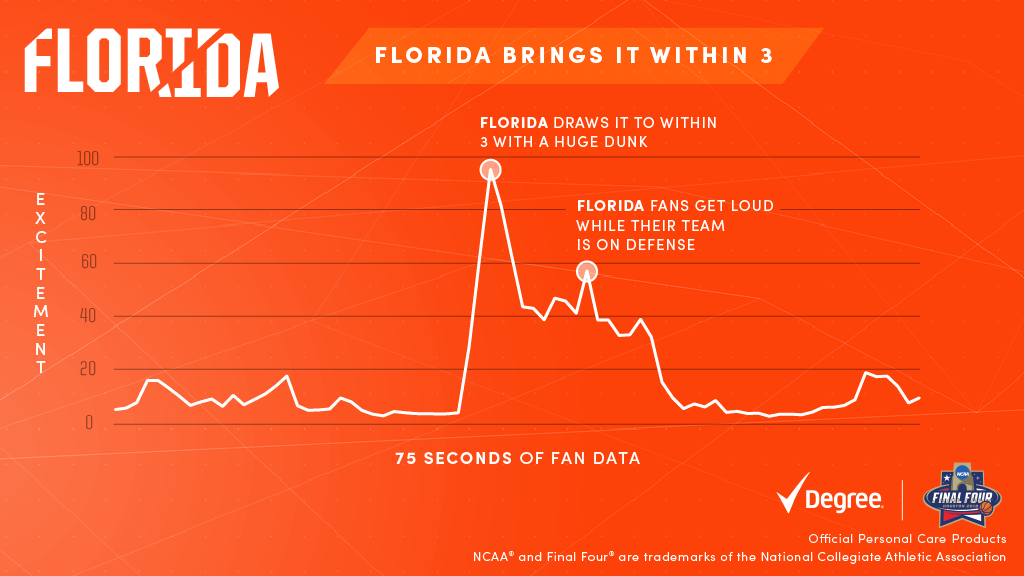 While the overall energy was higher at this point than after the key dunk in the first half, the crowd momentum was not as sustained. Instead of calling a timeout, the visitors answered just :19 seconds later with a jumper that pushed the lead back up to five. That basket sparked a 7-0 run which extended the lead to 10 and put the Florida fans back into their seats. Florida never made another sustained run en route to an 88-79 defeat.

Beyond the Box Score

The Lightwave study discovered a couple other findings worth noting, as they indicate that college basketball fans have a true understanding of how they impact the game.

Understanding Both Sides of the Ball: 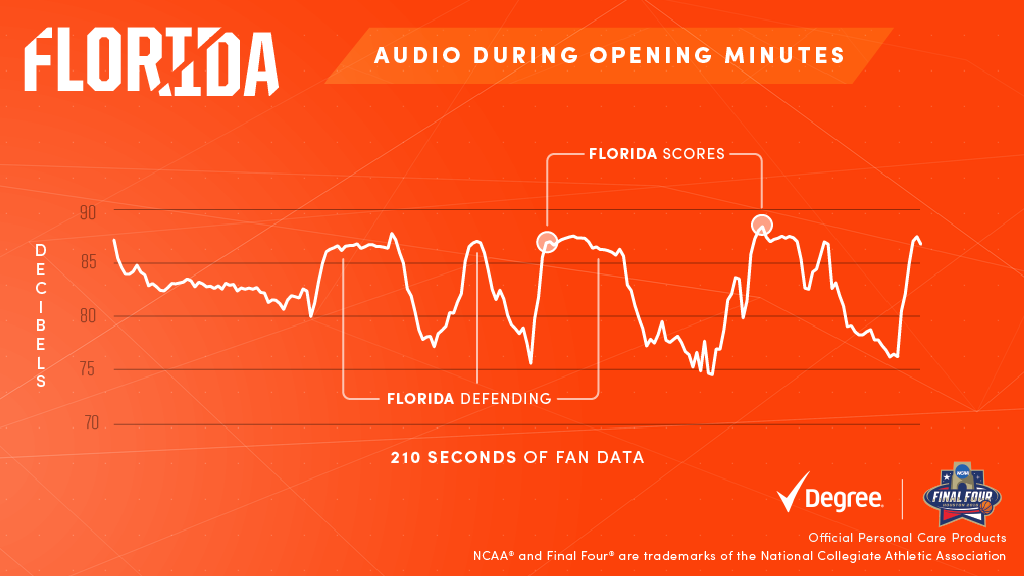 The first is the fans’ relationship with offense and defense. Looking at the first few minutes of the game, when crowd engagement is high, the arena reaches 88 decibel3 whenever Florida scores. They also come close to this level when the Gators are on defense. The sound level dips way down when Florida has the ball. This suggests that the fans know when to quiet down to let their team’s offense go to work – that is until they score, when the crowd erupts. Similarly, they turn their vocal chords loose when the opponent has the ball, hoping to distract things and make play-calling more difficult.

The other fact worth noting is the Gator Chomp. When opposing teams head to Gainesville, they know they are not only taking on a quality Florida team on the floor, but will have to deal with the rabid Gator fans in the stands. As the Lightwave analytics prove during big moments throughout the game, the crowd turns to its signature rallying cry to help the team along. 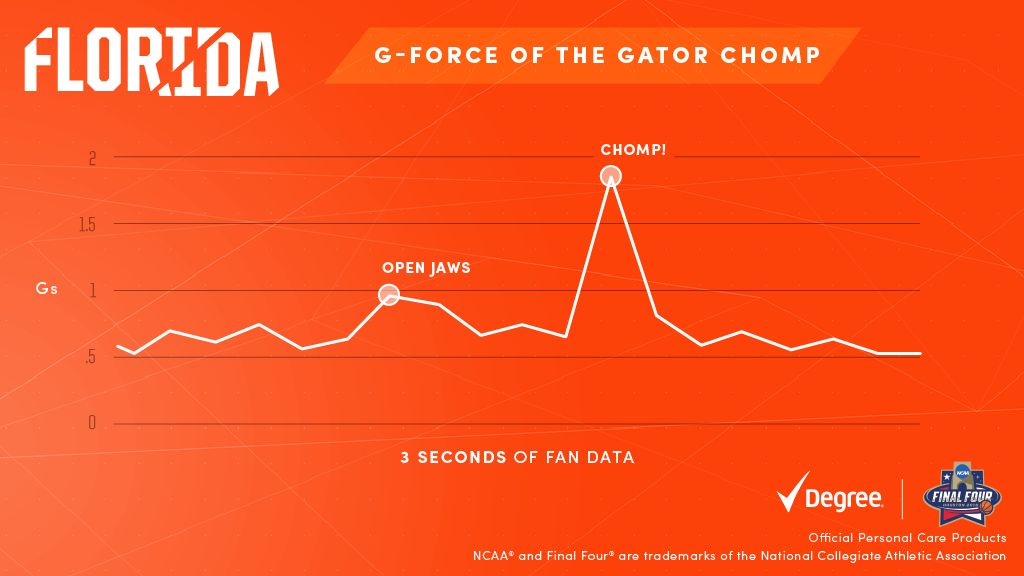 As fans open their “jaws,” the average exertion is about .9g. When the “jaws” shut down in a great chomp, we rocket up to 1.8g. The amazing thing is the uniformity with which the crowd performs the action. The crowd launches into each clear peak as a single unit, doing everything they can to back their beloved Gators.

Despite the final result, the findings extracted from this Florida game revealed core insights about the kinetic relationship fans have with their teams as it relates to the energy & flow of the game. As we gear up for the Final Four and NCAA Championship, Lightwave & Degree Deodorant will take the next step with its Degree MotionSense Lab to measure fans from both teams in each of the games and report real-time stats on the emotional state of each fan base as the game progresses.

The inclusion of fans of both teams, on the most anticipated stage of college basketball, will take the experiment to the next level. Stay tuned to find out how the drama will unfold.

Visit the Degree MotionSense Lab. Follow @DegreeMen and @DegreeWomen for content updates and announcements, and use the hashtag #EveryMoveCounts to join in on the movement conversation. For more information on Degree Deodorant visit DegreeDeodorant.com.